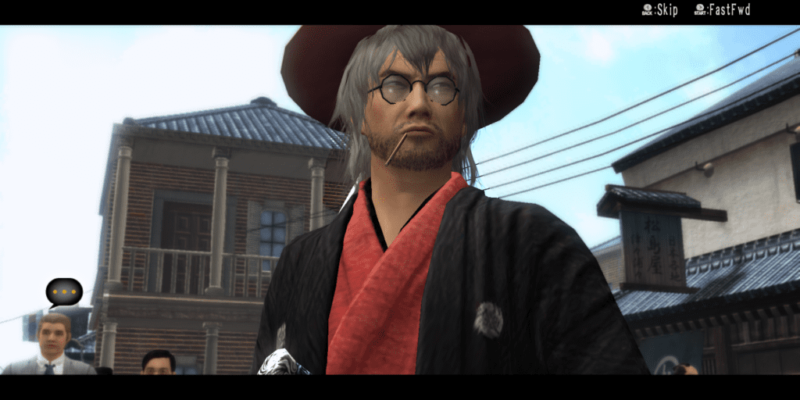 Primarily known for bringing Japanese titles like Agarest to the PC, Ghostlight would seem to be the ideal choice of company to introduce the first ever Way of the Samurai game to the Steam masses. There’ll be a full review coming once I’ve finished this highly replayable title a couple more times, but for now this piece will look at the surface technical aspects of Way of the Samurai 4.

It’s not a mega-spectacular extra-bells-and-whistles PC version by any means; but it does get a lot of things right (and a couple … not so right.) Let’s have a look at what’s on offer.

Actually, before that, you might have to reinstall the PhysX package from the ‘_CommonRedist’ file inside the game’s folder tree. For some reason Way of the Samurai 4  refused to work until I’d done that.

Anyway, on with the settings. 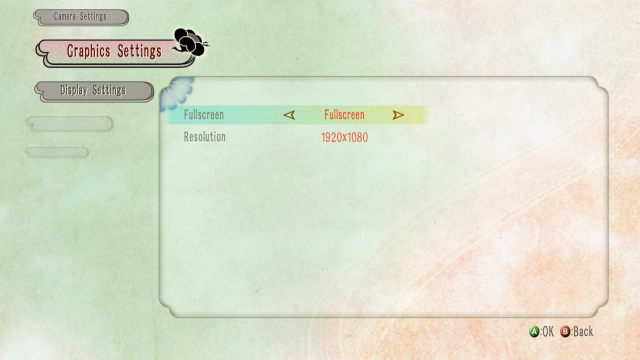 This won’t take too long to describe.

Right, well, the graphics settings page is a little bit bare-bones, but keep in mind this was originally a 2011 PS3 game. You’ll be seeing PS3 textures no matter what, and the Way of the Samurai series isn’t exactly a glittering graphical showcase to begin with. It has its charms, but they’re more to do with the number of ridiculous things your character can use as headgear than high-resolution kimonos.

What we do have is an option for Fullscreen or Windowed mode (no Borderless Fullscreen I’m afraid,) and resolutions that will go as far as you can push them. If you’re willing and able to downsample on your GPU, Way of the Samurai 4 will support arbitrary resolutions and merrily go to 4K and beyond. So that’s good stuff.

Is there keyboard and mouse support? 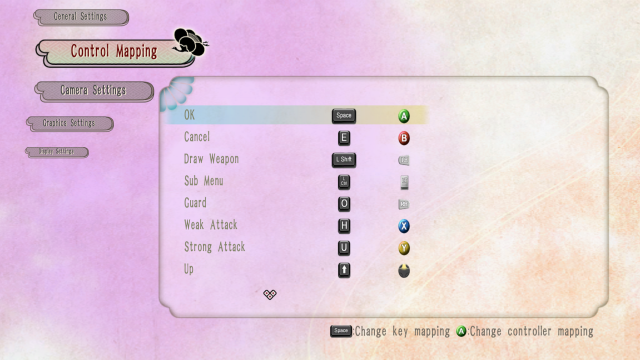 Your first clue that something weird is going on is ‘O’ and ‘H’ being bound to anything important.

To … an extent, yes. The mouse works in all the menus (hooray,) and as you can see from the image above all the keybindings can be redefined and customised at will.

But, and this is a pretty major omission, all of the in-game control is keyboard only. There’s no mouse control for the camera, or, say, in combat. You can’t bind your attacks to the mouse buttons or anything.

For me, that pretty much kills the mouse/keyboard (effectively just keyboard) controls as an option. They’re present. You can use them if you want to revisit the old days of pure keyboard control for some reason. But a gamepad is very, very much the preferred option here. I’ve no idea whether fuller mouse control will eventually get some support, or if this control scheme was dictated by restrictions within the game code, but the end result is that pad-play is a virtual necessity. That’s a real shame for those who don’t own one, especially as a proper mouse/keyboard (mouse controlling the camera, weak and heavy attacks on each button and the middle one for guard) would probably have worked fairly well.

I mean, look at the default control bind for a forward kick. 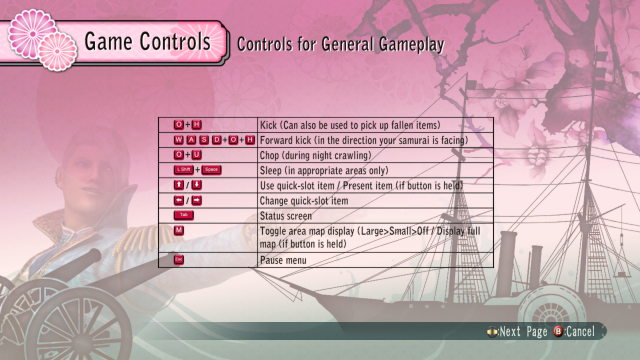 When you select ‘Manual’ on the main menu, this is what happens.

WASD for the direction, in combination with O and H? Even with both hands on the keys that’s a little bizarre.

While the mouse won’t be handling any of the camera controls, Way of the Samurai 4 does at least have some pretty helpful customisation options in that area. 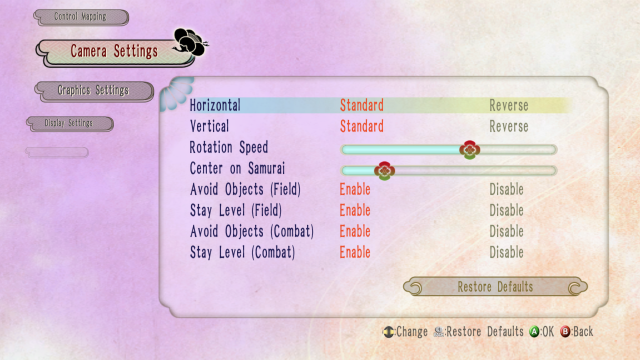 I’m not totally sure what all of these mean yet, but I still appreciate the options.

I’ve already put the rotation speed slider to good use (upping it,) and may well experiment further with the in-combat options once I’m more familiar with it.

So, we’ve addressed the fact that Way of the Samurai 4 on PC is going to look pretty much the same (texture-wise) as the PS3 version, but can manage far, far higher resolutions and realistically requires ownership of a gamepad.

Time for what some will consider to be the worst news: there’s a 30fps lock.

Before anybody moves to clap Ghostlight (or porting partners Laughing Jackal) in irons and gets a lady to torture them with a carpet-beater, this is presumably a hard-coded limitation. I’m entering the land of speculation here, but I doubt Acquire’s Way of the Samurai engine was created with 60fps (or up) in mind, and it’s quite likely that trying to force such a thing will break other aspects of the game. It tends to be stuff like the physics which go all wonky in cases like this.

A 30fps lock is not ideal, but it may have been a choice between that or not having Way of the Samurai 4 on the PC at all.

Having played it on PC for quite a while now, I can safely say it’s a game that as many people and platforms as possible should have access to. 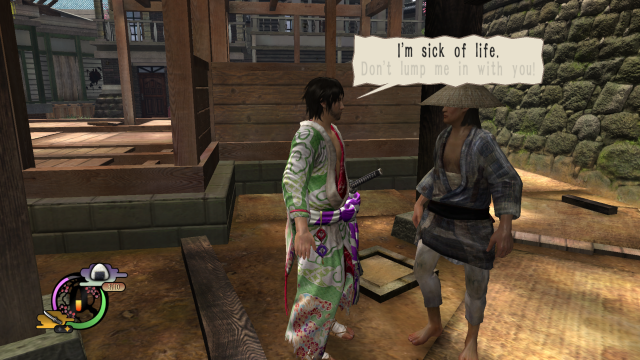 The silver lining to this FPS business is that the frame-delivery seems exceptional. Obviously it’s not going to defy the laws of videogame motion to magically appear as smooth as 60, but the 30fps in Way of the Samurai 4 (which I don’t think I’ve seen drop at all on this i3-2100 / 8GB / 2GB 7870 box of mine) is definitely more pleasant to play than, say, GTA V on PC capped at 30 with the half-Vsync option.

In addition, the loading times between inner-town and countryside zones are practically instant. Another bonus of the PC version.

It may sound like I’m going a little soft on a title that has a 30fps cap and poor mouse/keyboard control support. But there’s a significant difference between a botched port like Batman: Arkham Knight (where a lack of resources and publisher pressure to get something out of the door ‘on time’ were pretty clear,) and a surprise release of a four year old PS3 title that was never really intended for a PC release.

The unexpected chance to even play Way of the Samurai 4 on PC means I’m prepared to put up with a few things. A 30fps cap is one of those. 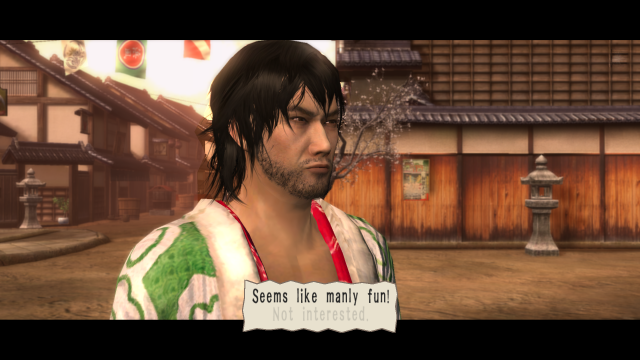 It is, my friend. It truly is.

Mind you, something a bit weird might be going on with the in-game Depth of Field effects. Whenever I alt-tab out of the game and return (something this port can handle, which is nice) the DoF becomes much stronger, and actually more closely resembles the PS3 original. It then vanishes again between loading zones.

Here’s a comparison with two shots from the same place. The first is how the game usually looks, the second is what happens when I alt-tab out and back in to it. 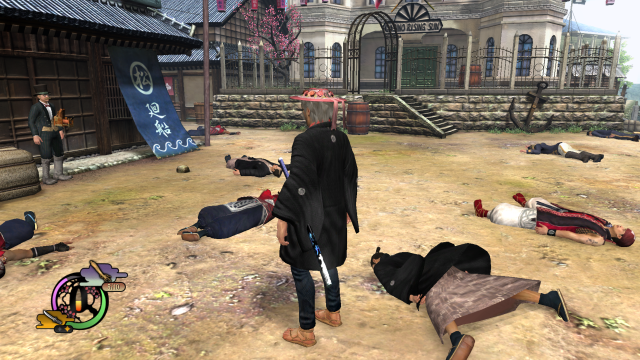 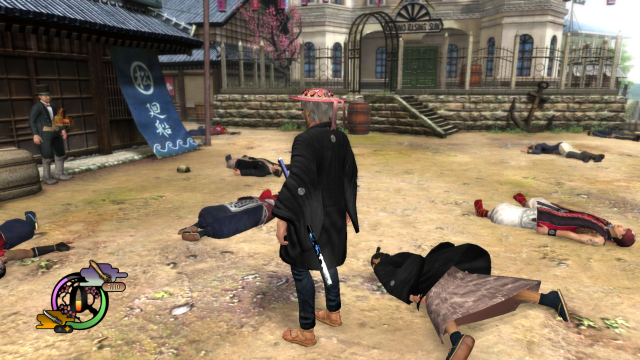 I much prefer it without the stronger DoF effect, so this ‘bug’ (if it is one,) actually seems quite beneficial.

Above and beyond the technical stuff, the game itself is wonderful. A bizarre mix of the absurdity of Deadly Premonition and the campy dialogue and weapon collect-a-thons of Dynasty Warriors, with branching paths to rival Alpha Protocol. The 1850s town of Amihama is your samurai’s own sandbox, in which you’re free to pursue alliances with one of the three competing factions, or just go and do your own thing.

Doing your own thing can mean dressing up like Blood on the Tracks era Bob Dylan and harassing every civilian you see. Or running strange errands for a guy under some carriage tracks. Or conspiring with some ultra-nationalists in a cave. Or sassing a government official in the middle of his big speech. Or failing to communicate with British people because the language school isn’t open yet (but it can be, if you manipulate events correctly.)

It’s great, and I’ll be enthusing more about it in a full review later this week. 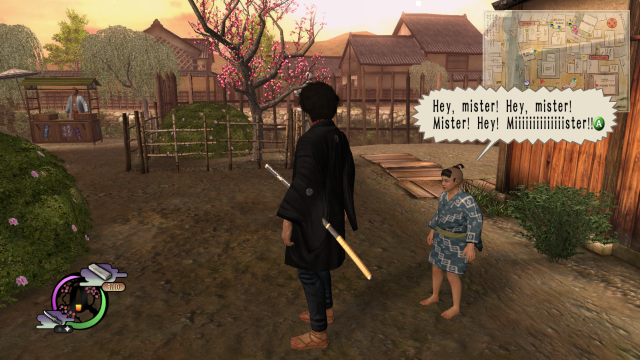 I said LATER this week, kid. It’s not done yet.

Arriving six months later than originally planned, it’s safe to assume that Ghostlight and porting partners Laughing Jackal ran into a few more issues than they were expecting. Early beta testers were reporting regular crashes, which I’m pleased to say seem to be entirely absent from the current, pre-release Way of the Samurai 4 build (I’ve managed about 8 hours without a crash after sorting out the initial PhysX snag mentioned above.)

The only thing that I feel falls outside the area of “well, yes, that’s understandable given this game’s provenance,” is the bizarrely minimal mouse support. DSfix/GeDoSaTo’s own Durante doesn’t consider the 30fps cap to be a huge deal, and, given the circumstances and the implementation, I wholeheartedly agree.

The PC version of Way of the Samurai 4 offers (much) higher resolutions, a solid (albeit capped) frame-rate, and much-reduced loading times over its console counterpart. It’s a stable, straightforward port with constraints that largely seem tied to things that were out of the coders’ hands. Those without a gamepad will probably have to sit this one out, but everybody else can now enjoy one of these cult titles on PC.

Way of the Samurai 4 will be available on Steam from 23 July.