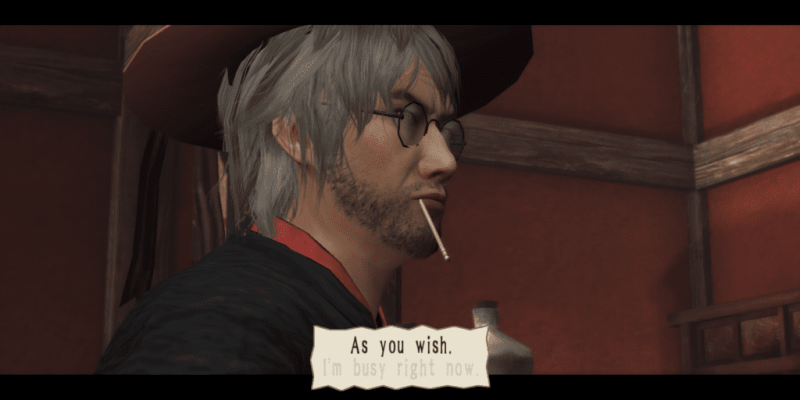 Those who were enlightened enough to enjoy Obsidian’s Alpha Protocol will find similar delights in this title’s cutting-edge commitment to branching storylines and reactive dialogue. If, instead, you prefer to find enlightenment in throwing rubber boots at passers-by, curiously aggressive eating animations, and being able to accept quests with lines like “sounds like manly fun!” there’s plenty to enjoy as well.

Think of it as a series of alternative, absurd takes on Yojimbo, where sometimes the main character just fancies robbing a sushi store, or gripping his lucky parasol as he saves the day/terrorises some beggars.

Way of the Samurai 4 is an exceptionally odd game.

Originally released for the PS3 in 2011, PC users have the people at Ghostlight to thank for bringing this installment (the first one ever on PC) over to our platform. I’ve already written pretty extensively about the port over in this separate article, but here’s the short version: you need a gamepad, the 30fps cap is unfortunate but tied to the engine (and is at least smooth and stable,) the resolution goes as high as you fancy, and the loading times between zones now barely exist.

With that covered I can get on with explaining how Way of the Samurai 4 hits so many of the things I love to see in videogames.

Player agency (or ‘being able to fuck about’ if you want the more straightforward terminology) is the big one. Having direct control over a character is something games inherited from pen and paper RPGs, and inevitably encourages the average player to experiment with how far this ability extends. Almost everyone, for example, has used an important NPC’s head as a crowbar drum kit during expository sequences in Half-Life 2.

While I’ve heard that it slightly dials back on player agency from prior games in the series (in terms of being able to kill any important character at any time,) Way of the Samurai 4 is nonetheless designed specifically around letting your character do pretty much what they fancy.

Try greeting everybody you meet this way. It’s fun!

You can side with one of the three town factions (the Shogunate, the ultra-nationalist Prajnas, or the newly arrived British consul) if you wish, and get a unique story and ending(s) for each of those. But you don’t have to. The entire game takes place across a period of five days, each of which is divided into a day, evening and night-time segment. ‘Main’ missions happen at specific points in the day, and progress the story when you take them. However, you can also choose to progress time by sleeping, and ignoring faction missions entirely.

If you like, you can even finish (well, ‘finish’) the game in record time by arriving in town on a boat as normal, then immediately asking the boatman to take you away from this dreadful place.

A more traditional first play-through of Way of the Samurai 4 is likely to take you three or four hours. Maybe more, as it’s hard to predict how much dicking around a given player will do. That first ending, though, is just the beginning. On a completed ‘run,’ you get to carry over all of your equipment and fancy clothing to a new game. Time loops around, and you find yourself arriving in Amihama. Except this time you have a better idea what to expect, should have a better sword, and may also have turned into a woman (since that’s one of the first things you can unlock after a successful completion.)

Other new faces, clothing and weapons can be purchased with Samurai Points, awarded post-credits at the end of every play-through and based on your proficiency in various areas.

Or at least until someone knocks my hat off. Then I’m going home.

The more often you go through the game, the more knowledge of its somewhat esoteric systems you’ll acquire, and the faster you’ll be able to complete a run. Your aim might be to explore the quest-lines of a different faction, to earn a bunch of cash for new outfits and weird accessories, or maybe to perfect a new fighting style.

There are a bountiful abundance of fighting styles (more than eighty in total,) each one with a slightly different move-set. With so many to find there’s obviously a bit of move overlap, but each weapon has plenty of styles to select from, no matter whether you wind up as a classic katana-wielder, a more exotic spear user, or a martial-artist. Guns and dual wielding enter the equation at a later date too.

Way of the Samurai 4’s combat system is largely a one-on-one affair. When you’re attacked by a group of enemies, they’re still kind enough to go after you one at a time in traditional movie fashion. No matter what fighting style you adopt, you’ll be using a combination of light and heavy attacks, along with blocks and dodges. There’s also a neat ‘push/pull’ system, which allows you to catch an enemy off balance if you adopt the correct counter-stance.

Don’t expect a fluid and polished sword-dueling simulator out of this (it’s not a title that screams big budgets.) But if you’re prepared to handle an occasionally unreliable camera and the fact that sometimes you might be fighting while stood on a bed or something equally bizarre, there’s a decent amount of depth to be found. With a half-decent weapon, the easier difficulties can be overcome by learning how to dodge and spam powerful moves. That won’t work in harder modes, which can sometimes finish you off in a single hit.

It’s not janky, this is just the patented BedBalance combat feature.

Way of the Samurai 4 is pretty up-front about its basic mechanics, but leaves a great deal else up to player discovery (or, more likely, stumbling across this information in a guide or forum somewhere.) On our most recent podcast, fellow PC Invasion writer and WotS veteran Tim McDonald told me it was possible to create a custom fighting style by locating a blank book and bringing it to the town Dojo. This was completely new information to me, but great to learn.

Certain methods of advancing the plot in interesting ways, like simply refusing to speak when offered a dialogue option, or drawing your weapon in the middle of NPC conversations (both of which are open to you as choices the majority of the time,) can realistically be found through experimentation. Others, like the fact that Amihama has a crime rate which persists between play-throughs and is directly influenced by player actions, are a whole lot more obscure. Sleeping outside gives the whole neighbourhood a bad reputation, apparently.

I mean, I guess it’s more of a torture mini-game, but that’s a fine line.

Way of the Samurai 4 is a game which very much gets by on cleverly executed ideas, flexibility of action, and outright silliness, rather than super-expensive production values. The vast replayability (thanks in part to a structure with many branches,) in combination with an unmatched level of player agency are its greatest triumphs; aided by a campy, offbeat tone that does much to encourage a sense that this world is meant to be messed about in. As someone who craves player freedom and appreciates ridiculous dialogue, being at last able to play one of these cult titles on PC is a real delight.