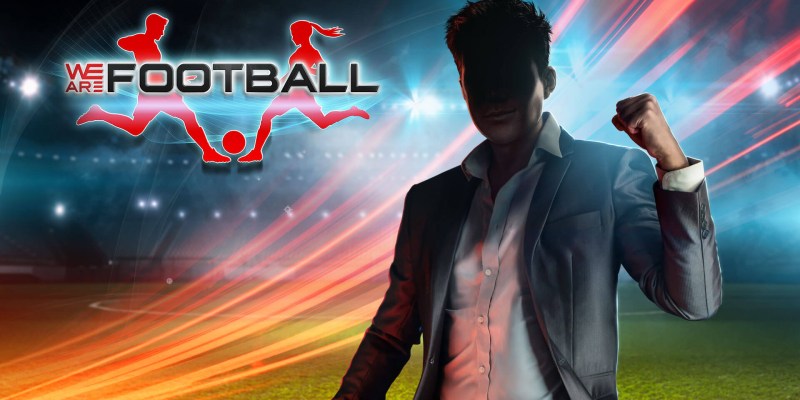 The football simulation sub-genre has been monopolized by Football Manager for a long time. The lack of meaningful competition has led to Football Manager growing stale and failing to make enough substantial improvements for some time. Most attempts to challenge Sports Interactive’s management series are made by small indie companies that don’t have the resources to compete. However, We Are Football is a little different.

We Are Football is a new football management series published by THQ Nordic. The company is behind several popular games you may have heard of, like Wreckfest, Biomutant, and Darksiders. This makes We Are Football the first direct competitor to Football Manager backed by a major publisher since FIFA Manager 14. But can this succeed where FIFA Manager failed?

It’s important to understand that We Are Football is not Football Manager. Sports Interactive’s Football Manager opts for a detailed, simulation approach where those less involved in football could easily get lost. In contrast, developer Winning Streak Games has put together a more streamlined, easy-to-digest experience. 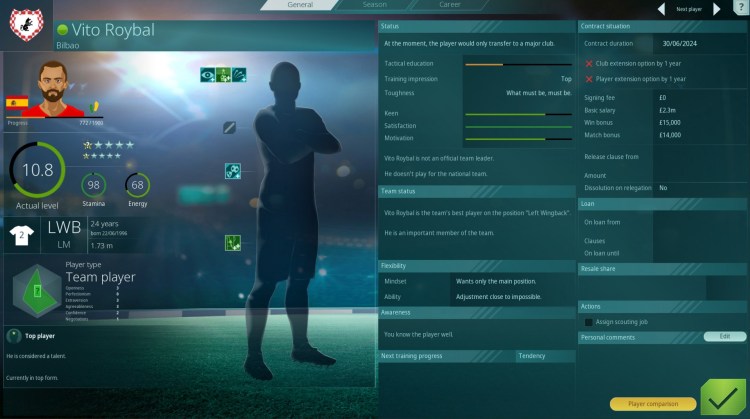 Technically, Football Manager also has a ‘Current Ability’ value for each player, but it can only be seen via the editor. In We Are Football this ability value is accessible and visible on every player’s information page. This makes transfers and scouting simple and more akin to something like FIFA career mode than a dedicated sim like Football Manager. Yet while everything is easy to understand, We Are Football fundamentally lacks the depth that genre fans are probably looking for.

Although, comparing We Are Football to FIFA may be unfair. FIFA‘s career mode is designed in a way that just about anyone can be good at it. Even if Winning Streak Games’ attempt isn’t as complicated as Football Manager, it certainly has more going for it than FIFA. 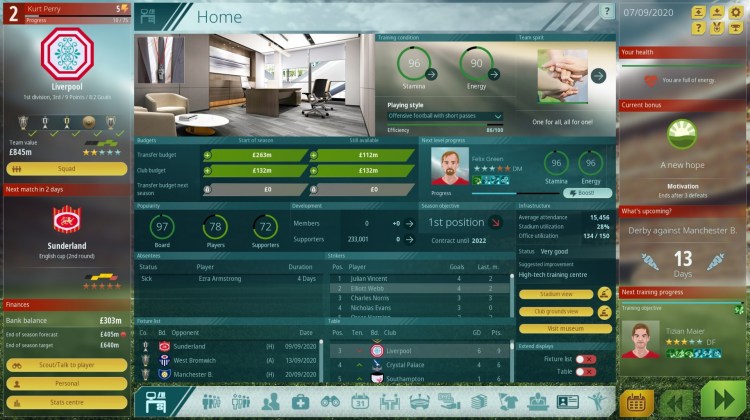 There are still some complexities that a genre connoisseur can get invested in. The training is fully adjustable, clubs have certain philosophies that you are expected to fulfill, and you can play around with the behind-the-scenes stuff like staff management and finances. You’re actually given more control over your club than in Football Manager. We Are Football is just as much about managing a franchise and business as it is playing football.

An example of this is the builder where you can fully customize the club grounds. Being able to invest funds into new training facilities and then see them in a 3D environment is awesome. It’s a feature that I haven’t seen in any competitors which provides an extra level of immersion. It’s especially neat when you’re building up a smaller club and get to see your facilities gradually improve over time.

During a highlight, you can not see any of the players on the pitch bar except for the player who is on the ball. Even then, you don’t see the actual player, but rather their name along with a generic description of what they are doing. 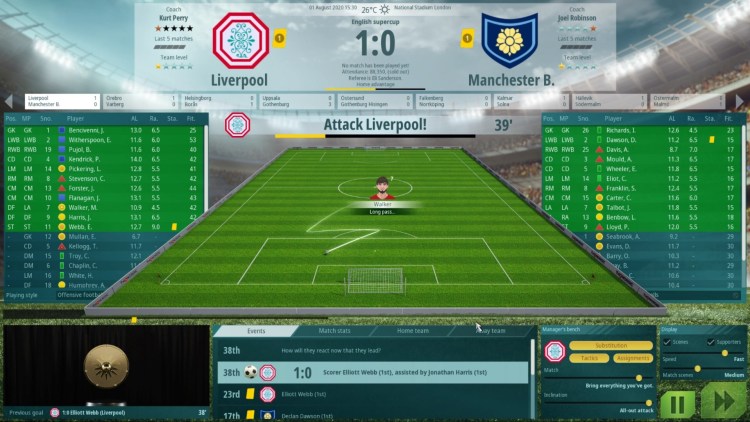 We’re talking “Walker, long pass,” with a picture of the player and an arrow showing where the pass went. This is by far the biggest problem with We Are Football. This almost primordial approach to match engine development would have felt out of date when Championship Manager 03/04 was released. Over seventeen years later, it’s clearly not good enough.

It isn’t just in the visual department where the match engine fails either. The logic is questionable at best with action in matches happening that just don’t make much sense. It’s bizarrely common for players to head the ball a few feet from the goal, but instead of shooting, they send the ball flying backward for an edge-of-the-box long shot. 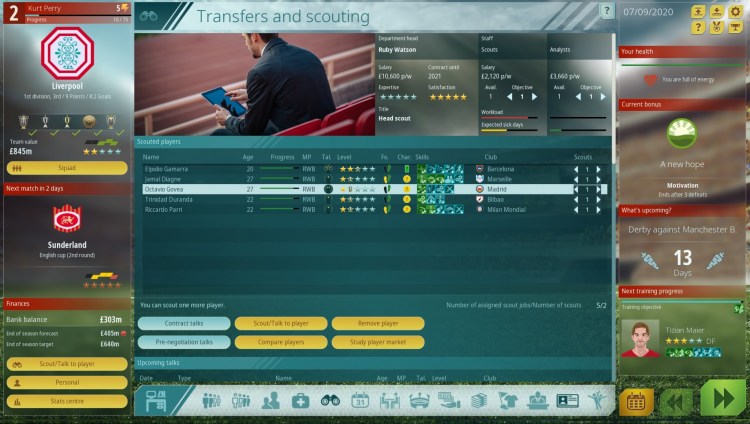 The scouting interface is a particular highlight of We Are Football’s UI. It pummels the cumbersome Scouting Center present in Football Manager.

Also, the lack of player attributes causes the match engine to not know exactly who should do what. Tall center backs often take corners while full-backs will score half of the goals in a season. There’s no continuity or flow in a game. Instead, highlights seem to just spawn out of thin air. This is unnatural and honestly doesn’t even play out like a semi-accurate depiction of football.

A positive is that the interface during matches is very easy on the eyes. Each menu is purposeful and convenient to jump in and out of at an instant. Given how often you need to stop match play to make tweaks and changes, this is fantastic. Truthfully, the UI of We Are Football as a whole is excellent. Its aesthetic and interface design are the two areas in which it genuinely outperforms Football Manager.

No license, no problem

As with most sports games, We Are Football has next to no licenses. This is because both league and player licenses are expensive and EA has all sorts of exclusive deals already locked up. Even Football Manager, a series that sells millions every year, struggles in this department.

Thankfully, this actually isn’t too big of a problem. Alongside the release, Winning Streak Games bundled a dedicated database editor with We Are Football. The editor can be used to change the information of just about everything that is loaded into a save. 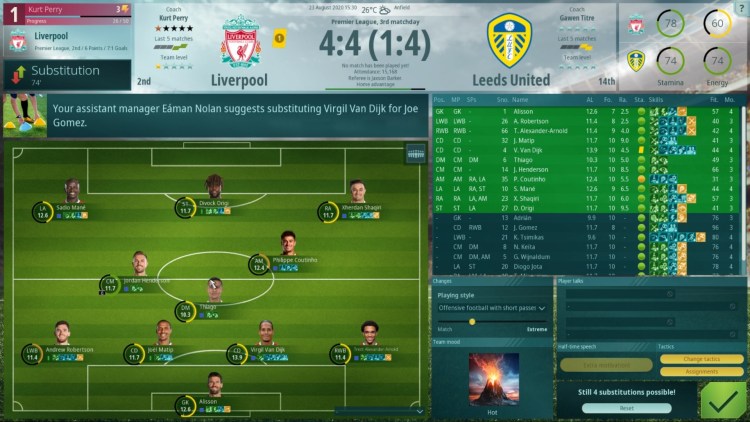 Having real names and badges is nice but it isn’t perfect. For example, in this database, Shaqiri is one of Liverpool’s best players despite hardly featuring in the team in reality.

The community has already taken advantage of this and released a pre-alpha license fix. It isn’t perfect, but it does fix the names of clubs and players as well as add real badges and stadium names. Credit has to be given to the developers for thinking ahead and including this feature alongside the game’s debut.

Unfortunately, the license patch does not fix the flawed logic behind the game engine. If anything, now that you actually know what each player should be able to do it might make it more noticeable. Let’s just say in my time playing I saw a few too many Andrew Roberston thirty-yard goals for my liking.

There’s work to be done

To We Are Football‘s credit, it is better than most games that enter the football management circle. Generally, they release, fail to gain any traction, and then die out without accomplishing anything. This is already ahead of the curve just because it has gathered a decently sized player base from the get-go.

The problem is that We Are Football is playing a game of catch-up. Both Football Manager and FIFA have been around for a long time. In that time, the competing franchises have refined and tweaked just about every feature imaginable. As a newcomer, We Are Football lacks that opportunity and offers a raw experience that doesn’t provide enough complexity for my liking. If the counter-argument to that is that it’s targeting a more casual audience, then the lackluster match engine becomes even less excusable. This is a decent first attempt but it’s going to take years of work to even begin to close the gap on the frankly superior Football Manager.

We Are Football lays the foundations for future titles to prosper. But as a game, it isn't all that great. The primitive match engine in particular is just not good enough in this day and age. Regardless, there are some good ideas present and it looks far more promising than most of the Football Manager clones that have come and gone. Even if you don't want to wait, it's not like We Are Football is necessarily bad. Some may find the streamlined, faster experience a refreshing change from Football Manager's more complex offerings.