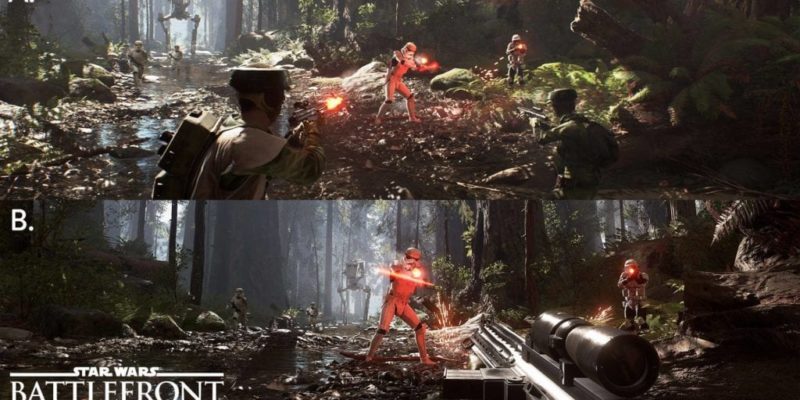 Star Wars: Battlefront will be joining the fairly hefty list of games which offer split screen co-op in the console version of the game, but not in the PC release. Confirmation of that news comes from an early July Q&A session about the game.

This probably isn’t a huge surprise, as the PC gets ignored over split screen options with predictable regularity. A little more surprising, though, is the eagerness with which some PC players are happy to just let this option go. When the Star Wars: Battlefront news was reported the other day, you could find any number of reader comments along the lines of “who cares, nobody on PC uses split screen anyway.”

In all honesty, if I wind up with Star Wars: Battlefront on PC, split screen isn’t something I’d be using either. But while that particular local co-op option is somewhat niche on PC (I think; getting specific numbers on this sort of thing is borderline impossible,) it’s only going to remain that way if games keep dropping the opportunity for people to use it.

And you know what, the PC is supposed to be the platform of niches. We’re the place you go for options, and choice, and absurd levels of graphics tweaking. Whenever an option gets taken away, we should be asking why that’s the case. Is there a good reason for Battlefront not to at least have an option for PC split screen?

I realise, of course, that there’d be more work involved than simply copy-pasting the existing console code over to the PC release, but I can’t envisage too many situations where adding the split screen option eats up vast amounts of DICE’s time or resources.

It’s understandable why they might feel it’s not necessary. Even Valve, bastions of largely doing PC games properly, ditched split screen from Portal 2 and Left 4 Dead 2 (though, weirdly, left the code alive and well inside the dev console, so people could still activate it if they wanted.) When Resident Evil Revelations 2 dropped split screen from the PC version at the last minute, community backlash eventually encouraged them to put it back in as an option.

That should be enough to prove that some PC users still desire split screen as an option for co-op play. And with more people integrating PCs into their home theater systems, or just hooking up a box to their TV, there’s no longer any reason to dismiss this as a console-only function. The days of having to squeeze split screen co-op play onto a smaller PC monitor are long gone. Larger displays, not to mention the upcoming wave of Steam Machines, mean that, if anything, split screen on PC could be primed to become more popular than ever before.

But that’ll only happen if players fight for it. When people argue against it on the grounds of “well, I won’t use it,” that doesn’t seem terribly productive. Personally, I can’t stand Chromatic Aberration effects. I’m not too keen on most implementations of Motion Blur either. But other people seem to like them, so I’ll always advocate for those things to be toggleable options. The same courtesy should be extended to those who’d like to see split screen.

Similar reasoning can be applied to things like 4K resolution support. Again, probably just as niche as split screen (in terms of how many people have set-ups that realistically make use of it,) but important to a pioneering minority and useful to have as an option for when people re-visit games in a future where 4K is more widely affordable and adopted.

It may be too late for Star Wars: Battlefront to pull a reversal and include a PC split screen mode, but by just shrugging off the decision to drop it (or worse, by celebrating it,) we’re all settling for losing an option on PC that’s going to be standard in every other version. As somebody who always likes to see the PC release be the definitive, option-rich version of any title, that just seems weird and wrong.

Quite a healthy number of games already support split screen functionality on PC. It’s a shame Star Wars: Battlefront doesn’t have the foresight to be among them.

Game of Thrones Episode 5 screens unveil a Nest of Vipers