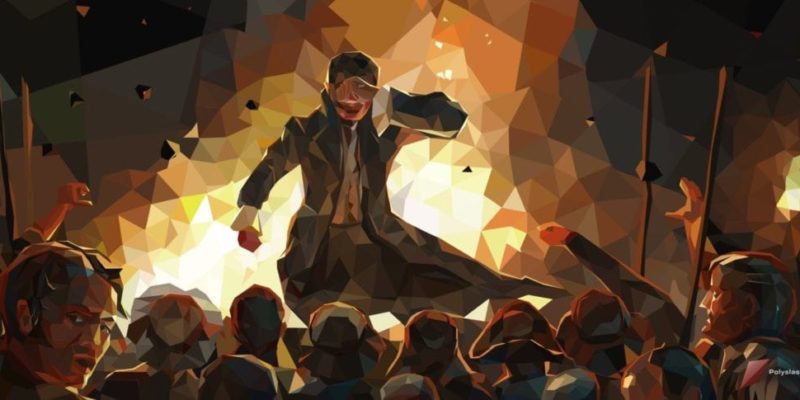 Created by Polish developer Polyslash, We. The Revolution puts players into the role of a tribunal judge at the height of the French Revolution. Although you’ll see plenty of misdemeanor cases alongside charges of treason that go all the way up to the king and queen, the game doesn’t necessarily test the player’s sense of justice or morality. In fact, they’re rarely considerations as you read through court documents and render verdicts. As indicated in our preview, the game deals more with political intrigue as your character climbs the social ladder to become a person of influence and prominence during this period of upheaval.

So if you’re looking for a thought-provoking game that captures the turmoil of the time, then you might be in for some disappointment. Although you’ll often have to choose between life or death, you often use court cases more as a means to appease different factions while elevating your own social standing and influence in Paris. 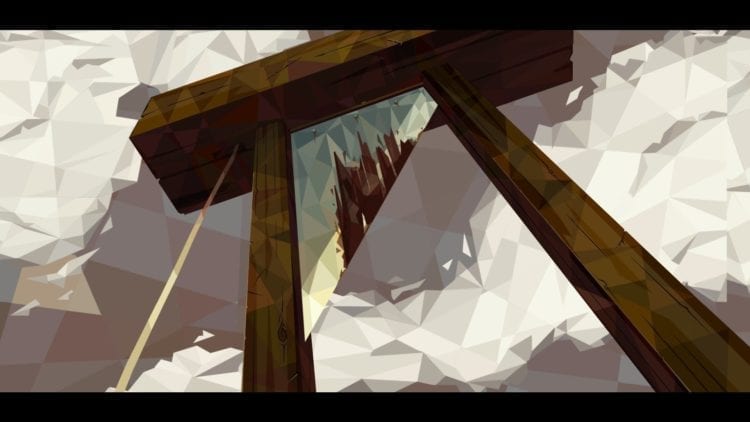 Get used to seeing the guillotine drop.

Court Is In Session

A typical case involves a written summary, some spanning multiple pages. After reading through the details, players need to make certain connections to unlock questions. For example, a bloodied knife may link to a “murder weapon” category. But making too many mistakes will lock the system, preventing you from unlocking any more questions. The text also throws in fake clues as traps.

It’s here that you get the sense that you’re playing a game against the developers instead of trying to unravel a mini-mystery or threading the ambiguities of justice. You’re not trying to organize the clues in a logical way. You’re trying to figure out how the developers fit things together. For instance, the case summary might explicitly state that a letter is submitted as “evidence,” but the related question might be linked to an entirely different category like “counter-revolutionary.” Most of the connections make sense, but some seem utterly arbitrary. 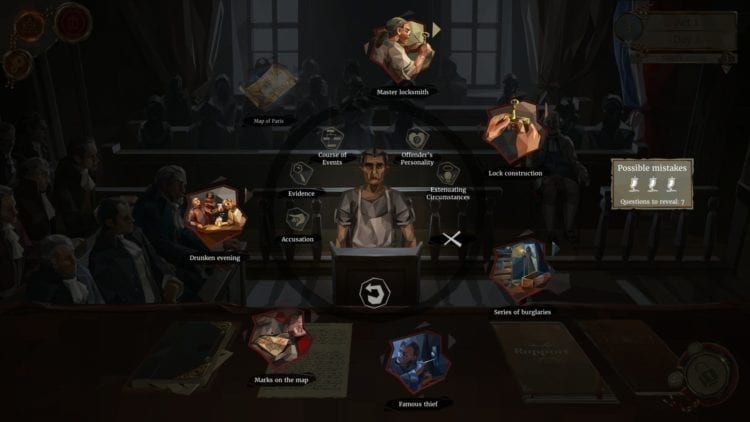 Make connections and ask the right questions to influence the jury.

Once you’ve figured out the clue connections, you can ask the defendant questions. This is where things are very different from what you might expect from a courtroom drama. Instead of having lawyers present evidence and make arguments, you’re solely in charge of a verdict. The prosecutor is there to simply berate the defendant and will do the same to you if you acquit. Meanwhile, the jury is almost incidental.

The hearing process involves asking the defendant a series of loaded questions that will intentionally lead the jury to recommend a specific sentence. So, if you want to send a political opponent to the guillotine, you’ll only ask questions that will make them sound guilty. By actively manipulating the jury, you can render practically any verdict you want while still looking respectable and just.

Your goals are primarily to appease the different factions, which include the common people, the revolutionary radicals, and the aristocrats. Each will have preferred verdicts, no matter how insignificant the case might seem. Verdicts that make them happy earn approval, while being at odds with them will lose points. If you completely lose the approval from one faction, you’ll quickly find yourself assassinated. Rendering preferred verdicts to keep yourself from dying forms the entire foundation of We. The Revolution.

Settling Out Of Court

To break up the monotony of reading one case after another, there are a couple of related mini-games. These include choosing between different activities to appease your family members, which will also influence your reputation and ranking with factions. You’ll also need to put your powers of persuasion to work by talking certain people into allying with you. Then there’s a strategic board game where you move agents around to gain control of Paris and accumulate influence points. 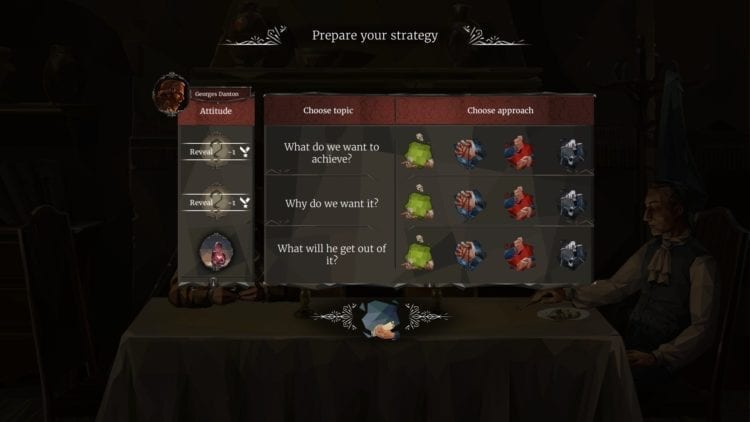 Convincing others to join you becomes as mechanical as checking off boxes.

This is where We. The Revolution ends up going in too many directions. A major factor of appeasing your family involves balancing. Taking a nice stroll around the city might make your wife and children happy, but your father apparently hates exercise. Meanwhile, listening to your dad talk about stories from the old days makes everyone else unhappy. A real person might multitask and let dad tell a story while walking along the streets of Paris, but this is how things go. Each family member ties into a faction or your reputation, so you must try to keep everyone happy to succeed.

Meanwhile, the conversation game mainly comes down to guesswork. Each conversation has a number of topics that the person you’re trying to persuade will feel something toward. But you don’t always know how they’ll feel. There’s no small talk to try to get a sense of their position about something one way or another as you would in a role-playing game. Uncovering their feelings means spending influence points, then planning your responses accordingly. This loses all sense of strategy once you figure out the response formula, like how you should always act aggressively when they’re withdrawn. Then it’s just a matter of having enough influence points to uncover their feelings and checking off the corresponding responses. 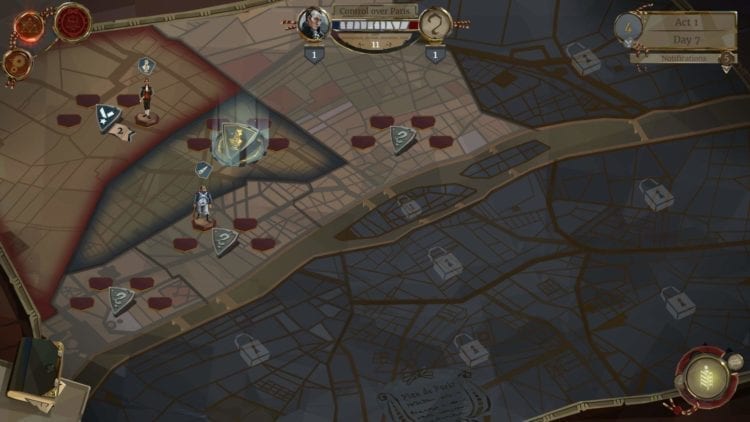 Trying to win control of Paris is fun at first, but then the computer cheats.

Lastly, the strategic board game to control Paris is fun at first but becomes far less so once you realize how deeply the odds are stacked against you. Not only are you pitting your agents against a political opponent, but revolutionary patrols will come into the picture. These patrols are a neutral party that will eliminate or detain agents from both sides, but they seem to have a strong preference for your units.  Your opponent may also have more agents than you and can replace them immediately. Meanwhile, your agents need time to recover from being injured or detained, giving your opponent an overwhelming advantage.

Off With Their Heads

We. The Revolution loses almost all its charm by Act 2. At this point, for the sake of “expediency,” the game removes prison as a sentencing option. Additionally, players are handed a series of quick cases that forego the entire trial process. Players simply pick these one paragraph cards up and drop them into a death or freedom list, which will either appease or anger a faction. 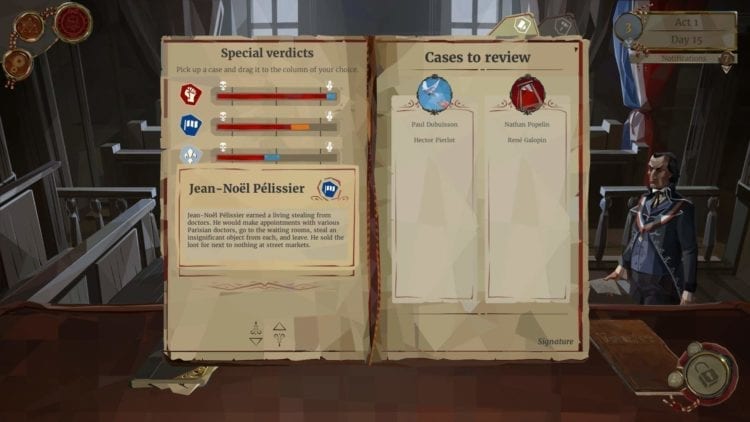 Petty theft could mean death, but at least an actual crime is committed.

The idea of strategy, justice, and morality go out the window from here. Without prison as a middle option, you have to either sentence misdemeanors to death or let them go altogether. There’s usually no evidence to support the idea that a crime was committed. Sometimes, I wasn’t even sure what the crime was exactly, as some deal strictly with birth privileges and class, but the factions still feel strongly about the verdicts.

These quick cases exist solely to gain points with factions, but you don’t know what they want until you drop them into a verdict list, and you can’t take any back. I thought that a faction (which is usually quite bloodthirsty) might want to see an alleged rapist sentenced to death, but apparently not. So, these cases end up becoming little more than guessing games that can be solved with a coin toss. They also repeat, which takes out all the weight from sentencing people to death for little or no reason.

Ultimately, these cases simply become a nuisance that players need to slog through. It’s much like how filling out the court report – which is an open book quiz that asks specific questions about the case details – is there to make sure you actually read the summary. The developers must have realized that most people would probably just skim the details, make the connections, and jump straight to a predetermined verdict. 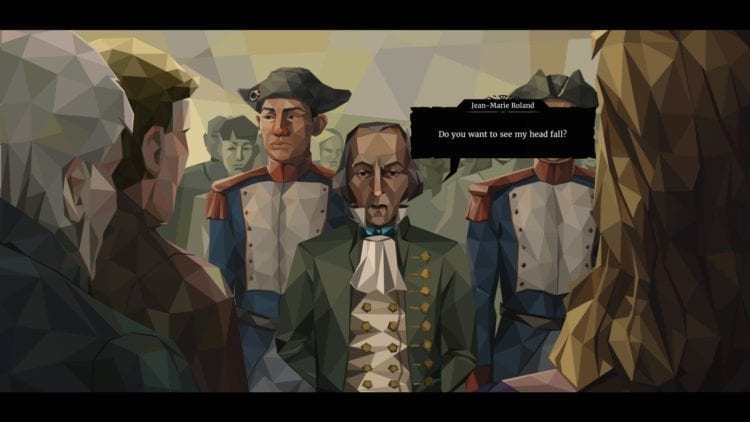 Then there are the occasional points when Revolution shifts from being a political courtroom drama to a terrible tactical strategy game. Except, instead of trying to anticipate your opponent’s move and responding with hard counters, you’re tasked with throwing your army against his in the hopes that you’ll have the last unit standing. Opponents may have bonus advantages to make up for how they usually use the same move over and over again.

These tactical mini-games take up much of Act 3, and it’s easy to get stuck on them. At one point, I had to replay the same battle a dozen times before I figured out the winning formula to progress. 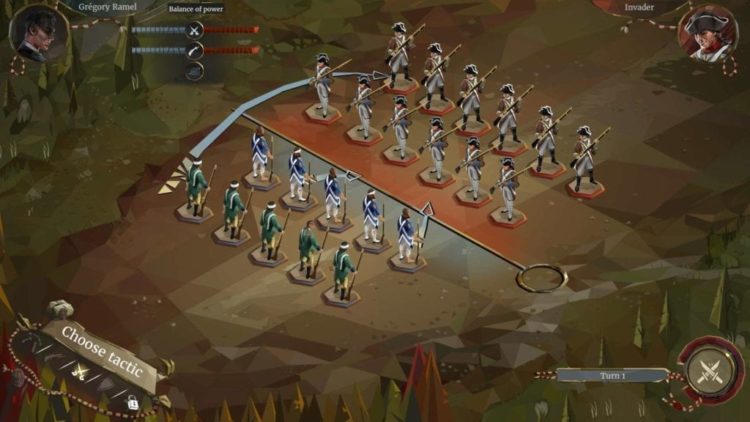 Suddenly going from being a judge to a militia leader.

Perhaps a game that fully captures the moral ambiguity of justice is simply too ambitious. But it doesn’t seem like We. The Revolution even tries to walk the fine line between what is right and what the people demand. You have no incentive to vote against what the factions want unless you simply want to make the game harder for yourself. That is a tragically lost opportunity.

The game could have been more interesting if it truly involved changing history, like if freeing Marie Antoinette had any kind of meaningful impact other than to make everyone angry at you. At the very least, there could be a grace period between losing favor with a faction and getting stabbed. Perhaps factions could have made things more difficult for your family, so they’d pressure you to turn things around. 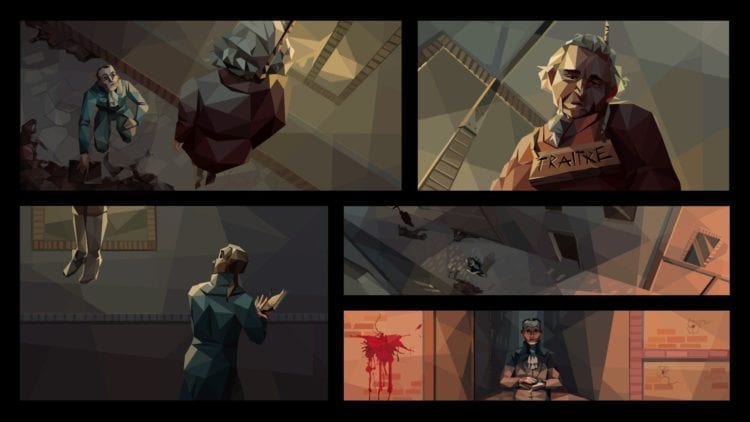 Beneath the shallow gameplay is an excellent story, told with remarkable artwork.

Also, critical parts of the game are either broken or don’t make sense. For example, a normal family might come together to support a member who suffered a tragedy – not grow upset because they can’t tell past stories or engage in political debates. Additionally, interactions for characters that have been removed due to the plot still show up, which comes off as an annoying oversight.

It’s too bad because the main story is excellent, full of intrigue and suspenseful twists, complemented with decision-based scenarios. The game also features some amazing hand-drawn artwork. These parts are almost good enough for me to forgive some of the game’s faults. If only the gameplay didn’t turn out be such a chore. Revolution doesn’t even seem to have the patience for itself, since it only allows you to ask a limited number of questions before the gallery grows annoyed at you. Pretty much everything urges you to mechanically make a handful of choices and move on, not uncover any hidden truths.

We. The Revolution could have been a deep legal drama and challenging political strategy game, but it doesn’t end up being much of either. What we have instead is a game that tries to overcome its shallow gameplay by adding more shallow experiences on top of it.

Although We. The Revolution has the potential to be a deep and challenging political strategy game, its gameplay becomes too shallow to be much of anything.

Johnny Cage Is Tired Of His Own Sass In Mortal Kombat 11 Old Vs. New Trailer