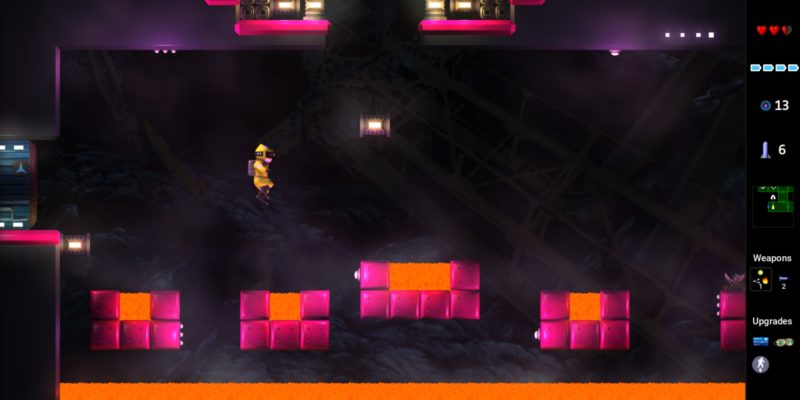 I wasn’t sure anyone could actually make a truly random rogue-lite that functioned just like Metroid, let alone one that accurately captures so much of what people love about that game. After all, levels that require you to find specific upgrades to progress need to be hand-crafted to flow — or so I thought. Weapon Hacker, a game designed practically single-handedly, has managed to make it work.

Weapon Hacker is described as a combination of Metroid and The Binding of Isaac. The game drops you into the shoes of a fellow wearing a yellow protective suit as you fight to survive through dangerous zones. Naturally, you need to collect upgrades along the way that allow passage. Different doors or blocks require specific weapon types to open, such as fire and electricity. Making your way through hallways flooded with lava takes an upgrade that shields you from the damage. Reaching higher pathways, you guessed it, takes a double jump.

But since it’s a rogue-lite, Weapon Hacker changes things up every time you die. The level chunks are designed so that, if they show up, the upgrade will be somewhere close by. If you run into lava, searching will net you the lava shield. And the game manages to make everything feel organic and natural every time you start a new run. Things never feel awkwardly stitched together. It just always feels like Metroid on a randomizer, which is just awesome. 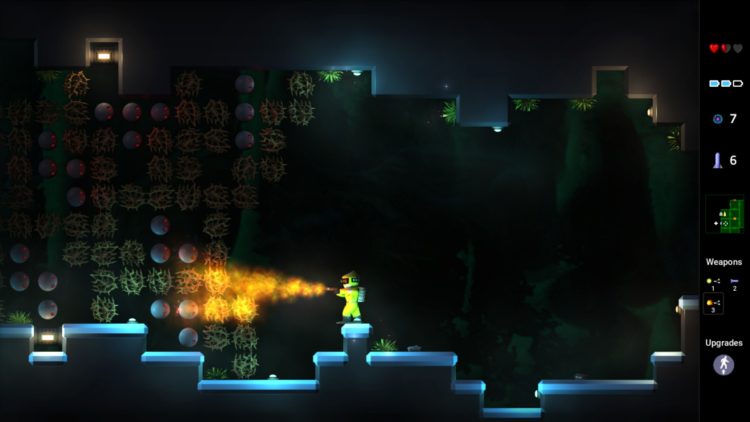 The visuals and room layouts also vary a lot, making runs feel even more like their own game instead of a slight spin on the same old rooms. After a few hours, I rarely saw the same level chunks repeated verbatim, save for the small areas that the mandatory upgrades are housed in. Weapon Hacker also naturally has a ton of upgrades everywhere, either found almost in place sight or from shooting the walls.

The combat is similarly what you’d expect, although it has some substantial wrinkles. Your character starts with a small amount of battery power that allows them to add upgrades to their gun. You choose a default gun type, such as the basic peashooter, flamethrower, electric gun, or laser, and then add additional effects. These alter the shot’s range, damage, spread, and rate of fire, among others. There is a surprising amount of customization options.

On top of that, Weapon Hacker has missiles. Yes, they’re weapons, but they also work as a kind of currency for optional things. Missile doors are never mandatory and typically have stores or upgrades behind them. Plus, enemies drop currency that can be used in these stores.

There are bosses, too. You need to get special boss keys to move to other areas. Defeating them even allows you to fire multiple times of guns at once, like the aforementioned flamethrower and laser. There’s no morph ball, though. Instead, you disguise yourself as a grub and crawl through tight corridors. Spiffy! 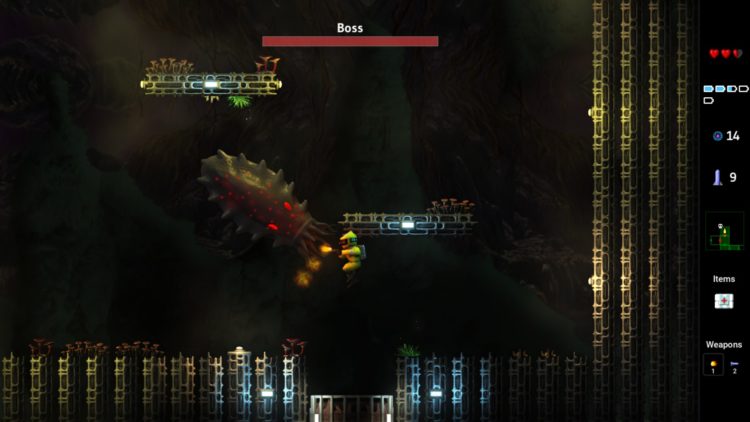 Since Weapon Hacker is a rogue-lite, though, you were probably wondering if it’s hard. Of course, it’s hard! You start by only being able to take about four hits of damage before needing to find more health. But since the game is randomized, you might not be able to find any in time. But you can find some medkits and health upgrades that make things more doable. I will say, I do wish the game wasn’t quite so difficult. A lot of the time, I feel like I’d die too quickly in a run without having much of a chance. It also doesn’t help that some of the enemy placement makes it seem borderline impossible to get out of a room without taking damage.

Weapon Hacker has a lot going for it. Its title may be dull and kind of generic and the visuals aren’t much to look at. But I’d say it looks fairly decent considering that the art was all done by the same guy who designed the rest of the game. If you like Metroid and you’ve wanted a rogue-lite version of it, here’s your chance to see that come to fruition. Just be careful: some of the enemies are extra obnoxious. 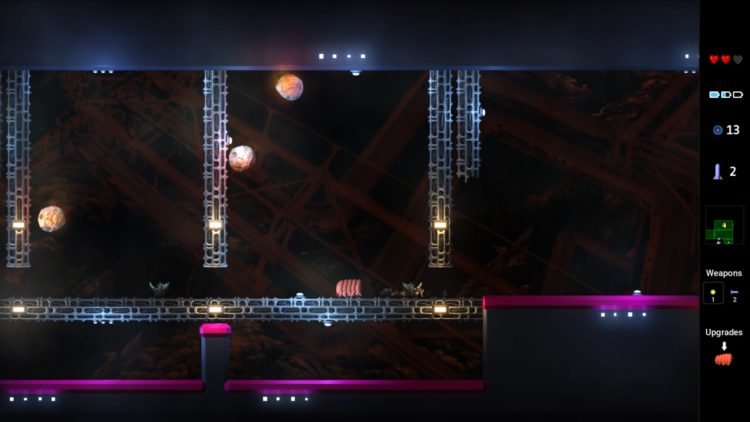 Rainbow Six Siege might be crossing with Splinter Cell