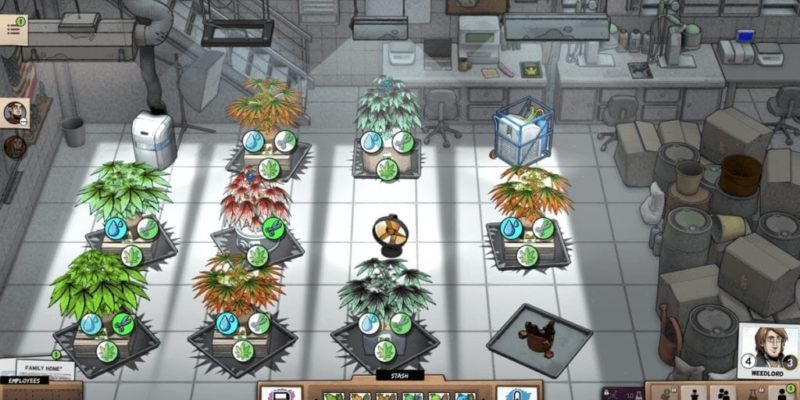 There’s one particular fan favorite panel every year at E3. It’s not Microsoft’s or Activision’s, or even any of the bigger industry conglomerates. It’s the Devolver Digital panel, owing to their quirky and unconventional presentation. The company has been known for publishing a slew of games that break the mold. They’ve got the Serious Sam franchise, Hotline Miami, Metal Wolf Chaos, and many more. It looks as though they’re now adding something that’s bound to be timely with Weedcraft Inc. It’s a marijuana management/sim game. Check out the announcement trailer below:

Years ago, marijuana was just something young adults snuck a puff of while trying to hide it from their parents. Back then, people thought The Netherlands was fairly advanced and cool for having it as the norm. Today, several American states have fully legalized its commercial sale and use. Many others either allow provisions for its use in medical treatments or have decriminalized it. Other nations have followed suit or are open to the idea.

Weedcraft Inc is as timely as it gets, given that it’s the first tycoon game solely centered on growing your burgeoning legalized marijuana business. There are myriad ways that you can decide on your course of action. Naturally, you’ll have to hire staffers to help with the business. Obviously, you’ll end up facing stiff competition as well from other dealers and stores. However, it’s also worth noting that other factors will come into play. The police can be on your tail, or politicians might need a little rubbing just to get on their good side.

One funny aside mentioned by the creators is that you’re not just going to be growing real-world forms of the leafy green. Instead, you could also experiment on brand new strains, even those from killer plants. The end goal isn’t just to get high. No, of course, it’s to make millions. Your own pot of gold… from pot, no less.

In some ways, Weedcraft Inc will be like saying goodbye to the old days when ESRB warnings for “drug use” in games were meant to scare off buyers. We can suspect that quite a number of Californians might be lining up to grab this one once it launches in 2019. Sigh, Devolver Digital (and Vile Monarch) — those folks sure do know how to surprise everyone.

Kursk Gets New Release Date To Coincide With Movie