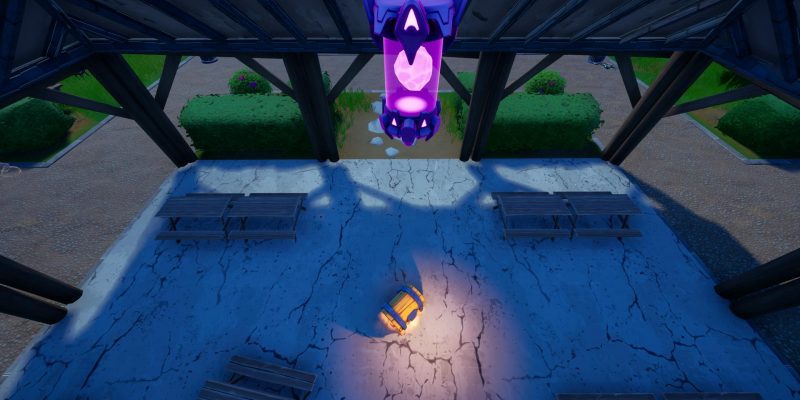 Fortnite players have been collecting Alien Artifacts for weeks now to enhance their Kymera alien skins. These items act like an in-game currency specifically for this skin, and can be collected in several ways. You can discover the new pink glowing cannisters that spawn around the map each week for about 20 on average, as well as unlock Cosmic Chests for an additional weekly bonus. Week 5 is no different, and you can earn 20 more Alien Artifacts for your Kymera skin in just a few quick matches of Fortnite.

If you still need to track down the Alien Artifacts from previous weeks, refer to our Season 7 guide hub for those locations.

It’s easily possible to get all of the Alien Artifacts this week in just two games. During our run-through, we almost managed it in a single game. The easiest way to go about hitting all of these locations is start at Believer Beach. Land on the roof of the blue duplex with the rocket graffiti on it and break through to the attic to find the first Alien Artifact.

Once done, drop down to the street and grab one of the vehicles to head to Pleasant Park. The second Alien Artifact is located near the ceiling of the pavilion in the center of the park. Just build a ramp to get up to it or break through the ceiling in the middle.

Again, grab a new vehicle with enough gas to get you to the third Alien Artifact on the north end of the map. You need to get to the campsite overlooking the ocean on a small cliff east of Craggy Cliffs. Take the road out of Pleasant, but keep going straight after you cross the bridge and then take a left at the road that runs along the cliff above the east side of Craggy Cliffs. You can drive off the road once you get about halfway around the bend and then drive down to find a small campsite. The Alien Artifact rests below a tree there. Just refer to the map below for the location. 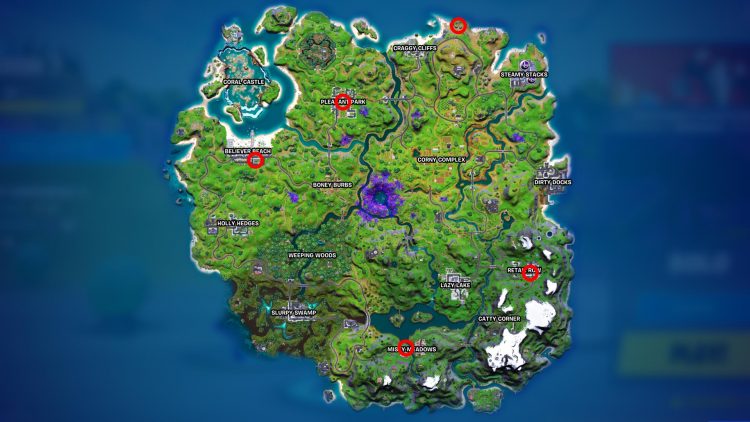 The next two Alien Artifacts are easy to pick up in a separate match. Just land at Retail Row or Misty Meadows and then drive to the other location. Both have plenty of cars you can use, so order doesn’t matter. The Alien Artifact at Misty Meadows is inside the clocktower (which is next to the bridge) on one of the upper floors. The Alien Artifact at Retail Row is near the east side of the location in a small park next to the basketball court. You’ll see this pink glowing cannister right out in the open and have it in no time.

That’s it for Week 5, but we have all kinds of other guides for Fortnite Season 7 Invasion and will follow up with where to find more Alien Artifacts at new locations in the future. You’ll need a bunch of Alien Artifact points to unlock all of the Kymera styles, so check back each week to save yourself some time.