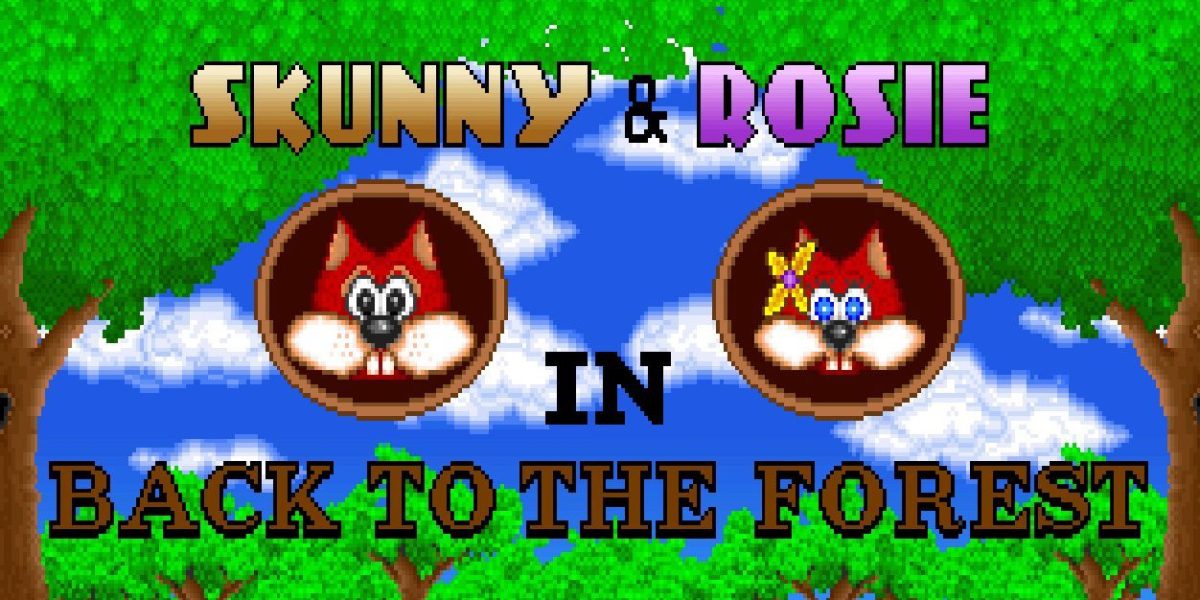 Weird Wednesday is a chance for us to dive into the stranger PC games and stories from the last few decades. For this week, we look at Skunny the squirrel, a mascot character created by game developer Copysoft.

Over the course of three years, Copysoft pumped out six Skunny games, each with its own brand of terribleness. Sexism, awkward innuendos, terrible controls, the games had every sin you could find in ’90s children’s video games. But today, I want to focus on the game that is arguably the least playable platformer ever released for PC.

That’s right. We’re looking at Skunny: Back to the Forest.

The screen that greets you when you run a Skunny game.

Everything about Skunny makes me uncomfortable. The first name alone feels slimy, but what did Copysoft provide for his last name?

His name is Skunny Hardnut. And he loves — and I’m not making this up — children, animals, and “sticky nut puddings.” 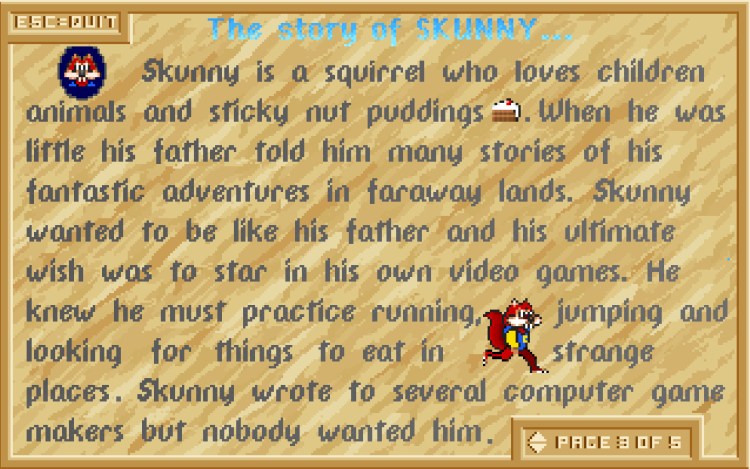 Even the devs knew nobody wanted him.

Video game mascot characters were huge in the 1990s for good reason: games were often marketed for children, after all. Epic Games had Jazz Jackrabbit. Titus France had Titus the Fox. Accolade had Bubsy.

Honestly, I think Copysoft made a good choice with a squirrel. According to my five seconds of searching “squirrels in video games” on the internet and clicking on the first link, Copysoft made the first true squirrel mascot video game character. The company beat Sunsoft’s Zero the Kamikaze Squirrel by just a year. And despite the terrifying logo screen for Skunny games, his species is very easy to identify, and he’s arguably cute.

To be fair, Copysoft was located in Belgium. While the word “nut” became an innuendo in the English language by the 1920s, it’s highly unlikely the developers knew; slang before social media tended to stay regional, after all. It’s more likely the team drew the name from the idiom “a hard nut to crack.” After all, the Skunny games are surprisingly hard.

Besides, the English was still better than many localization attempts from other companies. I can live with Hardnut.

What I can’t live with, though, is the gameplay in Copysoft’s first attempt at a platformer: Skunny: Back to the Forest.

Skunny can’t be that bad, right?

Look. I’ve done the platforming in the first Dark Souls, the game where run, jump, roll, and backstep were all mapped to the same button. I’ve completed Pitioss Ruins, the platforming dungeon in Final Fantasy XV, a game that had no business in platforming sections at all. I’ve even beaten several of the levels of Lost in Plantinus, an ancient MSX game with a framerate so low that it’s practically a turn-based platformer.

Each is more playable than Skunny: Back to the Forest.

Even the basic platforming in this game is a struggle.

A platformer can only be as good as its controls, and Skunny is almost unplayable. When he’s slow, he’s too slow to make most of the jumps. When he’s fast, it’s nigh impossible to slow him down. I’ve worked on platforming physics myself, and a handful of changes would make Skunny much easier to control:

But really, these are lessons learned through the course of making a video game. Even with hundreds of tutorials and help all around the internet, new developers still struggle to complete projects. Video games are hard to make. 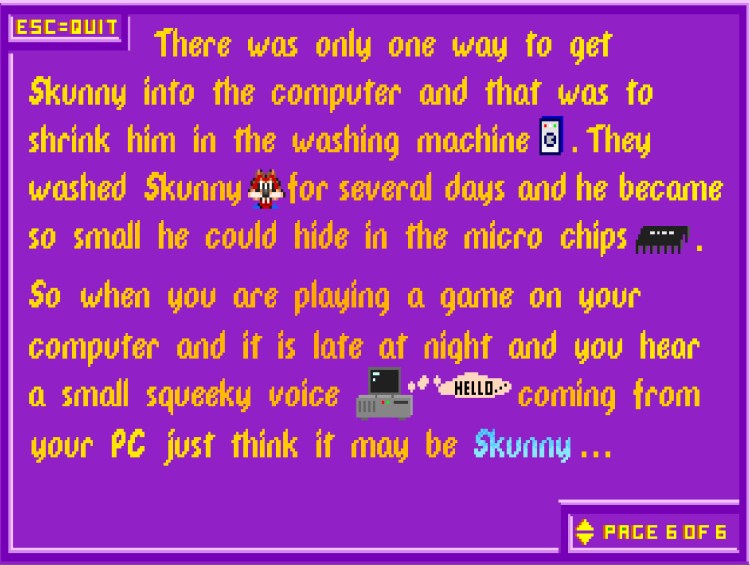 Here, have a few more nightmares.

In some ways, I’m impressed

Both Nintendo and Sega held fierce competition when it came to visual processing power. Nintendo released its timeless classic Super Mario World in 1990, and in the following year, Sega retaliated with Sonic the Hedgehog. Although the PC saw Commander Keen and Duke Nukem in the early ’90s, these platformers could not keep up with the rapid visuals and action-filled gameplay of those console rivals. The first PC platformer to really get the formula right was Jazz Jackrabbit, released a year after Skunny.

Considering Copysoft squeezed six games out of its uncredited developers in 1993 alone, I have to give the company props. With more time, these developers could have made a true classic.

It’s all uphill from here for Copysoft, right?

The Early Access version of Dune: Spice Wars will drop later this month