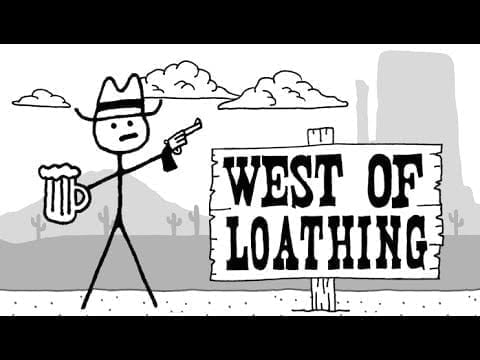 Developer Asymmetric announced that its wild (wild) west comedy RPG, West of Loathing, will launch on PC, Mac and Linux on August 10th.

West of Loathing is a single player slapsticks comedy RPG set in the wild west of the Kingdom of Loathing universe. game will contain a branching narrative, hundreds of enemies and almost100 unique locations to explore.  The title’s gameplay will be some kind of a hybrid of point-and-click adventure and a turn-based, tactical combat system.

There is a brief description of the game available, provided by the developer, below:

Leave your family farm and head West to find your fortune! Traverse snake-infested gulches, punch skeletons wearing cowboy hats, grapple with demon cows, and investigate a wide variety of disgusting spittoons. Charm your way out of trouble as a silver-tongued Snake Oiler, plumb the refried mysteries of the cosmos as a wise and subtle Beanslinger, or let your fists do the talking as a fierce Cow Puncher. Explore a vast open world and encounter a “colorful” cast of characters, some of whom are good, many of whom are bad, and a few of whom are ugly.

Below, you can take a look at the game’s latest teaser preview trailer: