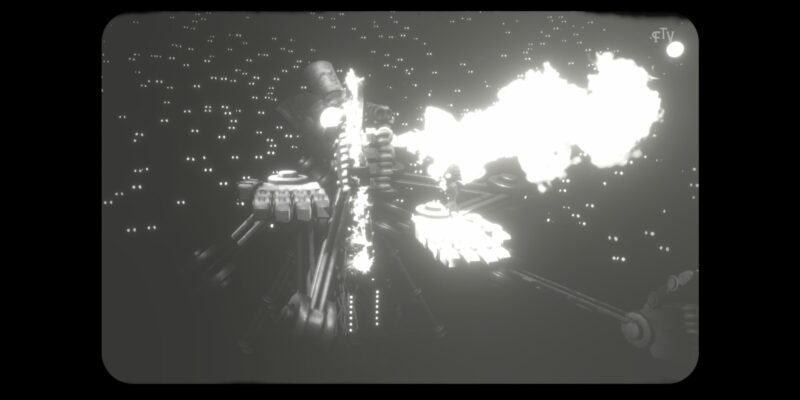 Ah, another two-hour cinematic platformer. White Shadows doesn’t do anything differently than most of its ilk. At least, not structurally. It’s a familiar monochrome experience about walking to the left or the right while occasionally pushing boxes, pulling levers, and dodging spotlights. However, it does attempt to handle some weightier topics than most. On top of that, it has the most elaborate, budget-looking details in the background that I think I’ve ever seen in a game like this. It’s a worthwhile experience if you like cinematic platformers, just don’t expect anything too out of the ordinary.

White Shadows tells the story of a raven girl. There was an apocalyptic event prior to the start of the game that destroyed the animal society of yesteryear, and things were slowly rebuilt. But the wolves scapegoated the birds, who were then placed at the bottom of the social hierarchy. Now, all animals are equal, except for birds (but not really, even). The society appears to be underground and everything is dimly lit due to a lack of available light. But the light itself is all made from batteries powered with dead baby birds, funneled through machinery in huge numbers. It’s pretty grim, although humans obviously treat animals in a semantically identical fashion, so it’s not that grim.

The story is very clearly an allegory for human racism using animals, built off of references to the works of George Orwell. It’s pure Animal Farm and Nineteen Eighty-Four, down to the group responsible for light being the Ministry of Light. Wolf-made propaganda meant to demonize ravens can be seen throughout the game, but it doesn’t actually try to say much with any of its commentary, which s a bit of a missed opportunity. Still, the presentation of this subject matter isn’t overbearing and the massive, bleak structures prominently featured in the game’s stark backgrounds cast an oppressive pall over the tone that mixes well with its story of class strife. 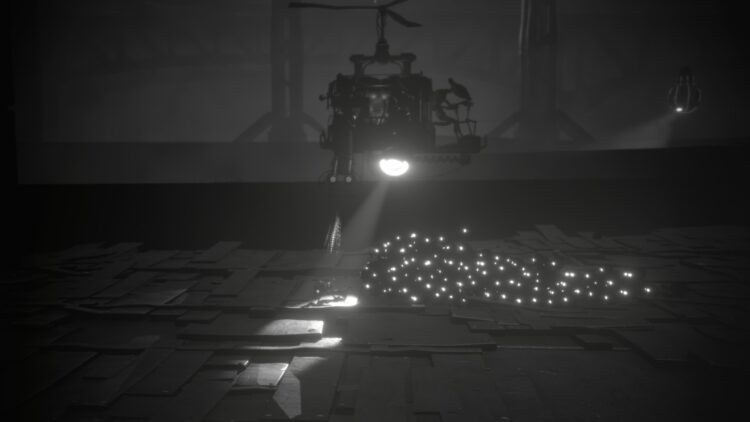 A beacon in the night

If you’ve played a cinematic platformer before, you know exactly what to expect out of White Shadows. You walk left and right to progress. The game is made up of a prologue and five main chapters, all strung together through 20 checkpoints. You’ll jump on platforms, push boxes, pull levers, and solve the occasional puzzle. The controls are perfectly fine, although the game isn’t demanding enough to require much more than that. There is a moderately involved section where you have to dodge obstacles that I rather enjoyed, but it was brief.

Progression is mostly smooth, though, with only a couple of instances of curious signposting holding things up. One section required me to use a box to hold a door open, but the box was on the opposite side of the area and I didn’t see it due to White Shadows being in black and white. This led to me getting to the other end with no clue what to do, until I eventually backtracked to the start of the section to see if there was anything I missed.

There are also a couple of different gameplay sections. The protagonist briefly gets a parasol that she can use to slow her descent, which made for a nice change of pace. At the end of the game, she’s able to spread her wings and start flying, which made for a very nice movement upgrade. Of course, White Shadows is, again, just about two hours long, so there’s not much time for any gameplay to develop or leave too much of an impression. Still, I feel that the pacing was quite good and the game lasted as long as it needed to. 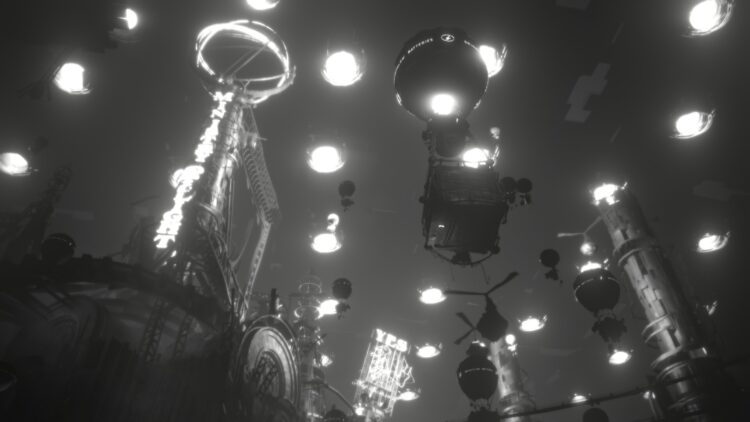 That isn’t to say there aren’t any memorable set pieces, however. I don’t want to spoil it, but my favorite part of a game involved a surreal TV show segment that ends in a cool way. It does a great job of funneling the player towards the conclusion, which I liked. I do have to mention the art direction and level of detail in the world. White Shadows is played on a 2D plane, so there’s no 3D movement. But that didn’t stop the developers from putting a massive amount of love into the background details.

The camera moves dynamically and there are even some playful choices that have a bit of fun with camera orientation. The way White Shadows handles all of this is probably its greatest asset. Its city itself feels massive, with the player character feeling like a truly tiny piece of it. The number of characters onscreen at once is also highly impressive. This is especially true when baby ravens harmlessly mob the player, as there are dozens, if not hundreds, of them rendered onscreen at once. Although, the way you have to use them (and sometimes get them killed) to progress felt at odds with the game’s narrative a fair amount.

There is a massive toll to be paid for the huge number of models and massive distant structures, though. White Shadows runs quite horribly. For me, it was perfectly playable, mind you. But I played it on an RTX 3090 and still saw the fps drop into the 40s. Perhaps this will get improved at launch, but don’t be surprised if you find yourself having ridiculous framerate issues while running this game. The optimization is truly rough, and I didn’t even try bumping it up to 4K. 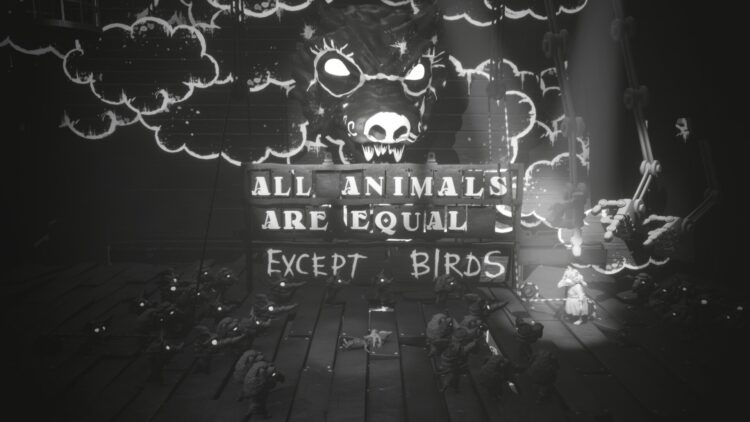 I had a pretty decent time with White Shadows overall. It’s much like watching a movie and it has some really impressive aspects that many of its contemporaries don’t have the stones or budget for. I wish it attempted to say something more about its subject matter, but the very concept of wolves hoarding light made from dead baby birds while subjugating the animals beneath them is interesting enough. The game needs some serious optimization, but if you’re fond of cinematic platformers, there’s plenty here to make giving it a play worth your while. Unless you really hate it when games are in black and white, of course.

Familiar but still containing enough of its own identity to stand out among similar titles, White Shadows is a compelling, albeit brief experience. It could have done more with its gameplay and commentary, but the game is mostly a success.