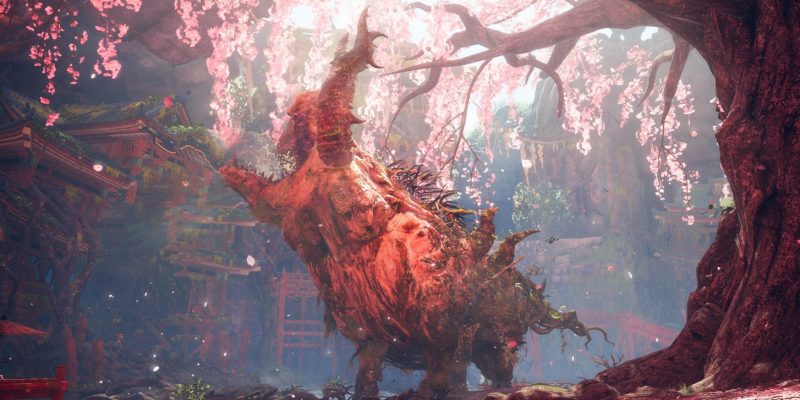 Electronic Arts and Koei Tecmo are taking a shot at the genre in which you carve off monster hide to turn into fire-proof socks. Wild Hearts is looking like a solid rival for Monster Hunter, judging by its lengthy gameplay trailer which launched today. It’s too early to say if it can manage to knock Capcom’s beast-slaying franchise from its lofty perch. However, based on the today’s trailer shows, Wild Hearts may be up for the challenge.

The trailer takes us on a tour of a monster hunt. We start off in luscious green lands with a majestic mountain village in the distance. Trees stretch high into the sky, surrounded by flowing blades of grass. The game briefly shows the character their target: the Kingtusk. Basically, it’s a really big and nasty-looking boar that wouldn’t be out of place in Princess Mononoke.

The trailer shows off some traversal gameplay featured in Wild Hearts. Our monster hunter summons an odd device, which when used allows them hover long distances before reaching the ground. Another tool lets them create a zipline in order to scale a nearby peak. Once atop the mountain, the player climbs up a nearby wall and spots their prey.

Time to hunt some monsters, as you do

Once the Kingtusk is discovered, what follows should be quite familiar to fans of Monster Hunter. Developer Koei Tecmo doesn’t seem ready to change up the classic formula. There are light attacks, strong attacks, lots of mobility, and a traditionally wonky-ass camera.

After the player character dies, they respawn in a nearby river where they’re joined by a friend. After killing some bloated frog and looting the corpse, the duo work together to take down the beast, which has relocated itself under a massive tree with gorgeous pink flowers. After dishing out some damage, the boar becomes enraged, and its tusks glow with heat. A third player joins the fray, and they work together to take down the Kingtusk. They summon more tools, such as an explosive mine and a wall that somehow stuns the creature. Eventurally, they are victorious.

If you’re a fan of the Monster Hunter genre, check out the gameplay trailer for Wild Hearts above. So far, it doesn’t look so bad at all. It is similar to Capcom’s line of games, but has enough variation that it may just stand out on its own. Wild Hearts is set to launch on February 17, 2023.