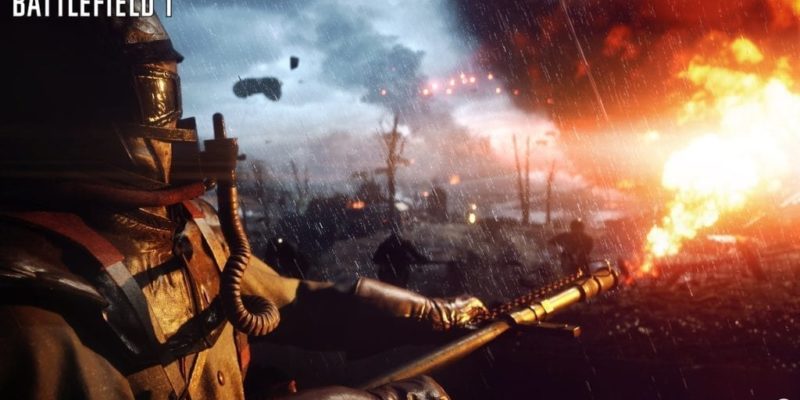 The Battlefield 1 trailer has become the most liked YouTube video game trailer ever. It’s clear that there’s something that resonates with gamers about the new setting. Perhaps it’s merely the exploration of a new war, one not often seen in first-person shooters. Perhaps it’s the old technology mixed with the new. Even the cover features a man with a gun in one hand and a mace in the other while an airship burns behind him. Medieval meets modern.

But this lone, brave warrior fighting amidst crashing airships is a stark contrast to the popular view of the First World War as somber, hellish and pointless. And it raises the question: will Battlefield 1 try to rewrite this narrative?

The Second World War has always proved much more attractive for games of this type, and it’s perhaps with good reason. The Second World War was much more varied in tactics, fields of battle, and the technology employed than its predecessor. But more importantly, there is no consistent popular narrative of the Second World War. It was too big, with too many fronts and factions, for any consistent pop-culture view. Our view of World War 2 includes the likes of Schindler’s List, Hogan’s Heroes, Saving Private Ryan, Band of Brothers, and The Great Escape. And that’s just to speak of the war in Europe. Our view of WW2 has bravery, heroism, comedy and achievement right along with horror, death, war crimes, and fascism. It’s also easy to colour the sides in that war with good and evil, black and white, which plays perfectly into easy stories for mass consumption.

But this has never been true of the First World War. At least in the West, we have a very singular view of the war. It was the pointless war, the one where the assassination of some obscure princeling led to millions of men being thrown into an unending meat grinder. It was the war of trenches. Of attrition. Run into machine gun fire to take a hill, lose it the next day.  It was the war of poison gas, of trench foot, of drowning in fields of mud. And for what? Some system of royal alliances, colonial strife, a delicately-managed power balance finally shifting. There’s no easy black and white, no Nazi-like evil to justify the slaughter.

So is this the First World War of Battlefield 1? I expect not. It’s not a very entertaining picture, and likely not one that’s going to appeal to a generation that grew up on Call of Duty.

Developer DICE’s own statements also suggest that this is going to be a different war. In an interview, DICE has stated that, from their research, they’ve found that the war was much more than trenches, and included many new technologies and locations. There were, they said, air battles and mountain fighting and airships. DICE has also said the multiplayer will be about strategically combining land, sea and air forces. And there are airships, of course, and everyone wants to know if you can fly on of those. While air battles and mountain fighting certainly happened, and while there were Zeppelins, these were minor elements of the war, and of limited importance. World War One was largely fought and won in the trenches of Western Europe.

That’s not to say that the game can’t or shouldn’t spend its time on the aerial battles, or the German U-boat activity, or the truly important naval blockade created by the British. It can look to Italian and Austrian mountain battlefields, and jump between Serbia and the Ottoman Empire. But if it does, it’s a very different World War One than we’re used to. The World War One we know is written in the bleak poems of Wilfred Owen and Siegfried Sassoon. It’s seen in grainy, soundless black and white newsreels that never seem to run at the right speed, in which soldiers charge over the top to be gunned down en masse. It’s pictures of piled bodies, endless rows of white crosses with no names, and moments of silence in schools. We’ve never had the same bombastic entertainment stemming from the First World War as from the Second. Perhaps Battlefield 1 stands to change that.

There is a question, however, of whether we want to change the traditional conception. Historical accuracy is often thrown aside in gaming, and is generally of limited concern. I’m certainly not one to suggest that all games set in historical time periods need to be perfectly true to the real facts and events. But the relative consistency of World War One portrayals has made it something of a sacred symbol. Other wars can have their sitcoms and their action heroes, but this war is all about “never again.”

It doesn’t seem likely that DICE will be making that statement with Battlefield  1. It’s OK for a movie or a book to leave you feeling a little scarred and emotionally drained. But video games, especially ones reliant on bringing gamers back to play competitive online multiplayer, aren’t going to try to do that. They want the adrenaline rush, the fantasy, the personal empowerment that lifts the spirits rather than crushes them beneath a mountain of mud and mustard gas. Even the lone man on the cover strongly suggests the “army of one” mentality, a notion that somehow seems perverse in a war defined by the sheer numbers of battlefield dead. And while the new hand-to-hand combat system may make the fighting more visceral and more personal, it’s unlikely to bring any sense of remorse.

I have no problem with the murder of cultural sacred cows, and maybe this is one whose time has come. After all, World War One ended almost a century ago. The last of its veterans died earlier this decade. Battlefield 1 could well presage a revival of World War One depictions that move beyond its solemnity. But I do hope that something of its darker symbolism remains in them, as well as DICE’s game, so that we don’t begin to glorify the fighting, or try to make simplistic heroes and villains out of a group of states each acting solely in their own self-interest. That was the fiction used by governments to rally the young to die, and the fiction quickly dispelled in the trenches.

It’s possible that the game could also raise awareness of World War One, and teach a bit of history to a new generation. But if it doesn’t, let’s at least hope it doesn’t completely brush aside the horror, the pointlessness, and the loss of life. It may have happened long ago, but its lessons are as relevant now as ever.