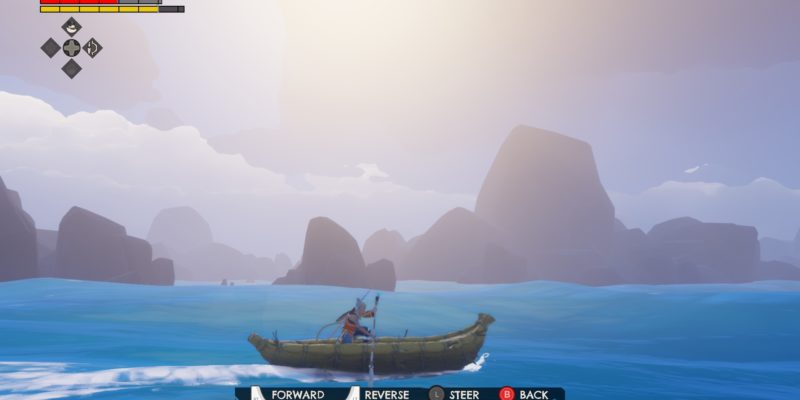 A rogue-lite built around sailing is a great idea. Windbound has a fair amount of those. But there are some big problems. The biggest of these is that the sailing is as slow as it is tedious. There are certainly things to like about the game but it feels like something that’s a rogue-lite due to there being less unique content available. It’s worth a look for people who are drawn to its lovely appearance and the promise of open seas but the game could definitely use some more work.

Windbound begins with our protagonist Kara getting shipwrecked and separated from her tribe. She awakes standing on water and walks through a portal, only to find herself on a strange island. There’s very little story in the game beyond the opening and closing cutscenes, even if you get snippets of information every now and again. As it’s a rogue-lite, I don’t think many will be too surprised nor disappointed by this information.

The game’s overall presentation is excellent and reminiscent of that one game with the blonde guy that no one will ever shut up about. You know the one. Kara is rendered in a cartoony, yet artistically-vibrant style, with an expressive face and a tribal sleeve tattoo on her left arm. The real star of Windbound‘s visuals is the water, though. Watching the tides rise and fall and seeing hints of life under the water’s surface is continually lovely. The game does a good job of capturing the feeling of being out on the water. If only that were enough. 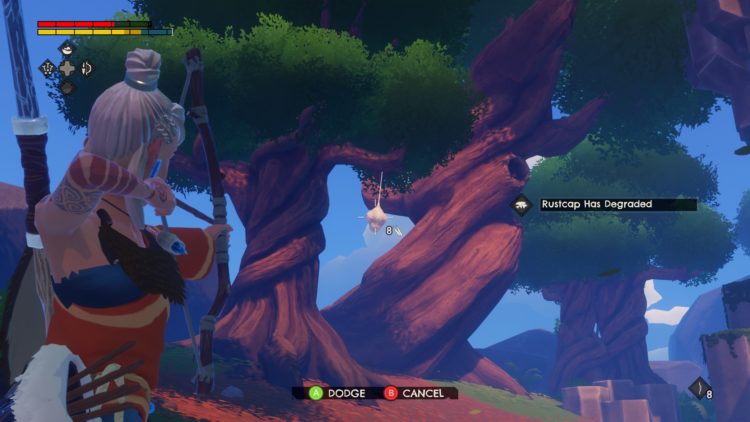 The general structure of Windbound is that the game is broken up into five chapters. When you’re thrown into the first of these, you don’t know what to do on the island you find yourself inhabiting. You grab items, which leads to you getting new crafting recipes, you hunt local wildlife, and you take in the sights. It won’t take you long for you to find your first tower which fills in one of three icons. Naturally, you need to find the other two, which requires making a boat and getting there by sea.

You craft a boat and use a magical oar the tower grants you and set off to find the others. Once you do, you then head toward a distant structure marked by a golden light. Once there, you construct pathways and use Kara’s necklace on an object which teleports her to the first interlude level. You sail forward while braving hazards here before finding an obelisk that allows you to spend some of Windbound‘s sea shard currency on blessings, which are equippable perks. Then you sail through a portal and find yourself in the next chapter. From here, you do the exact same loop four more times but with new biomes being added.

Although I liked the first chapter and subsequent interlude, I found that I liked finding three towers and doing a near-identical interlude afterward to be obnoxious and tedious. After you’re done with chapter one, congratulations, you’ve seen most of what you’ll be doing for the entirety of Windbound. If you die at any point on the default difficulty, you have to start over at chapter one. I hope you really like finding those three towers, as you’re possibly going to be finding dozens. 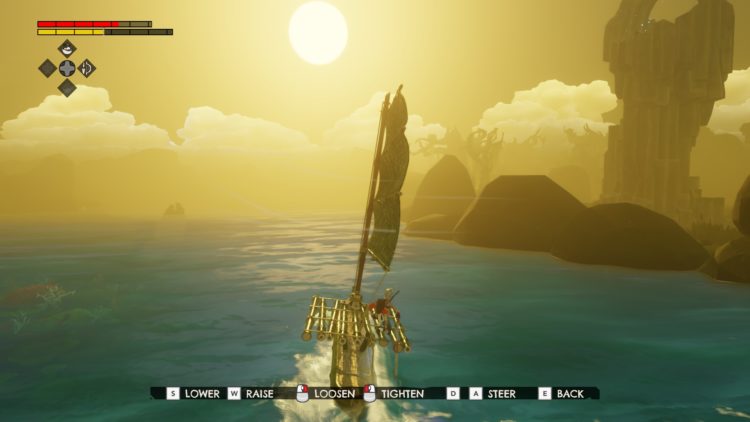 To its credit, Windbound has a non-rogue difficulty called story. If you select this, combat will be easier and you get to restart the chapter you’re on instead of being kicked back to the start of the game. You also get to keep everything on you, save for your boat, which is destroyed. I think this was a great choice, as this game never seemed to me like it needed to be a rogue-lite. Not only can runs take upwards of 6 hours, but things can also get so slow that having to start over after slogging your way through a long trip isn’t something that many will want to do.

Windbound‘s main attractions are sailing, crafting, survival, and combat. The sailing, as I mentioned, is dreadfully slow. You start with just being able to row but you can craft sails too. But the wind blows in one direction for a long time usually, so you can find yourself having to row to make progress. Insanely, you can’t just lower your sails and row. You have to dismantle the mast every time. Which is strangely difficult when you’re standing on your boat, as the game doesn’t like to allow you to highlight the mast. I can’t think of any good reason why you can’t switch between the two freely.

Early on, you can craft canoes out of grass, followed by bamboo and wood. Later you can craft longer boats that you can reinforce with armor. Well, theoretically, at least. Even though I had the crafting materials, Windbound always refused to let me craft these. I have no idea why, but they were always red when I tried to find a spot to craft them. I’m assuming it’s a bug but who knows? You typically need to keep the wind blowing into your sails, but it’s still slow and whether or not you’ll even move is sort of inconsistent. Sometimes I’d stop completely with the wind hitting my sails just right. Other times I’d find myself moving forward while sailing against the wind. Oops. 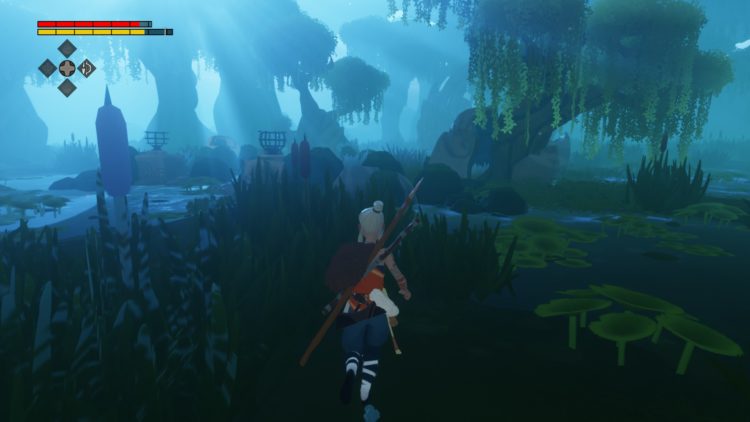 The crafting in Windbound is mostly fine. You can make an ax, hammer, and shovel to mine special ingredients and use them to craft new weapons and gear. There isn’t much gear to craft, though. Weapons are limited to spears and I ran into a bug that wouldn’t let me craft the metal one at all (or maybe I was doing it wrong, I don’t know). I found a metal spear in the wild and it told me that the recipe was now available, but it never showed up in my crafting menu.

The only survival mechanics are related to food. Kara has to eat and, honestly, the hunger system feels about right. She doesn’t need constant food. But food also spoils very quickly. You can pick a mushroom off a tree and have it become inedible in no time. It got to the point where my food was almost constantly spoiling. Meat takes so insanely long to cook that you might as well eat it raw considering the amount of your hunger gauge you might lose from waiting around. Your hunger gauge is also your stamina gauge, so the hungrier you are the less stamina you’ll have. If you get too hungry, your life will start to drain until you starve to death.

The combat is okayish, if a little clumsy. There are several animals to hunt, some of which you won’t be able to really fight with the first spear. You have to be locked on to dodge, which is weird and fighting is mostly clunky and boring but it works. Honestly, it’s better to just avoid dangerous enemies, as Kara can sneak past them fairly easily, and there’s no reason to get the best gear as you’re mostly just going to be going after the three towers. 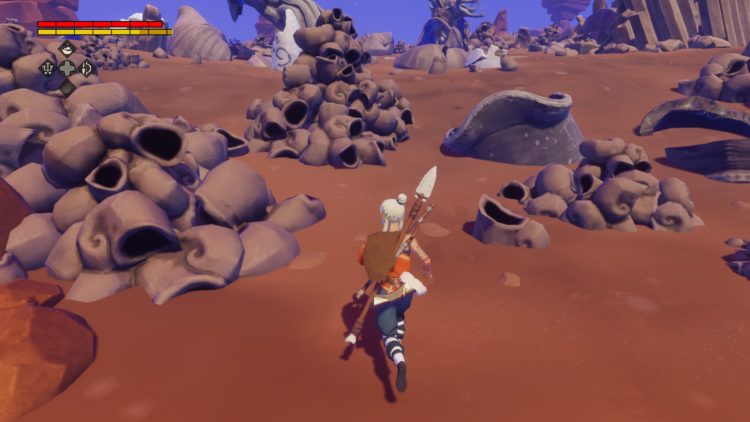 Strangely, the only option upon beating the game is to continue from the start of the final interlude. It’s weird that you can’t keep doing runs if you want to without starting a new profile. Yet another reason Windbound didn’t need to be a rogue-lite, I guess. Overall, there are some solid ideas here that will give some enjoyment to people who are taken by the game’s premise. But it’s too repetitive and tedious to really recommend in general. Maybe if the sailing becomes less of a pain and the crafting actually works more often in the future. 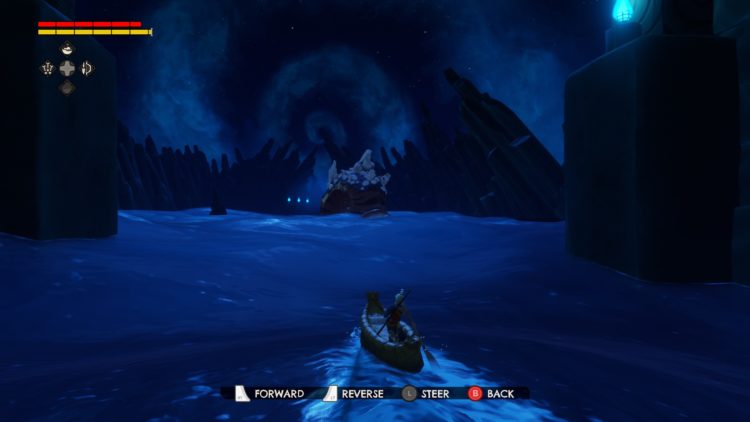 Windbound has lovely visuals and some solid ideas. But it's held back by how old the game's loop gets. Plus, the sailing is so slow and janky that it really . . . takes the wind out of the game's sails. Okay, I'm sorry about that one.