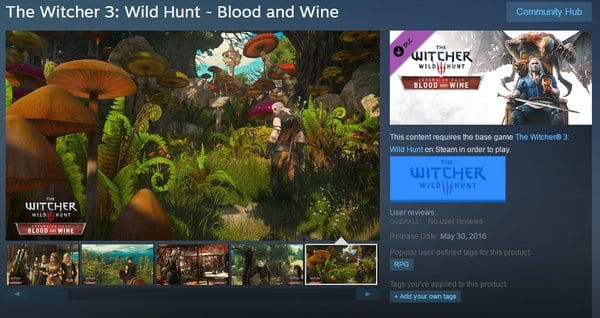 Blood and Wine, the next add-on expansion for The Witcher 3 is probably going to be released on 30 May or 31 May, according to a there-and-gone-again Steam store page listing.

The collective Witcher-senses of NeoGaf noticed the page while it was live, and snapped a screenshot featuring the listed release date. Some said it was given as 30 May (as in the screencap), others saw 31 May. It may, of course, be a placeholder, since the page itself isn’t actually live at present.

Last time CD Projekt talked about Blood and Wine (and released some screenshots), they did say further information would be forthcoming in May. They also said the following: “Toussaint, the new realm we’re creating for the expansion, is unlike anything you’ve seen in Wild Hunt; carefree and colorful, but your gut never stops telling you that there’s some real dark stuff happening underneath all that.”

Stellaris release time is in the afternoon and no pre-load