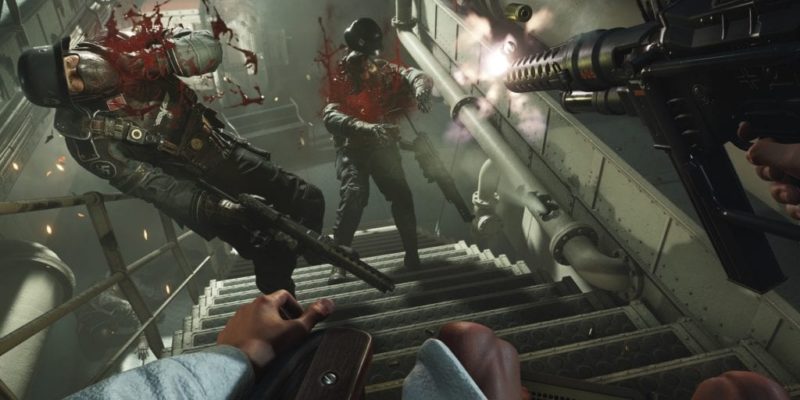 Wolfenstein: The New Order was a pleasant surprise to me, managing to have good shooting (without being a cover shooter), solid but inessential stealth, and a solidly told story. Also, if memory serves, it ran really rather well and looked a bit lovely too. Wolfenstein 2: The New Colossus appears to be following in these footsteps rather well, based on 90 minutes of both playing the game and fiddling around with visual settings.

I’m going to do my best to explain most of the visual and control-y stuff here, but as ever, there is a minor issue in that my computer could probably have a go at arm-wrestling a minor deity. I have an i7-3820, 16GB RAM, and GeForce GTX 1080 Ti. Basically anything should run fine on this setup – although from what I’ve seen, I think that Wolfenstein 2 should run alright on significantly lower specifications. 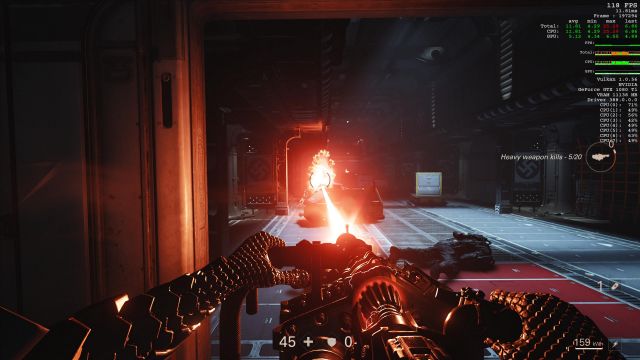 Two brief notes, though. First, the review build came with an accompanying list of known issues, most of which should be fixed by launch. Nonetheless, this does mean that there may be some issues I have that you won’t, or – indeed – some issues that crop up in the launch build which aren’t in the pre-release build. Secondly, Wolfenstein 2 currently doesn’t support the Steam overlay. Achievements are in and work fine, but this does mean a lack of screenshot functionality, amongst other things. I’m not sure this’ll be fixed by launch, but it is apparently being worked on.

Alright, enough chatter. HAVE SOME MENUS IN YOUR FACE. 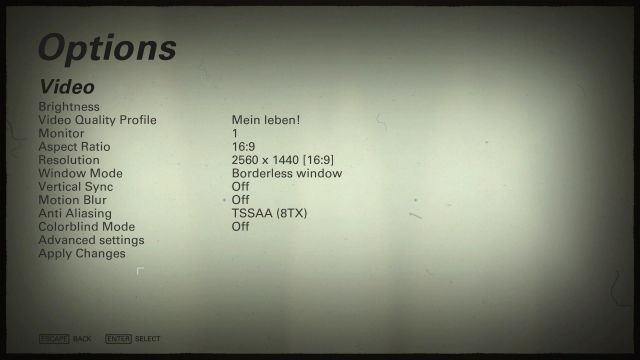 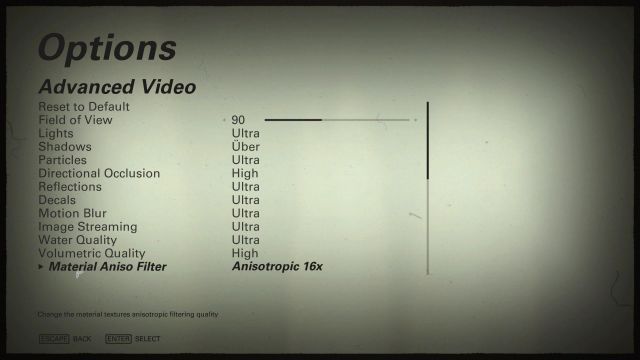 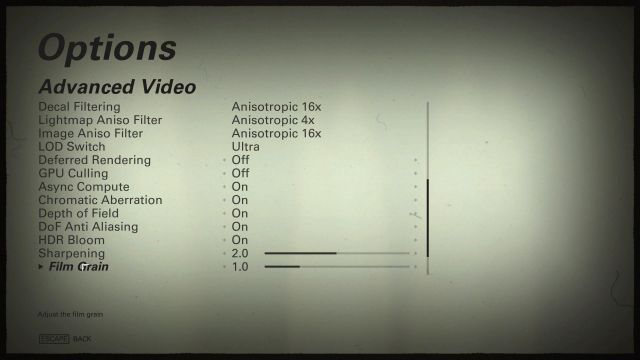 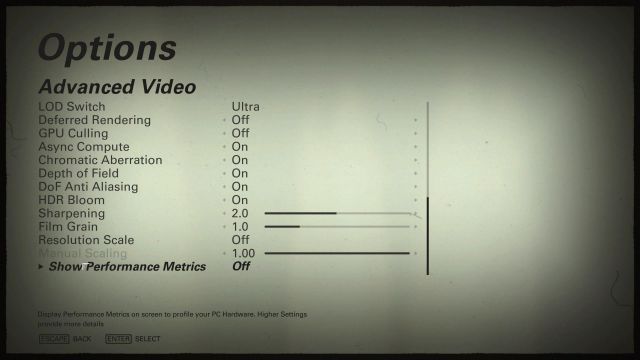 Lots of stuff, there. Not on the fanciest of menus, but that’s a pretty minor complaint when I get three pages of things to fiddle with. In terms of basic stuff there’s Vsync, motion blur, anti-aliasing, and quality presets (ranging from “Low” up to “Über” and “Mein Leben!”).

Delving into the advanced video options reveals far more, including mysterious tweakables like “Deferred rendering” and “GPU culling.” I don’t know what half of this stuff does, and the descriptions are generally amusingly unhelpful (Material Aniso Filter changes “the material textures anisotropic filtering quality”), although a few are vaguely useful. If memory serves, GPU culling’s description basically explains that it culls certain triangles and reckons “Turn this on if you have an AMD card and off if you have a GeForce card”, which is basically what I need to know. Again, there’s no texture quality setting that I can see, which means we may have moved into an era where that’s not a thing. At least not in Bethesda games.

And yes, there’s an FOV slider, which comes complete with a warning that changing it might cause some graphical artifacting. By default it sits at 90 which feels okay, although I was a bit happier once I ramped it up to 100, and didn’t notice any real issues there. Push it up to its maximum of 120 and you get plenty of fish-eye weirdness and some other oddities, what with BJ Blazkowicz having a visible body at all times. The difference in the below shots is pretty noticeable, but the oddities are easiest to see in the third shot. 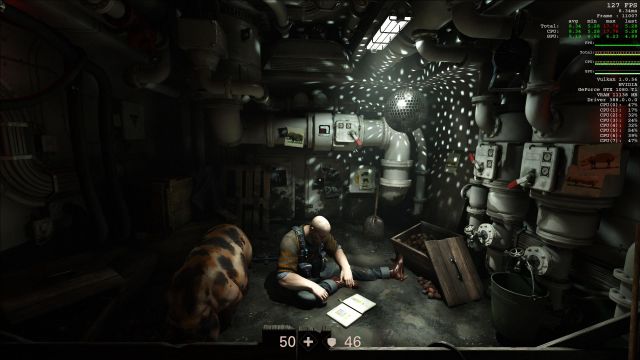 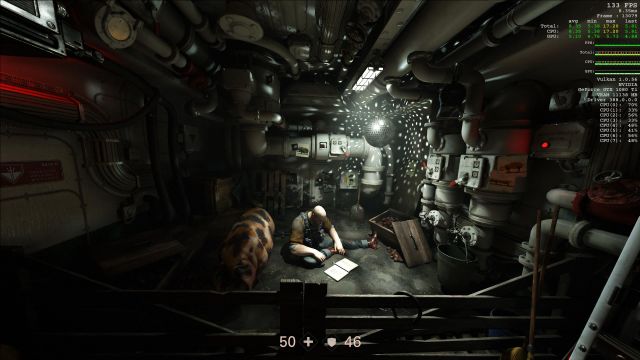 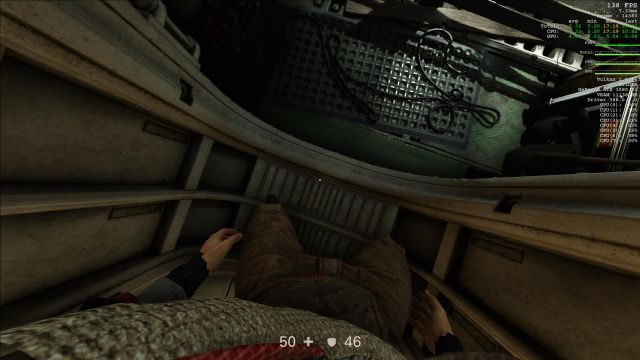 Handily, considering the lack of Steam overlay, there’s also an in-built set of performance metrics, which means I can talk FPS. As with The Evil Within 2 I have no idea what a fair bit of this stuff means, but I’ve left the full metrics on in these screenshots. Perhaps you can divine more information from them than I can.

What I can say is that, with the settings on Mein Leben (but a few personal stylistic bugbears like Motion Blur turned off for the sake of not having horrific screenshots) and the resolution at 2560×1440, the framerate sits pretty happily around 120-130 FPS. Busier segments occasionally drop it further, with the lowest I’ve seen being around 90, though that only lasted very briefly. Low settings boost the framerate by around 30-40FPS. Again, with an average framerate above 100 this doesn’t feel like a major difference, but it might indicate something about Wolfenstein 2‘s scalability. 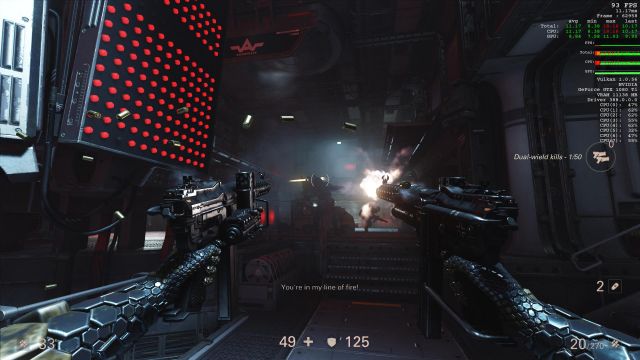 The easiest comparison I can make is probably in the scene below, which I’m also using to illustrate the differences between Low details and Mein Leben detail. It’s not the best example – combat, with explosions and lasers and lighting effects and gore, would likely provide a bigger visual difference – but trying to capture the exact same scene twice in battle is a bit more problematic. 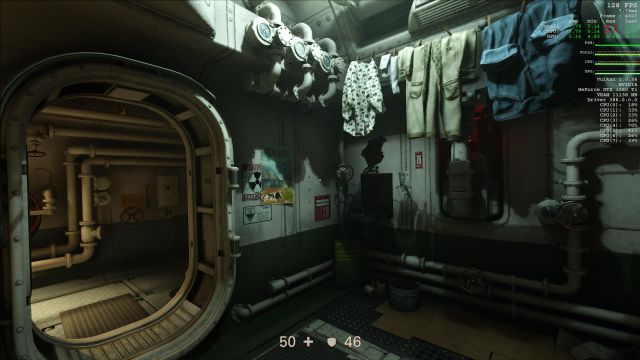 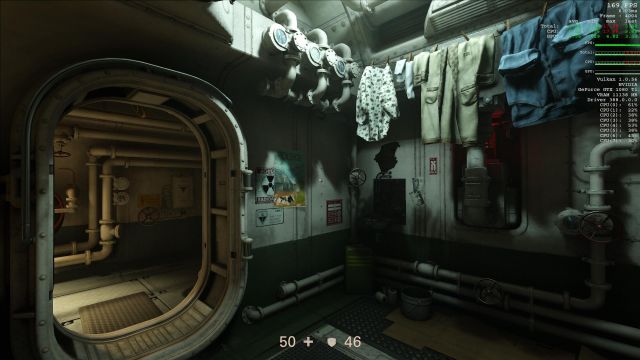 In any case, full visual detail here gives us 128 FPS, while Low ramps it up to 169 FPS. With the framerate constantly updating there’s some variance either way, so those aren’t hard numbers, but they’re within a few frames of accuracy.

Visually speaking, things don’t actually look bad on Low. Assuming I’m not an idiot, that Low screenshot was taken after restarting the game (as certain settings don’t have an impact unless you do that). The big differences are in the smaller details: the quality of the shadows, the lighting on the doorframe, and so on. Again, this doesn’t seem to have any sort of texture quality settings, which means close up views don’t always look mind-blowingly detailed, but the general effects are still really rather nice. Bits and pieces like extra detail on the shadows of, say, a cotton reel in a box of miscellaneous items do help, even if only in marginal ways. 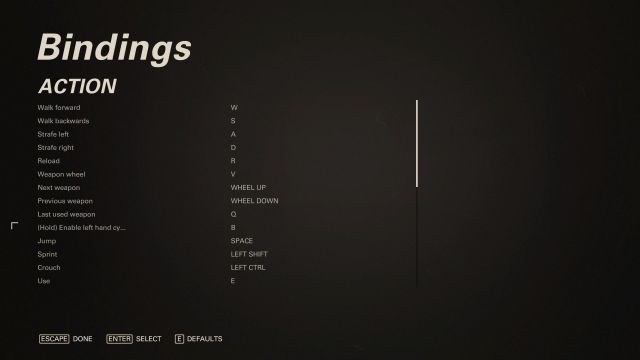 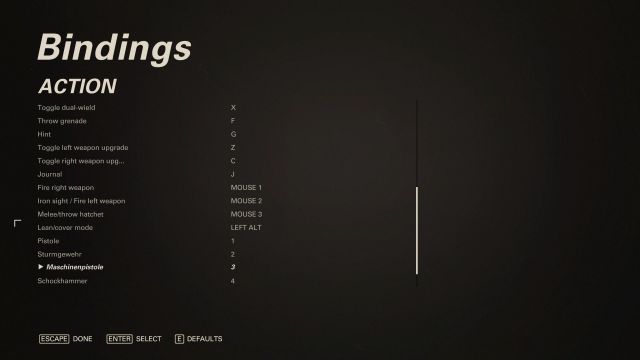 I don’t have many issues with control definition, thankfully. Some controls are bound to the same key regardless of what you do – iron sights and fire left weapon will always be the same button, for instance – but everything is redefinable, and the controls themselves are simple enough to use. The one potential issue comes with the weapon wheel, which can generally be ignored in favour of the number keys, but comes into play more havily with dual-wielding. You can dual-wield basically any weapon by tapping the number key twice, but if you want to dual-wield a combination (a pistol and an assault rifle, say) then it looks like you need to use the wheel to select your second weapon. A minor issue that hopefully won’t cause too many issues during actual play, though, and there is a button dedicated to left hand cycling, though it’s not one I’ve experimented with overmuch as of the time of writing.

As far as I can tell, then, this is a pretty strong showing for Wolfenstein 2 on the PC. It’s plenty scaleable, runs smoothly, and handles just fine on a mouse and keyboard. The second-weapon selection may prove to be a pain in the arse and I have a few minor issues with the lighting (specifically, exposure when looking into dark areas while standing somewhere brightly lit) but I’ve seen nothing that’d encourage me to warn you off.

No need to do this to the developers, apparently.