Yes, there are battles against cyborg dogs and men in giant robot suits. Yes, there’s a degree of mysticism – or at least, there are ancient Jewish weapons of mass destruction. Yes, there are German covers of The Beatles songs, and yes, there are some laughably macho one-liners. There’s a lot of faintly ridiculous stuff in here.

But then, there’s also the level where you have to infiltrate a forced labour camp, lots of talk about “sub-humans”, medical experiments that probably wouldn’t be approved due to ethical concerns, and incinerator rooms full of ashes. Yes, you can dual-wield massive weapons and hold down both triggers will laughing maniacally, but setting-wise this is less “oh, those cartoon-y Nazis” and more “holy shit, this is making me feel very uncomfortable.”

Alright, we hopefully don’t really need reminders that the Nazis were monstrous, but nonetheless… 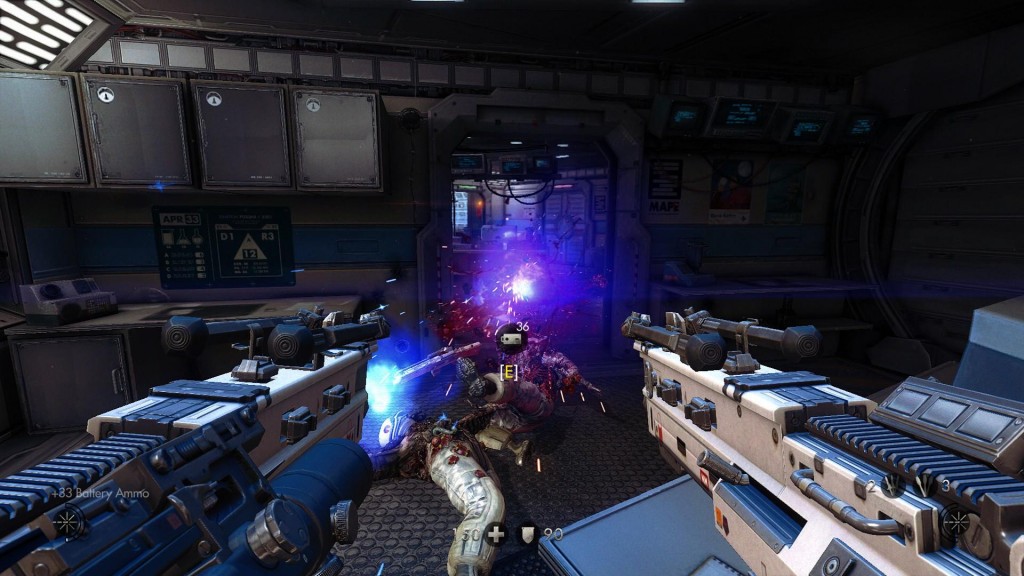 For the uninitiated, Wolfenstein: The New Order casts you as B. J. Blazkowicz, an utterly gigantic American whose LinkedIn profile contains hundreds of endorsements for his skills at murdering Nazis. The game kicks off in a 1946 level as dull as it is brown; at this point, the Nazis are winning World War 2 due to technology hundreds of years in advance of what they should have. Things do not go according to plan, and Blazkowicz spends the next 14 years in a vegetative state, returning to his senses only when the hospital he’s in is closed down and he’s about to be unceremoniously “purged” as a sub-human. In 1960, the Nazi regime rules the world… which just means there are even more Nazis for Blazkowicz to kill than before.

And that, really, is your job. Kill Nazis, find the resistance, kill Nazis, help find a way to fight back against the Nazi menace, and kill Nazis. Also, kill Nazis.

The relationship between B. J. Blazkowicz and his guns is a sort of… bizarre love triangle.

Killing Nazis can primarily be accomplished in one of two ways. You can opt for the guns-out route, charging around levels firing wildly and rabidly slaughtering everything in your path, or you can opt to take a more stealthy route, sneaking around and stabbing them in the neck. More than likely, you’ll have to employ both at different times – and not just when the game commands you to go for one playstyle or another (which it occasionally does, either by having enemies instantly detect you when you walk into a room, or by giving you absolutely no weapons but a knife and no opportunity to get more).

The main reason for this is the presence of Nazi Commanders, who are cowardly bastards that continually call for reinforcements if they spot you. In any area containing these guys, you’ll at the very least want to make sure you know where they are before the alarms go off so that you can make a beeline to them and cut them down. Still, you can either charge directly for them guns blazing, or sneak your way through and stab them in the skull. Both options are entirely viable, and unlike most FPS games with enforced stealth sections, the stealth here actually works.

I guess the Germans are out of Buckingham Palace, then! Instead, it’s… oh.

It works partly because Wolfenstein: The New Order was developed by MachineGames, a studio founded by ex-Starbreeze members. You might remember Starbreeze from the Chronicles of Riddick games, which are best known for being really good movie tie-ins that managed to have really good stealth mechanics. It works partly because enemies are myopic and will usually only see you if they trip over you. It works partly because, even with stealth, you’ve got plenty of options; you can hide around corners, or throw knives from a distance, or perform one-click melee takedowns, or sneak around by slicing open vent covers with your Laserkraftwerk. (Yes, you have a tool called a Laserkraftwerk. It’s a laser rifle that can also be used to slice open steel crates, fences, and vent covers. No, I’m not going to make any Kraftwerk jokes, because I feel like I’m already pushing it with the New Order references.)

Alternatively, you can just shoot everything, and this is also a good option.

Lunatic genius Tekla is probably one of my favourite characters of the year, so far. Well-acted, well-defined, and disarmingly human.

You’ve got a wide variety of weapons, almost all of which can be dual-wielded, and all of which have alternate firing modes. You can lurk around a corner and blast away with an automatic shotgun equipped with shrapnel shells that ricochet. You can pull out a pair of assault rifles, switch one of them to its rocket launching alt-fire mode, and go to town. You can peek out from behind cover with a marskman rifle, or use your Laserkraftwerk to turn Nazis into a messy red smear. All of these weapons have a satisfying sound and satisfying impact. They perhaps feel a touch weak, with most enemies taking more hits than seems right, but it’s kinda hard to notice when you’re unloading 90 bullets from two assault rifles at the same time and the entire room is collapsing in a haze of smoke and sparks.

Both options are expanded through a Perks system which rewards you for completing various tasks; getting kills with weapons from behind cover might let you carry more ammo, or knifing a certain number of Nazis while unseen might boost your movement speed while crouched. None of these upgrades feel particularly essential so you don’t need to continually reload encounters to try to kill five enemies within 10 seconds while using a turret gun, but it’s one of those little additions that’s hard to complain about, even if it doesn’t exactly have an earth-shaking impact.

Automatic shotguns, however, do have an earth-shaking impact. Although not to this chap. Some of the Nazis are surprisingly resilient to anything less than explosives.

Still, you do have to be at least a bit careful, because – while this has checkpoints instead of quicksaves, much to my chagrin – it doesn’t opt for recharging health. Oh, sure, you can recharge up to 20 health points, but that’s not a great deal. You need to find health and armour to keep yourself intact (and yes, happily, you can indeed chew on dog food to regain a few points) but this is rarely too much of an issue. Careful play can get you through most sections, and there’s usually enough scattered around after combat to get yourself back into battle-ready condition. You can even temporarily Overcharge your health by picking up more health than your current maximum, which is ideal if you want to charge in while dual-wielding.

The biggest problem facing Wolfenstein: The New Order is that there isn’t a huge amount which stands out and makes it exceptional. There are some excellent segments like the trailed train scene, some fun locations, a lot of backstory in the form of newspaper clippings, plenty of hidden items to find and bonuses to unlock, a number of tragic moments underpinned by some excellent writing… but for the most part, it’s just an extremely well-assembled game that marries stealth and adrenaline-pumping over-the-top action far better than you might expect.

I wasn’t kidding about the dog food.

The weapons are nice, but – Laserkraftwerk aside – there isn’t a great deal different in there. There are some really gorgeous and unique levels, but they’re mixed amongst the train depots and sewers maps that are rather stereotypical of this genre. There are two paths through the game, but this mostly just changes incidental bits and pieces. I am genuinely impressed with the writing and the fact that this didn’t go for wacky Nazis, instead focusing on what life would be like under a technologically-superpowered Nazi empire, but it’s not quite enough to set this apart.

If there is one genuinely bad thing, though, it’s probably idTech 5. My first time through the game I actually suffered relatively few problems, although Wolfenstein: The New Order was clearly chewing through my hardware like a starving man at a buffet. The second time was a bit more problematic: tearing was abundant, lip-synching was out of time with the audio, texture pop-in was noticeable, and there was a weird multi-coloured haze flashing around fast-moving characters.

It’s certainly a blue Monday – or at least a bloom Monday – when this psychopath gets his hands on you in a labour camp.

I suspect that this is simply down to how hardware-hungry the game is. Most of those symptoms can likely be linked to the video RAM being pretty much completely devoured and the on-screen action being a bit too much for my poor computer… but considering how powerful my computer actually is, that’s a little worrying. Some have said that updating to beta drivers fixes a few of the issues, but if you don’t have a monstrous computer, you might want to be a little wary of picking this up until things even out a bit. Otherwise, your experience will likely be a bit diminished.

The rest of these complaints aren’t an indictment, though. This is a genuinely entertaining romp with more heart than you might expect, and I’d argue it’s probably the best Wolfenstein game since 1992’s Wolfenstein 3D. It’s just that, good as it is, it’s not mind-blowingly spectacular. Wolfenstein: The New Order is a solid, highly-polished shooter that’ll provide around a dozen hours of entertainment, with a unique setting, some good writing, and strong mechanics. That’s all it is, but that’s no bad thing.