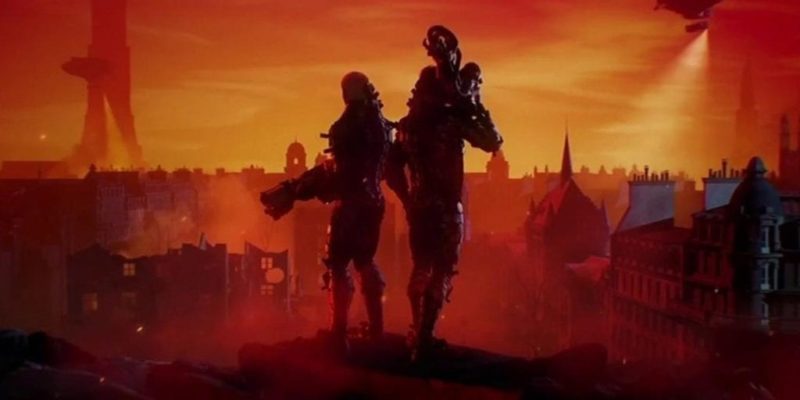 The reboot of the Wolfenstein series managed to do something for me that games have rarely done before: pair finely-tuned first-person shooting with a story worth getting wrapped up in. The games take place in an alternate time where Axis powers won World War II. You, then, play as a character eager to shoot his way through every Nazi he finds. While we eagerly wait for the next main entry which will bring an end the rebooted saga, Wolfenstein: Youngblood is here to sate our appetite. What’s more, you can play the game with a friend!

Killin’ Nazis runs in the family

Where The New Order and The New Colossus put players in the combat boots of B.J. Blazkowicz, Wolfenstein: Youngblood gives you control of one of his two twin daughters. After B.J.’s sudden disappearance, Jessica and Sophia follow his trail to Nazi-occupied Paris. While tracking down their father, the girls find themselves in the middle of the French resistance movement.

The main narrative contains a lot of Wolfenstein hijinks, and it helps make the campaign enjoyable to play through. There are a lot of explosive moments and plenty of F-words directed at Nazis, so seasoned fans will feel right at home. Thanks to how much Youngblood leaned into the series’ identity and its expectedly-great gameplay, I had a ton of fun playing the game. The relationship between Jess and Soph feels authentic. Their banter in battle and the jokes they pull on each other while waiting in elevators make for giggle-worthy moments. 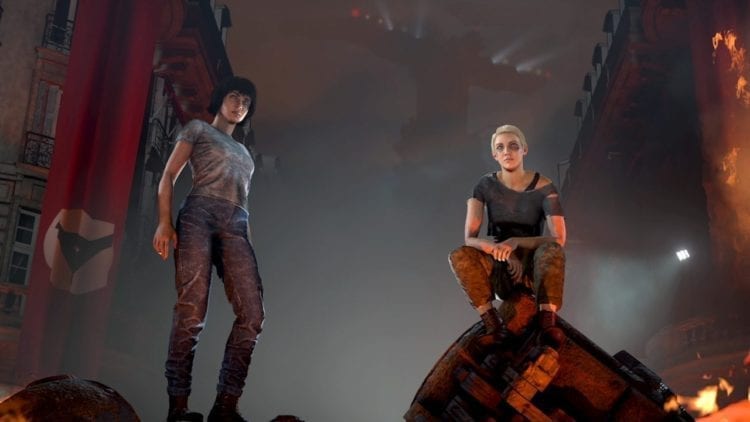 Honestly, my biggest criticism of the game is that it doesn’t have the same high quality of writing that I’ve come to expect in the series. The game’s story just doesn’t have a lot of depth. I honestly felt let down by the fact that it didn’t take any risks. Nothing in it matched the same level of excitement as dressing up as a movie star and traveling to Venus to kill Hitler or having the main character publicly decapitated. Instead, Youngblood’s story felt one-dimensional, and important moments lacked larger significance.

I’ll give you an example. Youngblood makes a big deal of the girls’ first kill, but they then proceed to slaughter countless Nazis with ease. This trope tries to pack what should be a more nuanced piece of character development into a brief cutscene. Though, I get it. The game wants to get into the action quickly. It’s just a weird decision to take the easy way out on a pivotal growing experience. Especially when the games prior dedicated such large sections to moments like B.J. coming to terms with his relationship with his dad and how it affects him as a future father himself.

How Wolfenstein: Youngblood fits in with the rest of the series

Youngblood intends for its story to transitions the events of The New Colossus into the next, and final, Wolfenstein. However, only one of its cutscenes really feels significant to that shift. Youngblood doesn’t add enough to the overall narrative that you must play it to understand the series’ continuity. Sure, it establishes some new characters who will no doubt play a part in the rest of the series. Apart from that, though, I feel that you need only take two items away from this game to comfortably pick up the next one. First, the Twins have a key role in the resistance movement in Paris. Second, B.J. has grown more concerned about the impending apocalypse that was brought up in earlier games. Little else seems important to the bigger picture in Youngblood. 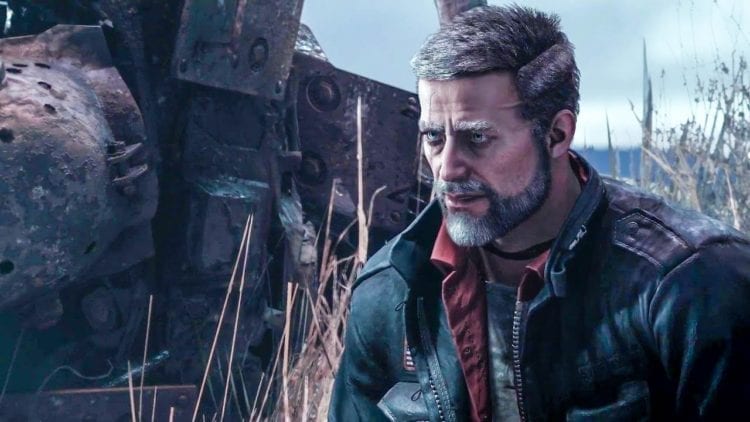 Without a doubt, the strongest aspect of Wolfenstein: Youngblood is how great its gunplay and combat feels. Guns are as satisfying to use as they are in earlier entries. They feel powerful and punchy to shoot while rocking the signature evolved World War II styling. You can upgrade gun components with the game’s currency, adding more damage, different sights, or other tweaks to their performance. You can even add a new skin to your guns, though we could definitely use an expanded variety of customization items.

Most enemies have one of two different barriers, and each of your weapons can break down one of those barriers better than the other. This serves as a good way to engage players more in shootouts. Additionally, it smartly encourages you to swap weapons around constantly. Youngblood further pairs this with ammo that frequently becomes a scarce resource. Even if you’d rather use your shotgun to break an enemy’s barrier, you might have to use your SMG due to a lack of other ammo. 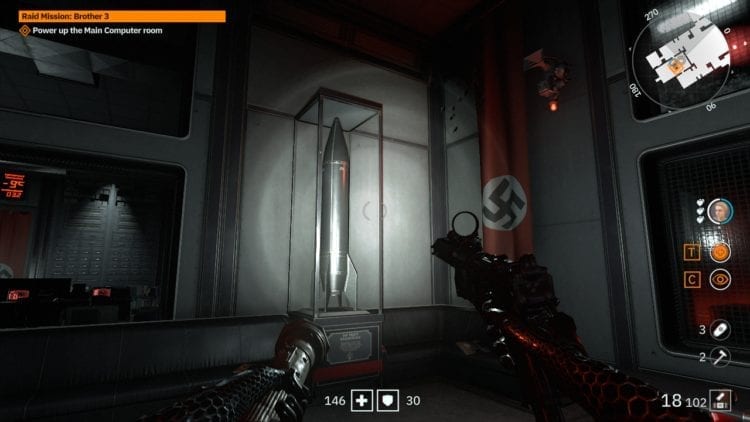 Co-op is a good match for Wolfenstein

Cooperative play makes its debut in Youngblood, and it’s a great fit. You can team up with a partner to play through any part of the game, be it raid missions or side activities. The developers have created most areas with two players in mind. Multiple routes allow you to flank enemies or slip away for a minute of recovery while your ally draws enemy fire.

Most main missions have objectives where you must kill two Nazi generals. If both players are experienced enough, you can go your separate ways to complete the goal quicker. Or you can team up against one, just to be safe. It’d be exciting to find some form of co-op in the next main Wolfenstein game after seeing how well it works here. Maybe B.J. and Anna could team up to save the world?

When you don’t have another person to help you take back France from the Nazis, the game assigns you an AI buddy. I do wish the game had a few more features aimed at making solo play work a bit more fluidly. The game would benefit from partner commands, especially when fighting some of the more challenging bosses. I had to constantly save my partner, who found her way into the worst positions. The AI overall does a decent job, but when complex things are going on (such as the floor lasers during the Brother 1 boss fight or the entire final boss section), your computer companion ends up as a bit of a hindrance. If I could tell my partner to go to a certain position or take a more defensive approach, the game would lose some of its unintentionally frustrating difficulty.

Each of the areas you explore in Paris feel very reminiscent of Dishonored 2. That makes a lot of sense, considering Arkane Studios’ involvement in Youngblood. Some areas have quite a bit of verticality, so you can take advantage of your power suit’s double-jump ability to occasionally sneak around enemies or have a better position for firefights. That said, there are large stretches that are noticeably lacking here when it would make sense environmentally to include a balcony to climb above or a vent to sneak under enemies. I get the impression that the game was mostly designed with the head-on, “shoot up everyone in the room as soon as you see them” playstyle. The capability to sneak around enemies instead of going right through them is simply too inconsistent in the level design. 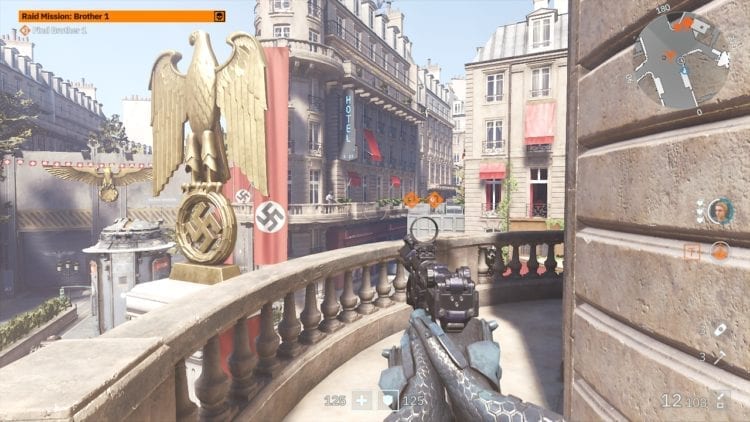 Wolfenstein: Youngblood is so much fun to play, and it’s great that you can finally play a Wolfenstein game with a friend. The guns and firefights are as sweet as ever. While the game has narrative flaws, the combat makes it worth checking out. The alternate 1980s setting where the Nazi party dominates the globe following World War II is rich and full of excitement. It’s a huge bummer that Youngblood doesn’t do much to expand that world. Instead, it seems to rely on players being excited to be back in the world rather than treating them to something truly evolutionary for the series as a whole.

The series returns with its incredible first-person shooting, wild gunfights, and a ton of Nazi killing. Unfortunately, that's about all it brings. The narrative is fairly shallow and it does little to add anything new while we wait for the next main Wolfenstein game.

By A.K Rahming27 mins ago
Reviews