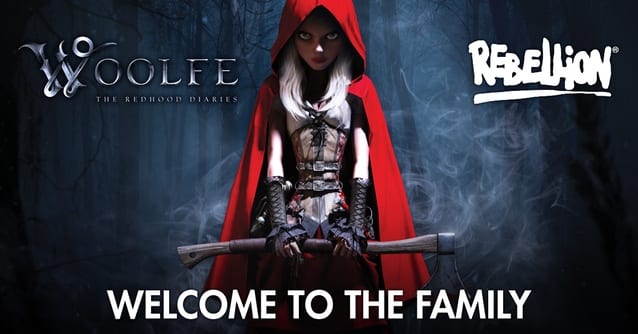 Interesting developments for the Woolfe IP, which is now in the hands of Rebellion (Nazi Zombie Army Trilogy). The game was originally Kickstarted by Belgian studio GRIN, but the first ‘volume’ failed to sell well and resulted in GRIN’s bankruptcy.

Rebellion liked what they saw of Woolfe however, stating in a new update to the game’s Kickstarter page that: “our book imprints have published quite a few dark and twisted retellings of classic tales, and so Woolfe’s gorgeous, twisted take on Red Riding Hood immediately caught our interest”.

The company’s first order of business with the IP is to fulfill some outstanding backer rewards which GRIN were never able to provide.

“We’ve still got to do a full stock-take of exactly what rewards we have, and which rewards we’ll have to produce ourselves, but for now it looks very likely we’ll be able to provide all outstanding physical add-on rewards at no further cost to backers,” the Rebellion post says.

Regarding the existing Woolfe title, Rebellion say that “it’s too early to say if we’ll be able to support the original Woolfe game in the future,” citing the incompatibility between the Unreal 3 engine and their own in-house Asura engine. However, they do say they are considering “all possibilities” about what to do.

That may include a new Woolfe game (or a volume 2), but although the IP purchase also came with some early assets for part 2, Rebellion state “At this stage, we’ve not had time to dig into all the game’s assets and code to properly assess what we have”. Personally, I’m hoping for a schlocky, Red Riding Hood themed, four-player co-op Werewolf Army title.

The company also stresses that no Kickstarter money passed to Rebellion with the sale. They got the Woolfe IP, related creative assets and some physical backer rewards (which, as noted above, they’ll be trying to sort out in due course).