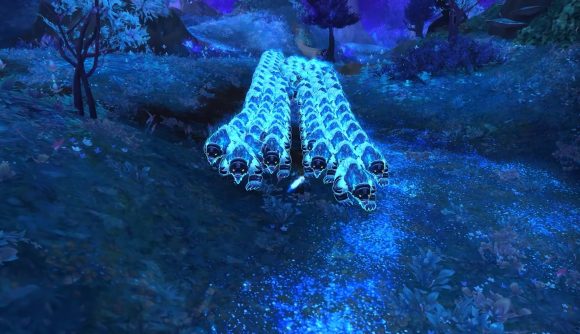 While it has been some time since the release of the World of Warcraft: Shadowlands expansion, it seems that players still have plenty to enjoy in the MMORPG. With the endgame grind supposedly getting easier with the addition of Valor Points in the future, it is prime time to get yourself geared up with the best gear in the game. Endgame content can be tough though. Perhaps you could enlist the help of a glowing blue bear. Or hundreds of them. In the latest exploit for World of Warcraft: Shadowlands, that is exactly what is happening.

As detailed by content creator Archvaldor, players can do this by using the Wrath of Aliothe world quest. Head to the Garden of Night in Ardenweald and start the quest. Quest giver Aliothe will suggest that players take on the form of her avatar, which is a luminous bear. The aim is to cleanse the Garden of Spriggans.

However, if you have other plans for the bear, you can go near the edge of the zone instead. Here, the World of Warcraft: Shadowlands exploit allows you to summon even more bears. By turning into the bear and exiting the zone, you regain your own form with a pet bear being left behind. Repeat the process, and you will soon have a bear army.

Utilizing it may also lead to server lag, especially with huge numbers. While there are no consequences for now, a ban might be coming your way if you are too egregious with the use of the bear army.

For now, you can settle the score with just about anyone with these glowing bears. Or you can marvel at how beautiful they are. It is your choice.