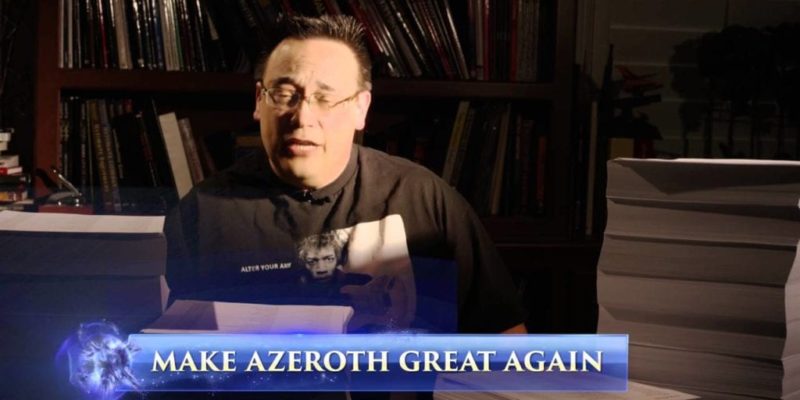 The past few days have been busy for ex-World of Warcraft developer Mark Kern following the success of the vanilla server petition which has now surpassed the 235K required signatures.

Hundreds of pages had to be printed, all of which are being sent to Blizzard’s CEO Mike Morhaime today. Accompanying this open letter release is a video of Mark Kern presenting the case to Blizzard (see below).

What happens once this letter is delivered by Mark Kern to Blizzard remains to be seen although Blizzard did release an official statement late last night stating their current position which includes an option for a “pristine realm” (see full post).

Over the past few days, other vanilla WoW servers that were not forced to close by Blizzard have been rammed with queues of over 1000 players trying to get on. Since the Nostalrius server closed, it has sparked a real interest and enthusiasm from old-school WoW players. Blizzard will hopefully take a serious look at this petition and read the open letter below.

If you’ve not been following this closely, then read our interview with Mark which will explain what’s been happening. You guys were very passionate about it in the comments.

You can read the letter below or watch the video.

As you may have heard, Nostalrius, the fan server you shut down, has a petition calling for legacy servers for World of Warcraft. I’ve got it right here. Over two hundred and twenty eight thousand signatures, and thousands of comments – nearly 10,000 pages in all. I’ve printed it all out because I thought it might be more tangible this way, to see it in physical form.

I also have here, a list of top twitch streamers who have pledged their support to legacy servers and promised to start streaming WoW again if they return. They have a combined total audience of over 14 million viewers. They want legacy servers back and they are ready to share that with the gaming world. It would instantly put legacy WoW as the top stream on Twitch. That’s a lot of support, Mike, and it says something about what players want.

These are the thoughts and wishes of nearly a quarter million people. To put that in perspective, that’s five times the number of people who attend E3, and nearly four times as many who go to PAX. That’s a lot of gamers. They all want one thing, to see vanilla and progression servers for WoW.

I believe it could also be a big boost to the current game. By now, every gamer who has ever wanted to try WoW has already done so. WoW is so big that there are simply no huge swaths of untapped gamers to attract to the franchise. But there are veterans, millions of them, and they miss their home, and their community.

If you provide a home for these veterans again, they will come back. And they will likely play both the new content, and the legacy content. If a fan server like Nostalrius can grow for over a year, attracting nearly a million fans, think how many would come back to WoW if Blizzard launched official legacy servers. Your last reported numbers were around 5M accounts, and by all estimates the current number is much lower now. Why not add another 1M or 2M subscribers?

But beyond that, WoW is also an important game. It’s a part of gaming history. But there is no legal way for people to enjoy its earlier version or to see where it all came from. Unlike the old days, they can’t just boot up a floppy disc or slip in a CD-ROM. The original game is gone from the world forever, and legacy servers are the only way to preserve this vital part of gaming culture.

I would also like to put in a word for the devs who created Nostalrius and launched this whole movement. I’ve spoken to them, and they are good people. They only put up a legacy server because there was no other way to play. They didn’t do it for profit or fame, they did it out of love for the game. All they want is to enjoy legacy WoW again, and they would actually prefer it if Blizzard did this officially an stand ready to help with information, tools and programs. There are hundreds of thousands of reasons, right here, to bring back legacy servers. In the past, you’ve changed games for the outcry of 1 fan. Won’t you do this for a quarter million of them? There’s a lot more I could share with you about legacy servers, and I hope you will agree to meet with me to at least hear what these fans have to say. You know my number, give me

There are hundreds of thousands of reasons, right here, to bring back legacy servers. In the past, you’ve changed games for the outcry of 1 fan. Won’t you do this for a quarter million of them? There’s a lot more I could share with you about legacy servers, and I hope you will agree to meet with me to at least hear what these fans have to say. You know my number, give me call.

Thanks for listening, Mike.