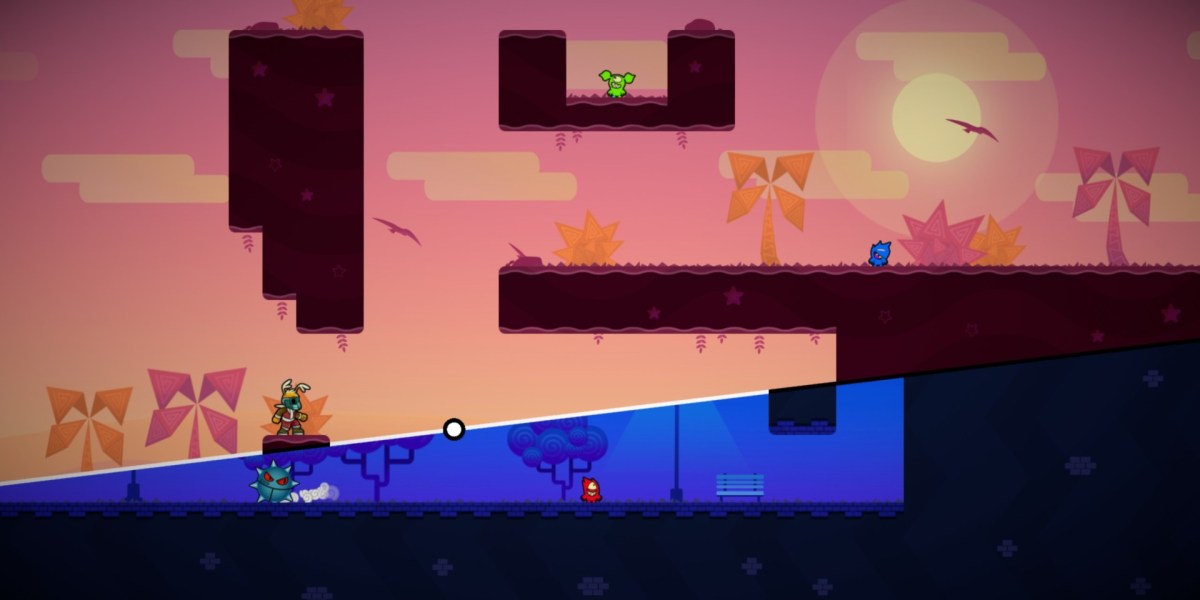 Every now and then, I come across a puzzle game that’s so creative and unique that I have trouble adapting. World Splitter‘s main gimmick involves switching between two worlds. Yes, that’s been done repeatedly, but not like this. The central idea is kind of brilliant, and the game does an excellent job of keeping things fresh. However, it also boasts some horribly frustrating elements, such as one of the most useless player characters imaginable, along with wonky physics that can lead to obnoxious deaths. Fans of puzzle games will find plenty to like, but only if they have the patience for some of the game’s shortcomings.

World Splitter premise is simple. You’re some kind of little dude and you need to save a bunch of multi-colored critters in each of the game’s levels. I’m not sure who the little dude is or why he needs to do this, as there’s just one cutscene at the beginning and then nothing for the rest of the game. Structurally, it’s broken into six worlds with 10 levels each. Each level has a set number of critters to save, plus medals for clearing them within a time limit or by how much you’ve rotated between the worlds.

Rotating between worlds is, of course, World Splitter‘s main gimmick. You don’t simply press a button and swap from one world to another, but you instead control a cursor that can be moved up and down, as well as rotated (of course). Your main method of moving through the game is carefully rotating geometry in and out of existence around your character. You use it to either lift him up, give him a platform to land on, or create a pathway to the exit. All you do to finish each level is simply pass through an open space on the right side of the screen. Seems easy enough, yeah? 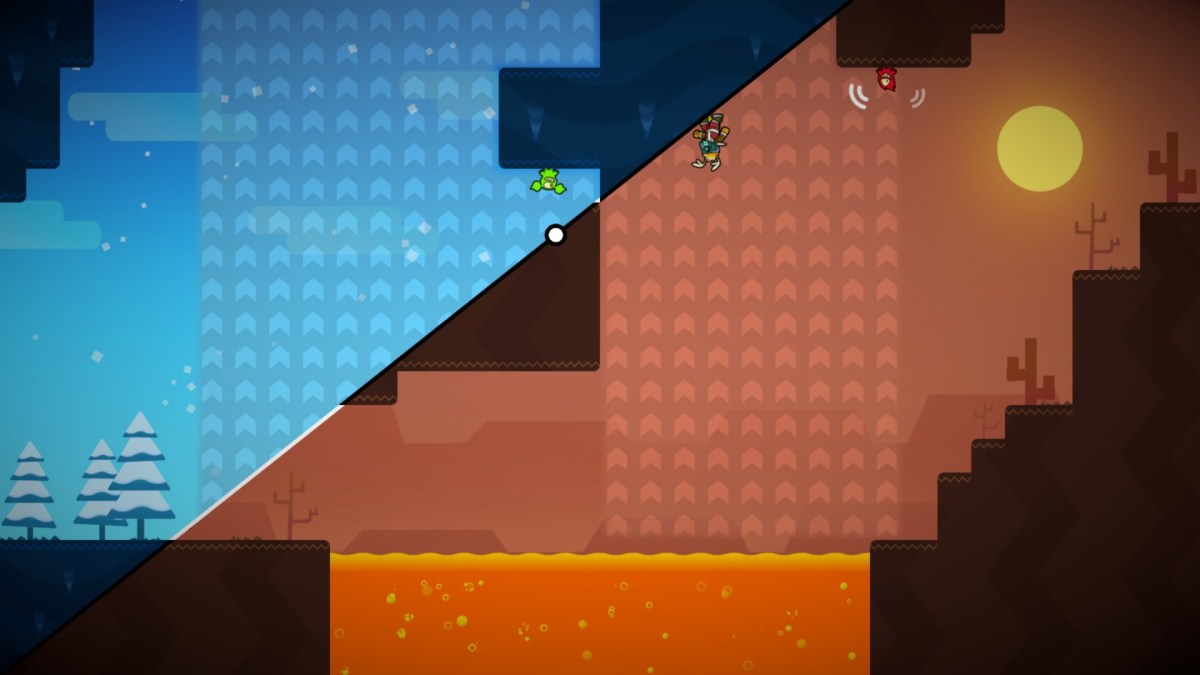 There are, of course, complications. The biggest threat to your success is the little guy himself. In the first paragraph I referred to him as “useless,” and even that’s putting his abilities mildly. He can’t do anything but move, use a very slight hop, flip switches, and look at a preview of the other world. His slight hop is really only for giving yourself a bit of a fighting chance to reach a distant platform. Otherwise, it does practically nothing. It’s clear that the amount of air gained from doing this is limited to keep things challenging. However, it makes the gameplay feel more rigid than anything.

Levers in World Splitter are only used to activate and deactivate barriers. The preview is highly useful, though. Being aware of what world you’re switching to will often be the difference between life and death. The player character dies insanely easily. And anything that kills him forces a restart of the level. Falls into water or lava? Dead. Gets pinched by geometry? Dead. Touches an enemy a single time? Dead. Accidentally goes too high in the sky? Dead. That last one wasn’t a joke. If you launch him a bit higher than the boundary at the top of the screen, something kills him. I’m not sure what, why, or how, but he sucks, so that’s gotta be it.

This is exacerbated by World Splitter‘s subpar physics. You’ll often be lifting yourself up with geometry or walking up ramps to navigate the levels. But the slightest thing will send you flying upward. It’s maddening to almost make it to the end of a level, only to die because you walked up a ramp slightly too fast, resulting in your character flinging himself to an improbable death. It honestly just feels hard to control a lot of the time, a notable problem in a game that requires such extreme precision. You have to be insanely careful while rotating to keep yourself alive, as the slightest mistake is met with having to start over from the beginning. 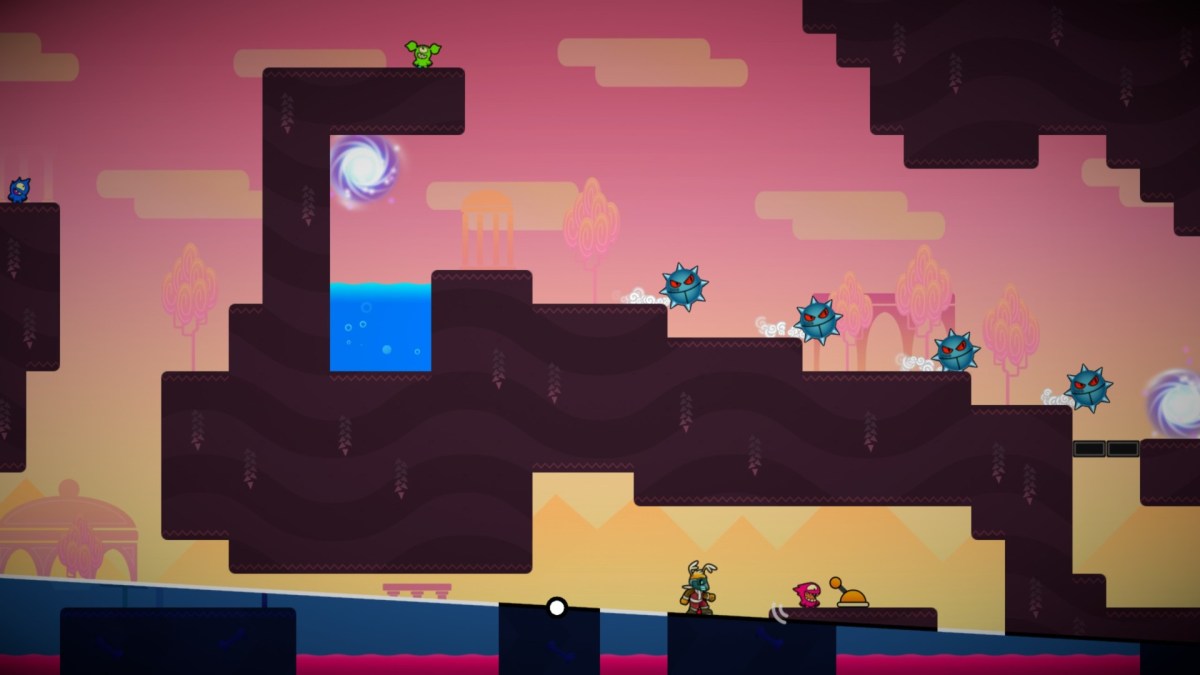 Something familiar, something peculiar

Of course, World Splitter isn’t focused wholly on the “rotating between two worlds” mechanic. Each of the game’s worlds adds wrinkles to the mix. There are spiked enemies that need to be carefully manipulated and avoided in many levels. You can actually fling these into pits some of the time, and it’s rare that you’ll need to go near them to get through a level. There are portals, too. Just like that one game with the portals (I forget what it’s called). Those work exactly as you’d expect: going in one teleports you through the other. But there’s more to it than that.

Most of the time, there’ll be more than two portals in a level. In order to activate them, there must be only two unobstructed at once. You’ll need to rotate geometry to access portals that get you to your destination. Then there are gravity areas that point in one of four directions. For instance, if they’re pointing upward, you’ll constantly be pushed up as long as you’re within the area’s influence. If there’s geometry at the top of the screen, you can walk on it upside down. The same goes for any other direction.

World Splitter mixes and matches these elements, resulting in the stages continuing to feel fresh for the game’s entirety. Though the biggest surprise comes at the end. Once you get to the sixth world, there are no longer just two worlds to rotate between — there are four. These levels are simultaneously genius and a pain in the ass. You basically have to completely relearn how to play the game, which is great for freshness, but it feels more like something that should have been saved for a sequel. 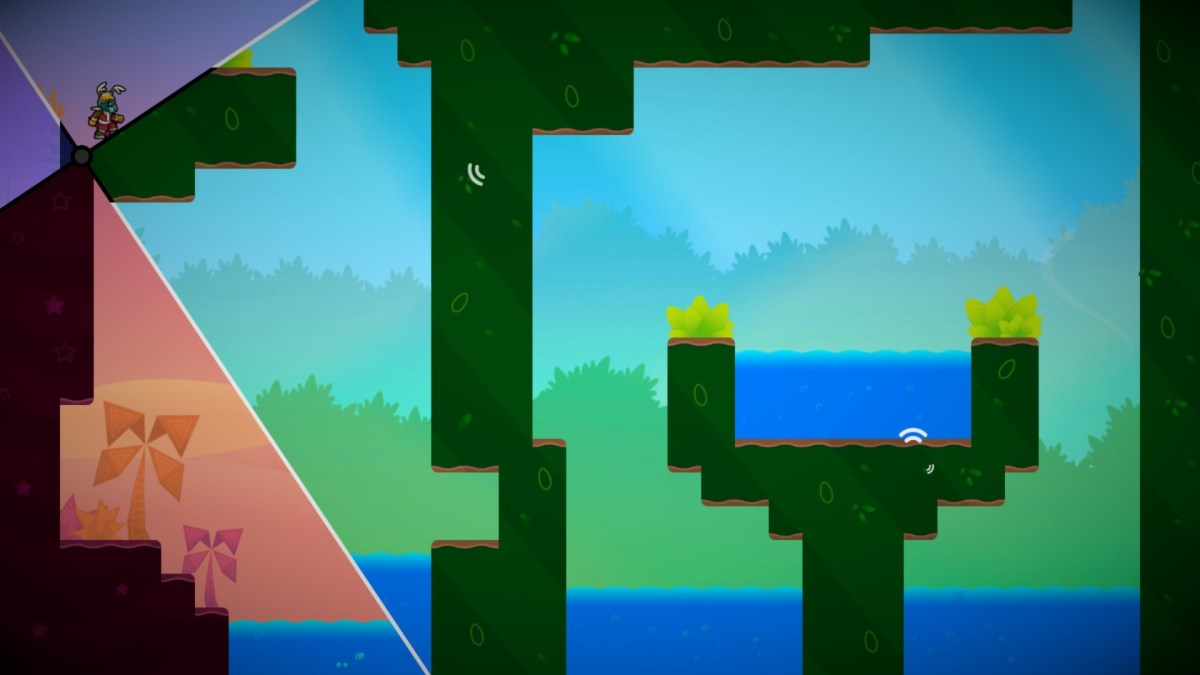 By the time I got a good feel for it, the world and game were both over. These sections are also complicated by how the precision requirements go even higher, plus how the world preview skill becomes too confusing to use properly, leading to a lot of deaths. With just two worlds, the preview tells you exactly what’s there if you rotate to the next. With four, I often found it inscrutable, so I just stopped using it altogether.

I like World Trigger. I think it has some great ideas, but it also greatly annoyed me at times. It takes about five hours to get through, plus more if you want all the medals. I think puzzle fans should check it out, but be prepared for some mechanics that could have used a bit more fine-tuning.

Imaginative mechanics and puzzle design at war with finicky, picky gameplay mechanics. Add in a borderline useless player character and you've got the recipe for a good puzzle game damaged by various annoyances.