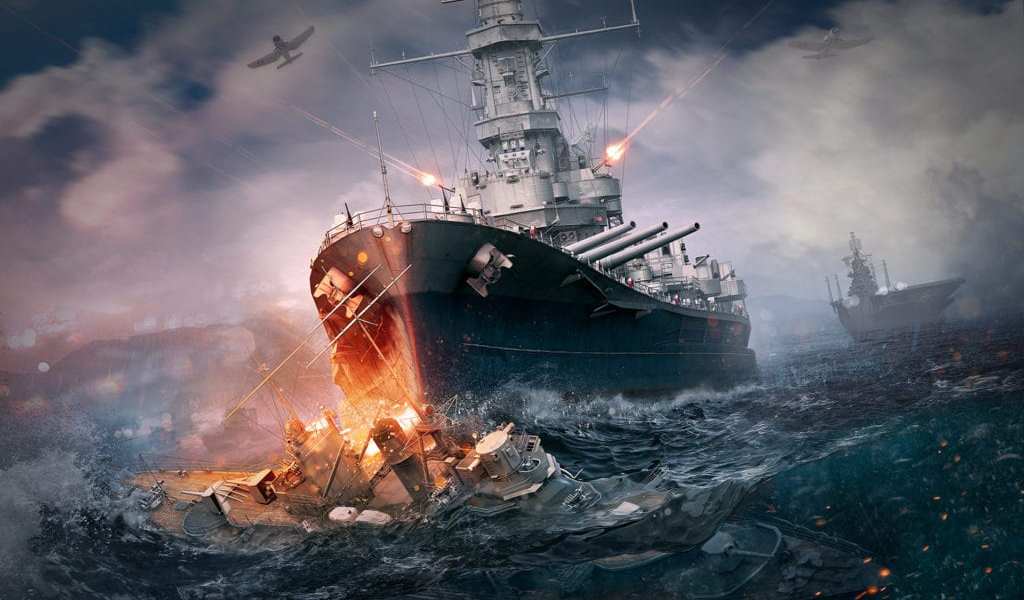 Wargaming, the company behind the critically acclaimed World of Tanks have returned with their third and final entry to what has become a hugely popular franchise in recent years. As the name would suggest, World of Warships focuses on naval combat, with players taking control of a swathe of World War II era units.

The game is free to download and play, with those players who wish to avoid some of the more serious grinding being offered the usual wide array of micro-transactions. These range from £30 ‘premium’ battleships to more affordable ‘premium account’ bundles.

To any players that have dabbled with World of Tanks, most of what I will say will sound very familiar. That’s because, certain improvements aside, this game could be mistaken for a ‘World of Tanks with battleships’. While this would be far from a bad thing, it’s also not 100% accurate.

The game currently allows players to join either PvP or PvE style matches. ‘Random Battle’ mode pits 24 players against each other on two teams, with ‘capture points’ dotted around the map offering players tactical solutions besides all out attrition. Alongside this, you have the ‘coop’ game mode, which pits players against AI opponents. A quick word of advice, these AI don’t miss often. While the gameplay may seem slow and even boring to some, if you are willing to put in the hours, you will find a lot more depth.

It’s a lot more complicated than point and shoot; a skilled player will take into account map geometry, distance to target, speed of his own and the enemy’s vessel, as well as ammunition loaded before firing a salvo. And we aren’t even onto the complex spotting mechanics yet. The game is well balanced, and in most cases balance will take priority over realism, a compromise that needs to be made if you’re looking to capitalise on the audience invested in World of Tanks. It is likely that in future updates we will see more game modes implemented, with Standard Battles, Confrontation and Domination matches currently acting as a strong starting roster for World of Warships.

When the player opens up the game, they will be confronted with quite an array of options. It can be tempting to hit the ‘To Battle’ button without any thought, but you will quickly find yourself in trouble. As I set out in my tier X Yamoto, a heavily armoured Japanese Cruiser, I realised I had made a big mistake. My shots massively overshot my targets, the scout plane I sent out was soon shot down and destroyed. In the end I fell against 3 enemy Battleships in a ball of fire and shrapnel, to the amusement of my allies in chat. I had been overambitious, maybe a little careless. I dropped down to tier V, selecting a Russian battleship. I immediately started having more fun, with the faster and more maneuverable ships twinned with players that were more on my level. I carefully aimed my torpedoes and before you know it, I was finally dealing some punishment on the enemy. At that point I could see how easy it would be to sink time into this game.

In World of Warships teamwork is king, with a well coordinated group of players able to run rings around its opponents. This isn’t just about communication, it’s also about understanding your ship and its abilities relative to those around it. If you’re operating a Cruiser you should use your range to combat enemies, however a Destroyer might want to get up close and personal, unleashing its deadly torpedoes into the enemy’s hull.

Having this understanding already puts you at a significant advantage. This is not an issue for new players, with Wargaming offering not only a standard in-game tutorial, but also online information videos, uploaded regularly on their official Youtube channel. It should be noted however that in most games your teammates will not work together, and in such cases frustratingly disintegrate behind you in a pile of scrap metal. This game is not forgiving.

As with most team based games, I can’t recommend playing with another group of able minded, communicative players highly enough. This adds to the game more than you would expect.

The progression system is intuitive and well thought out. You have separate tech trees for each nation in the game, with classes of ship then being split up across a nations tech tree. These ships are split into tiers, from tier I to tier X. In the lower tiers it’s easy for a player to progress and buy new ships, but as a player approaches tiers VII and VIII it becomes far more difficult and players may feel inclined to invest real world money into the game.

At the end of each match you can read through your battle performance report in great detail, something that can be very satisfying after a good game. Here you can find your credit and experience earnings along with any medals and collectibles that you may have earned. These are also displayed on your profile for bragging rights.

In addition, World of Warships players can also earn emblems and credit rewards by completing missions. Missions are updated on a regular basis and set challenges for the player to complete, with big credit rewards being the incentive. Many of these missions are also tailored towards new players, pushing them to try out different play-styles or game-modes. Personally, I only began to feel inclined to invest real money into the game at around tier VII, at which point you will have put 15-20 hours into the game for free, so it makes sense.

This new entry to the franchise is clean, sharp and fresh. Some players may not like the pacing, but this game is aimed at an audience who have an interest in naval combat; an audience that will expect this trait. This, however, doesn’t stop new players from taking command, with tutorials and missions designed specifically to help said players understand and ultimately enjoy the game more. The graphics do look blurry and outdated at times compared to some of the bigger budget titles on the market, but at the same time managing to do what they have done on the Bigworld engine is a feat on its own. The latest game client can be downloaded for free at Wargaming’s official website.