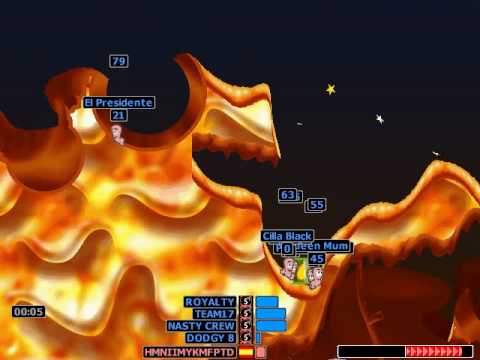 Going by a couple of available sources (ok, yes, Wikipedia and Mobygames) Worms: Ultimate Mayhem (Worms:UM), inclusive of numerous re-issues, re-releases and re-packagings, is something like the 22nd or 23rd Worms release in 16 years. While this demonstrates a certain amount of enduring love for the mid-90s series, it also indicates a remarkable dearth of creativity on the part of developers Team17.

Worms:UM falls under the ‘re-packaging’ umbrella, combining a few bits from 2003’s Worms 3D (the single player campaign, mostly) and all of 2005’s Worms 4: Mayhem. Ignore any marketing which claims it’s everything from both titles, because this is not accurate.

Branching the series into 3D is probably the one major upgrade Team17 has actually made to the series over the years, but while this adds an extra dimension in the most literal sense of the term it also brings a few undesirable changes to the game.
Worms was never the most original of concepts, but it was at least smart enough to take the ‘turn-based artillery’ genre of games like Scorched Earth and add a multitude of bizarre weapons and options for customisation. Destructible landscape was a key component of the 2D Worms variants too, because there are few things more joyful than sparking a chain reaction of explosions that takes out huge chunks of the landscape and sends hapless worms flying everywhere.

In Worms:UM, events like this one just don’t seem to happen. The scenery can be destroyed to a certain extent, but it’s confined to leaving shallow craters in the earth or blowing out a small section of wall from a building. All of the levels have water at their foundations, so any kind of tunnelling is out of the question too. In-keeping with this reduced emphasis on destruction most weapons have had their areas of effect seriously toned down, and the anaemic hole left by Holy Hand Grenades in this game is a sad thing to behold.

The 3D view also results in a collection of minor camera issues, from sudden, jarring swaps between first and third person, to erratic viewpoints when launching worms into the heavens with a jetpack (or similar such toy). As one of the touted upgrades of Worms:UM (along with such wonders as “nicer water effects”) was an “improved camera” this has alarming implications for the previous games.

Of course the other thing the original Worms brought to the Scorched Earth formula was squeaky-voiced skits and soundbytes. Now, this is a subjective, personal view, but the idea of listening to some sub-Alvin and the Chipmunks quipping in a videogame has never really held much appeal. It doesn’t help that Worms:UM leaves … pretty extensive … pauses … between (thankfully skippable) cut-scene dialogue, ruining any chances of inadvertant comedy breaking out. The material is paper-thin to begin with (oh look, a worm stood next to an electric switch, whatever will occur next?), but the lethargic timing absolutely shreds it.

Luckily, there are options to turn off all the god-awful, irritating voices and the oddly somnolent music.

On a semi-positive note, multiplayer (always the strength of Worms) is still a passable experience. An Xbox LIVE Arcade version was used for the purposes of this review, and the LIVE system performed pretty admirably throughout with very little lag and no accidental dropouts. There were the usual problems, of course; people creating games and then forgetting to actually start them up when the lobby is full, along with the tiny babies who ditch a game when they’re losing. But overall it was relatively smooth.

There are a fair few gameplay modes on offer in multiplayer too, from your standard Deathmatch kill-fest, to ‘Destruction’ (where you have to destroy an enemy base) and ‘Statues’ which puts your worms on statue-defence duty. An admirable amount of further customisation is available too, allowing you to mess with most of the rules and parameters of the game (such as how often crates will appear, or how big a role wind will play).

No matter what game style you choose, the deadliest weapon on offer is going to be water. With every Worms:UM map surrounded by the stuff, the quickest way to kill your foes is to send them to the depths of a pond. This is kind of a shame, because it undermines the effectiveness and worth of all the novelty firearms on offer. In fact, even when a spot of drowning is out of the question, it’s often best to reach for a humble bazooka or the dependable dynamite rather than let loose one of the weirder attacks like the inflatable scouser.

Multiplayer also suffers from the problems of 3D detailed above. Removing the linearity of the landscape seriously reduces the potential for enclosed, chain-reaction carnage, leaving encounters feeling rather low-key and drawn-out. It’s pretty rare to kill more than a couple of worms with one barrage or shot, which is not great for a title with the subheading ‘Ultimate Mayhem’. Still, it is possible to eke out a moderately good time playing Worms:UM with other human beings.

The single player, in contrast, is uniformally awful. It features a mish-mash of imbalanced Deathmatch-style levels against the AI (where you have one worm and they have about six) and atrocious platform segments where you have to fart around collecting things like construction site tools. Tight controls have never been the hallmark of any Worms game, and the kind of unresponsive hopping you get here (combined with wonky camera work) means any sort of platforming is just a chore.

Nostalgic players will be delighted/horrified to learn that the same AI problems that have hampered Worms since its original release in 1995 are still present and correct. AI worms have two abilities: (1) The absurd fumble, in which they damage or kill themselves, and (2) The uncanny bazooka shot that soars across the land with pinpoint accuracy despite high winds and reduced visibility. As the campaign levels steadily scale in difficulty, this gradually becomes more and more frustrating.

There are some stand-alone, timed ‘Challenge’ levels too, but these focus entirely on gimmick levels like flying around collecting crates or shooting static targets. Not a huge amount of fun to be had there, unless you enjoy further grappling with the controls and camera.

Granted, Worms has always been a multiplayer-focused game, but since Worms:UM contains the single player campaigns from two separate games, it’s worth noting just how dreadful they are.

Something the title does thankfully manage to get right is the traditional ability to create your own team of worms from a wide selection of hands, eyes, glasses, hats and so on (with more unlockable from an in-game store with ‘coins’ won on missions). Being able to put together a team of freaks in crowns, aviators and twirly moustaches, plus the freedom to name them whatever you like (profanity permitting, one assumes), is a feature Worms still has over most other titles.

Unfortunately, that’s about all it has. Worms:UM feels like a game that hasn’t matured with its audience or with the times, and has barely attempted to update its creaking mechanics in any way. Turn-based, real-time hybrids can definitely still work (look no further than the amazing Frozen Synapse for proof of how to successfully update a classic game style), but it demands a developer who’s prepared to do more than simply re-issue and re-package. The ponderous nature of Worms:UM is resolutely stuck in an era where multiplayer gaming was restricted to takey-turney hotseating, and long pauses between actions were a necessity rather than a bore.

It’s a cruel irony that the one major change made to the Worms formula over the years only serves to erode the fun of the original incarnation. Implemented differently, perhaps 3D could have worked. Yet when its presence adds camera issues, reduces the power of weaponry to destroy scenery and elevates water-deaths to an art form, it’s only reasonable to conclude that it is a failed experiment.
Xbox 360 version review. Also available now on PC. PS3 version is due later this year.

Second Opinion:
John Robertson: The formula may have changed little over the years, but there’s a reason for that – it doesn’t need changing. I agree with Peter that the 3D approach is not the optimum way to play Worms, but the core gameplay remains intact and remains fun.
The price alone makes it a decent purchase for anyone with a soft spot for the series. At the end of the day you could do a lot worse on a day in than playing a few games of Worms with friends. Ultimate Mayhem does nothing to diminish that proven appeal.
*The final review score is awarded based on the main review, Second Opinion comments do not influence it.