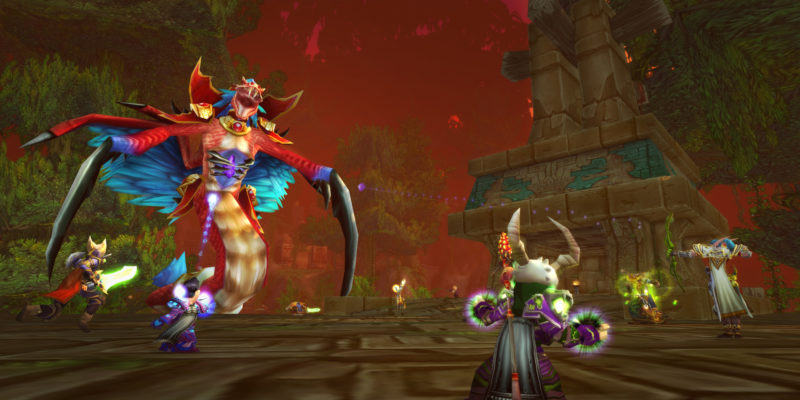 World of Warcraft Classic entered Phase 4, which opens the gates of 20-man raid Zul’Gurub in Stranglethorn Vale and adds the Dragons of Nightmare world bosses outside the gates of the Emerald Dream. But while Zul’Gurub boldly opened its doors to invite players into the fallen Gurubashi city, Hakkar and his servants would not have expected a record-breaking WoW Classic victory for guild “BLaDe of KiLL.”

Zul’Gurub is a WoW Classic raid set in an ancient troll city, where Hakkar the Soulflayer rules. Alongside him, Hakkar has five loyal High Priests, each of which is one of the 13 bosses in the raid. So when you go and face Hakkar, it’s a good idea to get rid of those High Priests, for as long as they live, they will buff Hakkar with an ability of their own, which makes the fight significantly more difficult to the point it was nearly called impossible.

Oceanic guild “BLaDe of KiLL” managed to pull off a feat never done before by killing Hakkar with all those High Priests alive. Even back in the day of the original World of Warcraft, this had not been done before. A few priests alive, sure, but all five? The guild had to go into extreme preparations with very specific setups and buffs in order to get it done, and on top of that, they were one of the first groups to even kill Hakkar in general.

To get a full rundown of all the specific buffs, items, and preparation BLaDe of KiLL went into, check out the details on Wowhead.

Dragons of Nightmare and the stirring of the Silithid

Besides the grand opening of Zul’Gurub, WoW Classic players can now also take a shot at the Dragons of Nightmare out in the world. Check out the Emerald Dream gates in Duskwood, Ashenvale, Feralas, and the Hinterlands, but make sure to bring some properly geared friends because these flying lizards are no joke.

The opening of C’Thun’s prison Ahn’qiraj is also nearly upon us, and the events are beginning to take shape. Head over to Silithus to aid the druids as they investigate the silithids’ hives.

Crysis Remastered gets leaked, and is coming to PC “soon” [updated]