Note: For more information, you can check out our Assassin’s Creed Valhalla guides and features hubs for the base game and the expansion. Likewise, please be reminded that this guide contains major spoilers.

After defeating the Children of the Danu, Eivor will meet with High King Flann Sinna and the other petty kings of Ireland. The council will decide that the remaining druids in the country will have a choice: conversion or utter destruction. Since Barid is already dead, Flann Sinna has no choice but to listen to the remaining petty kings. The plan is to launch an inquisition that will determine whether the peaceful pagans will turn to Christ, or if they’ll be punished.

Ciara, a druidess-turned-bard and former member of the Children of the Danu, objects to these drastic measures. Even Eivor is surprised. 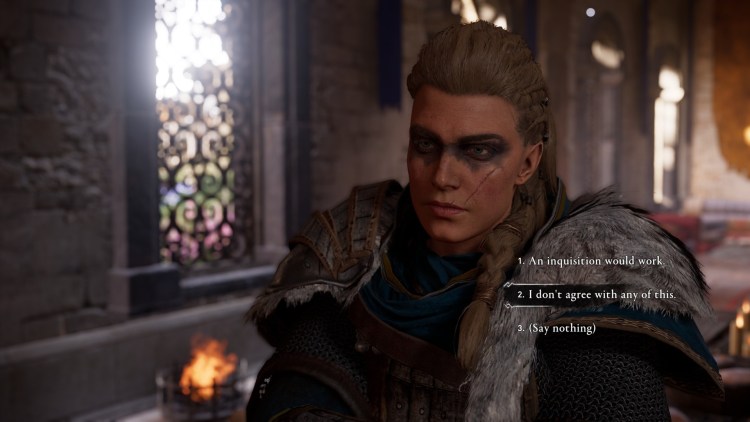 Ciara leaves and Eivor attempts to talk to her, but it’s all for naught. Ciara heads to the Hill of Tara. There, she plans to unleash the power of the Lia Fáil, the Stone of Destiny.

Mount up and cross the countryside with Flann Sinna until you reach the Hill of Tara. There, the High King will try to reason with Ciara. Sadly, she’s already deadset on her vengeance. Throughout the campaign in Assassin’s Creed Valhalla: Wrath of the Druids, you’ll receive a few hints about Ciara’s true power. Now, she’ll manifest her abilities in this multi-phase encounter. This entire fight can take a while, so make sure you’ve got full rations and perks/gear that can help replenish health and your adrenaline meter. There are also a few plants that help with restoration, but these are scarce.

Anyway, the first part involves several mind-controlled soldiers. Flann Sinna will be helping you here, so just try to evade the attacks while taking out the hostile forces. After clearing the guards, Ciara will possess Flann Sinna. You’ll now have a one-on-one battle against the High King.

He wields a greatsword, so try to dodge his slow slashes. You can also time your blocks to lower his guard meter and punish him with a stun attack. Once you’ve depleted Flann Sinna’s health bar, Ciara will materialize. She’ll then use several abilities, some of which would be cast once her health has been cut in half: With a bit of luck, you should be able to dispatch Ciara. You’re then given a choice: you can either give her an honorable death by execution, or you may choose to let her live. If you choose the latter, she’ll walk away heading to exile. She won’t tell you where she’ll go.

High King Flann Sinna, though injured, feels remorse for his decision. He’ll head off, promising to make amends to the peaceful druids. Eivor will then meet up with Sichfrith, son of Barin, who vows to honor his father’s memory by continuing to rebuild Dublin.

Note: Past this point, you can still do other activities in Ireland. You can pick up gear pieces, complete overseas trading requirements, farm resources via Royal Demands, or take out the druids in the Trial of the Morrigan battles. Likewise, you can still eliminate the remaining Children of the Danu cultists that you didn’t encounter during the campaign. Doing so unlocks a quest that lets you fight the demon Balor.