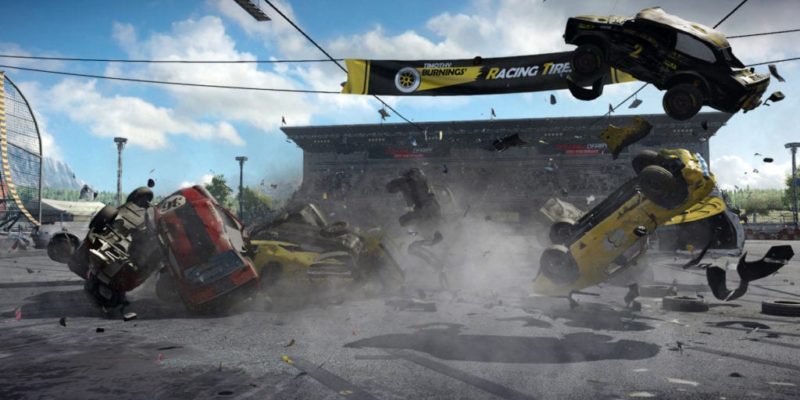 Today, Bugbear and THQ Nordic released Wreckfest’s third DLC, Backwood Bangers. Wreckfest is a demolition-derby racing game with remarkably fun collision physics and a complete disregard for reality. I mean, you can drive a car that’s been smashed into a narrow chunk of metal. You likely aren’t going to win, but you can still try to make life miserable for anyone in the lead.

I hope you wore your brown pants

Backwood Bangers features three new vehicles for our demolition aficionados. These new vehicles include the Outlaw, a classic Hot Rod; the Hornet, a Euro Coupe that can go toe-to-toe with American muscle; and the Honey Pot. As Bugbear puts it, the Honey Pot is the “shittiest racer ever.” Quite literally. It’s an outhouse installed on a go-kart. Let’s hope Wreckfest has some proprietary, shall we say, fecal physics. This continues the tradition of Bugbear adding ridiculous vehicles – after all, in August, they released a drivable couch.

Wreckfest isn’t just a racing game. Above all, it’s about fighting other vehicles on the way to the finish line and doing whatever you can to make it out on top. Also, Wreckfest features a variety of different game modes, such as destruction derbies, challenge modes, and a career mode. You can drive on mud, dirt, or asphalt, and Bugbear’s physics engine shines here.

Several moments stand out: the feeling of your tires spinning in the mud as your understeer into a corner; the ecstasy of ramming another car and seeing them flip over and over in your rearview mirror. When Wreckfest came out of Early Access last year, we called it “a must-have if you love destruction coupled with racing.” Wreckfest also features my favorite racing map ever, the Figure 8, and the chaotic central ramp where cars go to die.

You can pick up Backwood Bangers on Steam for $3.99 USD.

Watch Dogs: Legion creators dive into what it means to be anyone