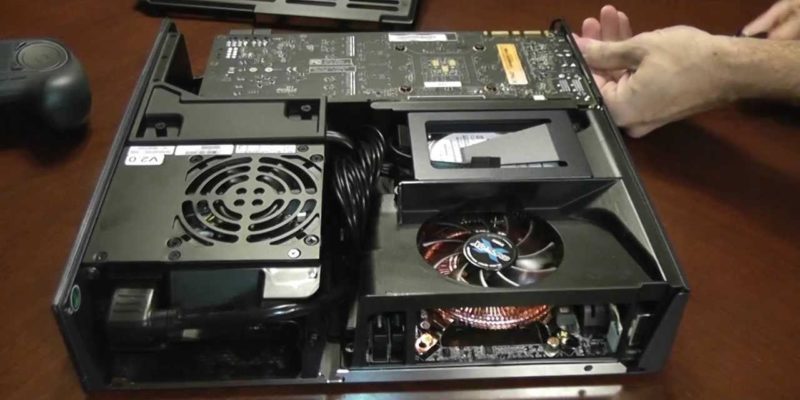 The GabeN powers the Steam Machine.

Corey Nelson has been posting up some great videos of the Steam Machine since it landed on his doorstep, but what is inside the black box of Steamy fun?

As Cory lifts the lid we were sorely disappointed to find computer hardware and not a glowing picture of Gabe Newell wearing a crown that oozes PC power into your TV.

I would probably be crapping my pants at unscrewing anything but Corey doesn’t hold back and pulls out the screwdriver to get stuck in. He doesn’t rip it apart but it’s enough to see what’s going on.

The video card takes up a huge amount of space but it’s all super neat and tidy with the videocard in it’s own dedicated space which will help with air flow. Don’t want that bad boy heating up.

All the housing inside is plastic, and as Corey points out, it’s a tight squeeze inside.

Another video shows the Steam Controller working with a standard Windows PC and it looks like it’s working just fine.

The latest video Corey posted shows the Steam Machine running Windows 7 on a separate HD from the SteamOS. The hardware is a GTX 780 3GB and an I5 4570 processor as indicated on the benchmarking run on Windows.

Banished expected in January for around $20