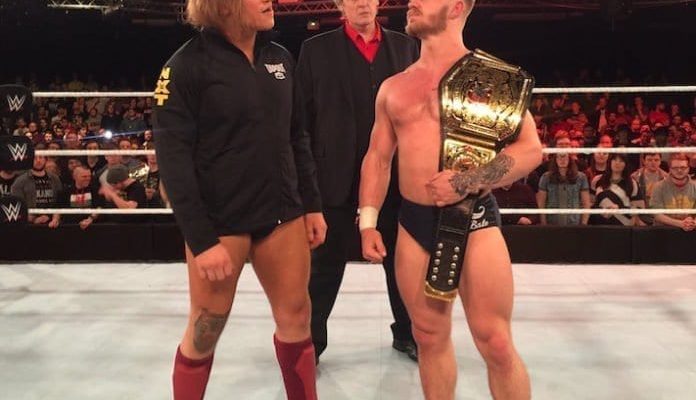 Get ready to twirl your facial hair because NXT stars Pete Dunne and Tyler Bate are set to join the WWE 2K19 roster. The two superstars formed two-thirds of the British Strong Style faction in the independent scene. That trio was rounded out by another fellow Brit — Trent Seven — who teams with Bate as part of Moustache Mountain. This will be the first time that these two young competitors will be part of a WWE 2K game.

The #WWE2K19 roster reveal begins in the UK! We’re happy to announce that #NXTUK Superstars @PeteDunneYxB and @Tyler_Bate will be part of the official roster for the very first time in this year’s game! #i63 pic.twitter.com/6Qh8lQcGJQ

Pete Dunne and Tyler Bate made a name for themselves in the British independent wrestling circuit, becoming top names in Progress. Later on, the two became part of WWE’s United Kingdom Championship Tournament. Dunne and Bate faced off in the finals with the latter becoming the inaugural United Kingdom Champion. Months later, Dunne — also known as the Bruiserweight — would defeat his nemesis in a hard-fought match in NXT Takeover: Chicago.

Their feud would pass and the two, along with Trent Seven, would reform British Strong Style. This time around it’s for a WWE/NXT audience. Dunne still holds the gold as the current UK Champion. Meanwhile, Bate and Seven briefly held the NXT Tag Team Championship before losing them to The Undisputed Era represented by Roderick Strong and Kyle O’Reilly.

We’re quite excited for their inclusion to the WWE 2K19 roster. After all, these two men are some of the brightest young stars in the company today. They’ve had stellar bouts in NXT, and now, it looks like they’ll be headlining NXT UK as well. Lastly, with the Daniel Bryan showcase, it looks like we’ll see a more modern and fresher take on the franchise.

Who knows, maybe we’ll see Trent Seven join the WWE 2K19 roster as well? If not, at the very least Pete Dunne and Tyler Bate will flesh out any possible NXT or UK roster that we’re bound to make in Universe Mode.