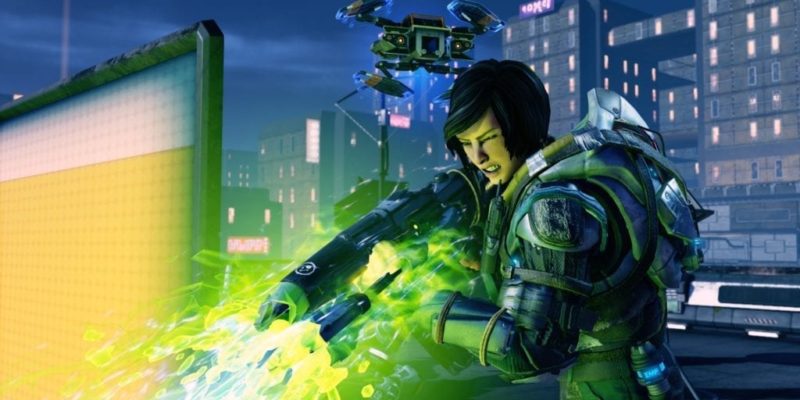 Let’s put aside War of the Chosen and the Tactical Legacy Pack and focus on XCOM 2 for just a moment because it did something slightly unusual for any sequel. Specifically, it was based around the idea that you failed horribly in the first game. The alien invasion was a success. XCOM was destroyed. So, in XCOM 2, you fight a guerrilla war against the alien occupiers.

The Tactical Legacy Pack takes this concept and runs with it, focusing on exactly what happened between the fall of XCOM and the Commander’s rescue at the beginning of XCOM 2. Here’s what’s on offer. 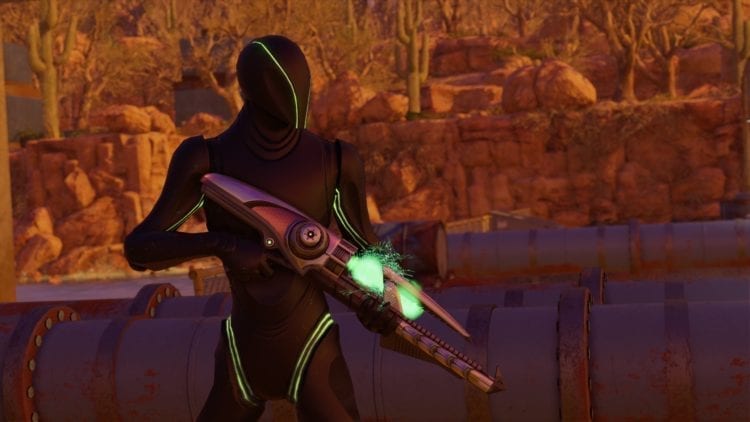 Wait. Weren’t we surprised when these jerks showed up in War of the Chosen?

The Legacy Operations are the biggest, most story-focused bit of content. These are four small, tactical campaigns, each comprising seven missions and absolutely no strategy map stuff.

The first is very Walking Dead-ish, following Bradford (“Central”) as he ventures across the blasted landscape with a group of fellow travelers, gradually changing from a deathseeker to someone actually assembling a resistance cell. The second has him and his team investigating a series of radio signals that seem to be attracting a nightmarish horror from the seas. The third shifts over to Lily Shen and her mission to transform the Avenger – your mobile headquarters in the base game – from a crashed alien ship into something actually of use. Finally, the fourth campaign has the fledgling new XCOM rescuing high-value targets and assembling the rest of the core crew, ending shortly before XCOM 2‘s opening mission.

There are a lot of continuity snarls here (why are these top-ranked soldiers suddenly crap when XCOM 2 occurs? How does Central lose all his gear between campaigns? Why are we surprised by half of the aliens in XCOM 2, when Central has apparently fought them dozens of times before? Why are Chosen weapons available as upgrades?) but hey, gameplay balancing, and as almost every mission is told as Central relating these encounters, you can handwave this as his embellishments. The regular upgrades keep things fresh and interesting in each campaign, so I can roll with this, rather than having soldiers upgrade more slowly across all four. There are also some fantastic little in-jokes and nods to characters that I suspect the community will appreciate, too.

After the completion of each mission, your squad levels up along a predetermined track. There’s no choice of what ability they learn, here. Even their gear is automatically upgraded as you progress. You do get one choice at the end of every mission, which tends to relate to “bonus” equipment. An armor upgrade might get you specialized gear like the W.A.R. or Wraith suits, or you might instead opt for PCS implants to raise stats. But that’s the limit of your choice.

One minor downside of this is that this is all aimed at XCOM 2 experts. While you can always see what abilities do, the game won’t give you details about what equipment does when you’re making your choices. Trying to decide between Hellweave and Bluescreen Rounds? Hope you can remember what impact they both have. It’s been long enough since I’ve played that I couldn’t.

How To Make Things Go Wrong 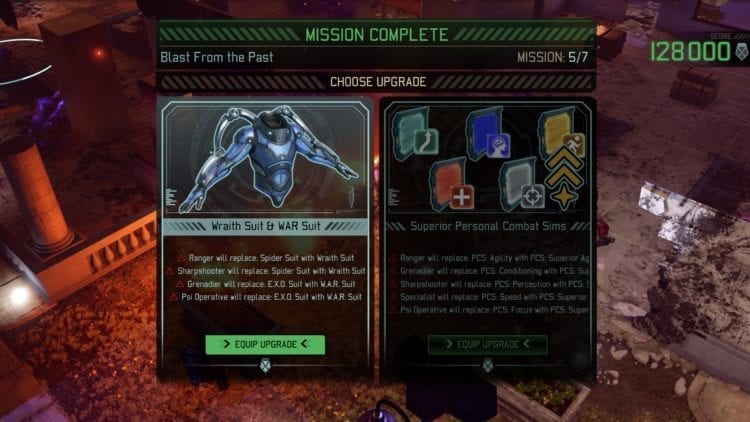 The only non-tactical decision you’ll make, but certainly not an easy one.

These campaigns lead to an interesting shift in balance. Yes, the traditional XCOM mechanic of figuring out how to deal with your plans going tits-up when you somehow miss a shotgun blast at point-blank range, leaving your soldiers vulnerable, is still present and correct. But without the strategy layer in place, and with any dead soldiers replaced at mission end by identical recruits, you don’t need to worry nearly so much about taking hits.

By the final mission of each campaign, you’ll have a heavily-armed squad of fully leveled up soldiers, no matter how many casualties or wounds you’ve taken. There’s no “best soldier in the medbay” to worry about; no panicking over having to use recruits on an important operation. With the exception of one or two missions, you’re almost never in danger of actually failing.

Instead, these mini-campaigns are essentially a combination of score attack and time attack. Medals are awarded at the end of the campaign based on your score. You gain points for completing objectives and killing enemies (with bonus points awarded for doing this faster) and lose points every time one of your troops gets hit or died. While silver medals are relatively easy, competing for a truly high score means beating missions both incredibly fast and without taking a scratch, demanding a perfect blend of tactical skill… and some luck. But this is XCOM, so when your luck runs out, it’s all about how well you can scramble to recover.

Another Skirmish in the War 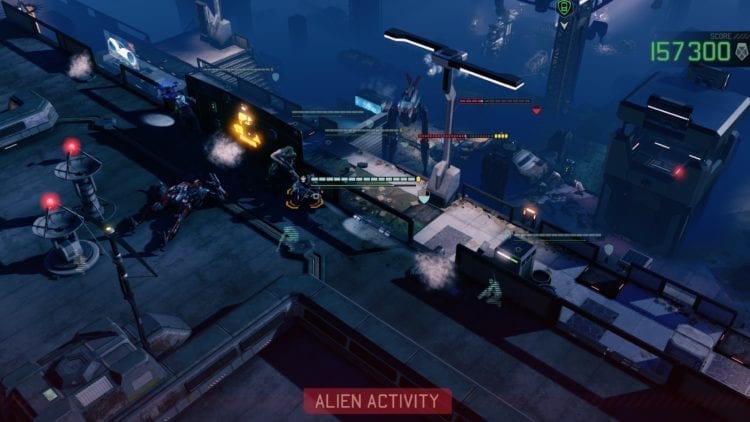 By the end of each campaign, your soldiers are hardened alien murderers equipped with the best gear the galaxy has to offer. Which they then lose, the dummies.

By themselves, those 28 missions would make the Tactical Legacy Pack one of the biggest pieces of XCOM 2 DLC, even though there aren’t any new classes or anything hugely game-changing in there. But while those are the main event, there’s plenty more.

You can randomly generate your own seven-mission campaign if you want more of those, for instance. There are daily challenges, letting you pit yourself against other challenges in the mission of the day. Neatly, there’s also a Skirmish mode that lets you customize a squad, select a mission objective and map, decide on the group of enemies you want to face, and go to town. It’s not a full-fledged mission designer (you can’t decide on placements or anything of the sort) but it’s an excellent little addition for trying out certain things or just giving yourself a bit of a challenge.

And there are some other additions, albeit mostly cosmetic. New weapons and armor models are reimagined (and very scuffed) versions of things from XCOM, and these new customization options and poses are a lot more fitting than some of the frankly ridiculous cosmetic DLC we’ve seen. There’s also a fantastic new soundtrack inspired by UFO: Enemy Unknown/X-COM: UFO Defense, the very first game in the series, which is a lot more high-tempo and guitar-heavy than the other soundtracks.

The Price is Right 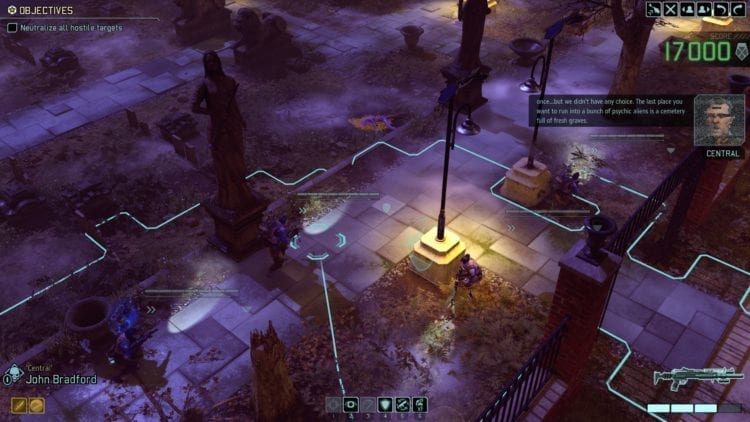 A load of the new maps are revamped versions of fan-favorite maps from earlier games.

It would be hugely remiss of me not to mention one very important fact: the Tactical Legacy Pack is completely free until early December to everyone who owns War of the Chosen. At that point, it’ll cost you $7.99 USD (estimated to be around £6.49 GBP).

If the Tactical Legacy Pack is the capstone to XCOM 2, closing it off before we (hopefully) get an XCOM 3, it’s a beautiful thing. It fleshes out some of the backstory, adds in yet more replayability via the skirmishes and daily challenges without having to worry about the strategy layer, gives us some new looks for our troops, and does so for free. If you have War of the Chosen, I can’t think of a single reason not to pick this up.

Once it costs money, it’s a more difficult sell – but I’d argue it’s still one of the larger and more impressive bits of XCOM 2 DLC, even if most of its additions are outside of the core game itself. At that point, you should already know if a skirmish mode and some more tactical gubbins are what you’re after. But as a surprising, generous, and sizeable offering, it’s hard not to recommend this as a reason to dive back into the fight against our alien oppressors.

No major additions to the core game, but a smattering of skirmish options and mini-campaigns to keep you coming back.