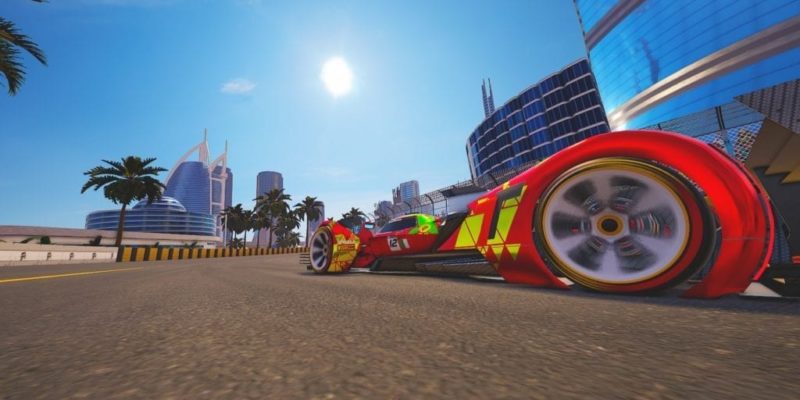 The sub-genre of futuristic arcade racers has seen a bit of a resurgence in recent years, which is why Xenon Racer stands out. Rather than sticking to the status quo by being another F-Zero/WipEout clone, it deliberately defies it by being built on the theme of you taking control of the final collection of wheel-based vehicles before the world transitions to full hover technology before 2031. But, Xenon Racer still does borrow a few familiar aspects of the futuristic racing genre such as blazingly high-speed action, a strategic boost mechanic, and damage meter. All of these factors lead to Xenon Racer being quite an exhilarating experience that left my chest pumping more often than not.

Like in any decent racing game, having skill is the key to victory. That doesn’t change the fact that this is a bit of unrelenting title, though, and it takes some getting used to. Since the tracks lack any sort of shortcuts or alternate paths, the main strategy is finding a balance between drifting and boosting, as they work hand-in-hand. Seeing that all of the 16 vehicles in this game move much quicker than traditional race cars, taking the corners of Xenon Racer’s extremely serpentine-like tracks can be a bit daunting at times.

That’s why my favorite track is the normal version of Shanghai Airport, which has very wide roads and corners and a decent amount of straightaways. It feels rather different from the majority of other tracks in the game. That doesn’t make the others bad, though if they were more like this one, the game would’ve probably turned out to be a lot more forgiving. Nevertheless,  the experience ends up becoming a dance between feathering your throttle and brakes (all of which have a different effect on your cornering), then slamming on the boost button to rocket ahead. When these maneuvers flow together, it creates some awesome moments that not only look cool, but feel rewarding too. But, as I said, that’s when they do flow together.

Oftentimes, especially initially, I found myself careening into corners. That mostly has to do with this game’s interesting handling model. The cars feel heavier than what you might expect, on top of the fact that the part loadout you apply has a massive effect on how each car handles and performs.

The Fast and The Futuristic

Keeping up with its semi-futuristic theme, the cars in Xenon Racer all look fantastic. Even my mother literally exclaimed over one of the designs when she glanced at the screen. As mentioned before, there are 16 vehicles in all, but that’s technically not true. Realistically, there are actually eight cars that come in two versions: normal and performance. The performance versions are more powerful, as the term suggests. Being able to paint specific sections of the car is a cool feature, and despite there being a lack of a decal editor, I still found the customizer to be enjoyable. My favorite car is the WPL 01, as to me, it offers the most balanced stats out of the collection. Even after making changes to the other cars, none of them felt as responsive as the WPL, especially when it came to drifting. As I alluded to earlier, upgrades would often result in negative changes that left my car feeling unbalanced, which makes a lot of the parts seem redundant. That’s what kept bringing me back to the WPL, as it retained good performance with minimal upgrades. That’s also why it didn’t take long before unlocking new cars and parts in the Campaign mode meant nothing to me.

Speaking of the Campaign, it took me about 10 hours to get from the first race to the last. In between all that was a mixture of adrenaline and frustration. On top of the aforementioned turn-heavy track design, Xenon Racer‘s AI also presents a challenge. Not only do the cars handle differently, but even their behavior is different than in traditional racers. Bumping into AI opponents usually results in your car collecting damage without much reward, so it’s better to focus on overtaking the other cars. After pulling ahead, I found that consistently blocking trailing racers was the best way to keep pole position, as your opponents will slam on their brakes or careen themselves into corners all to try and avoid hitting you. Mind you, this is their behavior in ‘Easy’ mode, which is activated by sifting through the Options menu rather than it being toggled before you start a race.

While AI rubber-banding isn’t present, I never saw an opponent get reset from taking on too much damage, unlike your own car. On top of that, every race seems to have a driver that’s programmed to win, so unless you overtake them, they’ll be miles ahead of the rest of the pack. Considering that you begin every race in last place, it becomes a fight for first every single time. 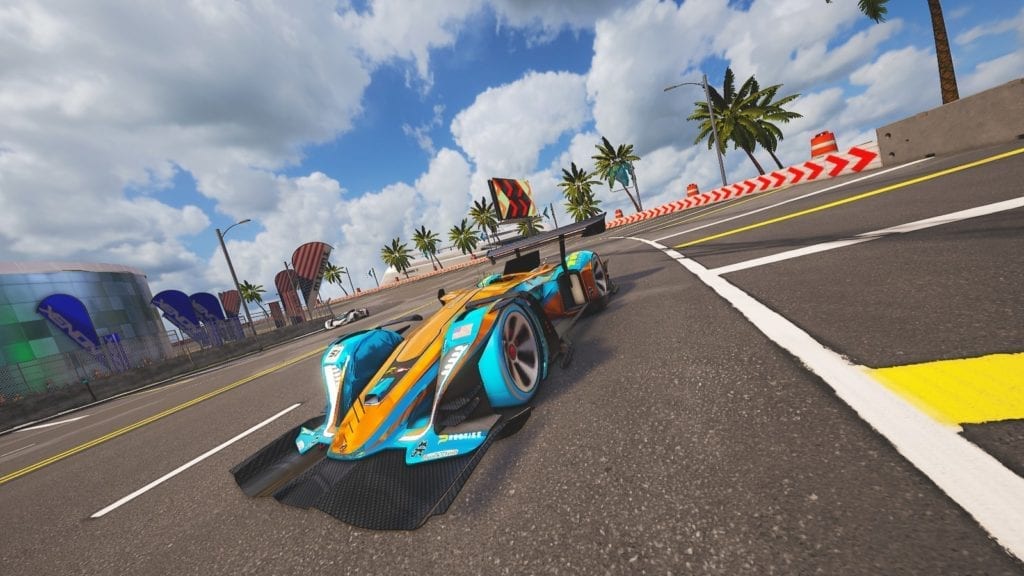 Xenon Racer leans more on the difficult side, but finding the perfect race strategy is a rewarding experience.

Get in the Slow Lane or Get Outta the Way

What really annoyed me about the Campaign mode, though, is its weird layout. There are multiple paths, but they’re not optional; all races need to be completed to get to the end, and completion is only achieved by coming in first place (minus the first four races). But, weirdly enough, even though I’ve won every race, some of them show that I’ve never completed them. This led to a partial roadblock that prevented me from accessing a few races, but I was able to move onto other races that take place after them and still got to the end. That aside, it would be nice if the confusing layout could be changed, and also if races were properly labeled. There’s no way to tell how difficult a race is prior to engaging, and seeing that there are different race types (Normal, Checkpoint Attack, and Elimination), there’s hardly anything that identifies them as being different.

At least Xenon Racer has environments that stand out. Its small collection of tracks are all based on real-world locales such as Miami, Dubai, Canada, Japan, Boston, France, and China. Since Xenon Racer is set in the near future, the environments don’t look radically different from today, but they do have a sleek aesthetic that blends nicely with the cars and a healthy amount of scenery objects. I just wish there were a larger variety of tracks, as you’ll often find yourself racing on the same tracks repeatedly. 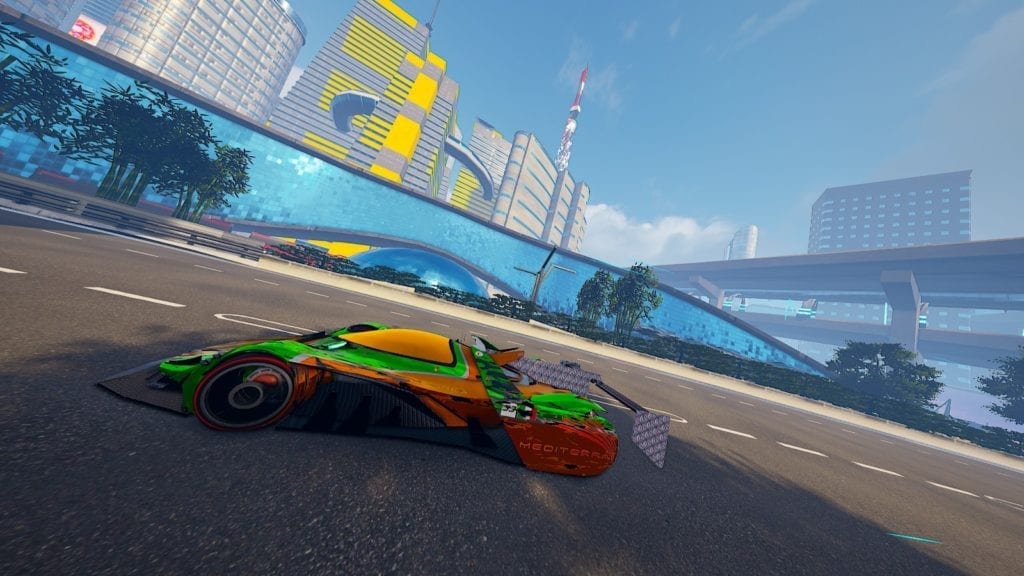 It is rough around the edges, but Xenon Racer provides a slick experience that stands out.

Despite its handful of issues, Xenon Racer still provided an awesome racing experience for me. Its unique take on the futuristic racing sub-genre helps it to stand out. Hopefully, the team at 3DClouds can iron out the rough edges, but even then, I’m still enamored with the game’s beautiful visuals,  awesome sense of speed, hype soundtrack, and tricky-fun track design.  Yes, it is a bit on the difficult side, which might turn-off more casual race fans. But if you’re willing to put up with the challenge, there’s definitely a solid title here.

3DClouds' Xenon Racer provides a semi-futuristic racing experience that's a bit rough around the edges, but is incredibly exhilarating, albeit challenging.

The Walking Dead: The Final Season Review – A Fitting End