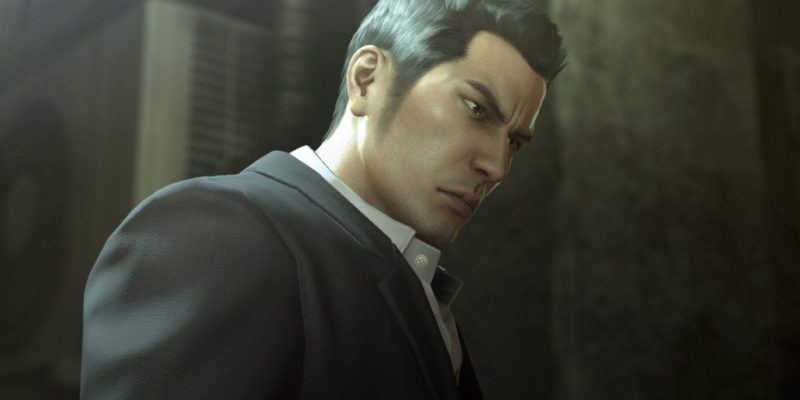 Western fans of Sega’s long-running Yakuza series have already been blessed once this year, with the long-awaited localisation of Yakuza 6: The Song of Life releasing on PS4. Now, however, after a thirteen-year stint as a console exclusive, the series is finally making its debut on PC, starting with the 2015 prequel Yakuza 0.

The Yakuza series has been a Sony exclusive (bar a strange occurrence where HD remasters of the first two titles appeared on the Wii U) since its debut. Something which Sega seemed determined to never step back from. In time, the company started to renege on their console exclusives — bringing select titles to the PC; Valkyria Chronicles and House of the Dead Overkill, among others.

Now, however, PC owners with a taste for the brawling, narrative-heavy, slice-of-life quirkiness which only Yakuza (and Shenmue) has ever been able to deliver, is rapidly approaching a PC release — with Yakuza 0 launching on Steam on the first of August.

Where better to start the narrative-epic of a series than at the beginning of Kazuma Kiryu’s journey? 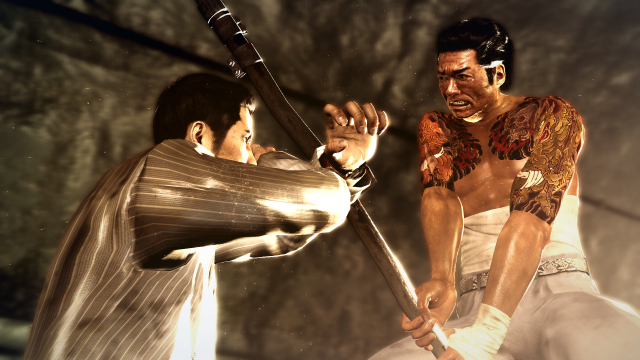 The original Yakuza title (2006, PS2) busied itself with a twisting tale of betrayal, backstabbing, and brawling. Series protagonist Kazuma Kiryu emerges from a ten-year prison stint after taking a fall for his friend regarding the murder of his family patriarch. He finds that the entire clan and family structure is about to be shaken to its core, and that his former friends and future ally/rival Goro Majima are all entangled in a complicated web of events which will define the future of everybody involved.

Rewind, then, back to 1988 — 27 years before Kiryu emerges from jail for the core of the first Yakuza game. 1988 Kamuracho certainly lacks a few of the features which series fans will remember, the most notable being the Millenium Tower, which serves as the headquarters for the Tojo Clan throughout.

The future site of the Millenium Tower is the cause for the chaos behind Yakuza 0’s plot. A plot of land in the middle of a planned Tojo development has become the focus of several major criminal factions, and the head of the Clan declares that whoever secures the deed to the land will be promoted and put in line to be the next chairman of the clan. Naturally, chaos and double-crossing ensue — tearing up the Dojima family (of which Kiryu is a member), the Shimano family (which Goro Majima is attempting to rejoin), and the Omi Alliance (a dangerous rival to the Tojo Clan). 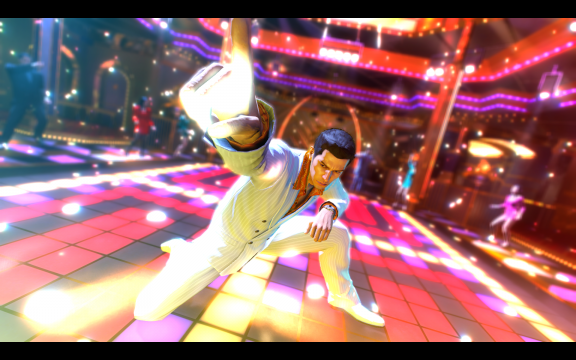 I won’t hang on the story for long, as Yakuza games have always had densely-packed stories and I’d be liable to spoil twists from the game. But, as a fan of the series, it is always great to get more background to characters who only featured briefly, or were mentioned in passing in the first game. Goro Majima’s story, especially, is an interesting evolution; the character becomes an unpredictable wildcard in future games, one who is as likely to fight against Kiryu as he is alongside him. However, in Yakuza 0 your time playing as him shows a compassionate, sympathetic character who is trying to escape from the claw of the Omi Alliance after he is ‘placed’ on their territory following pre-game events.

It’s also interesting to have characters so essential to the spiralling plots of Yakuza and Yakuza 2 — Shintaro Kazama, Futoshi Shimao, Sohei Dojima, and Masaru Sera — appear so prominently in the story. This is, admittedly, something which new PC players probably won’t appreciate unless they enjoy the game enough to pick up Yakuza Kiwami (the remake of the first) when it launches in the near future.

Where the previously developed title, Yakuza 5, followed five characters with interlacing stories, in 0 the number is rolled back to a much more reasonable two. Kazuma Kiryu, who very rapidly finds himself on the run from his former colleagues after a murder links him to the deeds of the development plot, and Goro Majima who finds himself enlisted to perform an assassination which reveals hidden loyalties, and cracks between those racing for the plot. 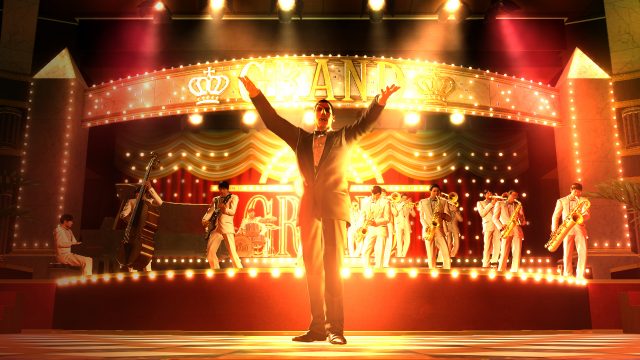 The two characters never actually cross paths, although certainly exist in orbit of one another. Kiryu’s story explores Kamuracho, the red light district where most of the games spend a large portion of their time. It’s a dustier, trash-laden version of the area we’re used to seeing — not least due to the absence of wealth from a profitable Tojo Clan, and the decades of infrastructure improvements it naturally saw as time passed. Meanwhile, Majima exists in Sotenbori, an equivalent district within the Omi Alliance’s territory.

Each region comes with a large side activity tied to the playable character; for Kiryu’s Kamuracho he can start a real estate business to try and break the monopoly of The Five Billionaires, who have a firm grasp on 50 of the region’s properties. This involves buying out the properties and recruiting staff to keep your businesses profitable. It’s simple fun, and quickly shifts the value of money in the game — a strange thing when the Yakuza series is one where you can buy varying food and drinks around the game world. As well as defending your area from the rival factions, you can engage in strange Money Battles wherein you throw money at somebody to make them go away.

If that sounds peculiar, then Majima’s equivalent mode will probably overload you: Cabaret Club Czar sets you against rival cabaret operators, The Five Stars of Sotenbor. Majima’s efforts must be spent on recruiting, training, and then managing hostesses during your shifts. The Five Stars’ grasp over Sotenbor has parallels to Kamuacho’s real estate rivals — there are fifty interaction points (be they bought or gained through side-missions) which advance your domination over the competition. The Cabaret Club Czar gameplay has you rushing around completing small tasks for your hostesses in a timely manner — grab more ice, give words of encouragement, etc — as to keep them talking to customers and, as such, grow your potential audience. There’s a dress-up component of it, as well as training options. 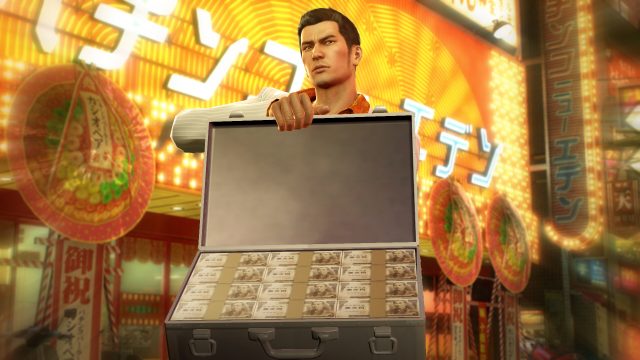 These side activities are easily the best way to earn the amount of money the game requires for you to fully upgrade Majima and Kiryu’s combat trees. They also serve as blockers on certain combat techniques — so players who are more vigilant will unlock better combos and attacks for use while partaking in the core activity of the game: beating the pudding out of people.

Each of the two protagonists has three fighting stances which they can shift between whilst in combat. Kiryu, for instance, has his more conventional ‘Brawler’ style, however later he gains agility-based Rush, and strong, weapon-based Beast stances which really allow you to adjust your speed and strength to enemies. Beast style, where you automatically grab weapons, is especially useful when it comes to fighting the Strongmen type enemies who will shake you down for money when they fight you — something best avoided in a game where money directly translates to new ability and skill unlocks. Majima, who starts as a ‘thug’ feels slower, however, Slugger brings weapons into the fray and Breaker… well, breaker, which is similar to Brazilian Capoeira, is a lively and vertical fighting style which is really fun to play with. Combat is enjoyable, and while it isn’t as pure as Yakuza 6’s RPG-style system, it is enjoyable and diverse enough that it doesn’t get boring in the 30~ hours which people will spend pursuing the main story (I can’t speak for those 150+ hour, 100% runs I’ve heard about).

When not turning hard-asses into putty, the game really shines through the minigame and sidequest systems. Yakuza 0 is as full of quirky characters as any of the other outings; boy bands, meek dominatrix, and Magical (not Michael Jackson) Johnson are among the many distractions from the grim, betrayal-filled story. Perhaps most importantly though, the mini-games have bled through into the main game which now walks you into fishing, karaoke and more even if you are trying to avoid distractions. And then, of course, there are the arcades with claw machines straddling Space Harrier and OutRun machines. Fishing, Batting Center, and Slot Car Racing are other activities which will be hard to avoid — Yakuza 0, as with the series as a whole, rejoices in nonsense and frivolities amidst their narrative chaos.

As a stand-alone, Yakuza 0 is a fantastic title. Admittedly, some loading times are a tad longer than is comfortable (as a sign of an ageing engine), and some of the translation work feels a little bit out-of-time. However, as a game with a story to tell, and a world to explore, it’s easily one of the best games out there — and it stands strong in an undefined genre along with the Shenmue games, and maybe the kooky-crazy-whimsical extremes of Deadly Premonition.

Perhaps more important, however, is how it handles as a port. The game’s minimum requirements are modest, requiring an i5-3470 with 4GB RAM, and the GTX 560. I’m running an i7-4790 with 16GB and a GTX 780. Yakuza 0 ran seamlessly for me, I noticed no slowdown, and while there were a few moments where anti-aliasing and weaker textures stuck out, it wasn’t enough to ruin what is a story-driven game. Critically, there was no slow down in combat, even in Majima’s more flair-y Breaker style. I didn’t spend very long tinkering with options, but there were ample resolution and key-mapping options including uncapped framerates. I did, admittedly, play using a controller — for which I have zero regrets.

Yakuza 0 is a fantastic title for those who enjoy a game with droves of story, brawling, and a little bit of strange humour. I will be continuing playing through towards 100% over these coming weeks, which is the first time I’ve said that about a game in a long, long time.

Yakuza 0 will be available on Windows PCs from the 1st of August.

Yakuza 0 delivers spirit, humour, and a twisting-story, perfectly capturing the series in its a long-awaited debut.

Over 2.5 million people played A Way Out