If you’re reading this, you’re probably wondering why we don’t have a full Yakuza: Like a Dragon review. To this, I can only say “It’s coming, probably.” Without going into the gory details, slightly late code and then a full restart of the game near to launch has delayed things a bit. Prior to (or in place of) a full review, we’ll have some other Yakuza-related content going live: guides, features, the tech review, and hopefully more.

Yakuza: Like a Dragon, like all of its predecessors, is full of minigames, side-stories, and sub-quests. Like its predecessors, several of them are utterly, bloody infuriating. Here, the one that’s most likely to give you an aneurysm is the Kappa statues quest “Kappture the Kappa.” For better or worse, it’s definitely worth doing, and this guide should show you where to find the things.

This is available via the Part-Time Hero app as early as chapter 5, but you can’t access all of the Kappas until chapter 7. However, the rewards include a cool 2 million yen, which is a hefty chunk of money at any point of the game. What you need to do is find 10 Kappa statues hidden around the city and snap photos of them. In this instance, “hidden” is not a lie: one or two are fairly easy to find, but some of them are complete bastards.

Luckily, I’ve created a map pinpointing all of their locations, complete with screenshots and descriptions. That two mil is as good as yours.

Let’s start off with a brief overview of where all of them are. Here’s a handy-dandy map showing roughly the locations of all 10. I’ve put them in a rough order going counter-clockwise from the easiest to find, but obviously you can go in any order you like. Just bear in mind that numbers eight and 10 are gated until chapters 6 and 7 respectively, which is why I put number 10 as the very final one. 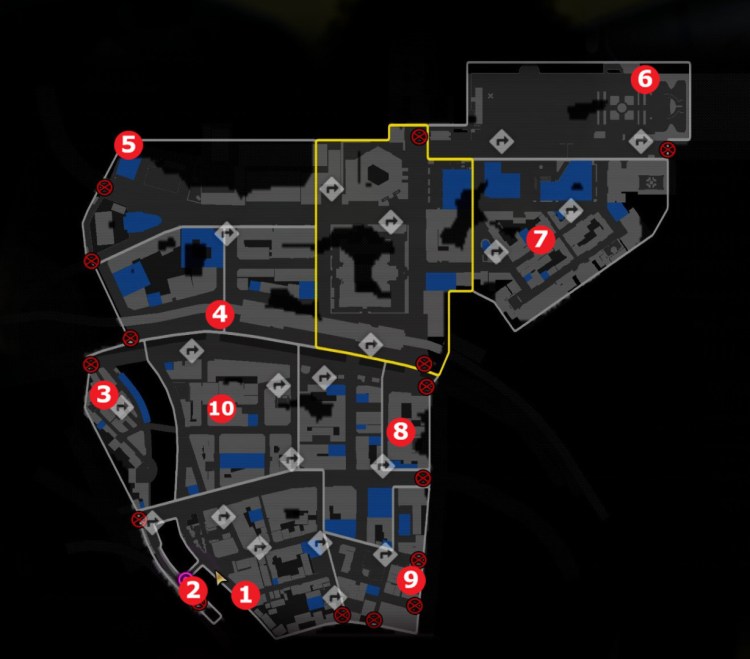 Do note that you need to have Part-Time Hero app before you can successfully snap photos of them (by pressing up on the d-pad to switch to camera mode). Also, the Kappa has to have a “Take Picture” icon on it when you take the pic or else it won’t count. You’ll know you’ve done it right if Ichi comments after the photo is taken.

Number 1: Commercial District, near Can Quest

This is the very first Kappa statue you’re likely to find, not least because there’s a child standing next to it who’ll tell you that there’s good luck in store for anyone who finds all 10. (And that he likes its butt.) This one is due south of the Can Quest minigame marker, next to the river, and about as far south down South Sakura River Street as you can walk. 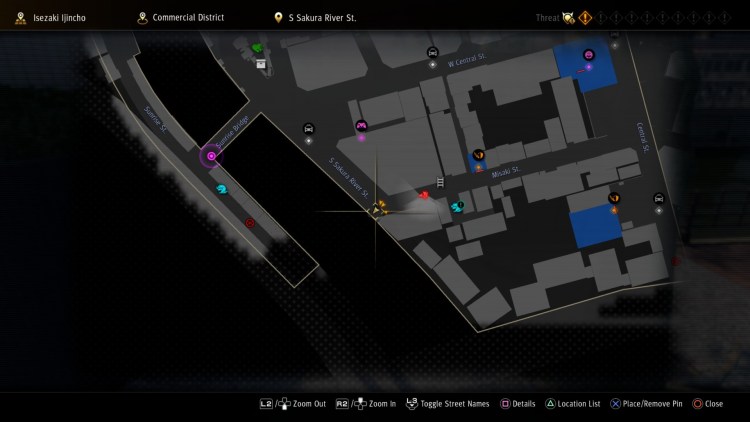 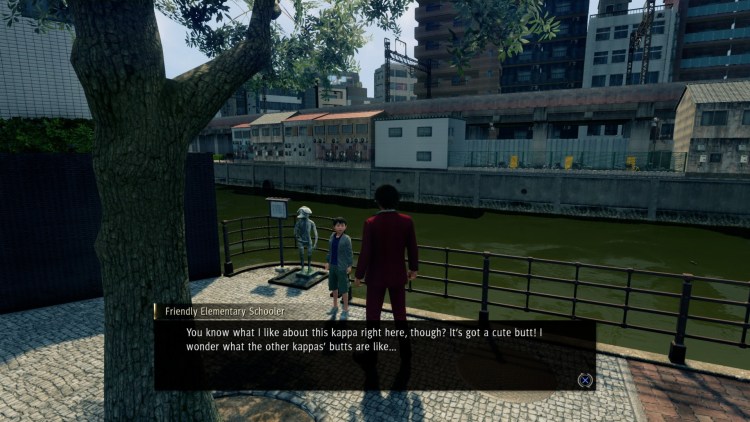 The second Kappa is just across the river from the first. Assuming you’re starting from the previous one, head north, go across the bridge, and then head south past Ichiban’s lodgings. Just past the person you can report Part-Time Hero completions to is a Kappa statue peering out of a window on the side of the street nearest the river. The window just to the right of Ichi, in this screenshot.

We’re now getting into “Oh, that’s kind of a dick move” territory. It gets worse, don’t worry. The Survive Bar is a regular hangout for Ichi and the gang, found in the Bar District. No map here because, honestly, you’ll be there a lot anyway. If you really need directions, it’s the building with planters outside it just west of the taxi in the Bar District.

What you need to do is go upstairs, when you possibly didn’t even realize there was an upstairs. From the entrance, the stairs are directly to your left past the counter. Head on up and through the door, and you’ll hopefully see a Kappa statue taking a nap in the open closet. Not creepy at all, and I really don’t want to know where the bartender got this thing from. 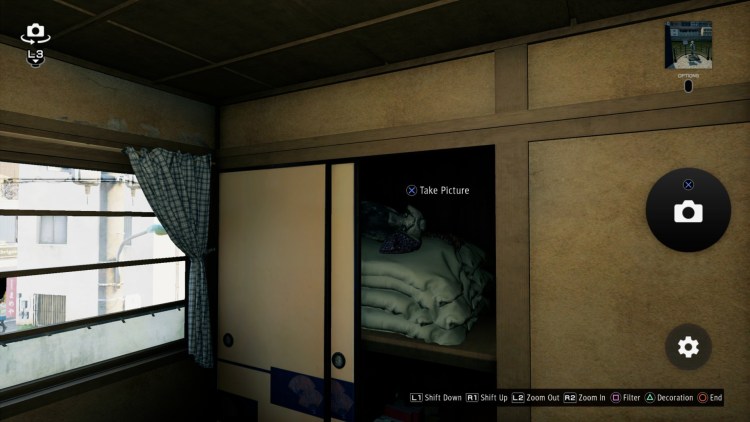 I said it got worse, didn’t I? This one’s in what I think is a sort of elevator near West Jinnai Station. From the Residential District taxi on Yokohama Boulevard, head east a tiny distance until you can go north towards Jinnai Station. Do exactly that: head north. Cross the road and look east, and you should see a glass box that I’m pretty sure is an elevator. Inside this is the fourth Kappa statue.

I’m fairly certain you need to be standing on the road right next to the elevator for this picture to count, and this is an area with fairly high road traffic, so try not to get hit by a car while taking this pic. I’ve added an extra screen here to show where it is, because seriously, this one is awful. 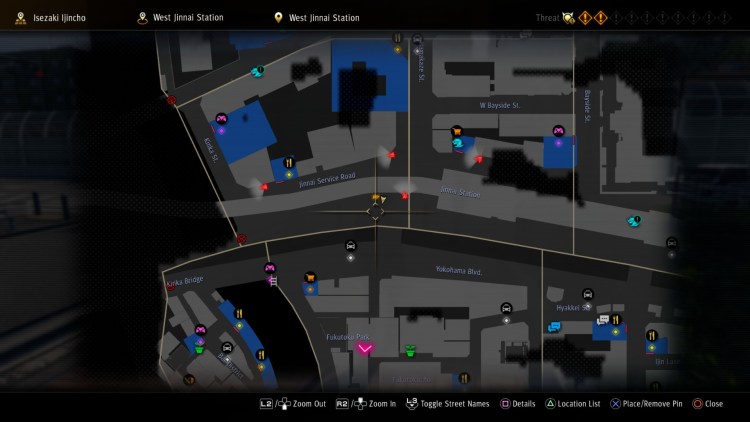 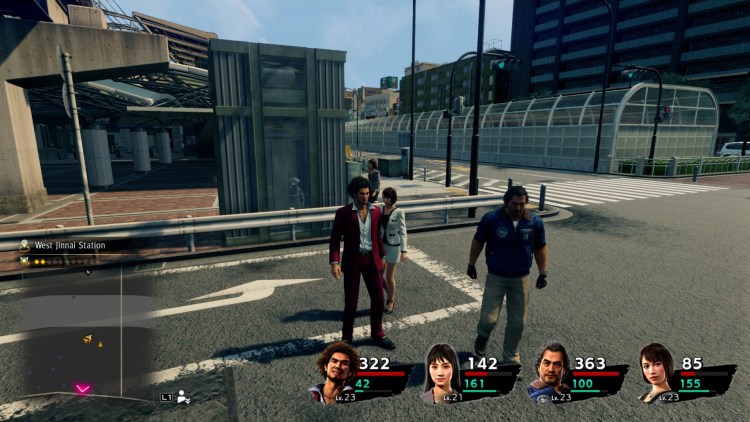 After those two, the fifth Kappa is a welcome bit of relief. This one is behind the batting center in the northwest of Yokohama. In fact, it’s pretty much at the exact furthest northwest point you can reach on the map. Not much to say here: it’s really easy to spot as long as you wander behind the batting center, where you can also find a silver safe and a gold safe for your troubles. 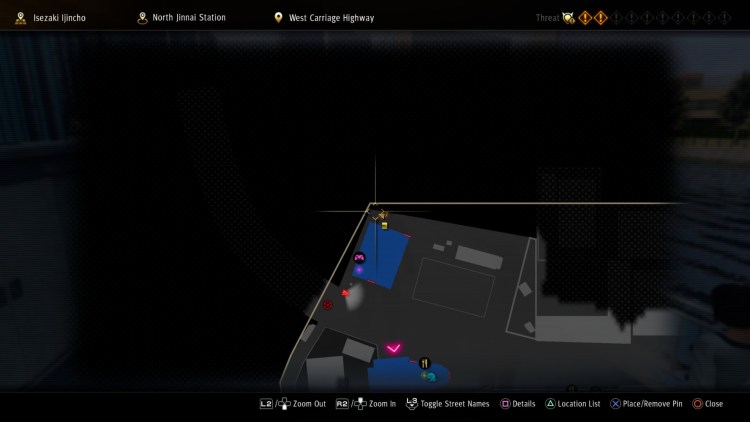 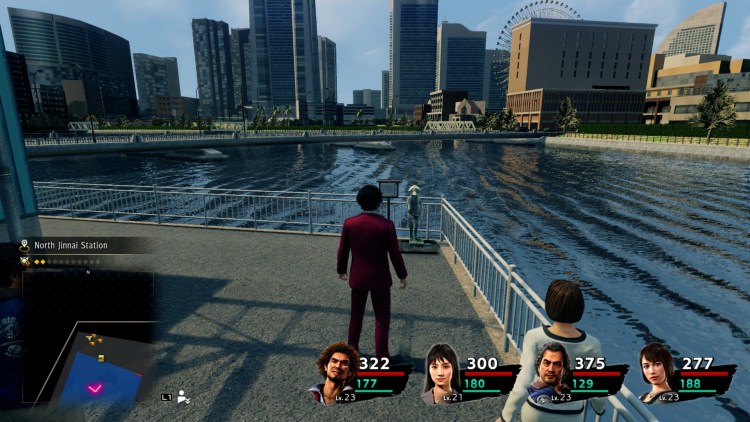 Depending on whether you check out every single shop or not, this one’s either going to be really simple to find or yet another that’s in “oh come on” territory. Basically, it’s inside the northeast-most shop on the map. It’s a food truck called Hero’s Harvest, so you don’t even need to go inside; if you can see the proprietor, you can see the statue. It’s just to the right as you look at the owner. 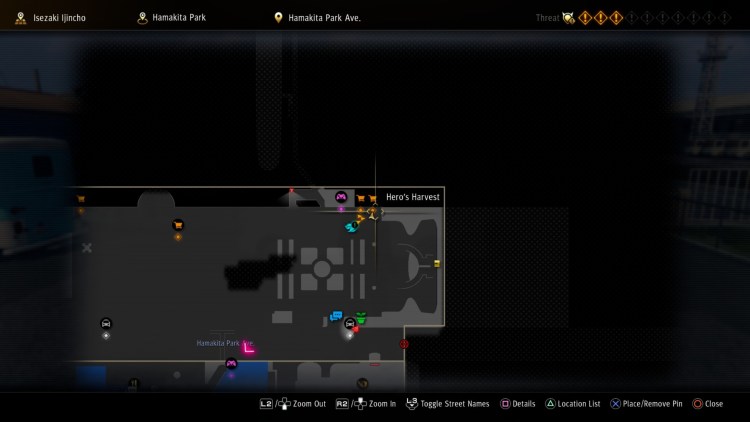 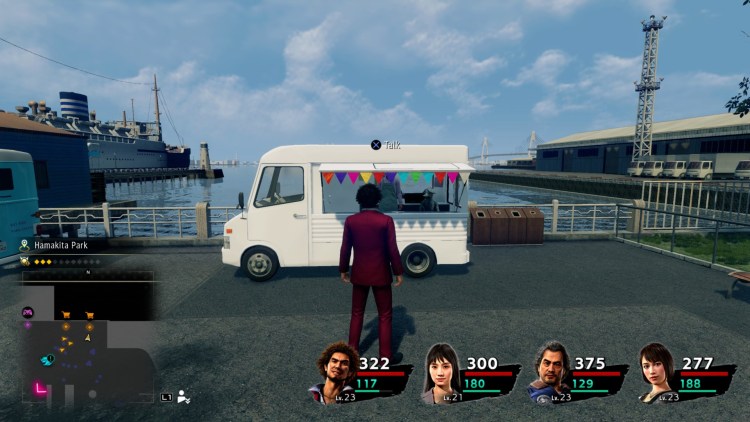 Okay, this Kappa is mean. Thankfully, it’s also easy to describe. In the Chinatown area, there’s a crossroads. Due west of those crossroads is a shop called Yi Xing Tang. If you look at your map, that’s got one building bordering it on the east, and then there’s a tiny gap between that and the next building. The little corner there? That’s where this Kappa statue lurks. On the map here, it’s basically a few steps northwest of where Ichiban is standing. 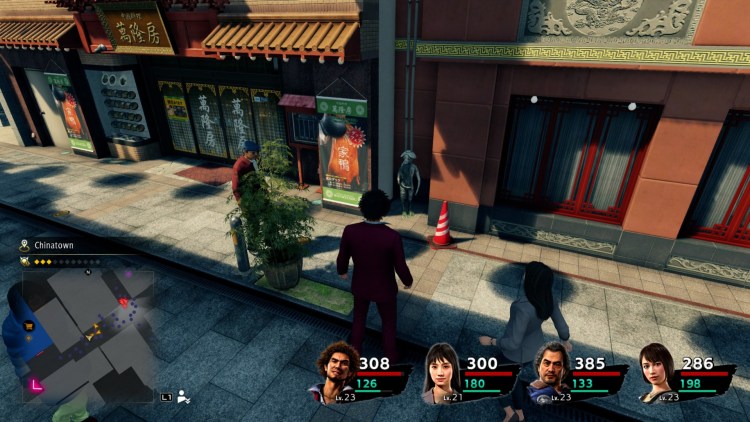 I’m pretty sure you need to be a ways into chapter 6 to get a pic of this Kappa statue, so bear that in mind. First, head to Zhou Long Distribution on the map. It’s just north of the movie theater, or if you prefer, the taxi on Restaurant Row. Just north of Zhou Long Distribution is a little alleyway leading east. Just where the blue border of the shop ends in this alley, there’s a set of stairs going upwards which are not marked on the map: you’ll proceed up these at one point in chapter 6. Again, there’s another screenshot here to clarify exactly where that is.

These stairs go up and to the left. After they take you to the left, keep going in that direction past the tables until you reach a dead end. The Kappa statue is on a raised area just above you, looking down at you, laughing.

I hate these things. 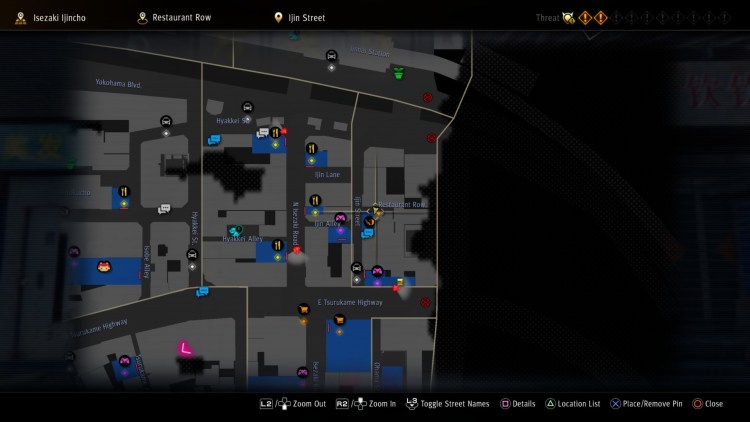 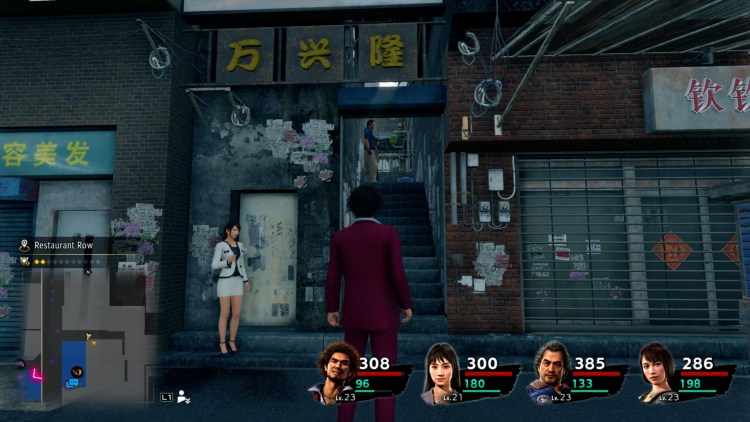 These are the stairs you need to climb. They’re right at the border of the shop marker for Zhou Long Distribution. 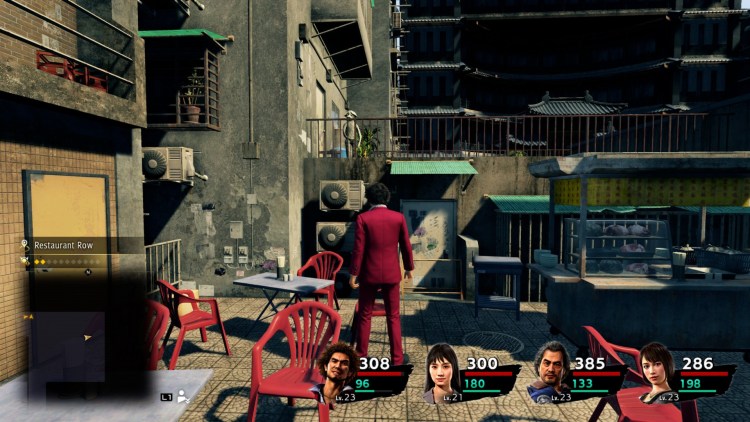 And there it is, gazing down on Ichiban from above.

Only two more Kappa statues to go, and then you can put this part of Yakuza: Like a Dragon behind you. This next one is also kind of a dick to find, but not nearly as bad as some. For this, you want to go to Love Magic, the sex shop weapons shop in the Red Light District. Northeast of there is a little alley that runs north to south, with a wider area in the middle of it. On the north end of that wider area, face east and look through the fence, and you’ll see the ninth Kappa grinning at you. Watching. Waiting. Lurking. 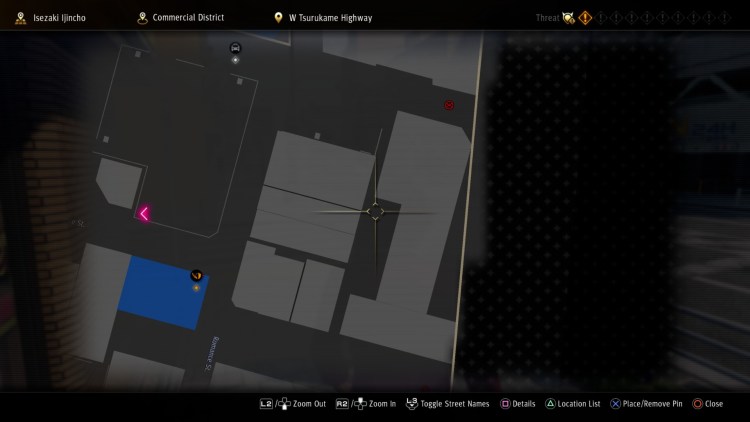 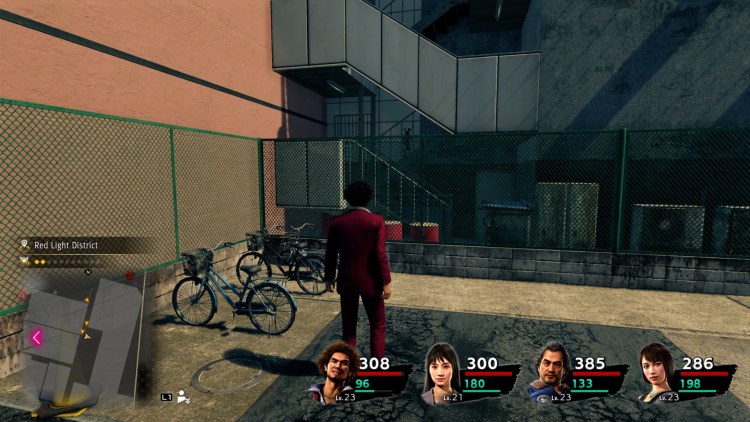 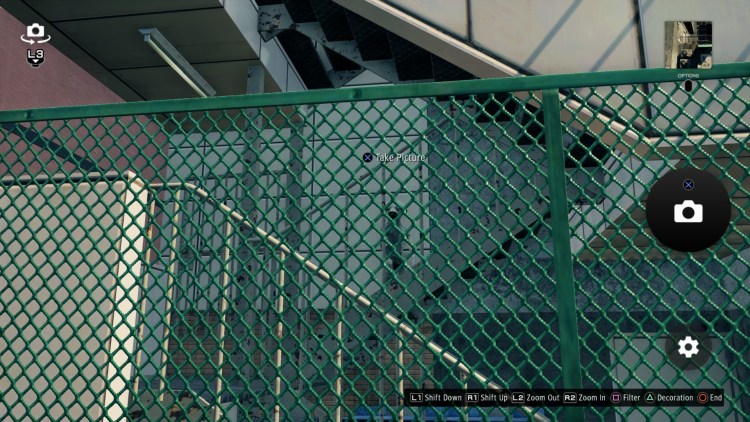 The tenth and final Kappa requires you to have made your way through most of chapter 7. Up until this point, there’s an area in Koreatown you’re constantly turned away from, and that’s precisely where this Kappa is. Without spoilers: after doing the part of the story that requires you to go in there, you can go back into this area.

So. Go into the area marked on this map (behind the building marked as Fukutokucho) and head up the stairs there. In case you’ve forgotten or are much further in, these are the stairs where you started that particular part of the story. At the top of the stairs, look at the building across the road and you’ll see the final Kappa statue in the corner. 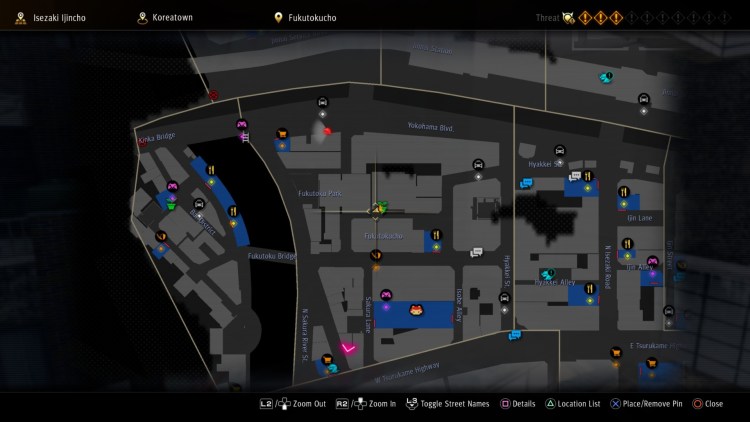 Just to the right of Ichi’s head.

And that’s it, you’re done. That’s all 10 Kappa statues for the Kappture the Kappas Part-Time Hero quest. You can now go and turn it in at whichever Part-Time Hero report person you choose, and net yourself 2 million yen plus a few extra little bonuses.

Hopefully, this guide to the Kappa statues helped (and equally hopefully, the maps and screenshots meant you didn’t have to figure out what I was going on about) because trying to find all of these things made my brain dribble out of my nose.