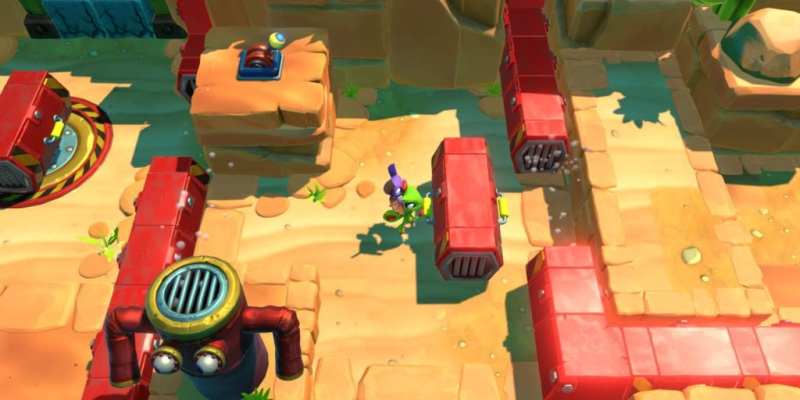 When the original Yooka-Laylee released, the reaction was divisive. While I thought it was a good game, many were disappointed by the fact that it adhered so closely to the games it was meant to imitate. Many were even more disappointed that it didn’t reach the same heights that its progenitors did. Yooka-Laylee and the Impossible Lair similarly wears its influences on its sleeve. But does it offer something new, or will the people who were annoyed the last time around find the same things to complain about?

While the last game did its best to offer an experience similar to Banjo-Kazooie, Yooka-Laylee and the Impossible Lair draws more inspiration from Rareware’s other famous platforming series, Donkey Kong Country. Thankfully, though, they don’t remotely attempt to copy those games here. While there are similarities, this game is very much its own thing. And it’s an entertaining, well-designed platformer in its own right.

Bee on your best beehavior

Yooka-Laylee and the Impossible Lair could have just gone with what’s typical of the genre. But instead, it turns those conventions on their ear. The game’s introductory stage is technically the opening of the Impossible Lair itself. Yooka is given a bee shield that protects him from a bunch of hits. You get to play this as far into the eponymous level as you can, but when you inevitably take your last hit, you’re kicked to the world map. 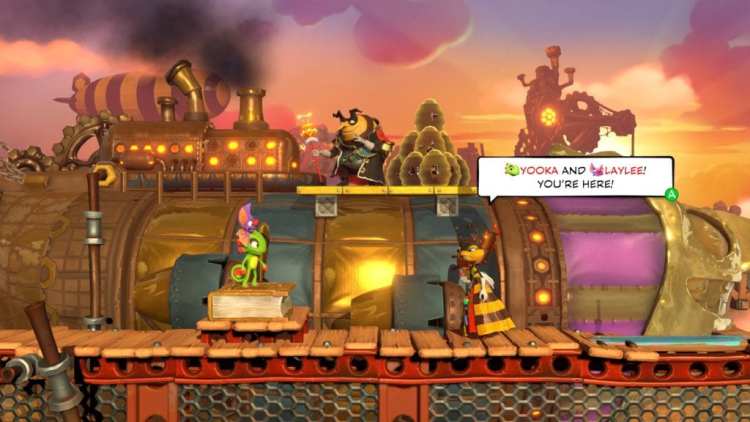 The villain from the first game, Capital B, has used his hive control beam on all of Queen Phoebee’s bees, and it’s up to Yooka and Laylee to get them back. The game is divided between the world map, where you move around in 3D from a top-down perspective, the game’s 20 levels, which have two versions each, and the Impossible Lair itself. The game has a unique focus too. Every time you beat a level, you rescue a bee. Each bee allows you to take a single extra hit in the Lair. 40 of these come from the levels themselves, while the last 8 are obtained through finding secret exits in a handful of the levels.

Yooka-Laylee and the Impossible Lair is a very different game than its predecessor, as you can probably tell by now. But it does keep one of that game’s most notable features. Just like the last time, additional versions of each level can be unlocked that change them considerably. This varies from freezing the level, flooding it, covering it with honey, or even blanketing it in smog. Most of the time, these changes make the levels feel completely different, making it more like having 40 levels than 20.

The majority of time spent in Yooka-Laylee and the Impossible Lair is in the standard 2D platformer levels. These levels task you with simply making it to the end and smashing the crystal hive that the captured bees are imprisoned in. Each level also has 5 T.W.I.T. coins to obtain, which you’ll need to unlock additional areas in the overworld. But more on that in a bit. The elements that make up these levels will be familiar to anyone. You jump on or roll into enemies, hop from platform to platform, climb vines, jump over sawblades, and hunt for secrets. 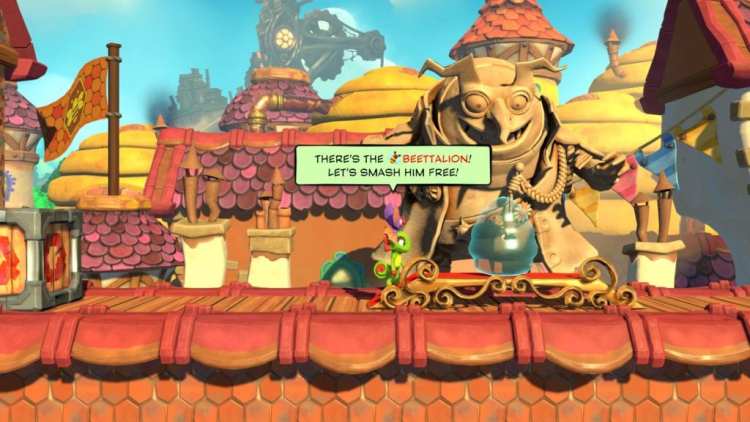 The level design is very strong here. Levels are big and colorful and have a solid level of challenge. Yooka’s moveset is sort of a combination of the last game with Donkey Kong Country. Much like that, his most important ability is his forward roll, which allows you to attack, go under obstacles, and extend the reach of platforms. The really unique inclusion here is the fact that, if Yooka rolls on the edge of a platform, he’ll continue to roll for the full duration of the animation. This allows you to basically jump in mid-air. This is a really neat feature that I’m very fond of. It keeps the homage intact but expands on it in a way that very clearly differentiates it from DKC‘s roll.

Just like those games, you can have both Yooka and Laylee together. Laylee grants Yooka an extra hit; when you receive damage, she flies around Yooka for a few seconds before leaving the screen. You’ll want to catch her before she flies off to regain that extra protection. You can also bring her back by ringing certain bells found throughout the levels. Having Laylee on his back lets Yooka do a spin in the air that gives him some extra air-time, which is very handy. Curiously, Laylee can’t flap her wings here. But her sonar attack does return if you equip a tonic found in the overworld.

As good as the side-scrolling levels are in Yooka-Laylee and the Impossible Lair, I think the overworld is even better. Here, you’ll explore a very tightly-designed 3D world that’s packed with puzzles and secrets. Trowzer, the humorously-named snake merchant from the first game, returns here to erect (I’m so sorry) paywalls that require you to spend coins to pass. There are power-ups called tonics hidden away throughout the overworld as well. You can find these by solving puzzles or by following clues given to you by talking signs. 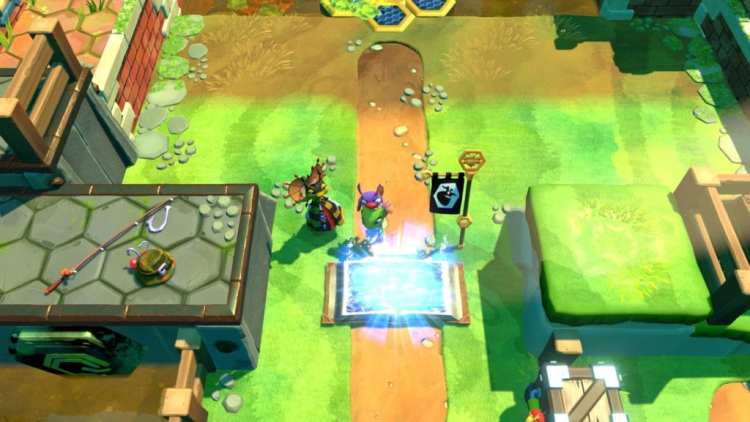 Many of the overworld puzzles have to do with unlocking the second version of the game’s levels. For instance, you can throw fire and ice fruit at certain things and affect the area. If a level book is sitting in the water and the water freezes, then the level freezes as well. You can bring up to three tonics into each level too. Helpful ones decrease the amount of the game’s currency, quills, that you collect, while ones that make the game harder give you more quills. I didn’t use tonics, as I wanted to experience the default level of challenge the game has on offer.

For the most part, Yooka-Laylee and the Impossible Lair isn’t a hard game overall, but it is a challenging one. The levels have a lot of checkpoints and there’s no lives system, so you can try as many times as you want. The game will even give you the option to skip difficult sections if you’re having too much trouble. Sections can occasionally get pretty tough, too.

The levels are mostly just based around typical platforming, but there are a few that change this up, albeit to the game’s detriment. My least favorite level in the game was the barrel level, where some barrels were arranged confusingly, which made it difficult to know how exactly you were supposed to perform to be successful. But the worst was in the game’s lone auto-scroll stage, where I got hit and died no matter how I jumped due to extremely poor enemy placement. After dying to this repeatedly, however, the game simply moved me to the next checkpoint without asking me. The latter section was infuriating and I’m glad it was an exception to the game’s strong level design. However, the Impossible Lair itself is also somewhat problematic. It’s tough as nails and features more strong design, but it doesn’t gel all that well with the rest of the game. It’s weird that a game that gives you the option to skip difficult sections would require you to play through four levels and four boss battles in one go. I assumed that beating every level would unlock something that made this easier, but it’s exactly what it claims to be. If you run out of bees to take hits for you and die, you have to start the entire thing over from the beginning.

The levels themselves aren’t enormously difficult, mind you. But you’ll need to spend a significant amount of time practicing them to make it through while taking the least amount of damage possible. I didn’t mind this at first, but when I started making it to the third stage and had to replay the first two for the umpteenth time, I began to get a little cranky. It’s really something that Playtonic put such a steep challenge in the game, but I didn’t enjoy replaying the same sections ad nauseam.

Yooka-Laylee and the Impossible Lair is a very good game. The controls are solid, the level design is enjoyable, and the exploration and puzzle-solving in the overworld is a treat. The visuals are also rather lovely as well. They’re cartoony, yet detailed, with busy backgrounds and amusing character models. I can’t imagine this game getting the same kind of reception that its predecessor did. 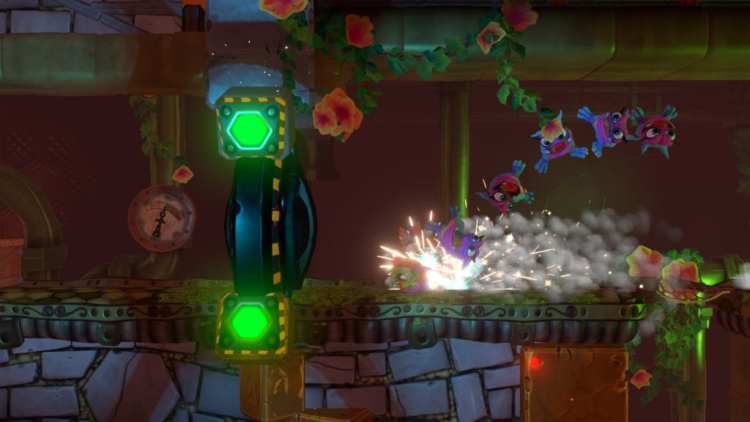 That being said, I’m not sure the game knows who it’s for. The majority of it seems to be designed with accessibility in mind, but the final challenge doesn’t work with that at all. I just can’t imagine that the same people who are longing to memorize and pull off perfect runs through a gauntlet will be satisfied with most of the game’s levels. And the people who enjoy those will possibly be massively put off by the Lair. Regardless of how well these two things mix, though, Yooka-Laylee and the Impossible Lair demonstrates that Playtonic definitely has more of that classic magic up its sleeve.

Yooka-Laylee and the Impossible Lair

Yooka-Laylee and the Impossible Lair is a really strong platformer with good level design and excellent visuals. Certain aspects of the game don't mix well together, but it's a good time overall.

Destiny 2: Shadowkeep review – Not quite Forsaken