God dammit. I was hoping to take a break for a little while, de-stress, and generally calm down after Peter going AWOL and then E3 happening. And then Zero Escape: Zero Time Dilemma suddenly gets released on PC. Not only did I not know it was coming to PC (because I’m stupid), but I didn’t know it was out this soon (because I’m stupid). So… here we are.

Alright, this is the last one for now.

Zero Escape is a series that’s hard to pin down, if only because it’s migrated from system to system. I think I played the original game on the DS, and then the sequel on the Vita, and now I’m playing the third (this one) on the PC. For the record, I cannot tell you whether or not this game will make any sense if you haven’t played its predecessors. The series’ story arc is ludicrously in-depth, and the first few hours offer up a fair few spoilers from the past two titles, but you can probably get behind the basic idea and themes pretty quickly. 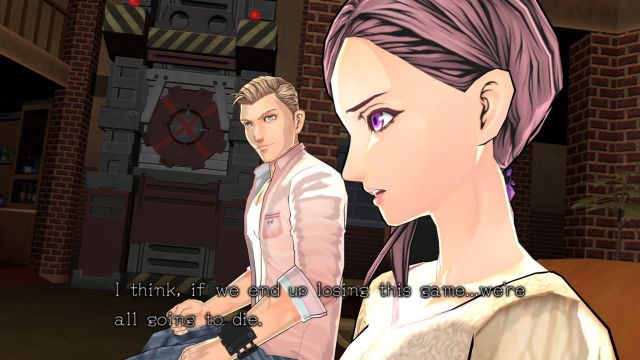 Akane makes a transition to 3D.

The basic idea and themes are that a bunch of people are trapped in a location by a masked individual named Zero, who forces them to play games to escape, and who is likely one of the people within the game. In this case, they’re trapped in a bomb shelter 50 metres underground, and the only way to escape is to input a code into the elevator. Zero will reveal the code one piece at a time as people die. Six deaths, and the others can escape. It’s a visual novel, but one with a lot of focus on replaying different paths and taking what you learn on each path to help you out on others. There are also brain-stretching sections resembling point-and-click adventure segments.

We’ll get to discussing all of that in a bit. First, the PC port.

Here are your options, both in Launcher and In-Game form: 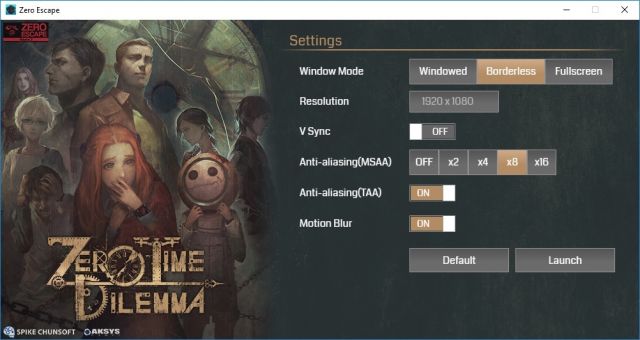 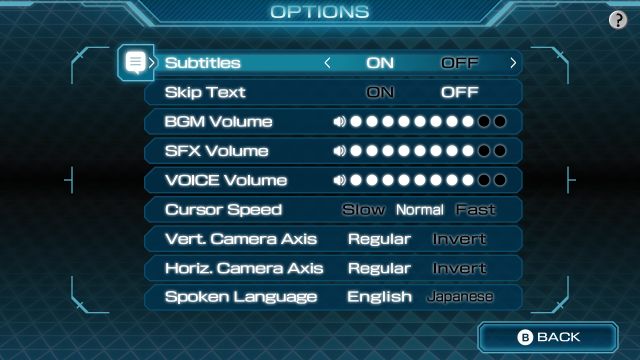 Nothing too out-of-the-ordinary in either. The highest resolution is 1920×1080; although it does have support for aspect ratios like 1680×1050, it doesn’t look like it supports super widescreen or anything. Which, y’know, probably shouldn’t be much of a surprise. Not too many tweakables, either, but it’s nice to have motion blur and AA options, if nothing else.

The in-game options aren’t much more interesting, although there is full dual-language support, which is rather nice. I don’t mind the English voice acting so far, but hey, the Japanese is there if you fancy it. Cursor speed shouldn’t impact you any unless you’re using a gamepad, and the rest are pretty self-explanatory.

The only downside, if anything, is Skip Text. Normally you can only skip scenes you’ve already seen (if you’re replaying to make a different choice, say) but turning that on lets you skip bits of any scene. Unfortunately, it’s not a one-line skip, instead leaping past two or three at a time. This might be my mouse screwing up and clicking two or three times in a row, but I think it’s just skipping to the line that happens after whatever animations are scripted. You can always dip into the log to see which lines you’ve missed, but it’s hardly a perfect solution, particularly for those of us who read fast and want to move on when we finish reading a line. 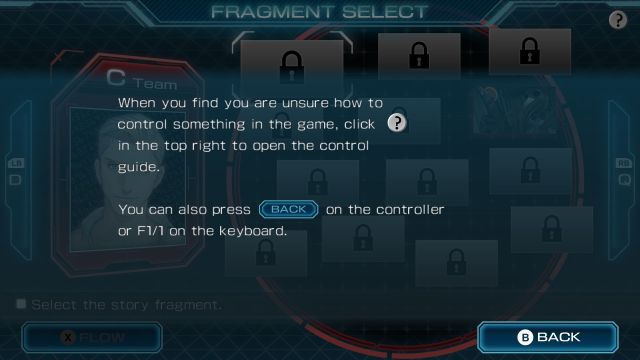 All in-game prompts are gamepad buttons, but if you’re really stumped on which mouse button to click or where to click it, the F1 key/question mark button will help you out.

Control-wise, it seems fine. All in-game prompts are gamepad focused, but there’s full mouse/keyboard support, and as a visual novel/point-and-click adventure hybrid, the mouse is pretty self-explanatory. The in-game help functions also offer up the keyboard hotkeys, but so far I’ve strictly used the mouse. Clicking on stuff to examine it or use it, or clicking and dragging to rotate the camera, all works just fine.

I can’t really fault the PC implementation of the graphics, either. It’s got a cel-shaded-meets-anime style, and I haven’t seen any obvious problems. Some of the environmental and object textures are a little low res, but it generally all fits the stylised look. Nothing yet seems horribly out of place.

That’s not to say it’s without fault – a lot of the animations are incredibly stiff, and it has a habit of cutting away rather than actually showing complex animations (like a character handing something to another character), but I don’t think this game really had the highest budget in the world and it could have easily taken the typical visual novel way out and used still frames, so I’m not going to fault it too much for that. 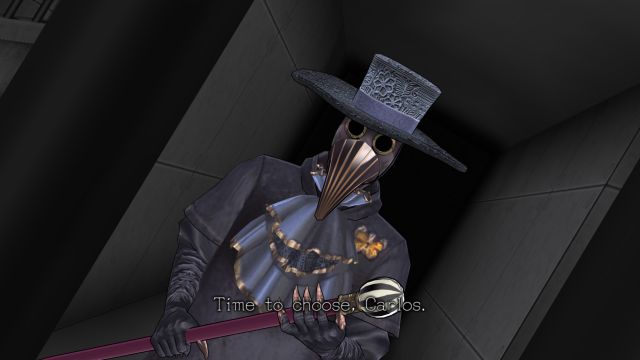 Also, Zero is dressed up as a plague doctor, which instantly makes me like better predisposed to the game.

Basically, as long as it runs and controls fine, I don’t give a shit because guys it’s Zero Escape on PC. As such, if you’re after something that looks amazing and has breathtakingly fluid animations and cutscenes, er, you might want to go elsewhere.

As this is actually newly released rather than a port of a year-old game, I can’t say too much about Zero Time Dilemma because I haven’t actually played that much. This time around you’ve got three protagonists, though, each of which are appointed as the “leader” of a team in a different section of the facility.

As a brief rundown of some of the events I’ve been through: after an opening section, each of the teams are asked to cast a vote on which of the other teams should all be executed. Whichever team receives two votes dies. The teams found a way to communicate and opted to split the votes, so that each team would only receive one vote, and everyone would live. And then I accidentally clicked the wrong button and sentenced Team C to death, because the votes are actually up to me. 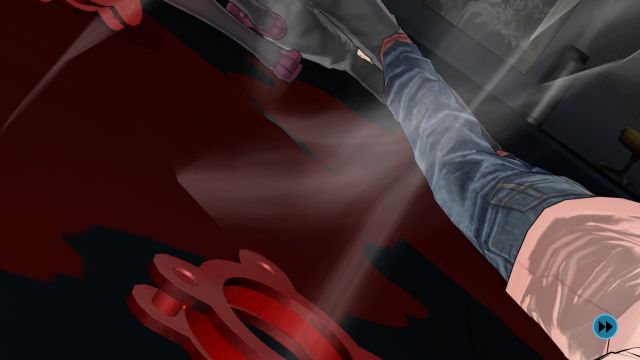 Of course, I can go back and try that decision differently if I want to. It should be able to branch off in four different directions depending on which team (if any) gets the required votes, and doing so will likely be essential to getting the game’s true ending. In any case, after a scene showing their execution, I unlocked a whole bunch of new scenes to take a look at (which seem to be in scattered order, and I suspect part of the gameplay will be piecing together the timeline)… at least one of which was set hours after the execution, but had me taking control of the same team as they tried to solve a puzzle to escape from a locked room. Confusing? Yep, but I suspect it’ll all make sense later.

The puzzles make up the other part of it, with ludicrous obstacles barring the way. I stopped playing partway through this puzzle so I don’t know how it’ll shake out, but so far I’ve powered up a heating/cooling device and I seem to have to make a little gelatin man for some reason, but the water needed for this is in a code-locked cupboard. How will that help me escape? No idea, but it’s a nice injection of gameplay into the weighty choice-based visual novel stuff. It’s like some of The Crystal Maze‘s absurd puzzles, only without Richard O’Brien cackling and playing a harmonica. 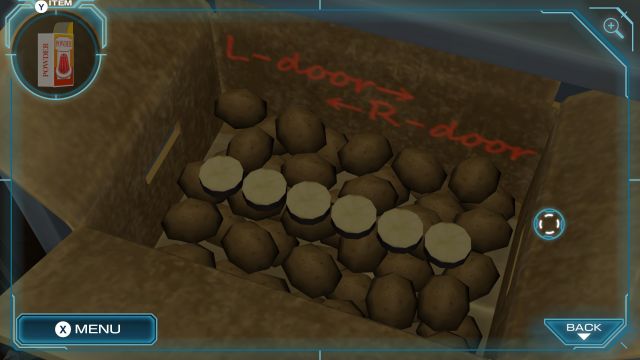 Okay, so, there are six potato slices, and the left door is to the right, and… uh…

Short version: it runs fine on my PC, based on 90 minutes of play. It looks okay at best, it’s got noticeably rough animations, and I wish the text skip option worked differently… but if it has anywhere near the story quality of its predecessors then I don’t give a shit.

If you have any intention of playing the other two games then I’d strongly suggest you do so before playing this, considering that four of the characters return from those titles and subtle spoilers abound in the opening hour. If not, then I’m not convinced the full overarching plot will make total sense, but you might be able to get on board. I’d have to finish it to say for sure, though.