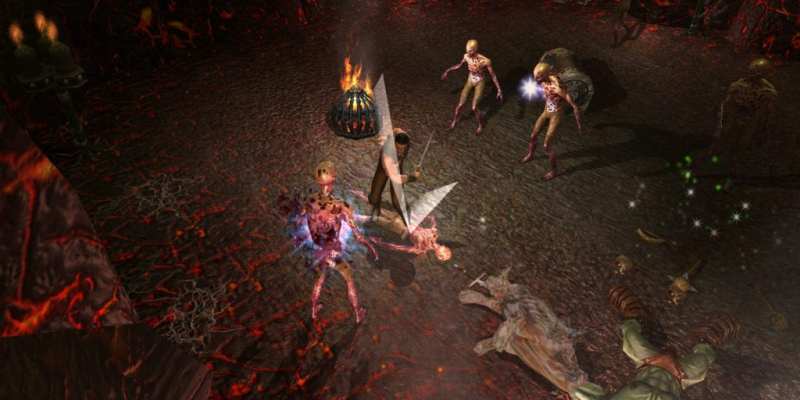 I made a terrible mistake. You see, on spotting the name “Zombasite” in my inbox, my mind immediately sprang to those dreadful browser strategy games where you’re a human or a zombie and you have 10 actions a day or whatever. Can you blame me? Its name is a portmanteau of “zombie” and “website.”

Except it’s not. It’s a portmanteau of “zombie” and “parasite”, and rather than being a dreadful browser strategy game, Zombasite is Soldak Entertainment’s latest quirky take on the ARPG genre.

Soldak is the studio responsible for Depths of Peril, Din’s Curse, and Drox Operative. All of them are ARPGs – but all of them play with the typical ARPG conceits in an unusual way. Drox Operative, for instance, put you in a starship and had you do quests for (and manipulate) a variety of factions around the galaxy. Basically, ARPGs with a living world rather than rote linearity.

I thought I’d start off with some official shots, simply because most of the ones I took were from 1024×768 windowed and they don’t exactly show the game at its best.

If you’ve played any of them, Zombasite will feel pretty natural. The zombie apocalypse has just taken place in a fantasy world, and you’re in charge of one of the few surviving clans. You ARPG your way around the place – clicking on enemies, picking up loot, levelling up – but you’re also trying to grow your clan, keep it safe, and deal with rival clans.

To my mind, this is the particularly tasty meat of the game.

Zombasite is more like a 4X game than an ARPG in terms of its victory conditions. Whenever you start up in a region the world is randomly generated, but your victory conditions remain the same: ally with all other clans (and have them ally with each other), destroy all other clans, gather a frankly ludicrous amount of food to ensure your clan’s survival, or beat all of the non-optional quests in the region.

Taking a few people from your clan along to help is a good idea, but they can die, and they tend to get a bit unhappy if they’re injured. Not quite XCOM levels of “I can’t believe this person died” but it can, nonetheless, hurt.

Each of these deserves a bit of explanation. First: yes, relationships with other clans are important. If you’re on good terms with them – because of trading, or completing quests for them, or generally assisting them – you can help each other out. If you’re on bad terms with them, then everything from subterfuge to full-on raids are possible.

Then there’s your clan, which also needs to be carefully watched. Barring the fact that every member of your clan needs food, each individual also has their own likes and dislikes. On my very first game, the two clan members I started with hated each other. I’d get five feet into the wilderness before hearing that one had started a fight with the other, simply because their personalities didn’t mesh… and this isn’t the sort of thing you want happening during a zombie apocalypse.

Clan members are full-fledged NPCs, too. They have morale. They need food. They can be sent out scavenging. They can come with you into the wilderness; they can level up and be given your old armour and weapons. They also tend to result in quests, as should someone in your clan be infected by some sort of disease or plague, you’re almost certainly going to be asked to find a cure before it spreads. And if it does spread… well, you’d better hope you’ve been doing a good job of keeping the other clans happy and the zombie threat meter down, because that would just be a terrible time for you to come under attack.

I don’t know why you need Female Animated Corpse brains to restore a house and I really, really don’t want to.

Quests themselves are largely emergent. A lot of them boil down to “kill this miniboss” or “collect 15 dog scrotums” but plenty of them rise from situations rather than from any sort of plot mandate. You need those 15 dog scrotums to cure the Plague of Hideousness afflicting your clan, and if you don’t get them, then there will be consequences. Perhaps it’ll make your clan members more miserable and hungry. And, while we’re at it, that Plague of Hideousness only hit your clan because you pissed off a rival clan and they deliberately infected you with it.

In short, if you get a quest that’s marked as high priority and you don’t attend to it, bad things are going to happen.

So you solve quests, gather food, beat up monsters, level up, find loot, deal with clan relations (both internal and external) and then, eventually, win. Or lose. And then you start again on another randomly generated map, keeping your character, clan, and – if you so desire – region stuff, like clan relationships, and a recurring arch-nemesis. And, along the way, you’ll be continually learning new lore about the Zombasite itself.

Every clan member has a full character sheet and personality. Just hope your starting two villagers aren’t a Death Knight and someone who hates Death Knights.

Zombasite has been in Early Access for awhile at this point, and it shows: the basic mechanics are all there, and most of the recent patches have been addressing niggling issues or adding new events. Honestly, it could probably launch right now and be rather well received, particularly by anyone hungry for more games in the traditional Soldak style.

That’s not to say I don’t have complaints or issues, mind you. Being from a fairly small indie studio, it’s not going to win awards for graphics and much of the presentation can best be described as “serviceable.” Bits of the UI are a little clunky. Inventory management, while never requiring you to play Inventory Tetris, can be a drawn-out affair, and the same goes for salvaging materials or divvying out your old gear to the rest of your clan. But none of this should surprise anyone who, say, played Drox Operative.

Slightly more of a problem is the character development, but that’s more down to my personal style. I like big flashy upgrades that feel like they massively change my character, but Zombasite (with the rogue-y/assassin-y class I played, at least) is more about the number crunching. This passive makes me a lot more accurate, while this one means my weapons inflict a bit of poison damage. Still, perhaps the more wizardly types will have flashier upgrades due to spellcasting. Nonetheless, if you like to pore over numbers and maybe min-max your stats, I don’t think you’ll have any issue with this.

Building a class of your own offers up a whole lot of choices.

It’s also worth noting that the class system is really, really in-depth. Every class has three skill trees available (although “trees” is a bit of a misnomer, as there aren’t really any pre-requisites for skills), although you can also build a Hybrid class, picking two trees from any class. The amount of min-maxing this should support makes my inner munchkin drool.

Nonetheless, it’s the emergence, the diplomacy, and the clan management that’s really making Zombasite feel like something special. And despite the little complaints I’ve mentioned I really am enjoying it; I haven’t played nearly as much as I’d like to, but I keep wanting to fire it up for 20 minutes, just to gain another level, or dish out some equipment to my clan, or raid those buggers who’ve been causing me issues…

Zombasite isn’t likely to attract the crowd who want ultra-polished, super-pretty games – but those of you who appreciate a bit of quirkiness, some clever twists on the genre tradition, a living world, and stats? (Or, frankly, who’ve ever enjoyed a Soldak game.) Yeah, you might want to take a closer look at this.

Blizzard Reveals All Whispers of the Old Gods Hearthstone Cards