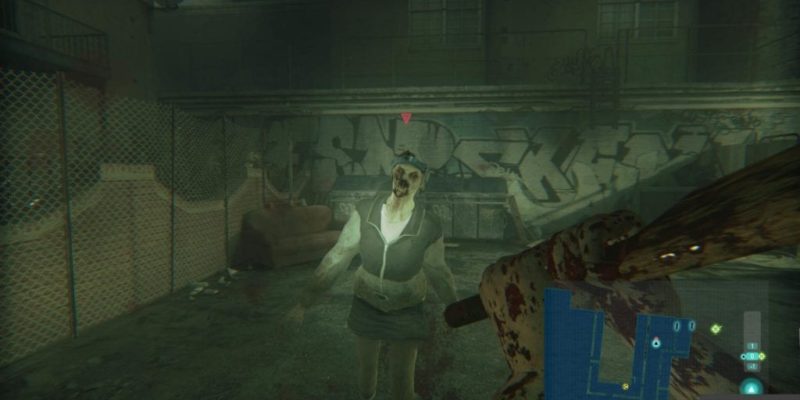 Interesting fact: this is not actually the first Ubisoft game called Zombi. And no, I’m not talking about the fact that this is a PC version of the Wii U title ZombiU. I’m talking about a 1986 point-and-click adventure from a first-person perspective called Zombi, and – being set in a shopping mall – it was basically a thinly-veiled game version of Dawn of the Dead. A movie which was known, in Italy, as Zombi!

Well, okay, I thought it was interesting. 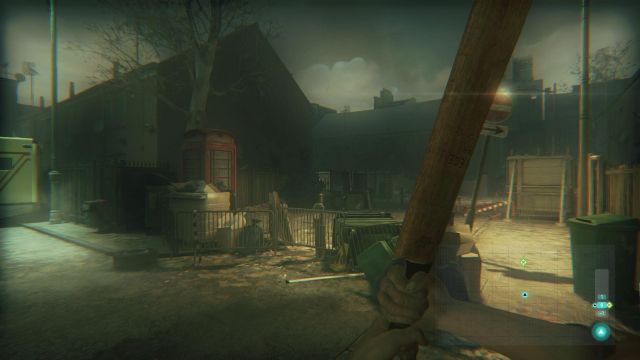 This Zombi is not a first-person point-and-click adventure. It’s a game in which London has been overrun with zombies, and the player character fights for survival with weapons, guile, and a number of high-tech gadgets. The twist is that death really is death; upon being overrun by the zombie horde, you then become another survivor of the apocalypse, whose first task is to find and eliminate your (now zombified) previous character, so that you can get their stuff.

It was a high-profile title for the Wii U, and considering it used the Wii U’s gamepad and touchscreen to interact with the environment, mess around with your inventory, and check out a map of the surroundings, a port to other systems seemed unlikely.

So, yeah, I was mildly surprised when Ubisoft announced that ZombiU was coming to other platforms, with both the “U” part of its name and all of the second-screen trappings dropped. I was slightly more surprised when it was actually released one month after this announcement. Now I’ve spent 25 minutes playing it, and I’m about ready to tell you how the PC version holds up. 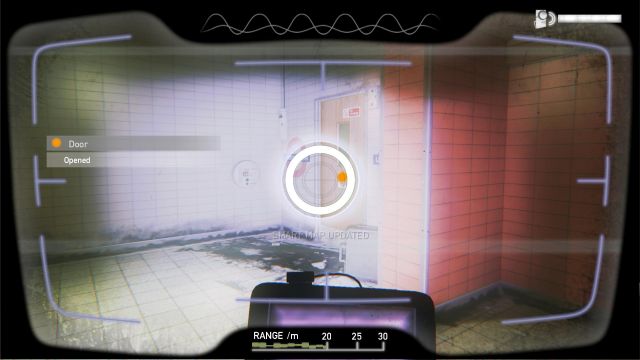 The scanner – a neat little thing that shows you if there’s anything worth interacting with in the vicinity – is now brought up by holding C.

First things first: it’s around a 20GB download, which seems pretty bloody big for a game that was about 6GB on the Wii U. I suppose it’s got all sorts of high-res textures and so on, though, so maybe it makes sense! Maybe.

Second things second: I’m running this, as ever, on an i7-3820 with 16GB RAM and a 2GB GTX 670. That said, I don’t think you’ll have too much of a problem running this on most machines, for reasons that will become clear shortly. 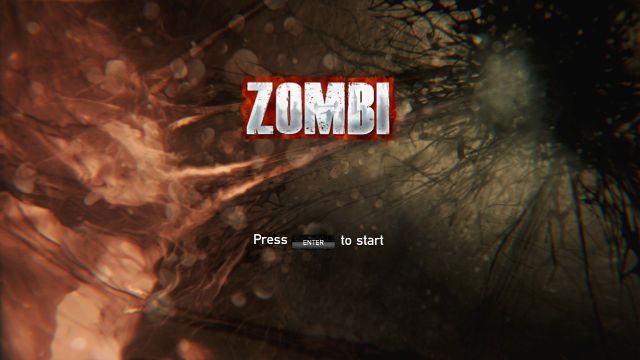 The game started up in wondrous 1280×720-o-vision, although that was easily remedied with a quick jaunt to the options menu and a game restart. The highest resolution I can choose in the options is 1920×1080, but I don’t know if that’s the highest resolution the game supports, or if it just won’t let me pick one higher than I can manage. Sorry. I’d suggest being a bit wary if you really want to try running this in ultra-widescreen or something, though.

Resolution aside, the options are about as barren as the game’s depiction of a zombified London. Here’s your basic menu: 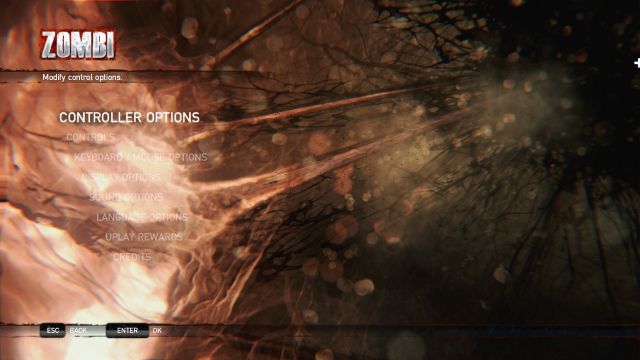 And here are the “Display” options: 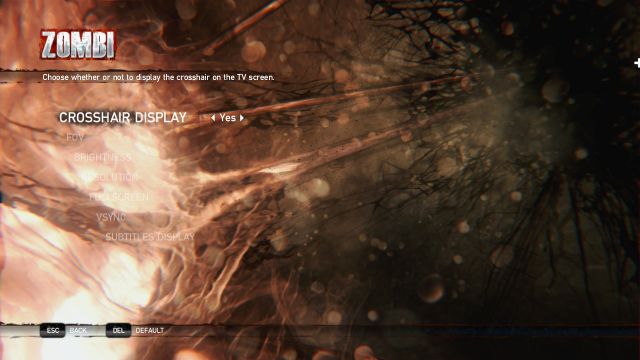 Yeah, that’s… fuck all, quite frankly, assuming you can see the white text options with that background. In terms of adjusting the way the game looks, you’ve basically got Vsync (on/off), Resolution (a must), and FOV (which can be set between -10% and 10%, although that means sod all to me). Absolutely nothing else. Depressing.

On the plus side, the controls appear to be pretty much completely remappable, and you can choose from a mix of languages for both menus/subtitles and voices. On the downside, are you seriously telling me that we only have a resolution option? No high-res texture toggles, or AA, or anything? And while I’m happy to see an FOV option, I do wish I could set it a little higher. I’ll show you some examples a bit later. 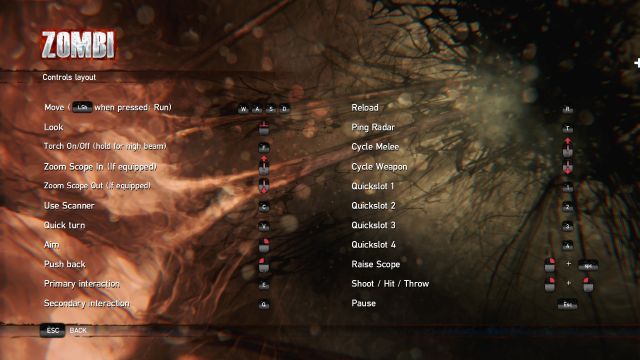 Oh, and according to FRAPS, the menus are running at around 250FPS. So… that’s quite something.

Let’s start playing, shall we? 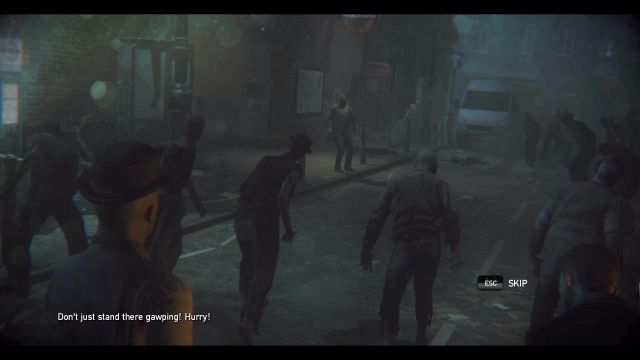 The game kicks off with our (initial) hero, an estimator called Thomas Patel (which may or may not be randomised), standing around staring at the zombie horde and completely ignoring the voice on the loudspeakers yelling at him to take cover in the nearby Underground station. We’re shunted into gameplay, and have to make our way through the linear corridors of the Underground until we find ourselves in a safehouse. Basic, simple tutorial stuff, although a little more exciting than “here is a door, this is how you open it.” 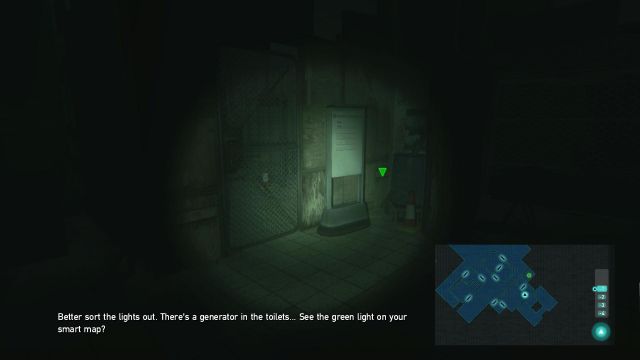 As we’re presumably safe in the safehouse, let’s take a moment to talk about how awful the game looks. I don’t think I’m exaggerating when I say that this looks about 10 years old. Possibly worse, in fact; Half-Life 2 is 10 years old, for fuck’s sake. Gaze in wonder at this shot of me pointing a gun at a zombie I brutalised: 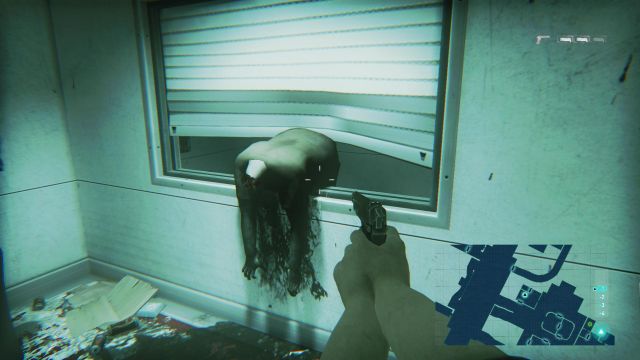 Or maybe this pic of me threatening a zombie in true Shaun of the Dead fashion:

Here’s me doing a QTE: 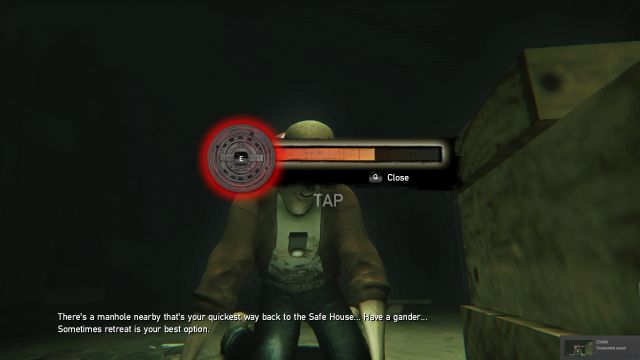 I mentioned the FOV up above, too, so let’s have a look at that. Here’s the game with the FOV set to the minimum of -10% FOV: 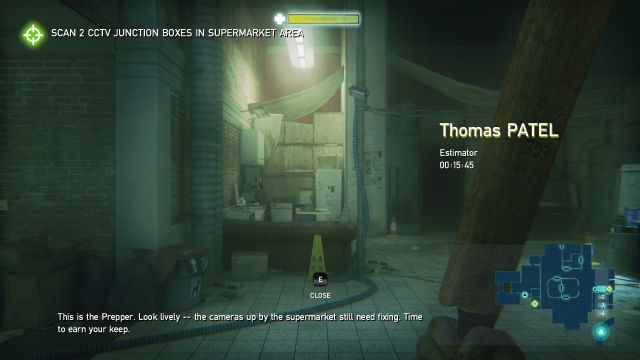 And here’s the game set to the maximum of 10% FOV: 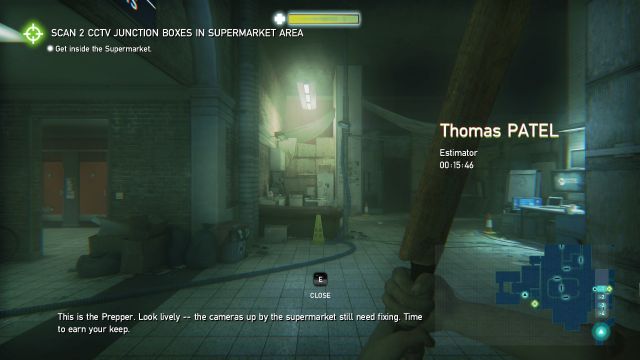 It frequently looks shit, basically. The environmental textures are a mish-mash between “quite sharp, actually” and “blurry mess”, and the character textures are very rough and ready. Everything looks grainy and washed out (it seems to be going for a sort of “film” look) which may actually be for the best – while it makes everything look a bit blergh, if it wasn’t like this, it might actually draw more attention to the quality of the textures. Some of it’s not too bad (I actually quite like the safehouse shot above, for instance), but some of it… erk.

Happily, Zombi isn’t locked to 30FPS. In fact, it doesn’t seem to be locked to any FPS: FRAPS claimed it was running at about 140FPS during gameplay. It certainly seemed silky-smooth, and I didn’t notice any framerate drops, but if it looked like this and still chugged along I’d be genuinely horrified.

It controls nicely on mouse and keyboard, too. There are a few oddities if you’ve played a first-person game on PC before – there’s no crouch or jump so things like mantling over or crawling under obstacles are done via the context-sensitive Use key, and you have to “ready” melee weapons by holding down the right-mouse button before launching your cricket bat assault – but it seems to play just fine. No multiplayer in this version, but as it was apparently local-only stuff that used the Wii U Gamepad, that’s maybe not a surprise. All fine, really. 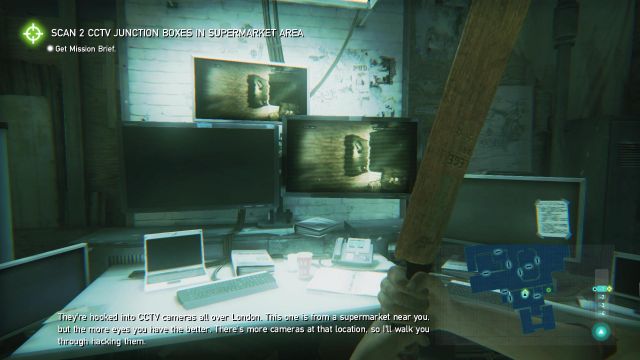 No, not that sort of second-screen.

The problem is that, for once, the graphics actually might detract from the gameplay. I love my old games, and retro games, and games that use limited graphics to great effect, but Zombi isn’t really any of those. It’s a survival horror game with (theoretically) shiny 3D graphics, and as an avowed coward, I’m a little sad to say that I didn’t feel any edge or tension or fear when playing. Granted, I’m still going through the early tutorial stuff so the game hasn’t presented any challenge, and maybe the tension will arrive when I’m running for my (sole) life from baying hordes of zombies.

But right now… no. Enemies don’t look scary. There’s no sense of impact when clubbing something over the head. I feel entirely disconnected from the events on screen which means there’s very little atmosphere so far, and for a game that’s meant to evoke some sort of horror and trepidation, that’s a Very Bad Thing. 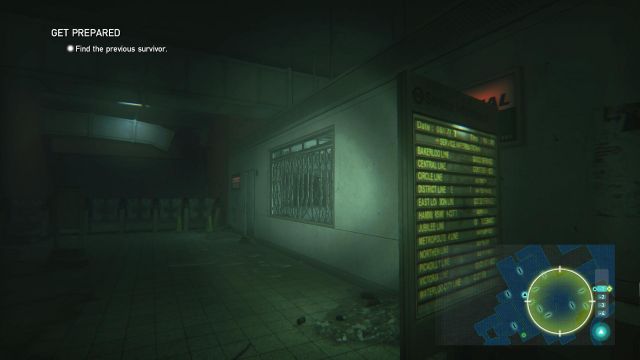 Okay, so it manages to capture the atmosphere it was after once or twice in the first 25 minutes.

The upshot is that Zombi seems to be a perfectly acceptable PC port in terms of controls and framerate, and that’s probably the main thing; praise is also due for successfully converting a game that heavily used a touchscreen onto a single-screen system. But, with that said, the graphics and the PC-specific options are utterly appalling. It looks fine in the dimly-lit areas where you only have your flashlight for company, but whenever there’s any light around it’s wince-inducing, and it really does detract from the gloomy atmosphere the game is trying to create.

I don’t know; I feel like I’m being a bit too hard on it. The game itself might be good – I’m making no judgments about that, because I haven’t played it for nearly long enough, and there are doubtless a load of Wii U reviews around that’ll help you decide if this is your sort of thing. The pricing is hardly offensive, either; £15 seems pretty reasonable for a delayed PC version of a major title, and it might well be worth a punt if you’re interested in the idea. As I said, it controls and runs just fine, and if you’re interested in the game itself that’s probably the most important part. Personally speaking, I’m intrigued enough by the game’s basic mechanics and idea that I want to play more, but I really hope some atmosphere turns up sometime soon.

By Steven Wong4 days ago
Interviews

By Steven Wong7 days ago
Previews