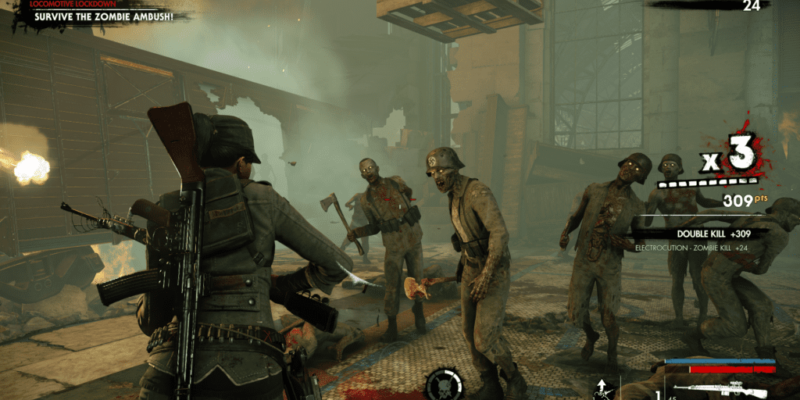 Remember a decade ago when zombie games were really cool? Back then, we had the likes of Left 4 Dead, Dead Rising, and Call of Duty‘s ever-popular “Nazi Zombies” mode. Zombies were absolutely huge in popular culture, but the allure has died down substantially since. Rebellion Development’s Zombie Army series is one of the last remaining relics of that era, and the Sniper Elite spin-off is looking to breathe new life into this decrepit genre with Zombie Army 4: Dead War.

In this preview, I’ll only touch on Zombie Army 4‘s first two single-player missions, “Dead Ahead” and “Death Canal”, as well as the “Horde” mode. At launch, the game will have multiplayer and 9 additional campaign missions, so consider this more of a “first impressions” than anything else. 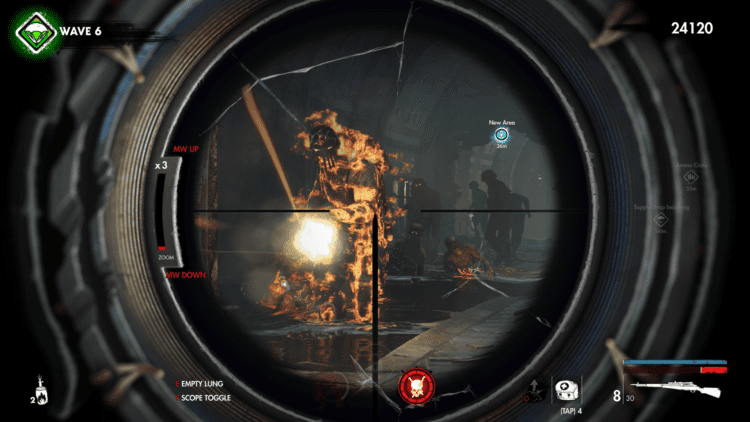 Gameplay can become quite difficult when bosses arrive

Zombie Army 4‘s campaign follows your group of survivors as they travel throughout different European cities in search of a safe area to hunker down from the Nazi Zombie attack. The game’s first two-story missions — “Dead Ahead” and “Death Canal” — take place in Milan and Venice, respectively. Each of these provides excellent zombie-killing environments. Missions consist of three stages separated by a variety of “safe houses”, much in the same vein as Left 4 Dead. While Zombie Army 4‘s missions might not be as memorable as those in Valve’s creation, they aren’t bad at all — Venice especially.

Death Canal drops players into the city’s famous narrow waterways on a dingy watercraft, constantly needing to stop for fuel or engine failure. There’s a real sense of urgency as players collect fuel canisters or open gates on the mainland, as more and more zombies approach by the second. Also, there may or may not be radioactive ghost snipers shooting at you throughout. It’s pretty bonkers. 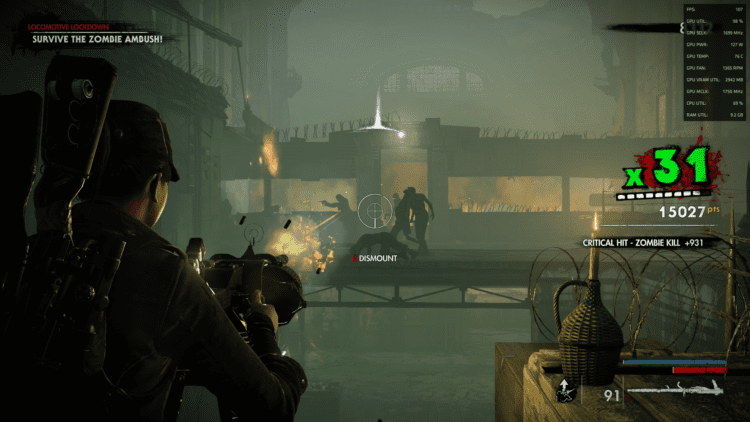 Some of the most fun sections of Zombie Army 4’s campaign are the on-rails shooting galleries.

Oh, and did you think you think Hitler was dead when you sealed him with the Sagamartha Relic in the last game? Think again. Zombie Hitler is back in all his glory, alongside flamethrower-armed giants and machine gun-wielding Wehrmacht. As you can probably tell, Zombie Army 4 doesn’t take itself too seriously. There’s an intentional absurdity to its chaos that perfectly fits with this genre.

I only wish that the characters shared this sentiment. I chose to play as Jun in my playthrough, and although there are five other characters to choose from (two hidden behind microtransactions), none of them provided enough personality or character to be memorable. As a result, it often feels like the narrative of Zombie Army 4 takes itself way too seriously. It makes story missions feel awkward and forced when compared to the rest of the game. 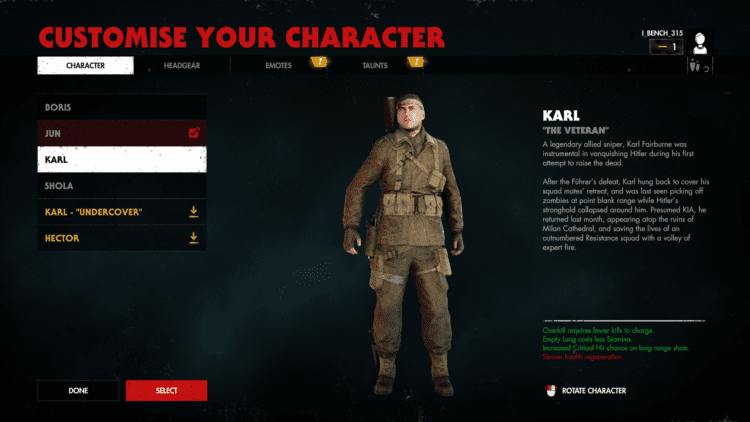 It’s unfortunate that some of the playable characters are already locked behind a paywall.

Narrative aside, there is a fairly robust loadout customization system in place for use before each mission. Not only can you fashion your character with Fortnite-esque dances and emotes, but you can personalize weapons as well. You can customize weapon skins, attachments, upgrades, charms. There’s even a wide array of in-game perks to choose from, which can vastly differentiate the way you approach certain situations. My personal favorite is the “Second Chance” perk, Zombie Army‘s take on Modern Warfare 2‘s classic “last stand.” More perk slots become available as you level up, as do more powerful guns and attachments.

When life gives you zombies…

…you add a wave-based survival mode. Zombie Army 4‘s “Horde” mode takes the formula of its campaign and morphs it into something a bit more arcade-y. Here, waves of increasingly difficult zombies will berate players as they rack up their kill multiplier. You also have to scavenge for resources throughout the cramped tunnels of the subway.

I can’t speak to how Horde mode plays out cooperatively, but as a single-player experience, it’s shockingly similar to newer Call of Duty Zombies maps — particularly Black Ops 4‘s Voyage of Despair. That isn’t a bad thing at all. Smaller bosses will periodically be thrown at you, from the dynamite-clad “Suicider” to the aptly named “Armored Giant.” Each of these has a particular weak point. That means gameplay has a tad bit more depth than simply “aim at the head,” which is nice. After all, you’ll already be doing that a lot. 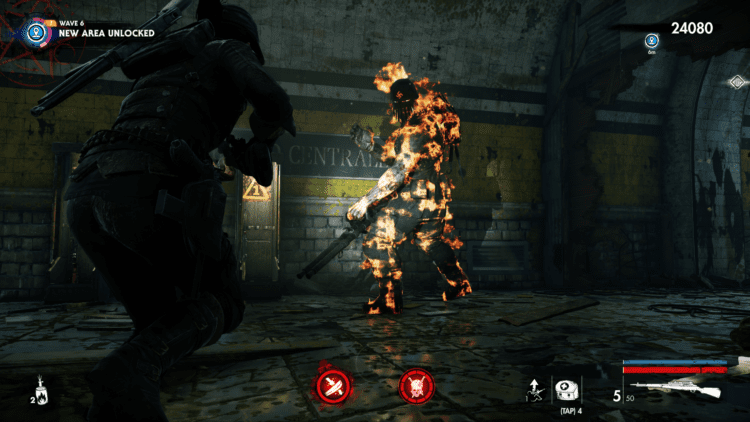 One of the many bosses in Horde Mode

Imagine the most memorable and intense moments from Left 4 Dead 2 — your team low on ammo, backed up against a wall, a swarm of zeds inching toward you. Or the intensity of that final push as you weave through the crowd to revive your allies by the skin of your teeth. That’s how my first Horde-mode playthrough felt. Sure, the map feels a bit uninspired, and I could imagine the gameplay loop stagnating after a few go-arounds. But there is enough customization to keep things fresh, and the gunplay is satisfying enough to keep you coming back at least a few times for that classic zombie survival rush.

I expect the addition of new maps (and of other players) will enhance the experience even further. Already, from what I’ve seen, Horde mode is one of the shining moments of Zombie Army 4.

Keep on running (even on low-end hardware)

Zombie Army 4 is the first 2020 release I’ve played, but you probably couldn’t tell by looking at the game. The dark color palette does wonders to hide some of the muddier textures and the surprisingly devoid-of-detail zombies, yes. But unnatural facial animations and poor lip-syncing by the main characters feel much more last-generation than I’d have hoped. That said, I was surprised by how well the game performed even prior to release. You should be able to blast through crowds of undead even on lower-end hardware. 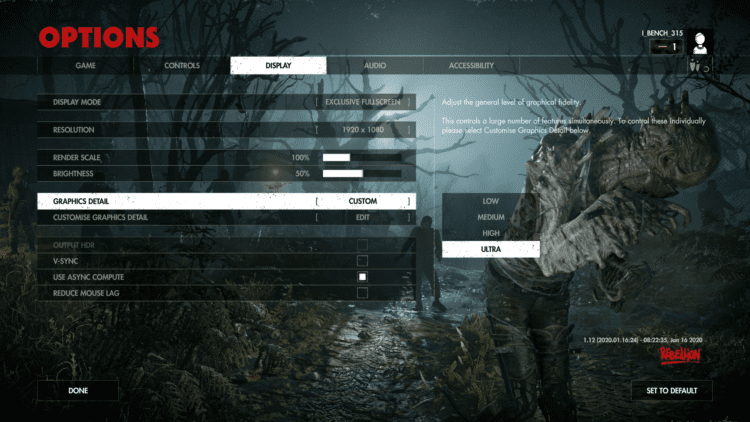 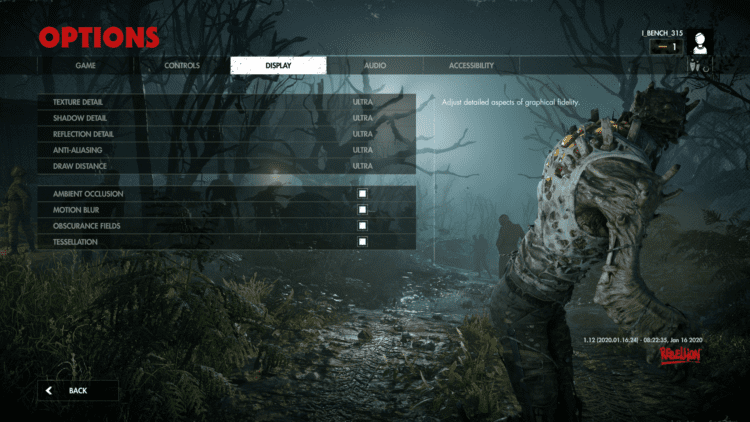 Zombie Army 4 is a solid game in a lot of ways. It’s practically devoid of bugs or glitches, the visuals are good (if underwhelming), and gunplay is satisfying — particularly when the camera follows a sniper bullet in slow-motion as it busts open the remnants of a zombie’s brain. There’s a lot about Zombie Army 4 that I really like.

Even though certain aspects of Zombie Army 4 feel ripped from older zombie titles, there’s nothing quite like that quick dopamine hit of surviving a wave of Zeds or reaching a new safe house. It’s simple, fun, mindless, arcade action to share with your friends. Even if it only slightly fills the void that Left 4 Dead has left behind, I really am excited to see what the rest of the game brings.

Stay tuned for our official review of Zombie Army 4 when it releases via the Epic Games Store on February 4.

Contest: Feel the music with a copy of hip-hop JRPG Orangeblood

Contest: Win Tropico 6 and its new DLC, The Llama of Wall Street

By Steve Clist20 hours ago
Features

By A.K Rahming21 hours ago
Features