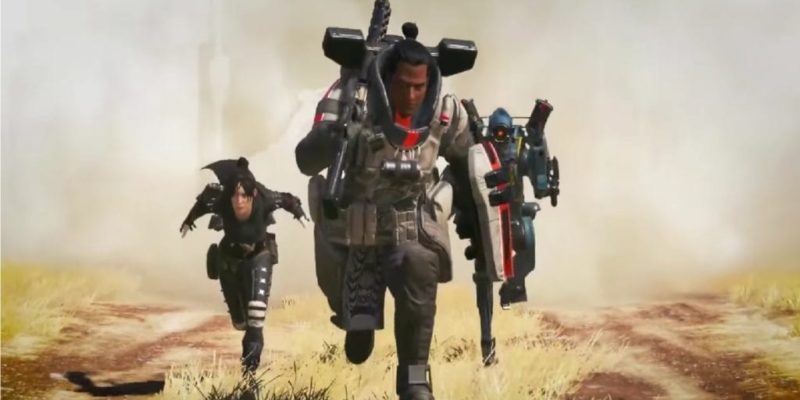 A surprising newcomer has entered the battle royale field. Apex Legends, from the makers of Titanfall, is now available to download and play. Given that the online frag-fest just launched today, there are bound to be some issues. However, I’m happy to report that the game actually runs decently with surprisingly stable framerates and performance. First, let’s take a look at the system requirements from Apex Legends’ official website:

I was already well above the recommended specs which meant the game should look fine for the most part. Before you check out the graphics settings, don’t forget to update your graphics card driver. For instance, Nvidia recently released an update that adds GeForce Experience support for Apex Legends. 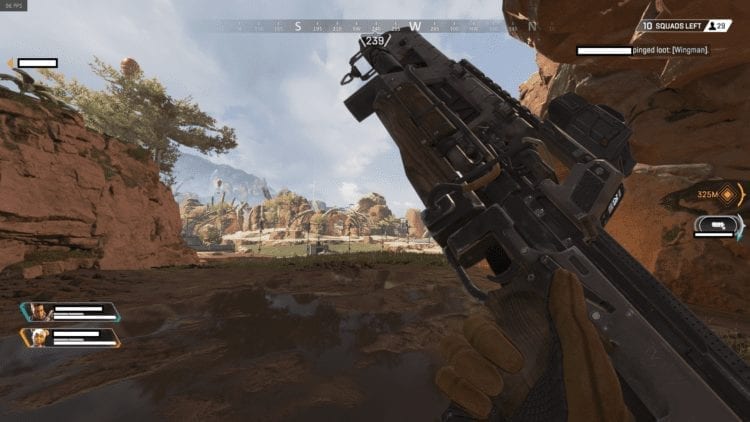 The visuals are actually quite decent. Not as spectacular as Battlefield V, but it doesn’t need to be. It’s not too demanding on your hardware.

Apex Legends features a number of different settings for you to tweak, getting that right balance of performance and quality. I know I’m limiting myself to using my regular living room TV (64-inch, 1080p display) but, cést la vie. You can change your display mode, aspect ratio, and field of view (FOV). I’ve also disabled V-Sync which was fine since I wasn’t experiencing any screen tearing. If you are, then you might want to enable it or limit your framerates (75 FPS should do for a vast majority of games).

Additional settings you can tweak include anti-aliasing, texture filtering, ambient occlusion, and various changes to shadow quality. If you’re having trouble with performance, you can always lower AA, ambient occlusion, and everything related to shadows to try to squeeze out as much as possible from your machine. Essentially, though, you shouldn’t run into any issues if you have a mid-tier rig that’s well within the recommended specs.

Lastly, you can configure your graphics settings even during a match. It’s perfect for checking out if performance has improved in a real-time situation. 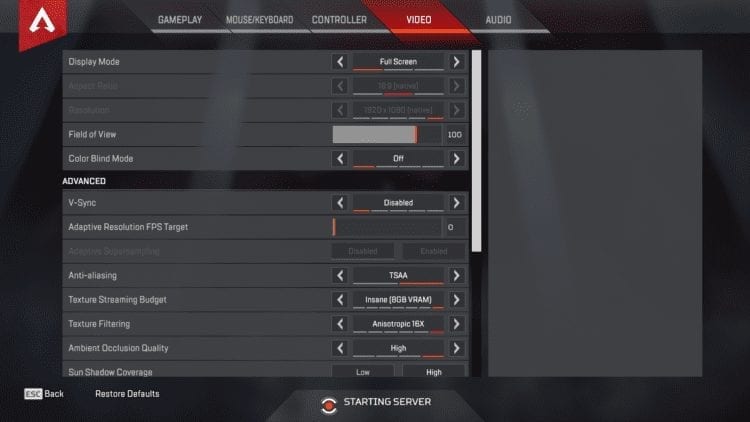 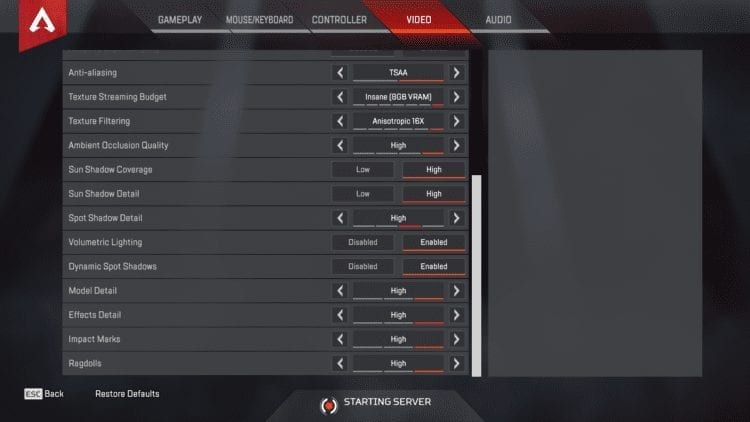 As a competitive battle royale FPS, graphics are not necessarily something you’d want to focus on. Your top priority would be your framerates since this can mean the difference between success or death. Still, playing a game that looks abysmal wouldn’t keep you entertained now, would it?

With V-Sync disabled and with all settings set to maximum/enabled, I was averaging around 80-100 FPS in most areas. This includes getting into wild firefights against enemy squads. I can also reach 120+ FPS for a few seconds depending on the location, although this would drop once spectacular visual effects and the rendering for open areas come into play. For instance, when the map loads and everyone’s parachuting, I’d get 60 FPS.

Again, this is based on the PC setup I have. If I do scale everything to their lowest settings, I’d be getting 140+ FPS without any drops at all. The downside, of course, is that the game looks like it released in 2005.

In any case, I’ve included some graphics comparisons. These are all from the training area. Feel free to click each image for a larger view. Also, take note of the EA Origin FPS counter on the upper left side of the screen.

The starting area of training mode: 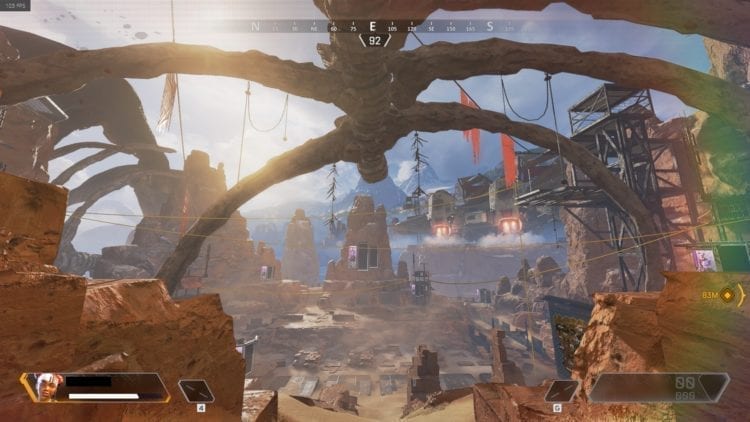 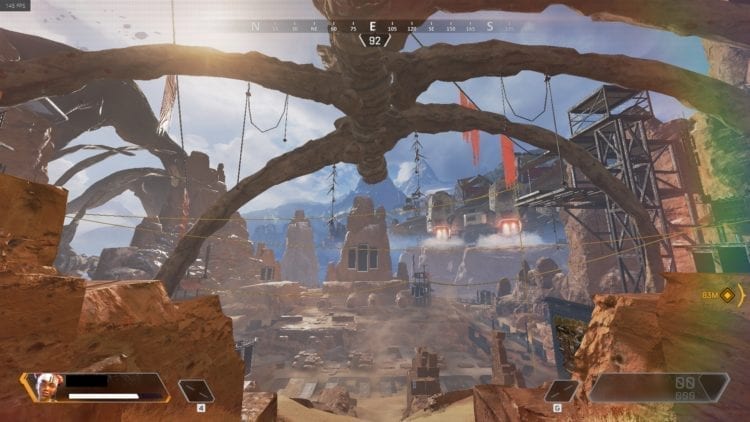 All settings at their lowest or disabled.

Looking at the map: 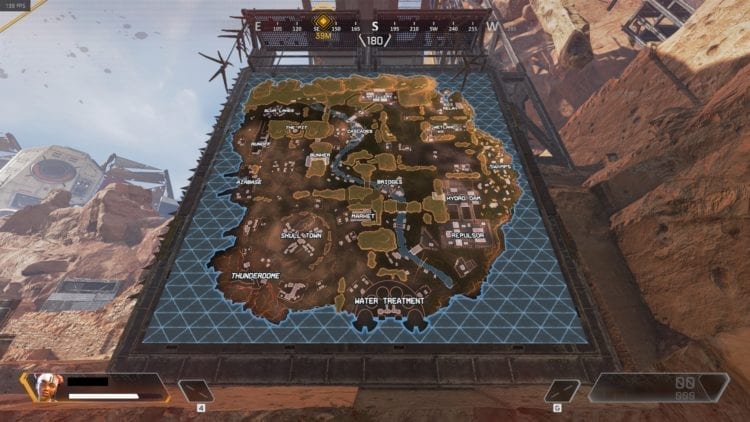 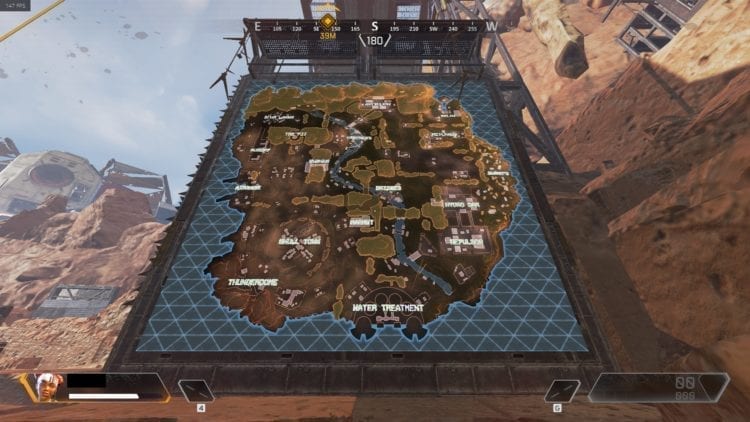 All settings at their lowest or disabled. Even the text on assets isn’t readable.

Check out the textures for the rocks, metal sheets, and firearm: 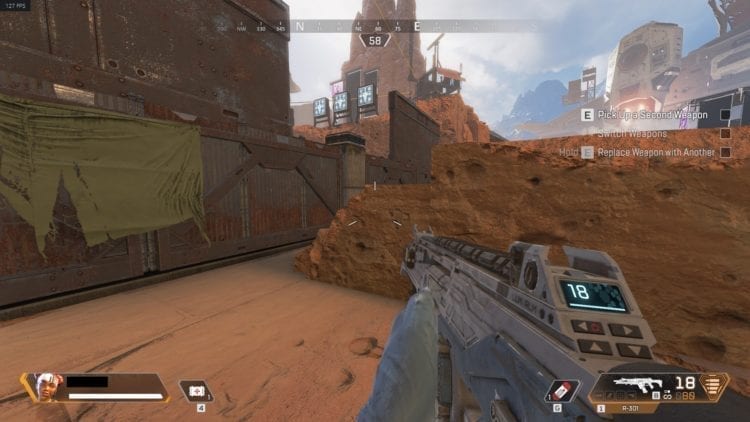 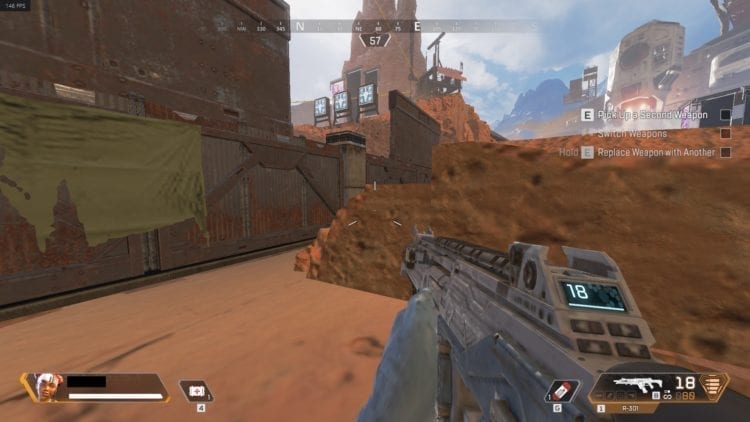 All settings at their lowest or disabled. It looks like we’re playing Counter-Strike 1.1.

The above screenshots have FOV set to 90 (default). Let’s take a look at the lowest and highest settings: 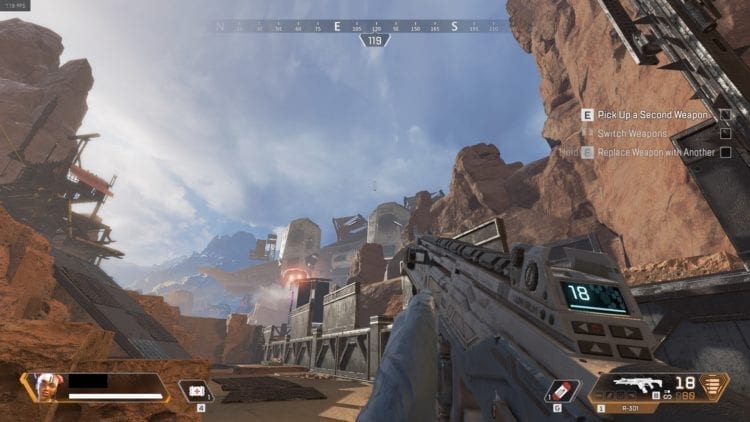 Field of view set to 70 (lowest). Part of the cliffside on the left isn’t visible. 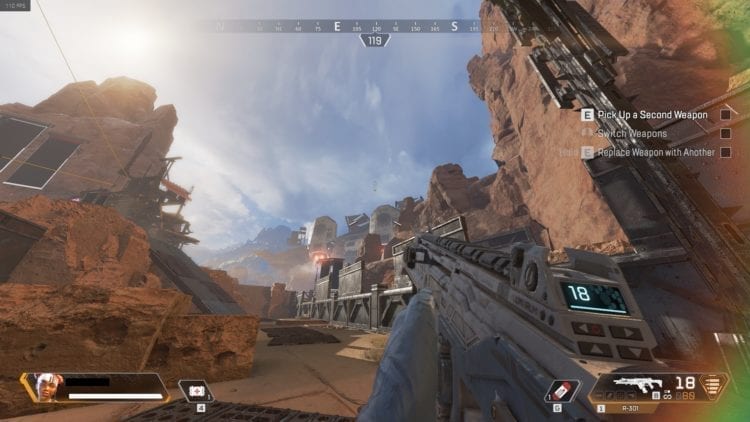 Field of view set to 110. Notice how it’s as though you’ve got fish eyes. I chose 100 instead, otherwise, I’ll get dizzy.

Another thing that amazed me in Apex Legends was the flexibility of control options. You can re-map every action on your keyboard, including additional mouse buttons. Since the game features multiple items, abilities, and tactical actions such as pinging the environment or enemies, you can find the setting that you’re comfortable with. For my part, I was OK with the default settings: 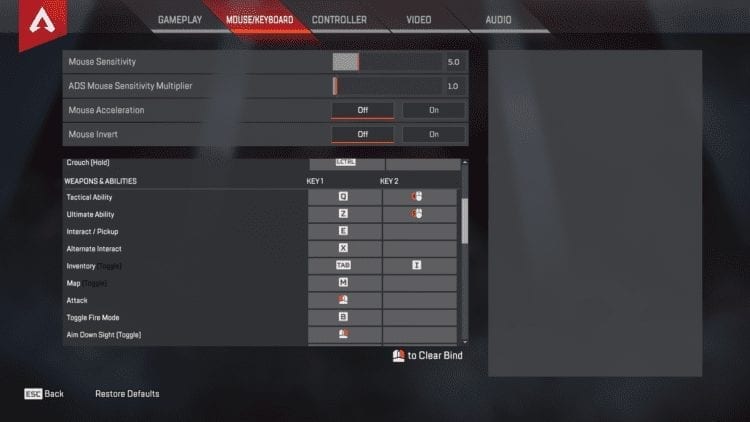 Interestingly enough, Apex Legends also offers full native support for gamepads. While you cannot change each binding separately, you can switch between presets to find one that suits your needs. In fact, even if you don’t change your button presets, you can just change the stick preset which is great for those used to “Southpaw” controls among others. 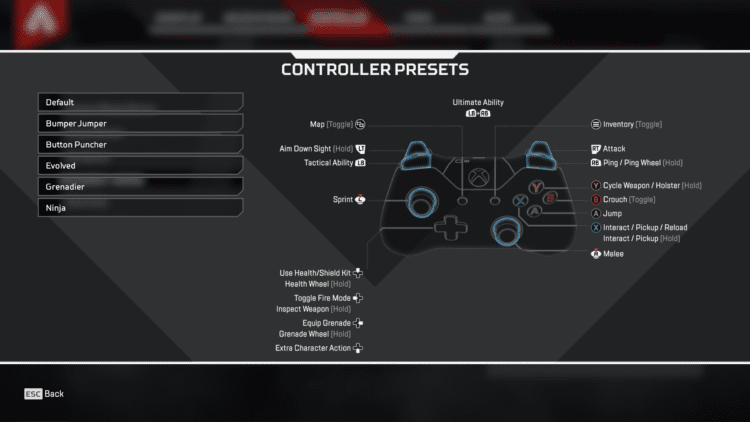 As for aim/look sensitivity, Apex Legends has a couple of ways to customize it. You’ve got your default as well as one for ADS. You can increase or decrease your aim-down-sights sensitivity or keep the same feel as when you’re hip firing. You can also change the response curve when you’re turning around, perfect for frantic engagements. Lastly, you can tweak the deadzone when you’re looking or moving.

All these options are very much welcome. Then again, if you’re playing a competitive shooter on a PC, you might be at a disadvantage when using a gamepad. I tried playing a couple of matches and I found myself going back to mouse & keyboard. If you’re used to gamepads, though, feel free to try them in the game. 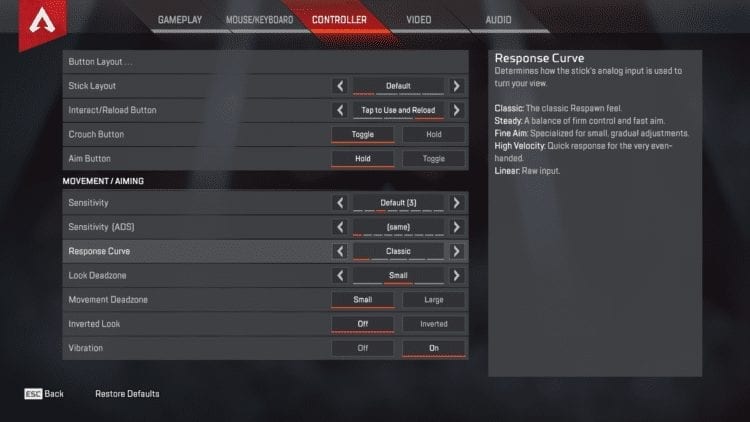 A downside to most shooters is that the HUD can get messy at times. Apex Legends is no exception given that you’re likely to be swapping weapons or picking up items from time to time, only to end up having to take a second look at what they’re for. Sadly, the gameplay and HUD options seem to be lacking in this regard, only allowing you to have the default or compact settings for item descriptions. I was thinking more of HUD scaling settings which would’ve been perfect for lessening any distractions.

In this menu, you can also change pop-ups such as player obituaries (kill feed) and the ping symbol’s opacity. If you’re streaming, you can also hide the names of your opponents to respect their privacy. Speaking of privacy, you can also disable data collection under the “Usage Sharing” setting, although it does warn you that it may cause issues with functionality. 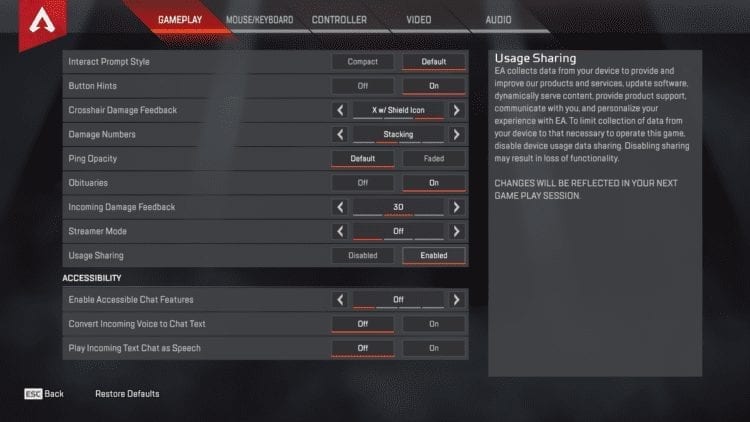 Gameplay and HUD settings. Note that you can disable Usage Sharing (collecting some of your data).

If you took a look at the gameplay/HUD options, you might’ve noticed the accessibility settings including voice chat. This is also present in the actual audio options panel along with other settings. For the accessibility settings, you can actually choose to have voice chat displayed as text. It also works vice-versa with written text chat becoming narrated by male Siri. It’s a nifty feature to have.

As for the other audio settings, you’ll be able to change the volume of the music and sound effects. You can also change from Push-To-Talk (default T) to Open Mic, even set the voice capture threshold for the latter. I found it better to use the Open Mic setting with a higher threshold to eliminate random background noise. If you’re using Push-To-Talk, don’t forget to check other software that may interfere with your input in case it has a different keybind (ie. EA Origin voice settings, Nvidia GeForce Overlay). 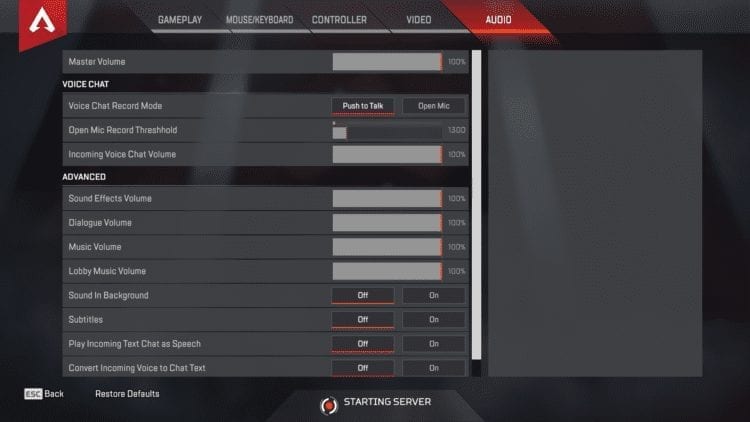 Now, this is where it gets tricky. Although Apex Legends has superb performance and control options, its biggest flaw would be server issues. There’s a small chance that you’ll encounter slightly long loading times when booting up the game. Sometimes you might even encounter an error such as the one below.

Once you’re in the main menu, matchmaking can either be a done deal, or you might need to wait several minutes until 60 players are found (60 being the max number of players in a match; 20 squads of three players each). 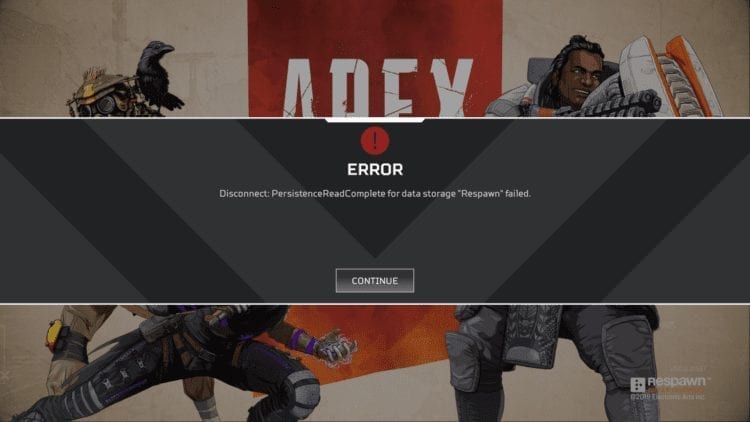 There does not seem to be a way of choosing a server that’d be more helpful for your connection. There’s a possibility I was being connected to a global server. As someone from the Philippines, I was encountering others from the USA, UK, India, Korea, Singapore, Australia, and, of course, fellow Filipinos. That also meant encountering players who were lagging or looked like they were teleporting all over the place (although these were seldom). I have a 50 MBPS fiber-optic connection and I couldn’t do anything about it.

In case you do get disconnected after a match ends, fear not. That’s because once you’ve reconnected to the server, the first screen that’ll greet you would be the match summary screen which means you’ll still get your experience points. No need to worry about placing high in the rankings only for a disconnect to completely wipe your hard work.

Given that Apex Legends just released today, there are bound to be some niggling server issues. Hopefully, connections and matchmaking will be more stabilized soon. 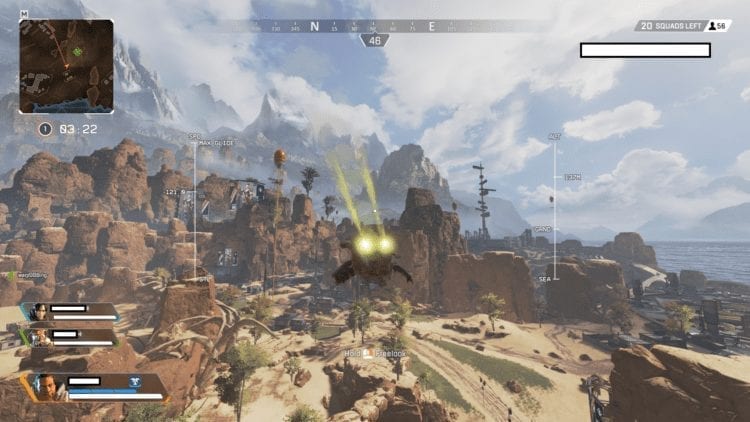 Ziplining up to a balloon and then activating your thrusters to glide through the air never gets old. Well, maybe it does if you have people shooting at you.

Overall, Apex Legends still offers an engaging and tactically-sound experience, something that refreshes the battle royale landscape. Given that Apex Legends is completely free-to-play, today’s a good day to try it out. Barring some rare issues you might encounter with connections and lag, the game’s performance is undoubtedly impressive.

There are a plethora of settings for you to tweak, perfect for those who want to personalize their playstyle. It’s also not too hard to find the right balance between quality visuals and consistent FPS. Solely talking about graphics, it’d be slightly below Call of Duty: Black Ops 4 and Battlefield V. However, it definitely ranks higher than Fortnite, PUBG, and a dozen other battle royale titles out there. I’d consider this a fairly smooth launch for a game that completely came as a surprise.