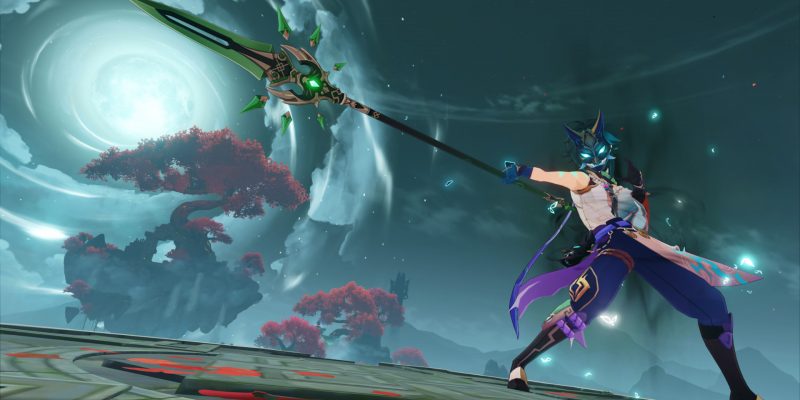 Xiao is the newest 5-star character to join Genshin Impact‘s roster as part of the “All That Glitters”/1.3 update. His banner, “Invitation to Mundane Life,” lasts from today until February 17. Here’s our guide to help you with Xiao’s weapons, artifacts, and talents.

Note: Please be reminded that this guide is currently a work in progress since Xiao’s fairly new. I’ll continue updating the article after doing more tests. For more information about the game, check out our Genshin Impact guides and features hub.

Although the Primordial Jade Winged-Spear is featured in the “Epitome Invocation” wish, it’s still a 5-star weapon. That means RNG (and any fates/cash you want to spend) will heavily affect whether you get it or not.

Anyway, I consider this the best-in-slot weapon for Xiao due to its crit rate stat and inherent effect (ATK increase with a maximum of seven stacks, and an overall DMG increase once you have the max stacks). Given that Xiao will often use his plunging attacks after popping his ult/burst (more on this later), you should have an easy time keeping this effect active. 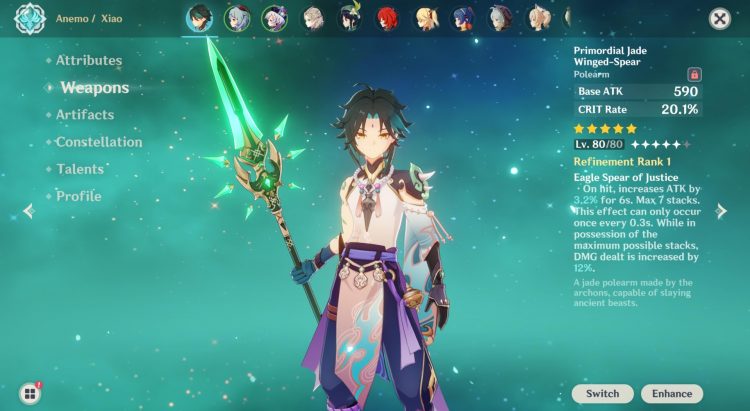 The Gladiator set comes from Spiral Abyss chest rewards and boss kills, including the new Primo Geovishap fight. Meanwhile, the Viridescent Venerer set is from the Valley of Remembrance domain. The former adds +18% ATK and the latter gives +15% Anemo damage bonus.

For individual artifact stats and sub-stats, here are some tips:

Note: I’ve tried using the 4-piece Gladiator set and 2-piece Viridescent plus 2-piece Noblesse Oblige, but my damage output was lower. I’ve also yet to test the Bloodstained Chivalry set (for Xiao’s physical damage), but my set’s stats are terrible. 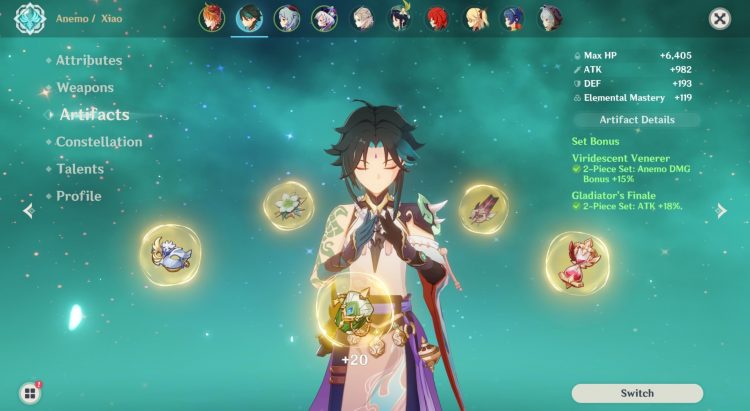 Xiao uses Prosperity books and slime components to level-up his talents. Now, I don’t think his elemental skill, “Lemniscatic Wind Cycling,” should be a priority. You’re more likely to use it just to gain elemental orbs (each successful dash attack generates three particles).

Note 1: If you’re using Xiao’s elemental skill to charge his ult, my suggestion would be to cast it at intervals. The dash attack’s animation is blindingly fast that you might also end up missing if you cast it twice in quick succession.

Note 2: Although Xiao’s elemental skill generates particles when he’s in his regular form, it won’t spawn particles if used while his burst is active. Outside of getting kills for a few measly orbs, you’d be back down to zero after your burst’s DPS routine. I’m not sure if this is a bug or if it’s working as intended. 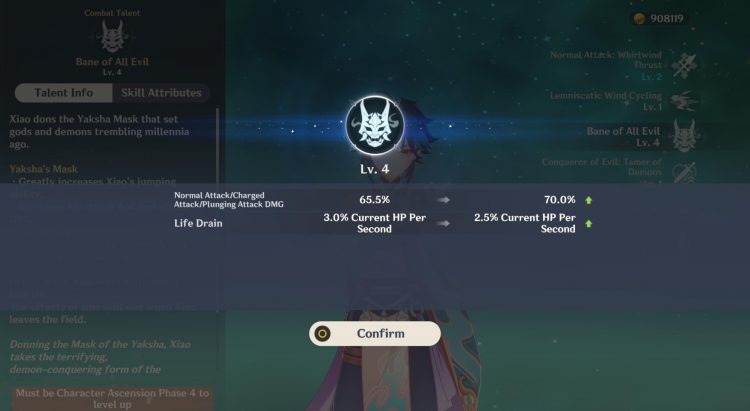 Anyway, the important thing here is Xiao’s burst/ult known as “Bane of All Evil.” It should be your go-to ability once it’s available. It converts all of Xiao’s damage into Anemo while increasing his attack’s DPS and AoE.

Now, the tooltip might say that the effects end once Xiao leaves the field, but the whole thing also lasts for roughly 14 seconds. Likewise, Xiao loses a bit of HP while the effect is active, but leveling the talent lowers the percentage of HP that’s lost. Leveling also provides increases to your normal, charging, and plunging attacks. In general, you’d be jumping and spamming plunging attacks while the burst is ongoing. Try to reach the maximum height of his jump prior to plunging (the high plunge attack from maximum height has a higher coefficient than the low plunge attack).

Note: Long story short, you’ll want to level-up Xiao’s “Bane of All Evil” followed by “Whirlwind Thrust” (since this also boosts plunging attack damage). Don’t bother with “Lemniscatic Wind Cycling” unless you have a lot of resources. 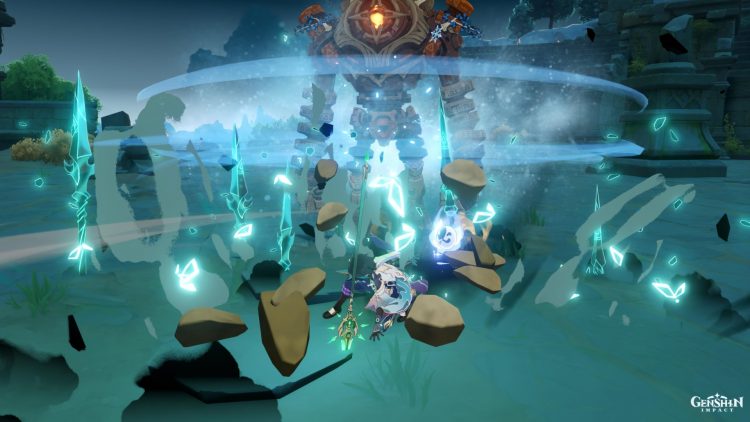 A word on ascending Xiao’s level

In my opinion, miHoYo already made a mistake in how Xiao’s ascension is handled. First off, you need Vayuda Turquoise from the Anemo Hypostasis (which has existed since Genshin Impact launched). The problem is that the Juvenile Jade only drops from the Primo Geovishap elite which, coincidentally, requires 40 original resin too.

Since the Primo Geovishap was only added today as part of the 1.3 update, you’re going to have to farm for it repeatedly. 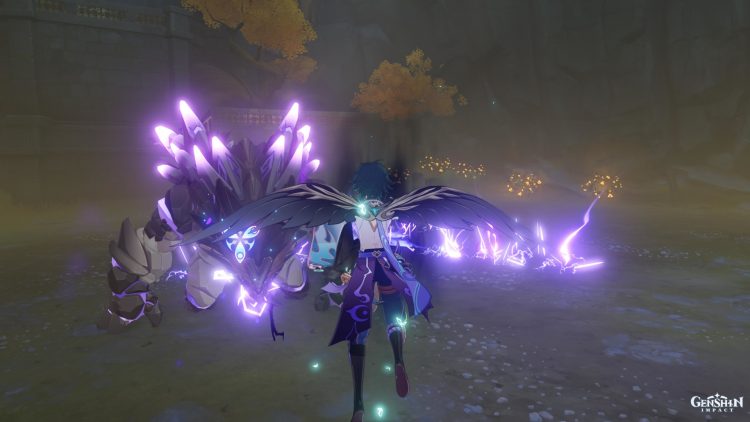 Even more frustrating is the fact that the Primo Geovishap drops various gemstones, but it does not drop Vayuda Turquoise. Imagine a scenario where you need to farm ascension mats from two elites, and you’ll realize how annoying that is. Although it’s possible to use the alchemy bench’s new conversion function, it’d still require gemstones of another type as well as Dust of Azoth.

Note 1: Xiao requires 46 Juvenile Jade (among other things) to reach level 90. If that’s too much, then you’ll need 26 Juvenile Jade to be viable at level 80.

Note 2: It’s rumored that a future character, Hu Tao, will also use Juvenile Jade as an ascension material. 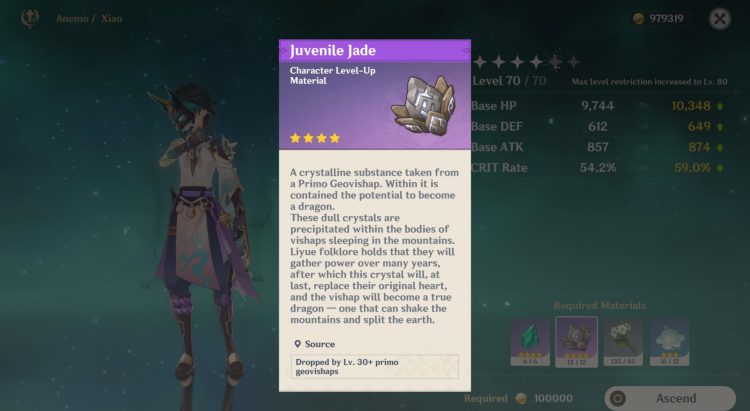 Xiao can be a viable main DPS in your squad, but it’s still too early to tell. His burst followed by the plunging attack spam can be ridiculously deadly, but it’s going to take a lot of effort for him to reach his full potential.

It’s also worth mentioning that, as an Anemo main DPS character, Xiao can’t proc elemental combos such as Melt or Vaporize. Plus, you’re bound to have issues in the Spiral Abyss when Xiao’s fighting since he can’t break shields (you need others to do that for you). When you already have comps with Keqing, Diluc, Klee, Tartaglia, and Ganyu carrying the day, it’s hard to find a niche for Xiao’s expertise.

If you really want to choose Xiao, you can pair him with a shield-generator like Zhongli or Albedo since he’ll be out on the field often. Likewise, try to pop a healer’s ability before Xiao uses his ult. Healing fields from Bennett, Diona, and Jean, as well as the abilities of Barbara and Qiqi are integral. Since Xiao’s burst (or “14 seconds of fame”) ends abruptly when he gets swapped out, he’ll need to get topped up in case he takes a few hits.

Lastly, Xiao’s elemental skill doesn’t even generate particles while his ult is active, completely shafting his burst recharge. You’ll probably need an “Anemo Battery” character. Someone like the Anemo Traveler, Sucrose, or Venti can use their abilities. Then, just quickly switch back to Xiao so the floating particles go to him. 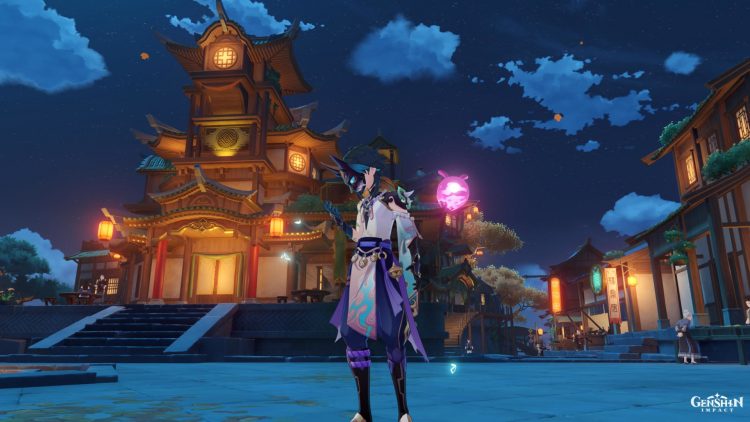