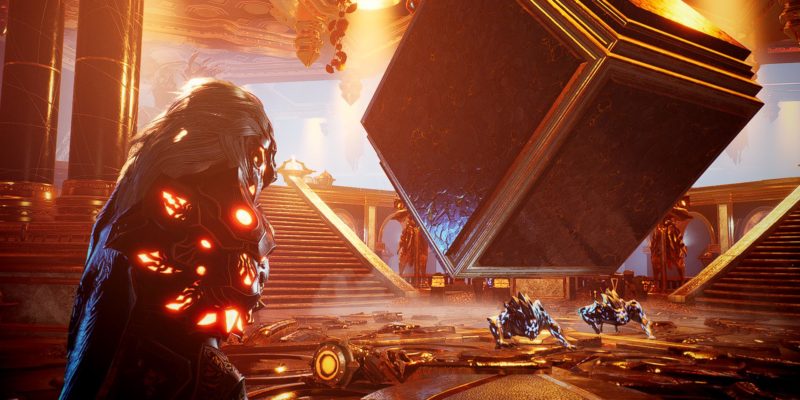 Combat in Godfall kind of has a lot going on. This guide is going to break down the general mechanics and let you know what sort of options you’ll have when fighting the hordes of whomever. Just remember: if you’re terrible at the game, you can respawn, so just hit things and laugh when they kill you. But don’t laugh too hard. You’ve got neighbors.

Godfall has default regular and strong attacks to choose from. Both deplete the lifebars of your enemies. As you whittle health down with your regular attack, you’ll see a remainder appear in place of some of what you’ve removed. This is how much the enemy can heal if it has the ability to do so. When you hit a damaged enemy with a strong attack, this remainder will be shattered. If you get enemies down to next to nothing/just their remainder, hitting them with a strong attack will cause them to shatter via a green explosion.

Both regular and strong attacks have normal combos where you just hit the button repeatedly. You can use a combo where you launch multiple regular attacks and then follow it up directly with a strong one. Just use a strong attack after your third regular strike and it should work. You can also block in Godfall. Holding down the button allows you to bring up your shield and turtle with it. The shield isn’t massive, so you’ll only be able to block direct hits with it. Blocking right before an attack hits will parry the enemy strike and give you a brief opening to press the attack. You can charge the strong attack and unlock a weapon action skill that gives you another strong attack based on pressing the attack button again when you see an aura appear around your character. 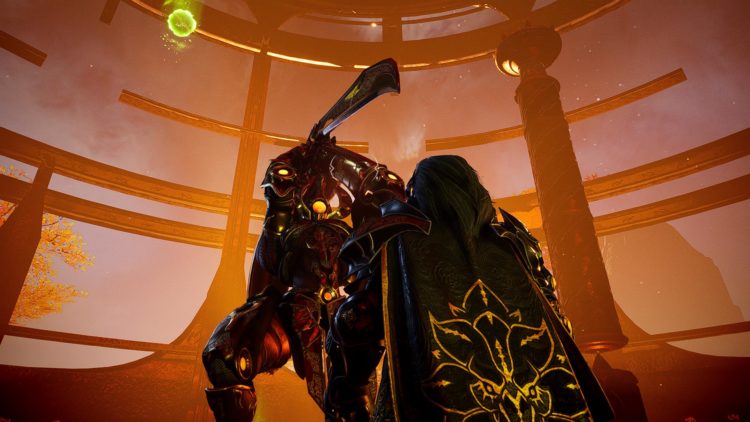 You have several additional combat options with the shield. By default, it can be thrown at an enemy, although it’ll hit two if they’re standing right next to each other. Most enemies will get knocked down by a shield throw and are then susceptible to a takedown which will do a large amount of damage. You can unlock more shield abilities via the skills menu. One of these allows you to throw your shield in an arc and hit multiple enemies near you. Another slams your shield into the ground to do AoE damage. Just know that all of the shield abilities are tied to a cooldown timer, so they must be used sparingly.

Next up are Godfall‘s weapon techniques. As you hit enemies, a meter builds above your weapon icon. Different weapons have different numbers of bars. You simply need to press the modifier button followed by a strong or regular attack and this will lead to two extra powerful strikes. Now, the game doesn’t let you interrupt your combos for any of these things, including blocking, so you’ll have to wait until your attack animations have ended. You also can’t include a weapon technique in a standard combo, so be prepared. Just like shield attacks, weapon techniques also have variations, such as the siphon skill which allows you to steal health from foes. 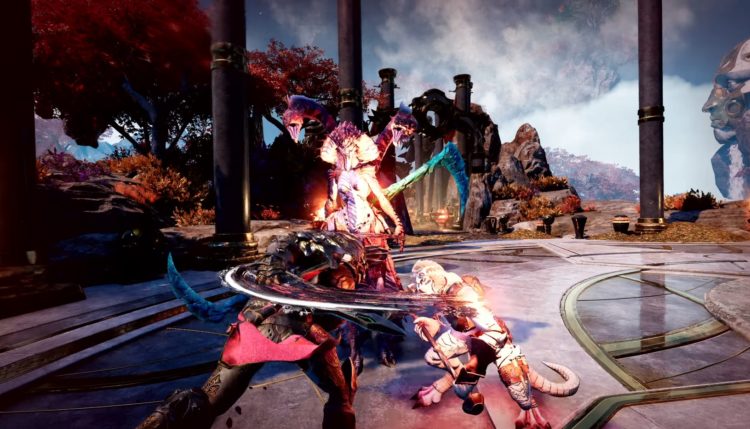 There’s another meter at the bottom left-hand corner of the screen. This is tied to Archon mode. When it’s full, you can unleash it and gain extra effectiveness plus hyper armor. It can turn the entire tide of a battle, so make sure and use it when you need to. You can also dodge, which grants you some I-frames, although not as many as a lot of similar games offer.

The combat in Godfall certainly feels satisfying. Like with any game though, it will take some trial and error to get into the swing of things. For more analysis on the game, check out our full review.