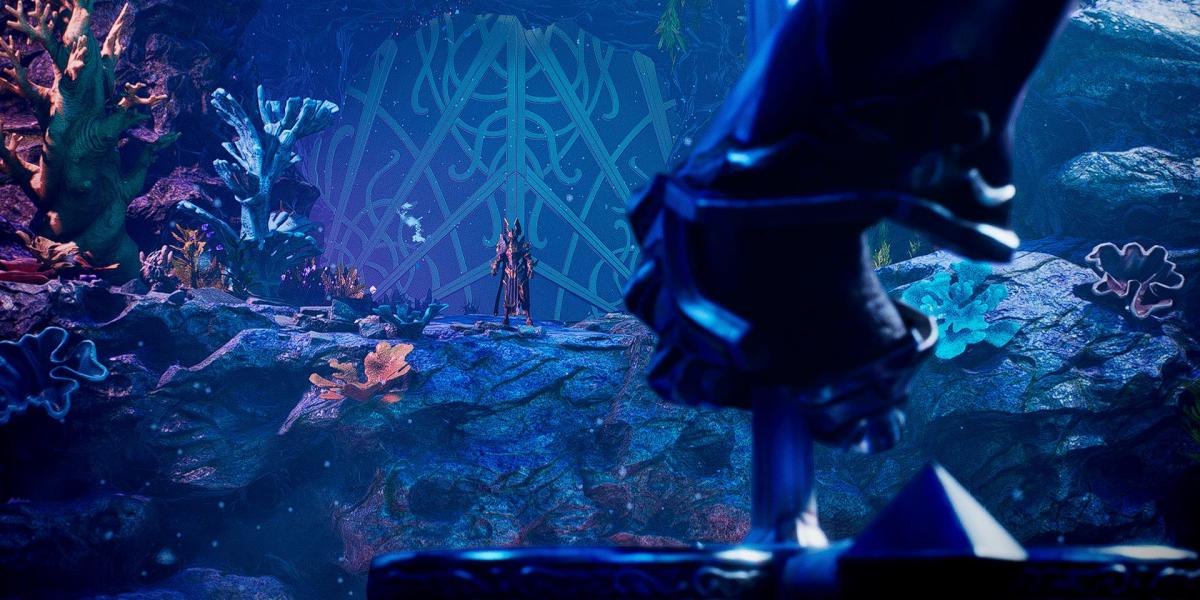 Warframe and Destiny have made a ton of money. The allure of running through areas while taking down enemies and grabbing loot and resources is a time-tested grind that goes right for the brain’s pleasure center. While those games obviously focus on shooting, Godfall plays more like a light Dark Souls. It won’t win over anyone who doesn’t like these sorts of mindless looter games, and it doesn’t yet have the legs to tangle with those giants. But the strong, entertaining combat and beautiful visuals make it a good time. If the combat does it for you, that is.

Godfall is all about two brothers. Er, siblings, actually. Orin and Macros are Valorians — soul beings created by the Archons that inhabit armor or something. I don’t actually know, nor do I honestly care. The game starts with Orin and Macros going to war, only for Macros to win. He drops Orin into the ocean and leaves the sibling for dead, only for Orin to return to the fight with the help of a collection of giant faces known as the Seventh Sanctum. Together, they’ll work to stop Macros from fulfilling the Rites of Ascension and either attaining godhood or destroying reality.

No one plays these games for the story anyway. Granted, I don’t think Godfall necessarily handles this any worse than most other games. At least it’s mostly clear as to who you are and what you’re doing. But there’s no sense of scale in the game’s storytelling, as it’s almost all communicated via exposition with one of two other characters. As Orin, you’ll travel between the realms of Earth, Water, and Air while riding in armor known as Valorplates that can be crafted with resources. If Orin is in a male Valorplate, they have a male voice actor. Likewise, if you choose a female Valorplate, Orin gets a voice to match. 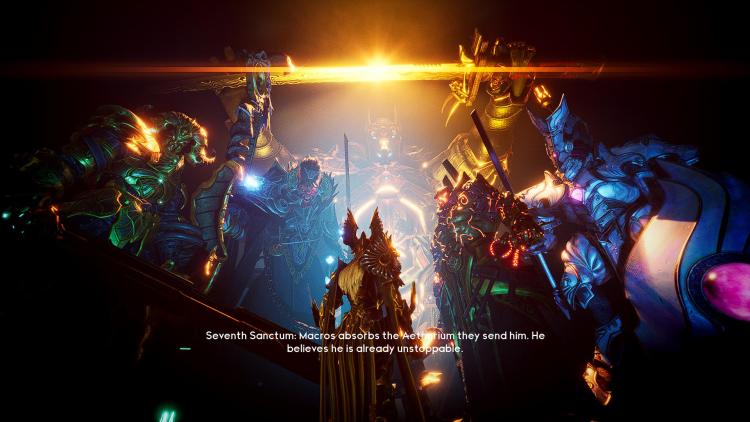 Zone of the benders

Godfall takes place in the three aforementioned zones where you can explore for loot and experience or do quests for specific rewards from the map. The story mode is focused on Orin fighting several of Macros’ lieutenants. What that really means is that you’ll go into the zones and follow markers which take you to a few different encounter types. You’ll see enemies spawn normally while you’re out and about, but the actual encounter activities have you do things like fight enemy waves for a couple of minutes or destroy enchanted stones that hold portals open.

Zones have treasure chests with gear in them and containers called motherlodes that have materials you’ll need to craft more Valorplates. You start with a single Valorplate and get a second one after the introductory mission, but you’ll have to craft more with Valor cores you’ll find on abandoned plates and materials from the aforementioned motherlodes. Valorplates aren’t honestly all that different from each other, in stark contrast to the frames in Warframe. They each have a single unique buff, such as reduced damage or increased chances of inflicting enemies with statuses. And they offer different abilities during Orin’s rage mode stand-in, which I’ll get to in a bit.

You’ll go back to the zones again and again and they’ll no doubt get repetitive to someone familiar with the larger number of locales in similar games. They’re attractive and well-designed though, and they look rather different from one another. Godfall‘s story often focuses on sending you to accept quests in these zones in order to acquire sigils to face Macros’ lieutenants. If you were actually expecting some kind of series of story missions, you’ll be somewhat disappointed by this, as instead, you’ll be doing mostly interchangeable missions where you go from point A to point B to fight a mini-boss in order to get the sigils needed to unlock the next boss battle. 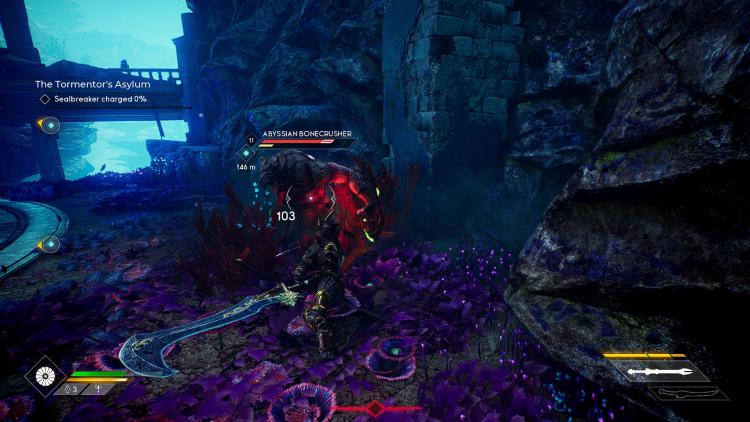 Combat in Godfall is rather on-point, as far as I’m concerned. There are several different weapon types that are useful in their own way: longswords, greatswords, twin blades, hammers, polearms, they’re all here. Orin has a regular and strong attack. Hitting enemies leaves a certain amount of their healthbar that can be healed depending on circumstances, but you can erase this by hitting them with a strong attack. Enemies will take a couple of extra hits if you try and finish them with the regular attack. Utilizing the strong one when you see that they’ve got nothing left but a remainder will cause them to shatter, which is a faster kill.

Orin also has a shield that can be used to simply block damage or parry attacks altogether. Parries don’t carry any default gain other than leaving your enemies vulnerable for a couple of seconds, but there are skills and gear abilities that enhance the parry’s usefulness. Godfall also lets you throw your shield, which knocks down foes and opens them up to a takedown which often kills them outright. There’s even a skill that lets you use a takedown after a successful parry if certain conditions are met. Holding the shield button also ties into other abilities, such as throwing the shield so it hits multiple enemies, or slamming it into the ground.

As you hit enemies, a gauge above your weapon icon fills up which allows you to use a special. There are multiple variations of this as well, such as Orin having one for each type of strike, as well as the ability to siphon health off of enemies. Finally, there’s Archon mode, which is the aforementioned rage mode. This lasts for a bit of time and gives Orin hyper armor and specific buffs that are unique to Valorplates. One Valorplate can summon help, for instance. 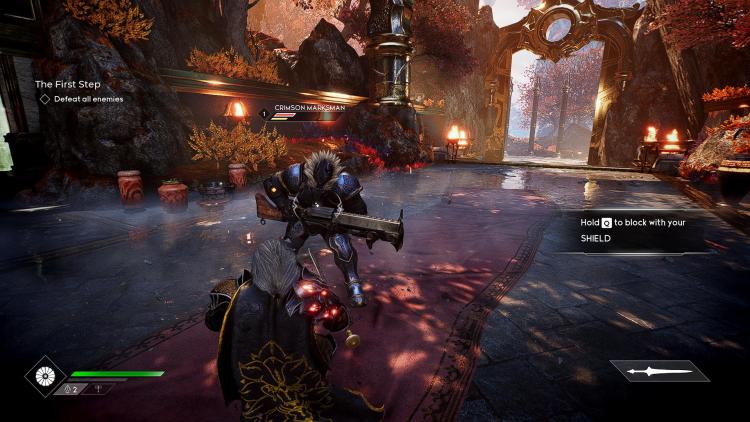 Falling away from me

That sums up Godfall for the most part. If you like fighting a bunch of enemies and leveling up your skills, this is a fine choice for all of that. The combat is quite good, as it allows you to dodge, parry, and take part in plenty of hectic shenanigans. The game would be tough if it weren’t for the fact that you can simply respawn feet away when you die as if it were an arcade game with infinite quarters. The boss battles are mostly fine and, by the time you get to the second one, their health refills when they respawn, adding some much-needed challenge. Orin has a healing item with thee charges that can be refilled by collecting green orbs dropped by slain enemies and found by smashing objects.

The thing is, there’s just not much else to the game other than the combat. There’s plenty of loot, although there aren’t typical armor pick-ups. But you can equip rings, charms, and banners. There are also several augments that you can slot that give you more bonuses. More slots unlock as you level up. Gear can be improved at your home base, but doing so is pointless as it only offers modest increases for a surprising amount of materials. This is more for endgame gear than anything else. There’s a solid amount of content on offer in Godfall, but anyone who doesn’t really enjoy the combat will grow tired of it after some time has passed.

I will say, though, that it’s a lovely game from a visual standpoint, and I have enjoyed the time I’ve spent with it. It doesn’t break the mold and it won’t surprise people much, but I like the combat considerably more than I have in most similar games. As one final note, the camera is glued to your back, so it’s much more accurate to play with a mouse and keyboard than with a controller. Positioning is actually fairly important. Alright, that’s it. You can go home now. 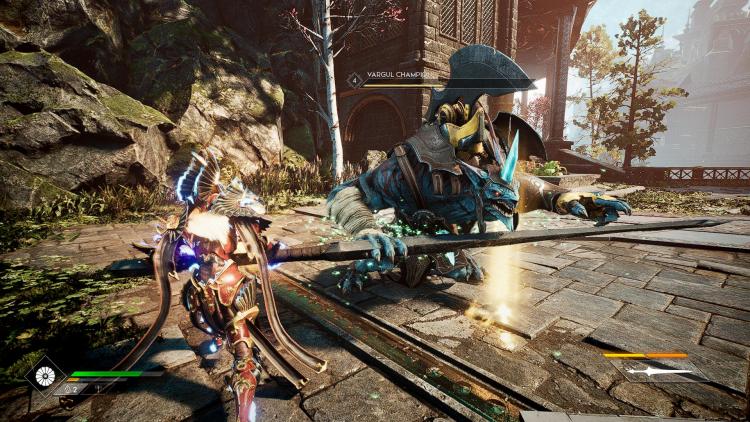 It's derivative, only has three zones, and doesn't have much to offer besides its combat, but Godfall will be enjoyable to anyone who just wants a well-tuned, good-looking action RPG to slash their way through.

By Matt Henzel5 days ago
News