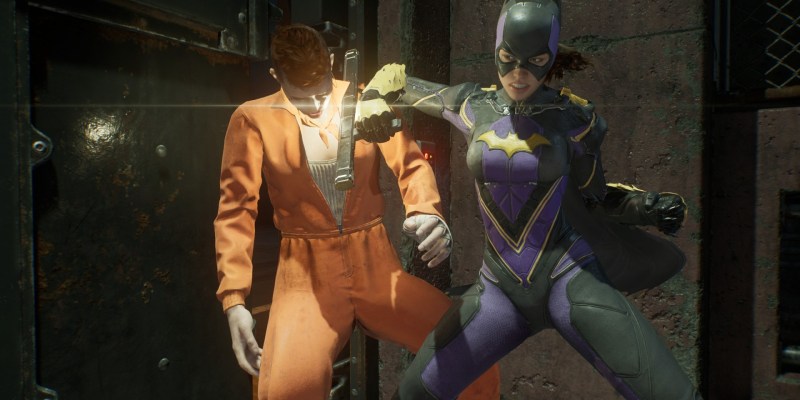 Arkham Knight famously had such a disastrous PC launch that the game had to be pulled from sale. As such, any subsequent Batman game on PC was going to be eyed with a great deal of uncertainty. Does Gotham Knights have a better PC port than Arkham Knight launched with? Absolutely! Does that mean it’s good? Not even close! The game is definitely playable and I have yet to see anything game-breaking, as I haven’t come across quests that wouldn’t progress or invisible enemies like some other players have. But as for performance and input functionality? This version is in pretty bad shape.

I’m using an RTX 3090 FE alongside a 2600X and 16 GB of RAM. Gotham Knights has the worst performance that I’ve run into while using this particular build. It’s mostly fine in instanced environments, as I’m usually able to hit 80 fps pretty comfortably. But considering this is an open-world game, the important part is out on the main map. My fps fluctuates from around 27 to 44 here unless I’m on a highway with no buildings in sight, at which point I get 50 to 60. This has been fairly consistent and this impacts my enjoyment of the game. I’m not sure why the optimization is so bad, but I’m not alone in this.

All of the above was experienced with the settings at max. Turning the preset to lowest made hardly any difference. Suffice to say, this is purely terrible optimization in regard to the city itself. But wait, it gets worse. With ray tracing turned on, Gotham Knights became an unplayable, stuttering mess. The framerate itself didn’t technically drop much, but the stuttering was constant. I’ve never seen anything like that before. The game does look fairly good, though. I just wish it ran better. A lot better. 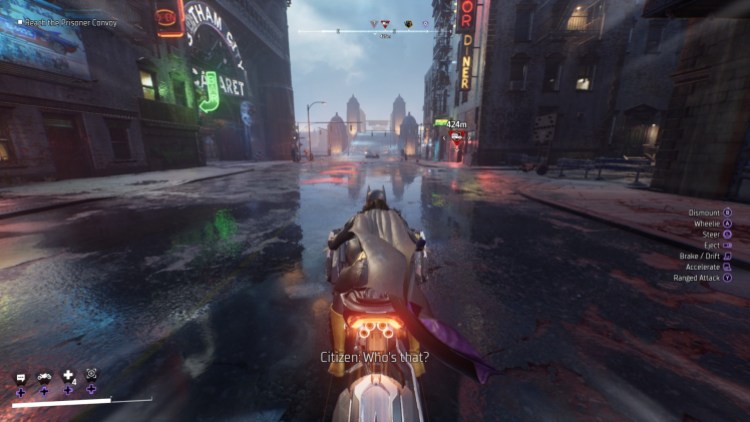 I also wish the performance wasn’t the only problem, but it sadly isn’t. Astoundingly, Gotham Knights apparently doesn’t have actual analog support for moving your character, so even when playing on controller, the left analog can only input eight directions instead of a full 360-degree range of movement. I’d wager the analog stick is set up to emulate a keyboard. I’d say that it’s possible that this was just the way the game was developed, but that sounds like madness to me. Due to this, the movement controls just feel off. Just like with the performance, this is begging for some kind of fix. What did the Batman universe do to deserve this?

This might be a bit repetitive of me, but there’s yet another problem with inputs, at least for me. In the past, I had a controller with serious stick drift that caused controller prompts to appear onscreen all the time when I was playing with mouse and keyboard. Gotham Knights is giving me the opposite problem. While playing with a controller, the icons keep jittering back and forth between keyboard and gamepad. This is another problem I’ve never seen before. The pile of issues this port has is kind of jaw-dropping. Again, they’re not so bad that the game has to be pulled from sale like last time, but that’s pretty much the lowest bar there is. Let’s look at the related menus. Remappable controls and such. It’s all standard, especially for a AAA game. 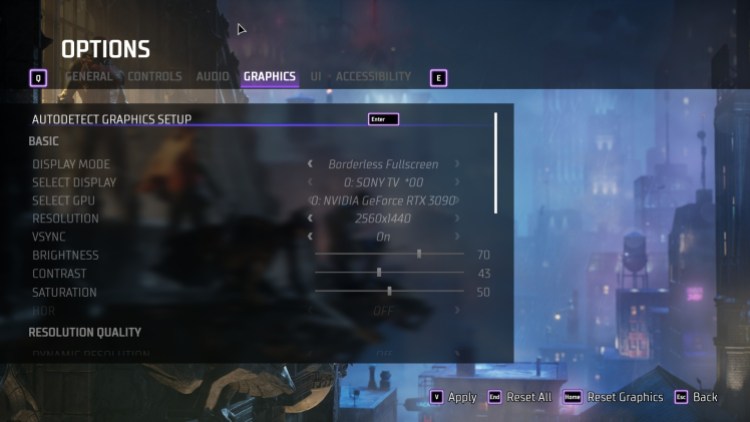 There’s no fullscreen mode, strangely. I’m not sure why, but this is the second AAA game that I’m aware of this week to launch without it. 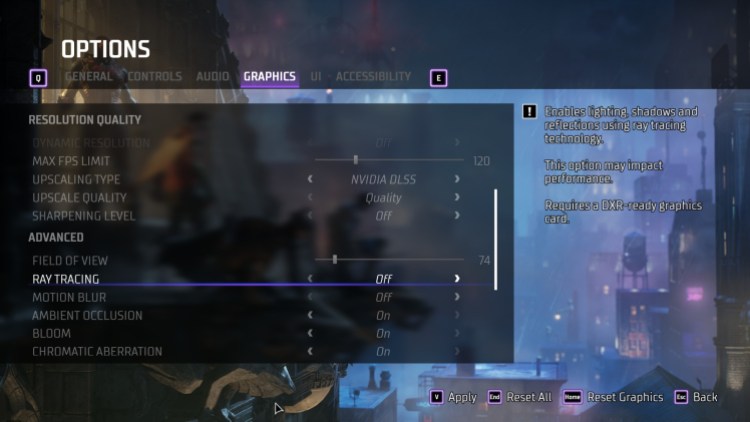 You can set your max fps with a pretty generous slider. Good luck getting much mileage out of that, though. There are multiple types of upscaling but I’m not sure how or even if that works, as it gives me no boost to my fps. There are no ray tracing options beyond on and off. Again, this makes the game unplayable so maybe avoid it for now and possibly forever. There are a good amount of options here. Too bad they don’t matter at all for me. Even at the lowest preset I was hovering in the 30s while standing still in the middle of the street.

I actually appear to like Gotham Knights as a game more than the average bear, but that doesn’t mean I can excuse what is probably the worst AAA port I’ve seen in the years I’ve been doing this job. Warner Bros. fixed the last one after a while. Let’s hope it’s willing to do the same thing again. But this ain’t Arkham Knight, so people are never going to be as nice about it. Better luck next time.

Resident Evil Re:Verse returns for a cross-play beta this weekend