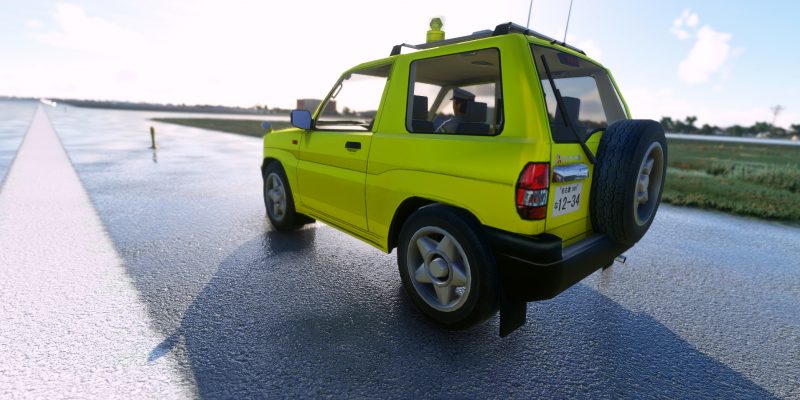 Microsoft Flight Simulator has been turning heads for quite some time now thanks to its beautiful, immersive world. This sense of immersion is thanks to the striking amount of details that its developers have poured into it. Most of these scenery details look fabulous when soaring a few hundred or thousands of feet above. But, what about taking it down to ground level? You’re not really supposed to, but that hasn’t stopped curious modders from allowing players to do just so. One such mad lad, who goes by the handle “MrFace,” has now provided players with such liberty by making a drivable car in Microsoft Flight Simulator.

This car is a simple virtual rendition of a Mitsubishi Pajero compact SUV. The model currently has basic textures and crude animations, but it’s fully functional and even has a fully rendered cockpit—erm—interior. Even when using a joystick, I was able to take this add-on out for a spin around Microsoft Flight Simulator quite easily.

Driving around a bit of Pisa, Italy, I was surprised to see just how detailed the world is at ground level. Some road textures, along with trees and other AI vehicles aren’t spectacular, but they’re still good enough. However, the buildings in this town, despite being auto-generated by AI, are surprisingly high quality. Not to mention the soundscape is also quite fitting with the sound of wind and ambient traffic all present. You’re not supposed to be in these areas, and yet, the devs behind the sim bothered going the extra mile anyway. And now with an add-on like this, you can get up close and personal with the sim’s world from an entirely different perspective.

From above to below This Mitsubishi Pajero add-on was actually ported over from FSX. Interestingly enough, I remember playing with that version of this add-on many years ago; there were actually quite a few other such vehicle mods. But, FSX‘s ground level scenery is nowhere near the level of detail that we now have in the new Microsoft Flight Simulator. So now, especially in photogrammetry cities, you can really bring the real world inside your home both from the air and on the ground using this sim. Google Street View can step aside, we have a new way to explore. I highly doubt the developers ever intended for things to go this far, but I’m sure they must be amused to see the community building upon the sim in such unique ways. You can now literally fly into an airport, park, and then spawn this car and go driving into the city you just landed into. It’s such an absurd idea for a sim like this, and yet so whimsically fun at the same time. And don’t forget the drone camera can also be used to simulate walking!

As Microsoft Flight Simulator gets more upgrades over time and more add-ons such as the addition of a car come out, the sim might truly turn into one of the most versatile virtual exploration tools that have ever come to the consumer market.