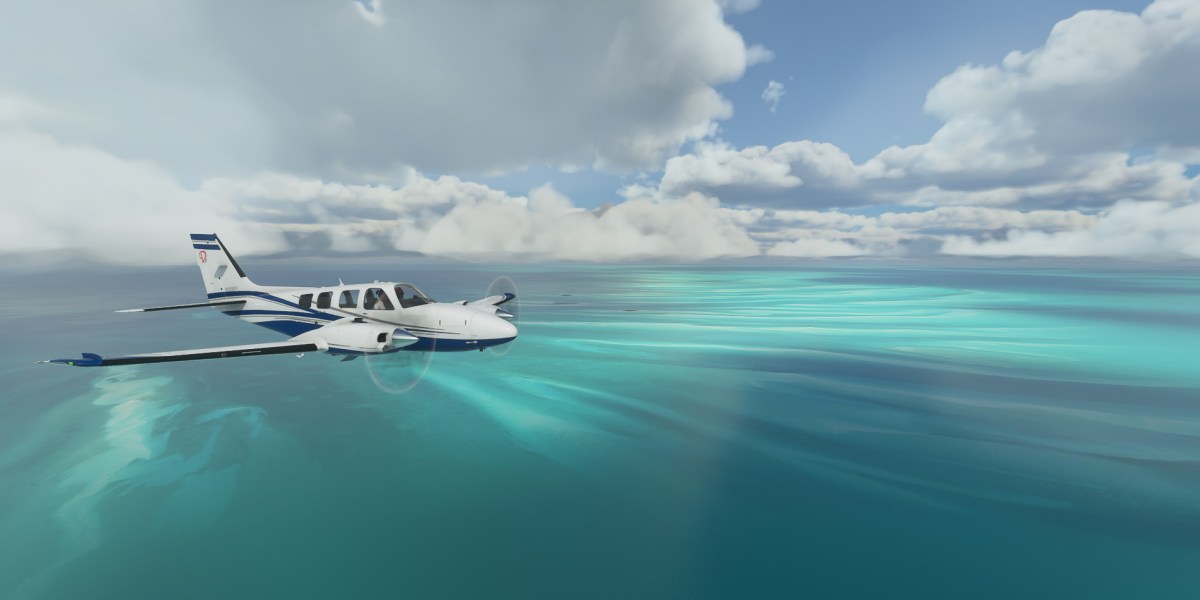 Before release, nearly every time I saw a screenshot or video clip of Microsoft Flight Simulator, it was usually showing off an iconic area from around the world. Places like New York, London, and Sydney, for example. Spots like this are all to be expected; they’re easily recognizable by the average person, complex enough to display how well the simulator flexes its amazing tech capabilities. Indeed, the real star of the show is the world scenery. Powered by satellite imagery from Bing Maps and 3D modeling tech from Blackshark AI, Flight Simulator contains over two petabytes of satellite data for unprecedented detail.

Basically, the entire planet is here in this one simulator. However, that isn’t to say that every location looks as good as the next. Thus, let’s take a flight over a country without the megastructures of major cities and see just how good of a job Flight Simulator can do with relatively basic data.The country in my example just so happens to be my own — The Bahamas.

With a population of fewer than 500,000 people scattered across about two dozen islands, the Bahamas is easily one of the least populated nations on the planet. Yet, it’s still a fairly well-known place, primarily thanks to its extremely close proximity to Florida. (It’s a 15-minute flight). Even so, satellite data for the Bahamas is a little basic in comparison to that of its next-door neighbor, the United States. That right there is what determines how good a place looks in Flight Simulator.

The three tiers of scenery quality in Flight Simulator

There are three tiers of scenery complexity in this sim: Handcrafted, Photogrammetry, and Autogen. The “Handcrafted” tier is really only reserved for specific airports (which a varying amount are included across each of the three editions of the sim) and specific points of interest like the Eiffel Tower, the Pyramids of Giza, Big Ben, and the Statue of Liberty, to name a few. 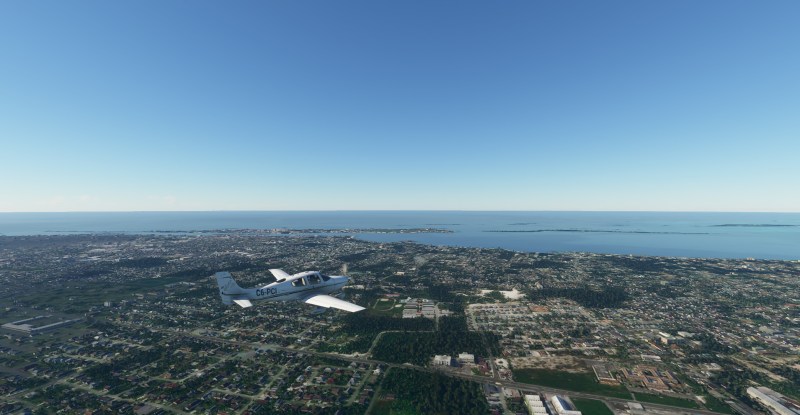 Tier two is the Photogrammetry areas. This includes places where satellite data is combined with advanced 3D map modeling to take what is basically a snapshot of that area of the planet and mold it into a 3D environment. The results are really good given all that’s involved. It allows viewers to make out specific buildings in fairly good detail, right down to the different colors of the walls and logos (if any). A lot of Florida is mapped in photogrammetry, primarily the west coast with large cities like Miami, Fort Lauderdale, and the like, along with other major areas like Orlando.

But right across the pond in the Bahamas is a different story. This falls under the third tier, Autogen, where the computer has taken the satellite imagery and basically does a guessing game of what it thinks should be there: a house, a large industrial building, an apartment complex, etc.

Let’s start off with my home island, Grand Bahama. Located just about 30 minutes away from South Florida, it holds the second largest population in the Bahamas— over 30,000 people. Much of it is uninhabited, however. That makes our tour fairly simple. Its main airport, Grand Bahama International (MYGF) is represented fairly well here, at least in terms of layout. That really is the key thing about any airport you visit in Flight Simulator. The layout is fairly accurate, but the exact placements of parking spots and buildings can vary wildly. 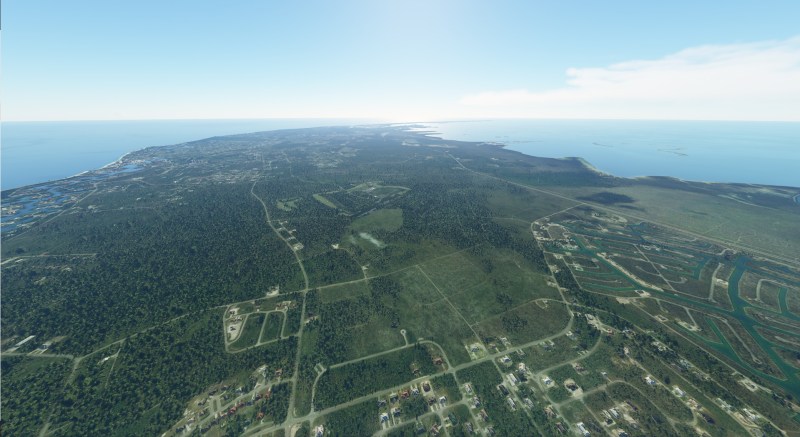 An aerial view of Grand Bahama Island, the place where I’ve (unfortunately) spent most of my life.

Moving along, the actual buildings in MYGF are not at all exact. For default scenery, however, it still manages to get the job done. What I was really curious to see is how Flight Simulator would handle the neighborhoods of such a small place.

I live about 20 minutes away from the airport. Using Flight Sim’s super-good Drone Camera, I was able to follow the highway along, take the usual right turn, and just a quick zip down the road, boom — my neighborhood. Just about every home I could think of is present, including my own. As expected, the actual colors and shapes of the houses are not accurate, but the fact that they’re there at all and in the right place is both exciting and daunting at the same time. I also happen to live just a few minutes away from a resort that I worked at for a few months. Low and behold, that too is present. Again, the shape isn’t definitive, but the AI still managed to represent it well. 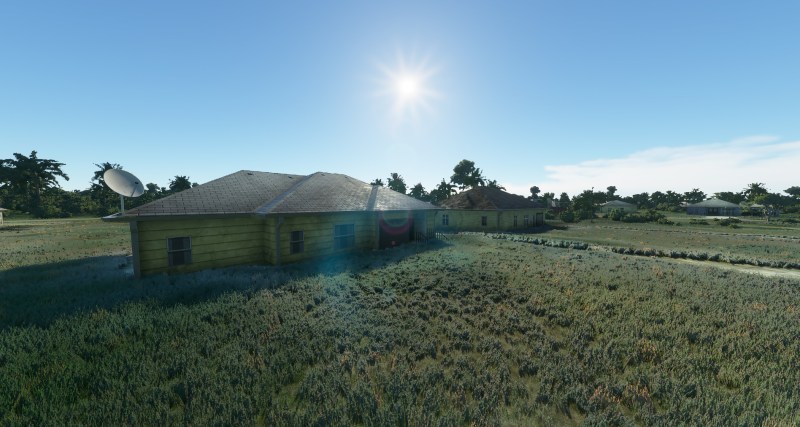 Yes, my house is here!

Other structures of the island like various restaurants, apartment buildings, and even our one lonely (abandoned) skyscraper are all surprisingly present in Flight Simulator. Though, I was disappointed that our harbor, one of the biggest in the hemisphere, was done so little justice. No 3D ships are present (just flat satellite textures, which is a running thing in Flight Sim), and not even the super tall cranes were present. Perhaps there might be an-addon later on that gets little details like this correct. But by-and-large, even my backwater island managed to get some half-decent attention here.

As for my birthplace…

Moving south to the main island of the country, New Providence, I decided to check out how my birthplace fared. This tiny island houses the majority of the population, nearly 200,000 people. It’s incredibly dense, and that surely is represented here in Flight Simulator. Its sole airport and the largest in the country, Lynden Pindling International Airport (MYNN), is a bit of a letdown, however. The terminal building is decent, but there are parts of it missing from the real thing. Hangars and FBOs that exist in real life are also missing, and there are far fewer parking spots than the real deal. If there’s any place in the Bahamas I truly expect to get an add-on, it’s here. That said, the surrounding areas are top tier 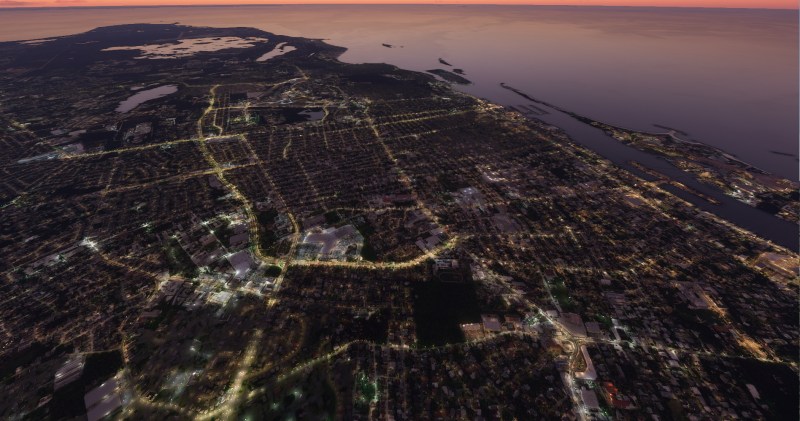 Nassau, New Providence. The capital of the country and the most populated island.

The high-end condos a few miles from the airport that straddle the shoreline are here, and the models used, are actually really good. It seems that Flight Simulator builds its autogen models according to the environment, as the style of the house models here are about what we have in real life. Again, not bad at all! What is a shame, however, are the superstructures.

New Providence is home to two super resorts, Atlantis (which you’ve likely seen if you’ve ever watched a commercial for the Bahamas), and the newest one, Baha Mar. Both of these monstrosities are present, but the models used for them are basic. It’s a little ironic considering the flat satellite texture that lies beneath the models are present. An unfortunate oversight, but again, perhaps it can be fixed later on. 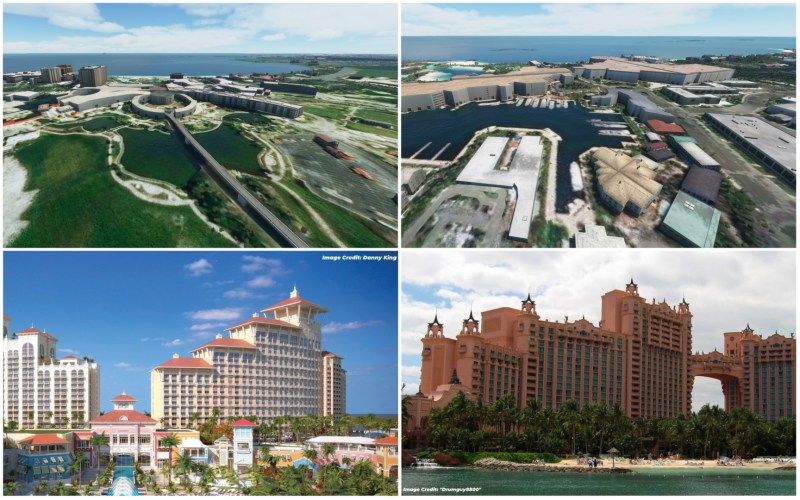 These two resorts don’t look anything like their real-world counterparts, but for Autogen scenery, it’s a so-so attempt. Licenses: CC 4.0 and CC 3.0

But to really put things to the test, I decided to visit a few of the other islands with very small populations. Most have either a few thousand people, some even just at a few hundred or less. Locally, they’re known as the “Out Islands” as they’re isolated and not visited very often from a commercial standpoint. Despite being off the radar, Flight Simulator still makes them all look good. 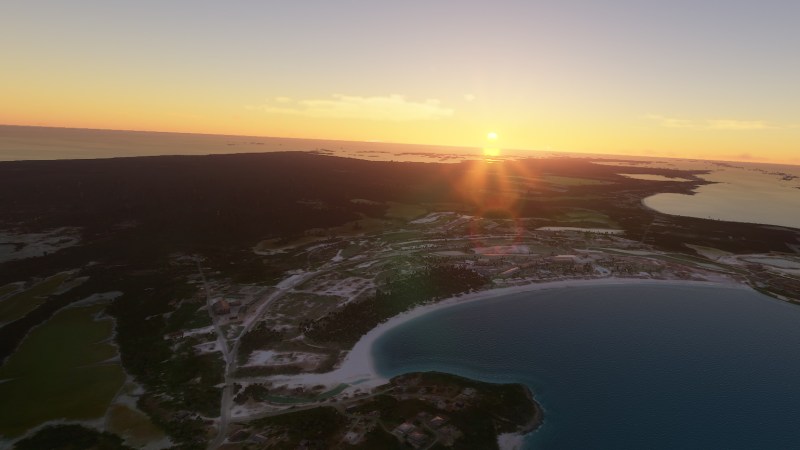 The island of Great Exuma. A sailor’s (and pilot’s) gem.

The same decent quality autogen is present, again in the correct places. While the airports are certainly a lot grander here in the sim in terms of facilities (most of these islands have terminals the size of a house), their placements are still correct. This is what really impressed me, as I expected little pockets of the planet like this to be overlooked. Yet, the tech inside of Flight Sim really has, for all intents and purposes, mapped the entire world.

If it’s on a map, chances are it’s here in Flight Simulator

So, what’s the takeaway from this? Really, I just wanted to see just how good Flight Sim would be in terms of giving all the planet “fair treatment.” And really, it has! If my tiny country can be presented this well, I’m sure wherever you live is likely just as accurate, if not more so. This truly is a feat of engineering, and I’m sure I’m gonna be grinning like a fool as I fly over my house again and again for quite some time. 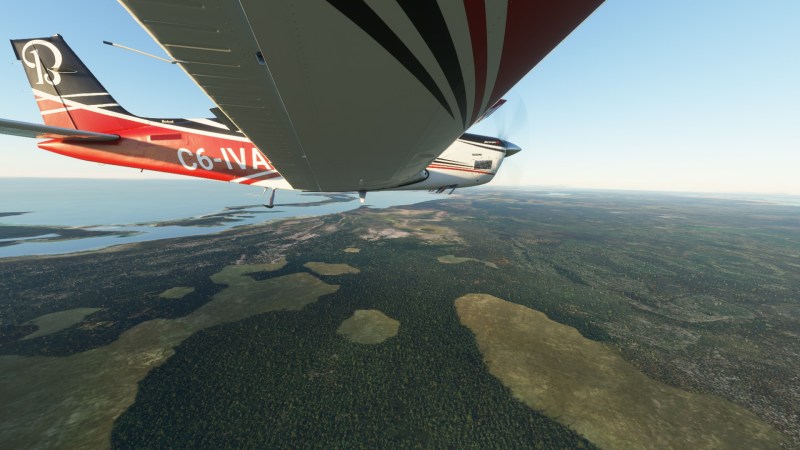 The island of Great Inagua — the most southern island in the Bahamas.

By Matt Henzel18 hours ago
Features