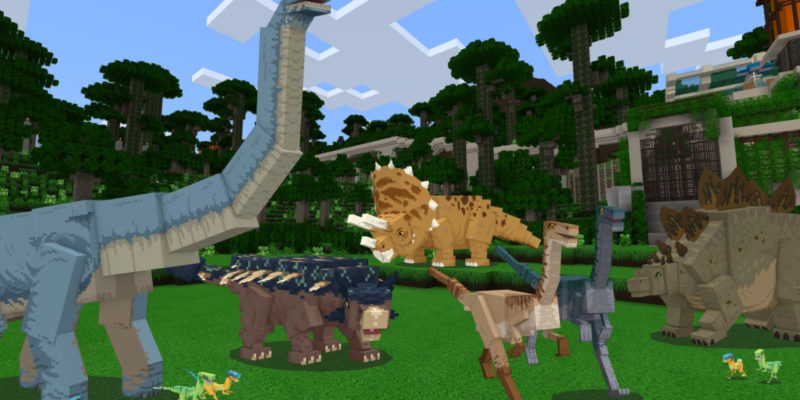 Modders have been an integral part of Minecraft since the game released, extending the possibilities that the game provides. In the past, they have merged Jurassic Park and Minecraft for players for a while. However, Mojang has now announced the release of a Jurassic World DLC pack. Mojang released a trailer showcasing the DLC in action. You may recognize the iconic Jurassic World music and some recognizable characters from the movies. It includes key features which resonate with the movies, such as the layout of the park. In addition, there are animated dinosaurs and driveable vehicles such as helicopters and trucks.

Do you have what it takes to be a Jurassic World park manager?

The Jurassic World Minecraft DLC pack is not limited to crafting and training dinosaurs, or building and managing exhibits. In fact, this DLC allows you to go on expeditions and discover dinosaur DNA. Currently, there are 21 skins available, along with more than 60 dinosaurs. The trailer showcases dinosaurs of all shapes and sizes, including the flying types. Players should also expect to see hybrid dinosaurs too. If that was not enough, you will receive a rare blue hoodie to wear on your adventures.

“The park is open!” states the DLC’s description. “Manage the dinosaur resort of your dreams-in Minecraft! Craft and train dinosaurs, build awesome exhibits and go on exciting exhibitions. How long can you keep the park running smoothly? Only one way to find out: check out the Jurassic World DLC on Minecraft.”

The release of the Jurassic World DLC is a fun new addition to Minecraft, especially for Jurassic World fans. As Minecraft continues to progress, who knows what DLC Mojang have in store next for fans. It is not the only Minecrafttitle to recently receive a new DLC. Minecraft Dungeons received a Creeping Winter DLC earlier this month.