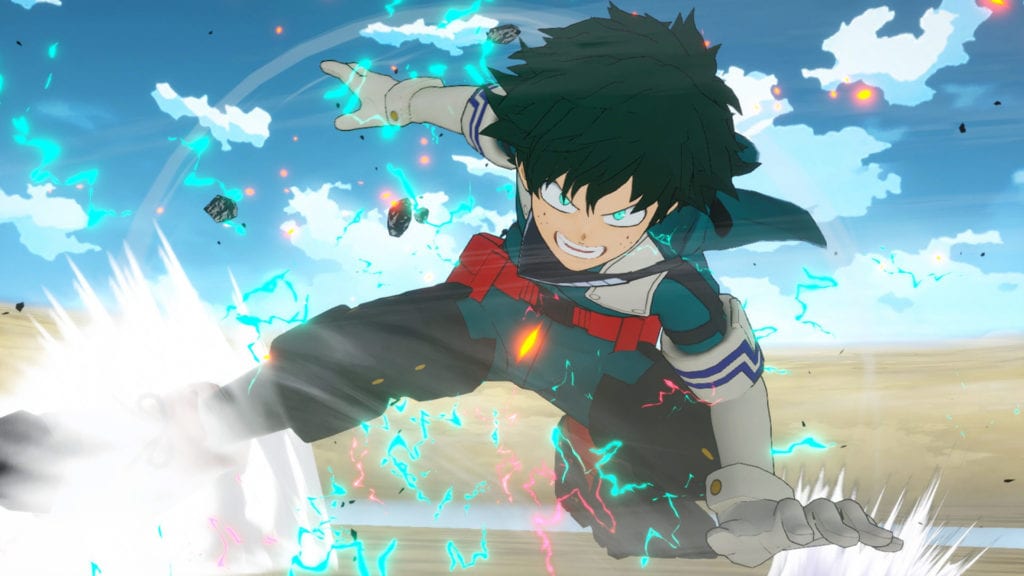 They say that the cream always rises to the top, but in the curious case of the anime fighter, the cream isn’t always so rich. The 3D anime arena fighters have a reputation of being a few iterations shy of reaching the quality standard in the fighting game sphere. All that being said, My Hero One’s Justice 2 is one such title that has risen to the surface — take from that what you will. It’s far more competent than many similar offerings, but like its contemporaries, it has only its IP to hook players in.

The new game follows 2018’s My Hero One’s Justice, coming out just as the latest season of the anime adaptation closes out its latest arc. Needless to say, My Hero Academia hype is at an all-time high, with dedicated fans eager to engage further with the series they love. In that case, faithfulness to the source material becomes a much more significant metric. If My Hero One’s Justice 2 does anything right, it’s capturing the essence of the series.

The roster of fighters has swelled to over 40, adding to the mix newer characters that made their debut in the anime. The map count sits at a solid 25. To veterans looking to pick up their mains again, you’re in luck — all returning fighters are as they were. Almost scarily so, in fact. Some have seen minor changes to their moves and Plus Ultra specials, however. Similarly, combat is virtually identical with a sprinkle of quality-of-life improvements. 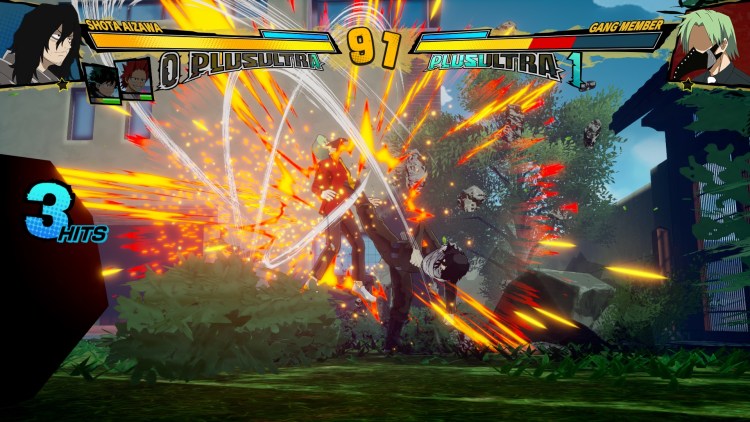 Sensei laying on the pressure

My Hero One’s Justice has always been accessible, and the learning curve has been untouched in the sequel. Combos are easy to execute and satisfying to watch, while the guard/super armor/guard break chess match is as easy to grasp as ever. Certain fighters continue to annoy in battles, but the game is rather balanced this time around. Never did I confront a fighter that I’d ceaselessly lose to. Where My Hero One’s Justice 2 shines, and where the series has always shined, is in its spectacle. The sequel shows little signs of evolution in gameplay, but the juicy combos and zany specials have never been more exciting to watch.

My Hero One’s Justice 2 is a straightforward, one-on-one brawl between two fighters and their supports. While fighters don’t have vast move sets by any measure, the game’s limited depth manifests itself in its three most significant mechanics. Guarding is performed manually and drains a refillable gauge. Blocking at the opportune time will negate all damage, unless you’re hit with a guard breaker: a slow attack that ignores the opponent’s guard. Alternatively, certain abilities provide super armor, allowing you to continue your attack without disruption even as you take hits. The game provides very clear color prompts to signify attack types, and reacting quickly to them becomes the key to success.

Combat cycles between tense silence and bursts of action; the two combatants feel each other out and attempt to predict their foe’s next moves. The game of wits ends when you catch your opponent in a series of fiery blows, stunlocking them to high hell. Each player is allowed two support characters who can help you escape stunlocks. Of course, each support has their own gauge that must be filled before usage. 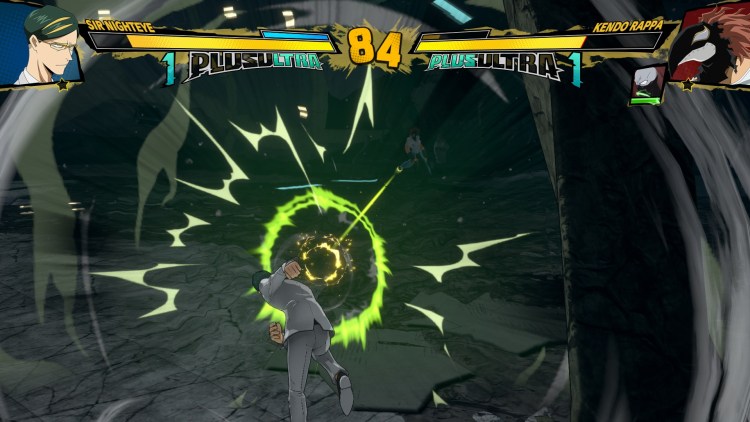 The fights keep on coming.

But the crown jewel of My Hero One’s Justice 2’s brawls is undoubtedly the Plus Ultras. As the fight progresses, each fighter fills up their Plus Ultra gauges, desperate for an opening to unleash a powerful, match-changing move. Each player has three tiers of Plus Ultra, one for every time the gauge is allowed to fill. Tiers one and two are their own uniquely gratifying barrages of blows, but tier three throws the supports into the fray. The game rewards your knowledge of the series by providing special Plus Ultras for certain combinations of characters (ex: Dabi, Toga, Shigaraki). There’s no benefit aside from aesthetics — they’re just little treats for fans. And, well, treating fans is what this game is all about.

For the love of justice

Unlike the bulk of games in its genre, My Hero One’s Justice 2’s additional features aren’t included for complexity’s sake. Many inclusions, including its cosmetics system, help players immerse themselves in the superhero fantasy. Mission mode puts players in control of their own Hero Agency, recruiting new fighters and leveling them up through its many, many missions. Each mission lays out a handful of encounters you’ll have to best in succession. Any progress made is vapid at best, but it’s a worthwhile addition to help with the mundanity. 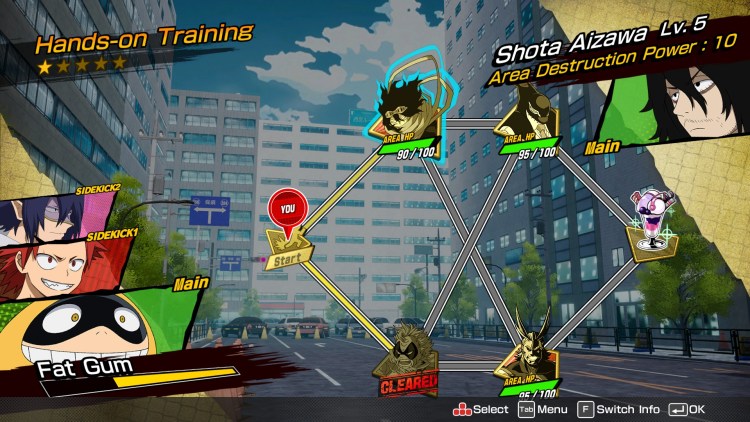 My Hero Agency doesn’t discriminate between heroes and villains, apparently.

The story mode presents a two-sided campaign (heroes and villains), spanning the Hero License and Shie Hassaikai story arcs. Interspersed between fights are comic book story panels, outlining current events and setting up the next encounter. The format comes at the cost of pacing; the presentation doesn’t serve the story well either. Oftentimes, you’ll find yourself facing the same foe multiple times in a row — the unfortunate product of an awkward medium transition. Together, both halves of the campaign have a relatively short playtime, but they unlock myriad cosmetics and currency that can be used in the mission mode.

A traditional arcade mode pits you against a string of AI fighters, free play is exactly as it sounds, and a comprehensive training mode rounds out My Hero One’s Justice 2’s list of single-player modes. Like its processor, most of your time will be spent in multiplayer ranked and unranked matches. Aside from a small amount of crashing and disconnects, there was no trouble matching up with a random player for a few rounds of roughhousing.

What it doesn’t have in depth, it makes up for with heart. My Hero One’s Justice 2 is a far cry from the esports-ready fighter some may have been wrongfully expecting. It skirts along the line between woefully undercooked and passable on the fighting game scale. But for fans of the series, you’d be hard-pressed to find something even half as faithful. This one’s for fans, by fans. 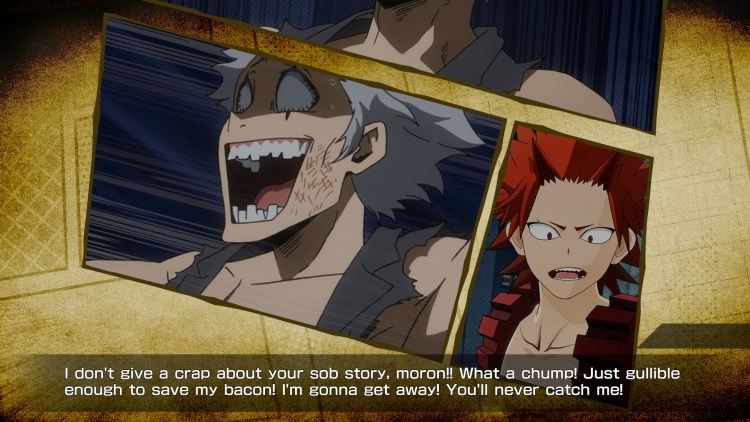 A faithful retelling, but perhaps not the most interesting

Aspiring heroes can pick up a copy on Steam.

My Hero One’s Justice 2 is a far cry from the esports-ready fighter you may have wanted. It skirts along the line between woefully undercooked and passable. But for fans of the series, you’d be hard-pressed to find something even half as faithful.