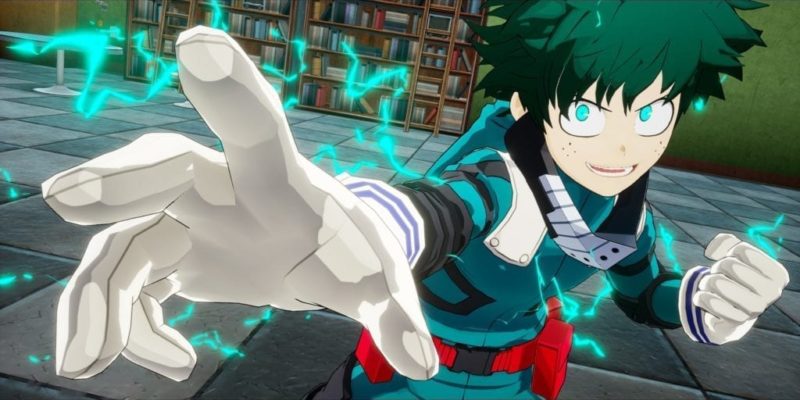 YOUNG MAN! I see that you’re interested in My Hero One’s Justice, the new video game adaptation of My Hero Academia. It’s all right now, young man! I am here… to tell you whether or not the PC port of this anime fighting game is any good.

The short version is that it’s fine. Unimpressive, as PC versions go, but I haven’t found a great deal to complain about. The long version? Let’s get started, and dive deep into this super-powered anime adaptation. 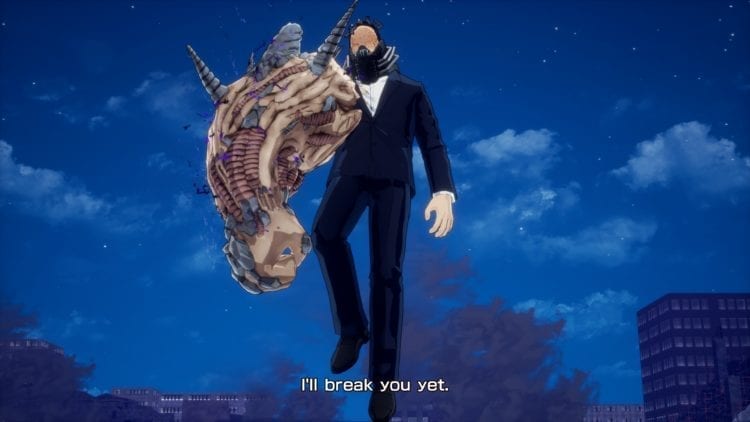 Basically me, every time I’m doing a tech review.

For reference, those are basically the only requirements on the Steam store page. They’re listed as the Minimum, but there’s currently nothing under Recommended.

So, yes, I’m quite a way over the required specs. Hell, I actually think my microwave may be over those required specs. If they’re to be believed, My Hero One’s Justice is not a particularly system-intensive game.

As is tradition, let’s have a look-see at what we’ve got to work with, graphically. 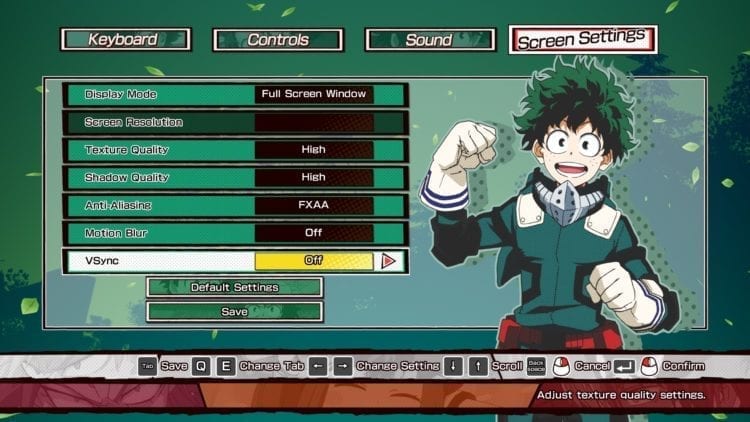 Er. Okay. So not much, then. It supports Fullscreen, Windowed, and Borderless, which I’m always happy to see. There’s also an option to switch off Motion Blur, which I’m elated to see, although in this case, it seems to minimize it rather than outright remove it. That aside, you’ve got High/Medium/Low options for Texture Quality and Shadow Quality, and Off or FXAA for Anti-Aliasing. Aaaand that’s your lot. Resolution only pops up if you’re running Windowed, so there’s no downscaling on offer in the options.

My Hero One’s Justice is locked at 60 FPS, which isn’t a big surprise for a fighting game. If nothing else, I’m glad that it’s capped at 60 rather than 30 (which does happen rather frequently with anime fighting games). It also runs at 60 FPS constantly. I don’t think I’ve seen a single dropped frame throughout the explosive, comic book-inspired action. Again, considering the specs, that’s not really a surprise unless it’s optimized really, really badly.

I’ll briefly note that most of the other options are equally sparse: Japanese audio with English subtitles is the only option (which is unlikely to upset anyone), and so, aside from basic volume stuff, all you have are the game controls.

But before we get into those, how does it vary between everything on full (except motion blur because that’s awful) and everything on minimum?

Honestly, it’s kinda hard to say. Fast-paced fighting games in 3D arenas can be a bit of a pain in the arse for direct screenshot comparisons. The fighter intros are always the same, though, as is the animation during super moves (“Plus Ultra”, I believe, in the game’s parlance). So those can give us a few close-up shots for scrutiny. 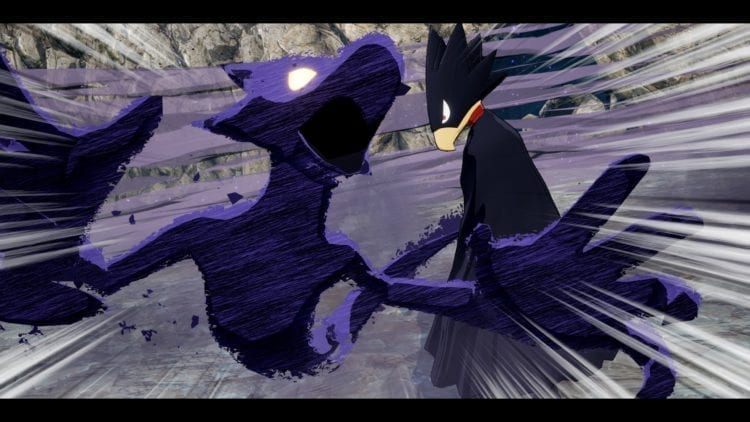 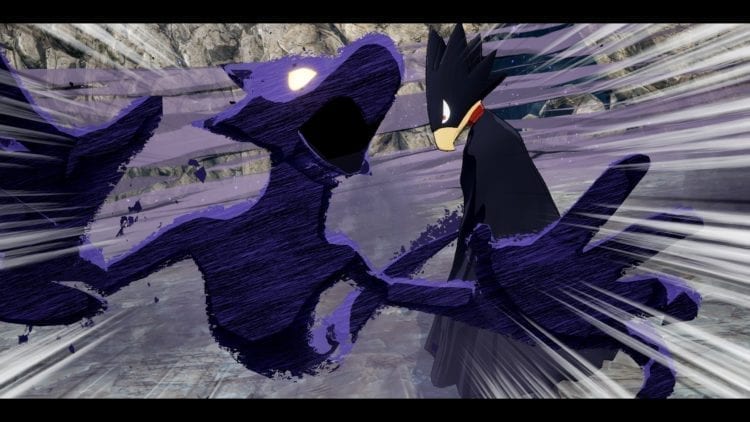 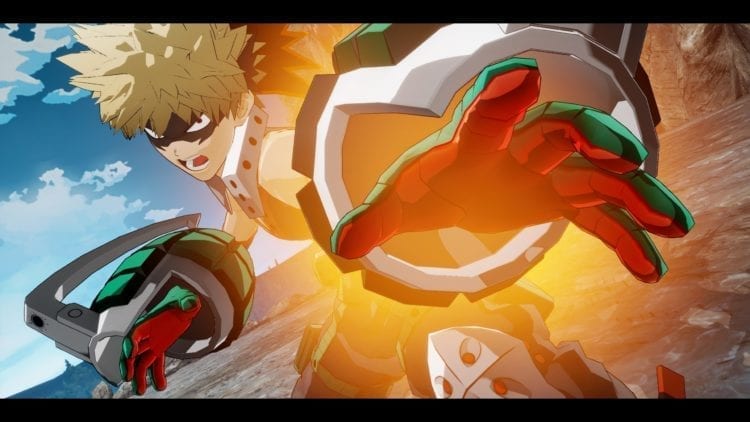 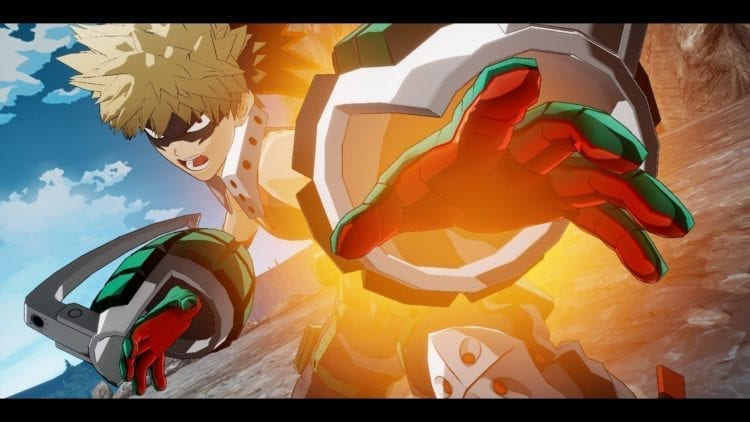 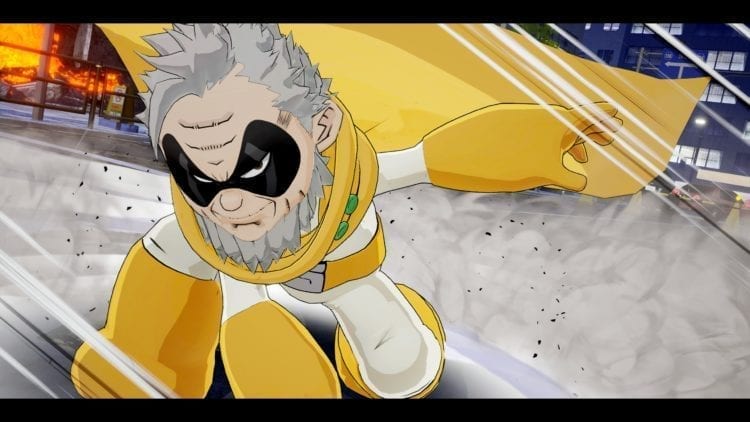 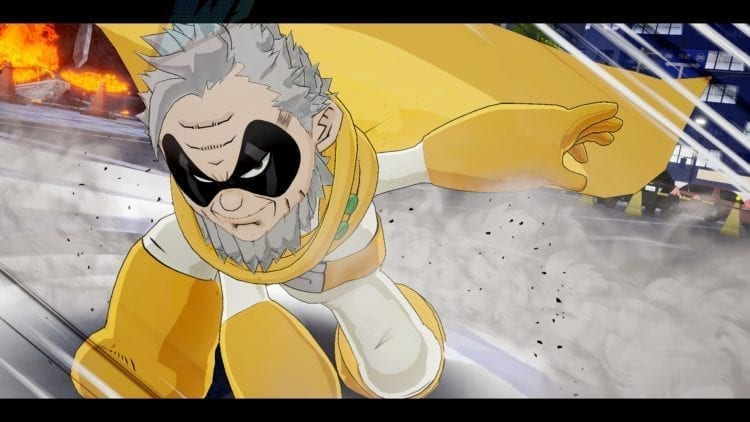 Low. (The environments are destructible, so the lack of railings to the left has nothing to do with the graphics.)

If you click and look at them full-screen – and maybe squint a little – you can see some minor differences. Anti-aliasing has some impact on the background elements, and there are slightly better shadows on the characters on High. But I can’t see a great deal of difference otherwise.

Honestly, most of the “Ooh” factor of the graphics is down to the effects, which aren’t really impacted by the graphical settings. Attacks trigger spectacular bursts of light or huge bits of comic book text.

These are not stunningly beautiful by any stretch of the imagination, but they’re not half bad to look at. Some of the screenshots peppered throughout this article are on full graphical beauty, while the rest are on the bare minimum. Good luck telling which is which.

First, have a look at this: 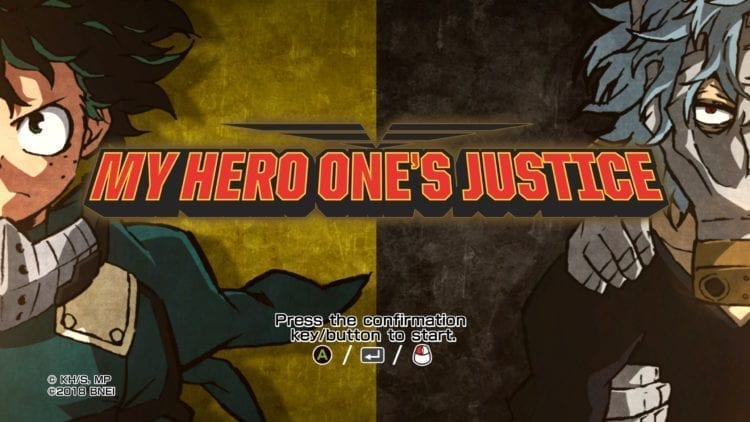 That’s right! The main menu makes note of keyboard, gamepad, and mouse! Admittedly, the mouse is only usable in menus, but hey. It’s something.

It’s a fighting game, so the keyboard controls aren’t likely to be your first choice, but there are actually some neat concessions to PC users in there. While the controls are fairly basic (move, dash, block, an attack chain, and two other types of “special” attack), a lot of the other actions – your Plus Ultra attacks, and so on – are triggered by holding Guard and pressing another button, or a combination of multiple buttons. On keyboard, you actually have the option of “shortcut” keys for performing all of these moves. By default, they’re bound to the number keys, but you can stick ’em wherever you like. 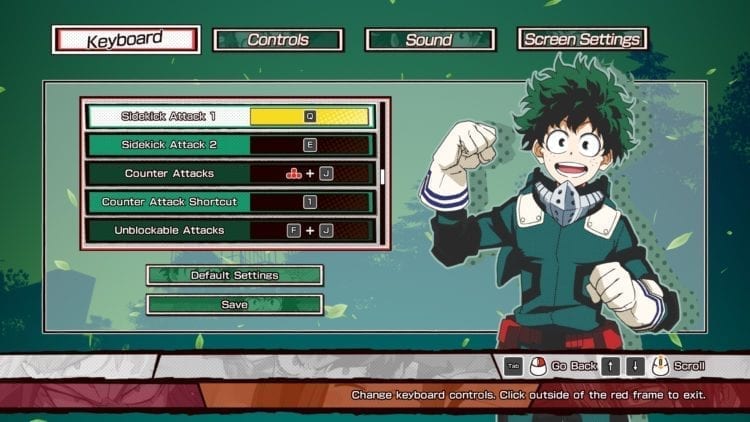 Automatic camera movement also means that you don’t need to have one hand on WASD for movement, one hand on whatever you’ve bound the attacks to, and a magical third hand on a third set of controls to rotate the camera. The automated camera isn’t actually that great, but it does mean that My Hero One’s Justice is indeed entirely playable on keyboard. Y’know, if that’s something you really want to do.

Two downsides, though. First, the gamepad prompts all show the Xbox buttons, and I cannot find a way to make it show PS4 prompts instead. This might be a “me” issue; Steam has historically been a bit wibbly with detecting whether or not a controller is PS4 or Xbox. Still, the usual fixes haven’t worked, and I suspect that there simply aren’t any PlayStation controller prompts in there.

The other downside: regardless of whether you’re using mouse and keyboard, all in-game prompts related to actual gameplay (the move list, for instance) show the Xbox controls. You’ll be told that the X button is how you attack, for instance, even with no gamepad plugged in. It’s slightly odd, especially because the menu navigation prompts instantly switch between gamepad and keyboard depending on what you last used. 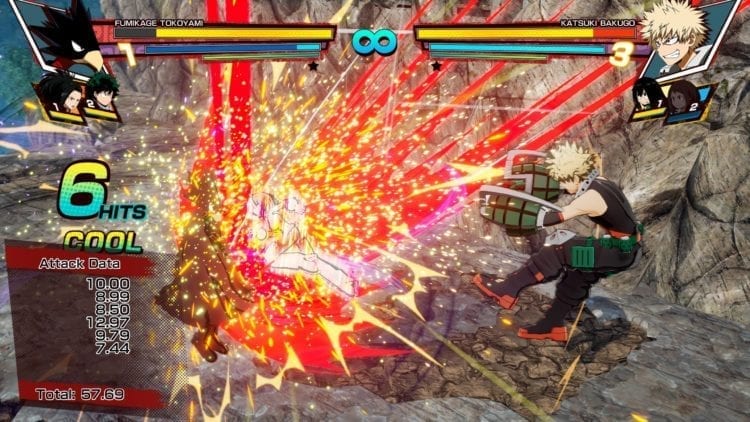 I did say it had flashy effects no matter the graphical settings, right?

I’m less certain about the netplay. I’ve managed to find exactly one game since launch (which, in fairness, was about an hour before time of writing), after being told almost instantly that no rooms or matches were found. On the other hand, the one game I did find ran smoothly. There was a minor framerate drop during the character intros, which was likely down to the connection. But other than that, it was as smooth and lag-free as playing against a CPU — a CPU that was better than me and stomped me into the ground.

As such, there may be some matchmaking issues, and “one match” isn’t a huge sample size for testing the netcode. The fact that said match went just fine is a pretty positive indication, though. 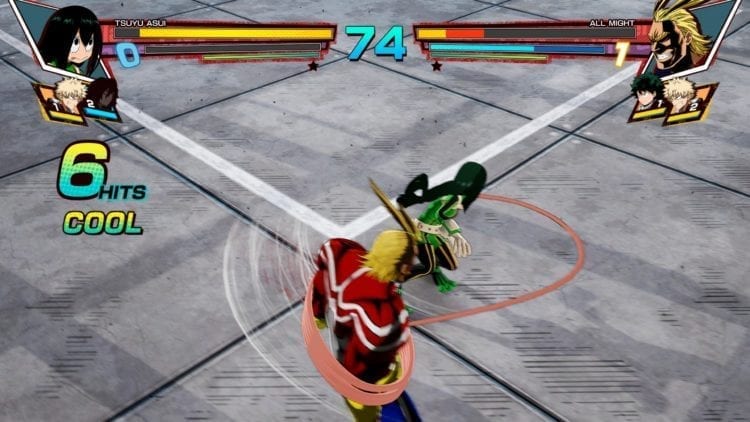 More of a tongue-lashing than I’ve given the game, I think.

My limited time with My Hero One’s Justice hasn’t all been sunshine and superpowers, though. Even in Borderless Windowed mode, alt-tabbing caused some minor issues, and the game froze up for 5-10 seconds at a time on occasion. Over the course of about two hours of play, that’s not great, although I haven’t had this happen since launch.

There is one considerably more sizeable problem, though: the loading times are gargantuan. Going from the main menu into a sub-menu like Story Mode took six or seven seconds, and going from the menus into an actual bit of brawling could take 10-15. Not only is this bordering on ridiculous, it absolutely kills the flow and makes going between the various modes (or even playing for extended periods) more agonizing than it should be.

This could possibly be fixed by installing on an SSD, or defragmenting the folder, but this – at least – doesn’t appear to be a “me” problem. I’m seeing more than a few reports of ridiculous loading times, and many of those are far in excess of the 10 seconds I’ve noted here. And frankly, you shouldn’t have to install a not-particularly-intensive port of a console fighting game on an SSD just to make loading times tolerable.

That aside, though, there really isn’t a great deal to complain about. It’s a fairly bare-bones port, yes, but it’s one that hits most of the criteria it needs to, and it’s roughly what I expected. 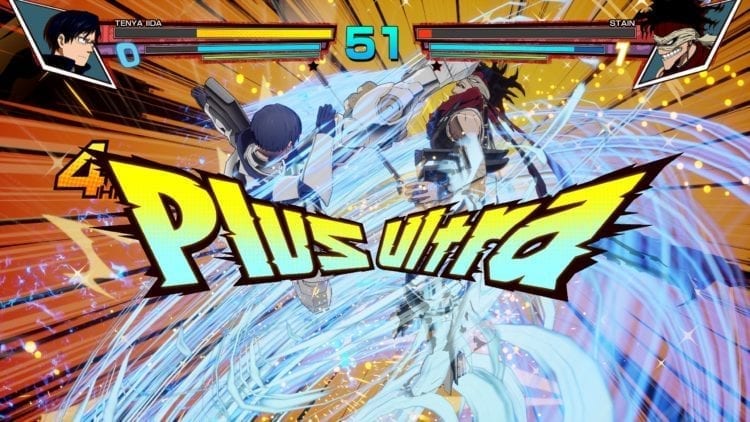 The game itself seems okay-ish, but it’s definitely one for the fans. The story starts off about halfway through the anime’s second season and not a great deal of time is spent on exposition or cutscenes. As someone who’s only watched the first season, I was quite thoroughly lost within about five minutes.

In terms of gameplay, comparisons can most easily be drawn to the Naruto: Ultimate Ninja Storm series. Both are fairly simple fighting games with free-roaming movement in a 3D environment. Both rely heavily on you knowing the characters to understand what’s going on, both for the story and for the actual combat moves. But while Ultimate Ninja Storm has a half-dozen games to polish up its character roster and mechanics (not to mention about 70,000 manga issues to draw from), this is a first attempt at bringing My Hero Academia to the PC.

While it might not have the most depth, My Hero One’s Justice does have a pretty decent amount of breadth, going beyond a fair few major fighting games I can think of. Barring Story Mode, Versus, and Online Play, you’ve got Arcade and Mission modes, giving solo players more ways to fight their way through this universe.

Not a strong recommendation for this port, then, but a bit of a shrug. If they fix the loading times, I’ll have very little to complain about and it’ll honestly be one of the better anime console conversions I’ve seen. As long as you’re not expecting a top-quality PC version optimized for play on this system, you shouldn’t be too disappointed.

By Blake Grundman4 days ago
Tech