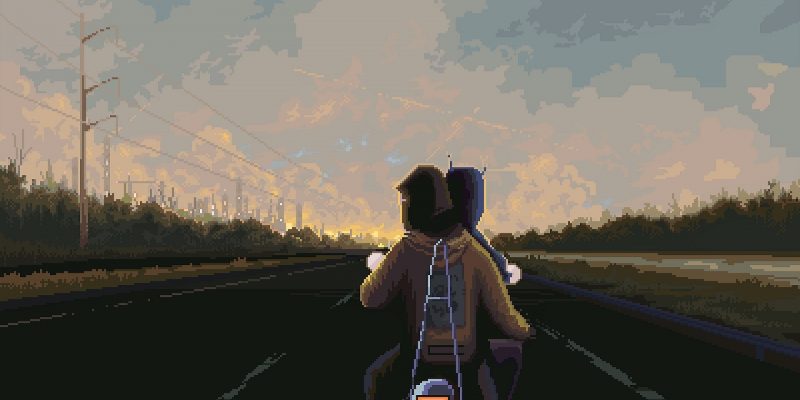 I wasn’t sure what to expect when I sat down to play Norco at the Tribeca Games Festival. What I got was a surreal sci-fi southern gothic with a healthy heap of weird. It’s a little tough to describe this point-and-click adventure game without raising more questions, but I get the feeling that it is designed that way on purpose.

The game provides a brief choose-your-exposition introduction. It lets you decide why the main character, Kay, left her hometown of Norco, a crumbling Louisiana suburb located near a toxic industrial swamp. After being estranged from her family for over five years and escaping some kind of terrible incident in New Mexico, she finally returns to her childhood home. During Kay’s time away, her mother passed away and left behind a mystery which Kay tries to uncover while looking for her missing brother.

The story slowly reveals itself as you examine different objects and talk to characters. Even then, you’re only getting part of the picture. Things play out almost as though the character is suffering from amnesia. There’s even a ‘mindmap’ that fills in with memories as you examine photos, toys, and books. Recalling these memories involves multiple-choice internal monologues that loosely keep track of the plot while revealing Kay’s history and attitudes towards her family. 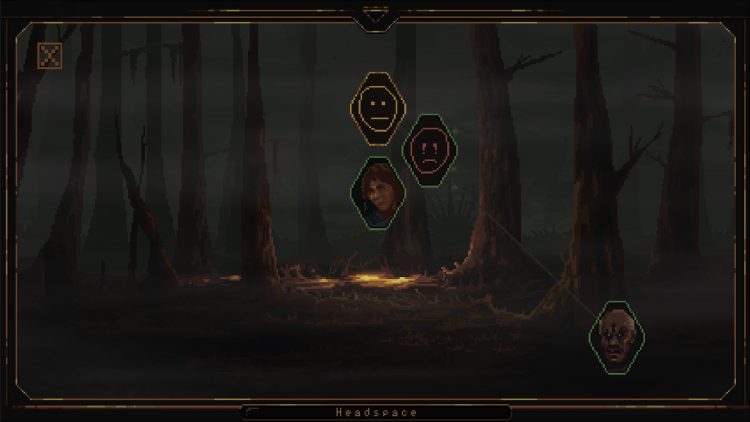 Piecing your history together one memory at a time.

For example, an object might remind her of past travels. First, you click on a crudely drawn face that represents your memories, then choose to think about who you were or who you are. Reminiscing leads you to think about traveling, and you can choose to remember three different trips. I got the sense that there was some sort of trauma, or at least a strained relationship between the siblings. The brother is represented by a crying sad face while most other characters, including the mother, have artwork that matches the rest of the game.

For the most part, it seems like the mindmap acts as a kind of quest journal since it doesn’t appear to have any major bearing on the game. It’s not as though one thought provides insight that leads to another. Clicking on the memory root again brings up the same dialogue decisions, and you’re free to repeatedly click or ignore them as you see fit.

Welcome back to Norco

I don’t consider Norco to be a post-apocalyptic sci-fi game. The dark atmosphere, gloomy swamp, and industrial towers, however, might lead you to think otherwise. As it turns out, a near-future crumbling town is almost identical to photos of many of today’s disappearing communities, with the main difference that real life doesn’t have adopted runaway androids with starry faces hanging around in the backyard. Not yet, anyway.

The android, named Million, was rescued by Kay’s family when she was a child. After the mother’s passing, it pretty much hangs around repairing the pickup truck and motorcycle. It’s the first character interaction I came across, which included my first fetch quest – a fuse for the motorcycle – and a clue about how Kay’s mother was obsessed over a mysterious research project before she passed. 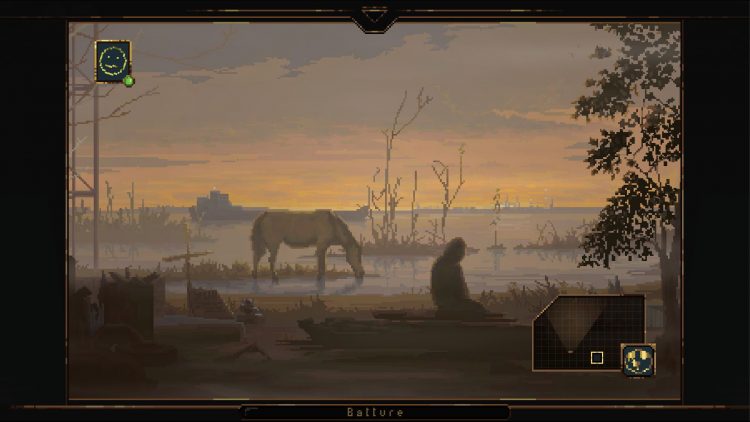 The Batture wetlands. It’s not the end of the world, but I think you can see it from here.

Generally speaking, Norco is very text heavy. There’s no voiced dialogue and little in the way of animation, much like a ’90s era 16-bit point-and-click adventure game. Except, you never see the main character walk from place to place. Instead, choosing a new location simply shifts the scene. Clicking on objects brings up icons to either examine or interact with them. There’s no inventory system, even though you go on a couple of fetch quests. Talking to characters usually brings up a lightly-animated portrait. However, indie developer Geography of Robots makes this kind of retro-minimalistic style work with some creative zooming and dialogue decisions.

I found that the game was pretty intuitive for the most part. The only exception was when I decided to fight the town bully instead of trying to sneak or talk my way past. Some shapes suddenly appeared on the screen, lit up, then disappeared without explanation. It was then replaced with a fast-moving dodge meter that I kept failing. The bully kept landing punches on me until I was finally defeated.

Fortunately, there doesn’t appear to be a death or fail state. I simply had to find a different way to get past him while word got around town that I got beat up by the town dirtbag. Later on, I’d have a quick laugh about the incident while talking to a shopkeeper, which made it clear that choices impact the story in some subtle ways. 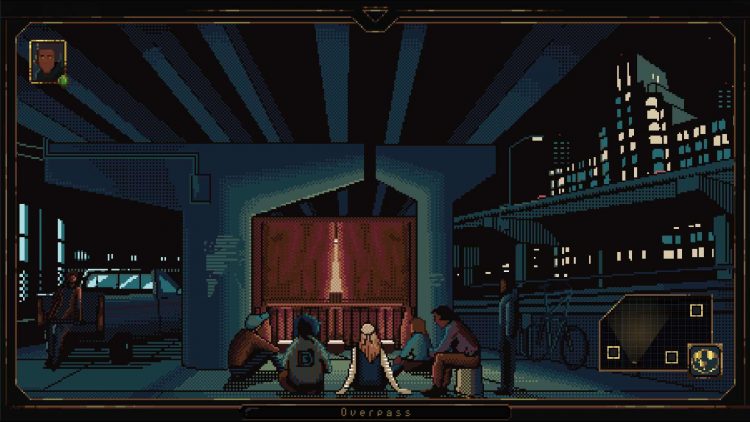 An entertaining puppet show beneath the overpass.

However, it’s worth noting that not all of the game is dedicated to chasing a mystery. There are a few fun, tangential points that appear to simply add ambiance. One is watching a couple of kids argue with each other about playing with a turtle that may have been swimming in polluted waters. Another is potentially impacting a movie script with some fake local slang. At a different point in the game, the player is treated to a puppet show that takes place under a highway overpass.

My favorite was the tourist group who paid a fake tour guide who didn’t show them anything. These are mixed in with eerie, sometimes nonsensical elements, like a wanderer sitting by the swamp’s edge next to a gravesite and his horse. Also, the Virgin Mary statue sitting on the front yard of Kay’s house has some sort of computer or android interface hidden inside of it for some reason. 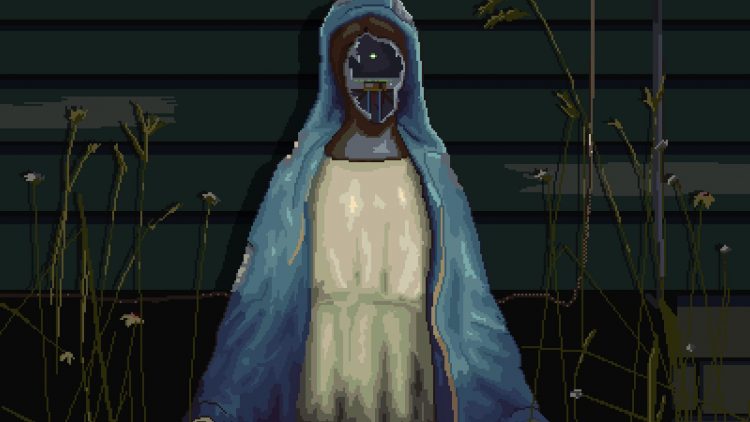 The most prevalent question in Norco might be “what is going on here?”

Shifting to the Big Easy

Just as the mystery regarding Kay’s missing brother starts to take shape, the demo shifts points of view, location, and time. It wasn’t immediately clear who and where I was or why I was taking some sort of memory test with unspecified rules, but the events take place several weeks before Kay returns home. It soon became clear that I was playing as Kay’s mother, Catherine, who might have been suffering from disturbing hallucinations such as turning into a zombie. 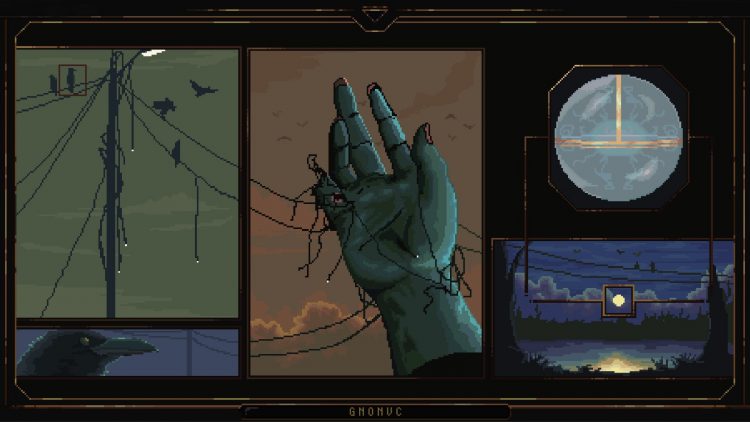 Turning into a zombie after seeing strange visions in the sky might be the most normal think to happen in Norco.

However, not a lot of time is spent on exploring the details of her medical condition. Instead, I ended up following some kind of scavenger hunt work app that took me to the French Quarter in New Orleans. The mood of the Big Easy is noticeably different from Norco, marked by college kids, a shady and insanely hostile Santa Claus, and a hot dog vendor who is selling food from pre-hurricane Katrina days. It took me a long while to figure out how to get into the curio shop with the locked door, but I eventually found out that I need to hook the hot dog vendor up with a particularly daring customer with an iron stomach to learn the secret knock.

Then things quickly started to descend into a new kind of weirdness, starting with a strangely judgmental and cleanliness-obsessed fortune teller who referred me to someone named Dallas. Talking to him provided just enough money for a ride across town to complete another job. I ended up at a paper supply store with a giant plant that had a huge, crazy-looking bird on top. This bird had human teeth, and congratulated me for making it. This odd event concluded the surreal, and at times unnerving, demo.

Norco can be wishlisted on Steam, where it currently has a cryptic release date.