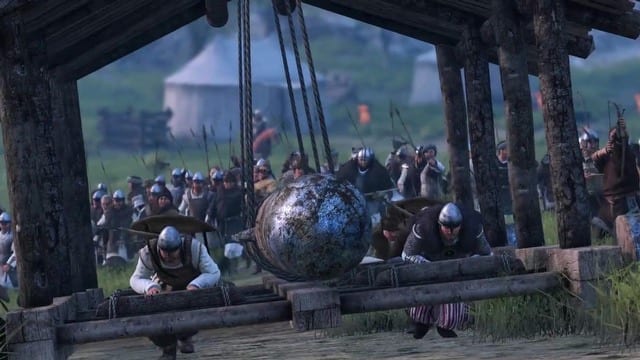 TaleWorlds Entertainment just posted a new update on Mount & Blade II: Bannerlord, continuing the first post on sieges. Unlike the previous entry in the franchise, Mount & Blade: Warband, there is much more to sieges in Bannerlord than simply waiting until the attacker is ready to initiate an assault. Bannerlord will provide a back-and-forth between the besieged and the besiegers, each one trying to gain an advantage over one another. This new update sheds light on what players can expect from the gameplay in that sense.

The game provides players with a relatively high level of access and visual representation of the siege. This helps make the initial stages of a siege more engaging to both attackers and defenders. When a settlement is under siege, the besiegers set up a camp, with individual tents for each attacking lord. Both sides are then able to construct siege engines to use in the bombardment phase, which takes place in the world map. The final assault takes place in a separate scene. The video below might be a bit outdated, but it features some of what the Bannerlord developers are referring to.

Settlements have a limited number of slots, and players can select which siege machines to build and in which order. This phase of the siege deserves some tactical consideration, since the machines will automatically target the closest enemies and you can’t direct their attacks. This refers mainly to ranged siege machines such as catapults, trebuchets, and ballistae. On the other hand, the siege towers and battering rams only come out to the front during the assault phase.

Each of Bannerlord‘s ranged siege machines operates differently, with varying levels of success depending on what the player is trying to achieve. While a ballista may excel in whittling down enemy troops, they’re pretty much useless against walls. Trebuchets, meanwhile, are useful to dominate the besieged opponent’s machines and walls, but they are expensive. It will also be possible to refrain from building any machines at all, instead trying to starve the enemy out through scorched earth tactics and cutting supply lines. Of course, the besieged can also hunker down and wait for the cavalry to come from the other side of the map.

You are the Bannerlord

Mount & Blade II: Bannerlord will offer players complete control over the deployment of siege engines on the campaign map. The game shows hit point bars for siege engines and wall sections, so that players can see how the battle is going. This may help you decide, for example, to pull damaged machines back to the reserve, then put them back to the frontline when needed. It makes the siege gameplay much more interactive and tactically interesting, aiming to engage players from start to finish. It’s not just a case of bringing greater numbers and waiting for the assault to start.

There’s still no release window for Mount & Blade II: Bannerlord. However, a multiplayer beta is currently happening, and the game will be playable at Gamescom. You can follow it on Steam, Facebook, or Twitter for more news from TaleWorlds Entertainment.

What do you think of the siege gameplay of Bannerlord? Is it the right combination of tactics and action? Leave your comments below and tell us what you think!